Hello. And life goes on. I'm holding off going to the shops, though now is probably the best time to go, there will be stuff marked down. I don't need anything at the mo, cat food stocked up, freezer stocked up, and I've enough Brussels Sprouts, potatoes, and carrots to last another week. I had a plate of veg this afternoon, never get bored with that. Sprouts and broccoli drizzled with toasted sesame seed oil, deeeelishhhh.
Caught a glimpse of a fantastic sunset the other night, view from my bedroom window. A few minutes and it was gone. Twas a beautiful deep red, the colours never fail to amaze me. 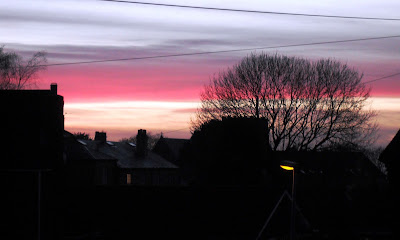 This was my lunch yesterday. The last of the yellow sticker mushrooms and chopped onions, half a tin of chick peas, and an egg scrambled into it. Spices, Danish blue cheese, and cream cheese with garlic. I had it on a microwaved spud. There was enough for two portions. Cheap and bloomin lovely. 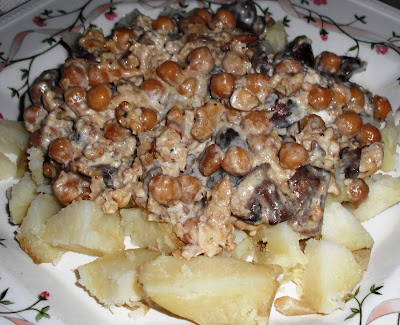 Doggy walk this morning, this is Jade. She is a sweetie though you wouldn't have said that if you knew her when she first arrived from a rescue. She had a rough start in life and was very wary of people, leading to bouts of aggression. Both the gardener and the handyman were bitten, but her new owner persevered and she calmed down when she realized that she was safe in her new home.

I am walking her on alternate days for the next three weeks while her regular dog walker is away on holiday. He takes her all over the place, down tracks, across fields, she is allowed to run free with him. I won't be letting her off the lead, although she knows me I don't want to take the chance of her running off. We have a very fast march around the village, stopping to talk to any other dog owners we meet on the way. She is fine with people and other dogs, no sign of aggression now. 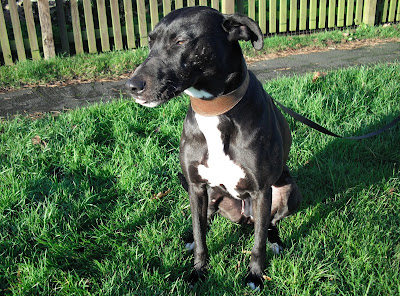 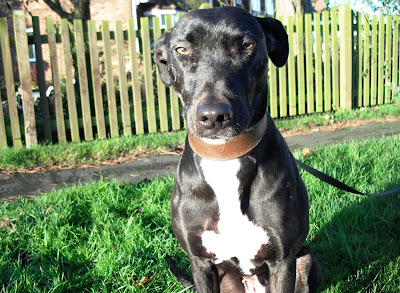 Bugsy is still eating, but getting a bit picky. It's good that he chunters and moans about not having the right food, at least he is interested in it.

Thank you all for commenting on the previous post, a lot of  opinions, and stories on how you spent your Christmas, and what it means to you. I think it's a topic which will emerge year after year. As people grow older and families grow up, ideas of what Christmas is about are bound to change. I liked it when I was young, but stopped liking it when I was in my late twenties/early thirties.

I had a very late lunch today, so I'm just about ready for a small meal. Don't need a full dinner, so spaghetti hoops on toast will be enough.

The computer is playing up a bit, I uninstalled Skype because it was slowing things up and I don't use it, but I must have done something wrong because now I can't access my favourite sites from the top bar. Will have to look into it, or get the little computer out. Bloomin pain.

Thanks for popping in. We'll catch up soon.
Toodle pip.
Posted by Meanqueen at 18:42