A good idea, and new equipment.

I'm here, I took a day off because things have been a bit hectic here. Yesterday I did a talk, well not really a talk, more a chat with three people. It was at a Village Hall where they are trying to get a crafty group going. I took some of my arty and crafty works, each piece was inspected, we discussed how I made them, and hopefully they went away with some ideas. And we had coffee and scrumptious home made cake. 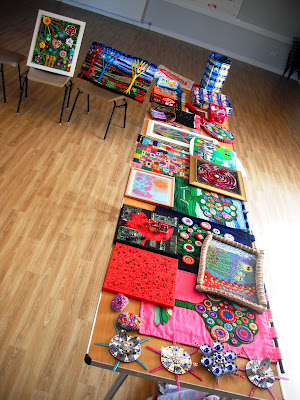 When I was in town last week I spotted this wall of cd's screwed to an iron railing outside a drop in centre, which is also a charity shop. Don't you think this is a good idea. Looks like they have started at the bottom of the gate on the right, I'll have a look to see if any more have been added when I go to town later on today. 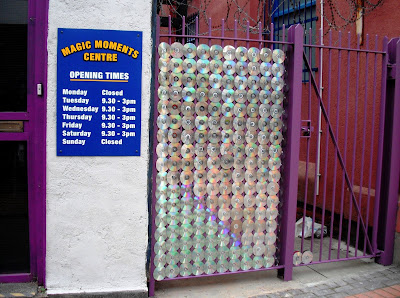 I am having an equipment update, a new computer man was recommended and I thought I would give him a try. I haven't done anything with my computers since Mark left about six years ago, now is the time to sort things out before they conk out altogether. Keith has connected up a new computer which he has built himself, in place of the old Dell which is about 15 years old. He has taken that away and will download all the files on it to be installed on the new one next week.

I still have the little Samsung to keep me going, which he has tweaked to go a bit faster, but apparently there will be problems with that in January when Windows 7 ceases to receive any updates. I'll keep my eye on it and see how it goes. After all I have been using XP on the big Dell for a couple of years with no updates, and it still works, of a fashion.

The new one has Windows 10, so something else to get used to. I've got plenty to do today, so I'll quit waffling and get on with things. Toodle pip.  ilona
Posted by Meanqueen at 09:47