Hello. It's Sunday just after midday.
Yesterday was an early start, woke at 4, got up at 5, went for a walk at 5.45, back for 6.45. Not so early this morning, woke at 6, got up at 7. A long chat with sister before breakfast. On the computer, now need to get off it so I'll knock this post out and close down.
An update on the sweet tooth situation and making treats last. The egg custard tarts have gone, four in four days. The muffins have gone, I ate one whole when I got back from shopping on Friday, and cut the others in half so as not to pig out on them. It worked, they lasted a bit longer.
I have four scones left, so they will last eight more days when cut in half. There are two and a half slices of fruit loaf left. I cut a slice in half because two would have been too much, and one would not have been enough. One and a half slices, just right. I have saved the best till last, and because the caramel slices have a longer date. Three slices left, so, cut in half they will take me to Friday if I eat a piece today. Or Saturday if I don't. Then I might think about going shopping again. My self discipline is getting better. The less sweet stuff I eat, the less I want. 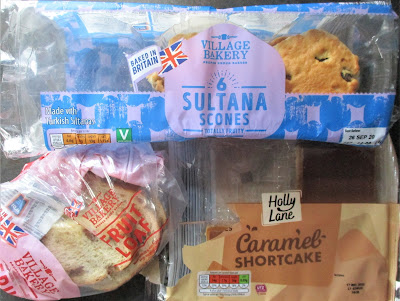 I made some more bunting. Didn't have enough stripy fabric to do the whole strip, it was a windbreak by the way, so I did alternate plain blue flags. 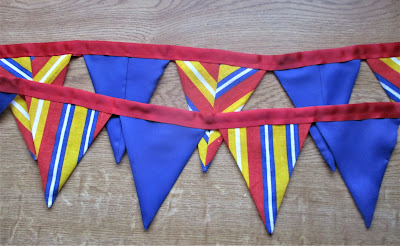 I went round to Angela's last night, she wanted some help with bunting making. She has seen the video but wasn't quite sure about some of the details. We started from scratch and made the templates, then cut the fabric after deciding which colours she wanted to use. She had the machine out and sewed the seams, I ironed, now all she has to do is finish it off. We had a cheese sandwich and a glass of red wine. A very nice evening.

At last I have sorted my pins out, throwing away all the bent ones, and making a new pin cushion. The old one was too small and the pins too cluttered and close together. This one is better, now I can get my finger between them to pull them out, and I know they are not bent. Bliss. 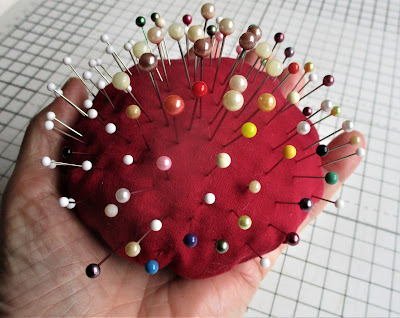 Hey, look what I found in a skip the other day. It was full of builders rubble with this lamp shade sitting on top of it. The house was empty, someone is doing it up in between tenants. It's really big, 18 inches across, and made of metal so quite heavy. Not sure what I am going to do with it. I may keep it because a light inside would throw out patterns on the wall. 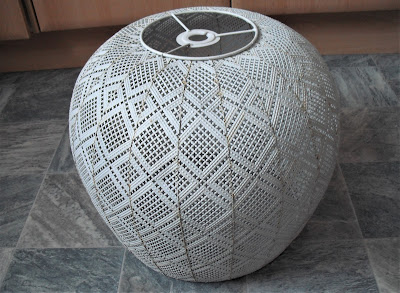 That's it for now. Time for lunch. Thanks for popping in. Toodle pip.  ilona
Posted by Meanqueen at 12:48 11 comments:

Hello. It's crazy windy out there, I've just taken Billy dog for a walk and we nearly got blown over. Now the sky is going a darker shade of grey, I think a storm is brewing. The veg is steaming in the pan, and will be ready in fifteen minutes. Carrots, potatoes, broccoli, and Brussel Sprouts tonight.
I haven't tackled the video editing yet, I decided to make another one instead. I will play around with some old videos then it won't matter if I make a mess because they are already out there on yooootooob.
A new brand of coffee and some more bunting on this one, with my co star Mayze
I will leave you to it, I need to pop into the kitchen to check on my dinner. Thanks for popping in, we'll catch up soon. Toodle pip.
Posted by Meanqueen at 18:56 8 comments:

Walking away from a problem

Hello. I had a longer video planned for today. I recorded it, watched it, thought it was ok, then had second thoughts, something needs editing out. I haven't edited a video before. There is a programme on my computer which can do that, so I thought I would give it a try. Oh my, backwards and forwards, find the bit I want to cut out, tying myself in knots, utterly baffled. The sun was shining and it was mid afternoon, I had to close down the computer and get outside. I need the sun on my face.
I made this little video while walking around a field edge.
I'll sort out the other video tomorrow. I may just re record it, that would be the simpler option, and a lot quicker. I need to get the hang of editing though. I'm a bit slow at learning new things, but once I have done something a few times, it eventually sinks in.
Six miles done today, it was a lovely walk. I felt good as I was striding along. I always feel energised when out in the open air. Only a few more days to the end of the month, and the nine month marker for the walking challenge. the target is 750 miles, I have gone past that now.
That's all for now, we'll catch up soon. Toodle pip.  ilona
Posted by Meanqueen at 20:59 3 comments:

Hello. It's been a miserable day today, different from the sunshine of yesterday. I did my usual walk, five miles, and my friend Angela decided to come with me. She didn't have anything pressing to do at home, and it made a nice change to have some company.
We found a lot of black bin bags dumped in the wood, full of cannabis plant root balls and compost. There must have been at least 30 bags or more in three separate piles. The Council have put, 'No vehicles' signs up at each end of the track, but that doesn't seem to deter the fly tippers. The only way to stop it is to install gates, or cameras. I don't think that will happen.
It is pheasant rearing season, they are running across the fields, sometimes taking flight if they can't run fast enough to get out of the way. The shooters will be out in a few weeks, ready to blast them out of the sky. Cruel nasty horrible people. 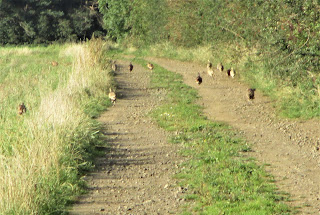 We walked through the playing field and did our exercises on the outdoor gym. Well Angela did, I just played on the zip wire. Help, I can't get off it. 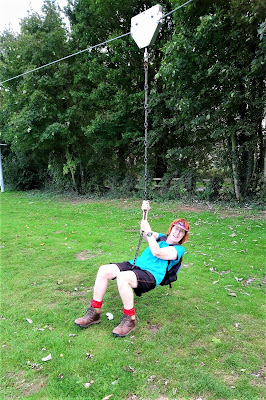 Today I have been making more bunting. Now I'm going to read some blogs. I don't think the weather is going to be very good tomorrow.
Thanks for popping in. Toodle pip.  ilona
Posted by Meanqueen at 20:04 5 comments:

You could make some bunting.

Good evening. Someone asked me if I could make a video about making bunting, so here it is.
It's so easy, why not have a go and make some for your house or your garden. Let me know how you get on. Which colours you chose, how long did you make it, how many flags, and where is it hanging?  If you have made bunting before this will be easy for you, if you are a beginner give it a try.
Tatty byes and toodle pip.  Thanks for popping in.  ilona
Posted by Meanqueen at 20:58 2 comments: