Here is a news item that you might be interested in. Do you know where your next meal is coming from? We have always imported a lot of our food from Holland. That might not be possible in the future. There are plans to close up to 3000 farms in the Netherlands. The Government will buy them out because they want the land. If you are interested in the full story read it here in The Telegraph.

If you can't be bothered to read it, watch Hugo Talks video, where he explains what it's all about.

This is a world wide operation. The same thing is happening everywhere. If you can control the food you can control the people. Now is the time to become more self sufficient. Grow your own. Spend cash. Shop locally where you can. Support your community. Swap and barter goods and food. Learn how to make do and mend. Look after your own health and well being.

Thanks for popping in. Toodle pip.   ilona

Posted by Meanqueen at 12:23 No comments:

Email ThisBlogThis!Share to TwitterShare to FacebookShare to Pinterest
Labels: food

Where's Oscar? There he is. Surveying his Kingdom, Keeping a look out for any cats that dare to invade his territory. 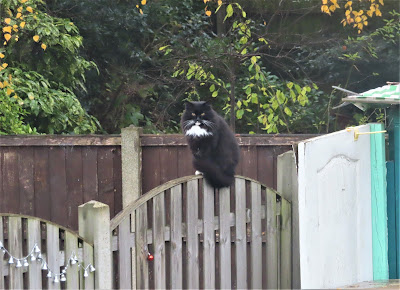 He sometimes stays indoors overnight, now that the weather is a bit colder and a bit wetter. He has a bed in the stock/spare room. This morning he was waiting for me to open the back door at 8am. I don't have a cat flap there. Cats can get into the passage if they need shelter and food, through the cat flap in the outside door. There are three litter boxes inside the house, but I don't think he knows what they are for.
Mayze stays inside most of the time. She likes the warm. Mau Mau is sleeping in the Summer House. He comes in for meals, but won't venture into the house. A neighbours cat visits from time to time when he feels like it.
Time for breakfast. Catch ya later.  ilona
Posted by Meanqueen at 09:53 No comments:

I spy a sunset through the trees

Here's another, fresh out of the oven. Coming thick and fast now. 😃😁😄🌞
Toodle pip.   ilona
Posted by Meanqueen at 11:36 No comments:

Email ThisBlogThis!Share to TwitterShare to FacebookShare to Pinterest
Labels: nature

I haven't been to London in quite a lot of years. If I was to go I would travel on the train. Although as an experienced driver, my reflexes are not as sharp as they used to be and I have turned into a steady plodder. I try to read the road signs, not wishing to make a mistake, although turning around in a car is a lot easier than backing an artic into a side road.

I read that they have extended the emissions zones in London, so there are a lot more areas where a driver has to pay to drive through. How that works I do not know. This system is alien to me, living up here in the sticks. It must be so confusing for those who have to drive through and around London. I suppose there are signs everywhere warning that you are entering an area that requires a payment to be made. I don't know if it's possible to do a 'u' turn if you hit one of these signs. I imagine a screech of brakes when suddenly faced with a 'pay as you go' road.

If you don't take note of these signs you could end up with a fistful of fines coming through the post, like this lady did.

There seems to be a plan to get cars off the road. Make it so unaffordable to run a car that we all give up. Fuel costs increasing, maintenance costs increasing, insurance increasing, and now they are bringing in a scrappage plan. It looks like it is all being pushed towards getting rid of diesel and petrol, and pushing forward onto electric cars. I think I will have stopped driving by then. You will see me bombing around on one of those electric buggy's. I believe you can get plastic covers for them, like a little tent on wheels.

Posted by Meanqueen at 09:21 No comments:

Email ThisBlogThis!Share to TwitterShare to FacebookShare to Pinterest
Labels: observations

A video I made the other day. It's been sitting in the drafts folder.
Another vid coming up as soon as I get it uploaded to yoootooob. Catch ya later. Toodle pip.   ilona
Posted by Meanqueen at 08:35 No comments: