My mini break at Grinton Lodge

Hi, there are quite a lot of photo's in this post, I took 65 and more than usual have turned out ok, I hope you like them. I left home at 9.40am on Wednesday and met my sister and her husband at Bedale, a few miles from the A1 in North Yorkshire. They are staying in their caravan near Stokesley on the edge of the North Yorkshire Moors, and came across to meet me. We found Panetti's, a cosy little Bistro where we had lunch, this is me, Bryn, and Anna Maria. 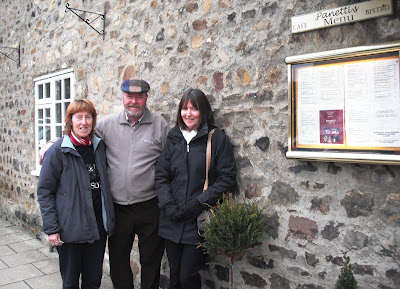 After a walk round we parted company, and I carried on a few miles further to Leyburn. I have wanted to visit this small town for years, ever since I delivered cement to a quarry there. It was just as I remembered it, a charming Dales town full of character. Then it was time to go to the hostel. The road is quite narrow and twisty and passes large areas of moorland which are out of bounds to everyone except the military who do a lot of their training there. Best not to wander into it in case you get shot at. It had started to snow and after a couple of miles it was getting quite heavy and settling on the road. I was down to a crawl in some places. I couldn't see the edges of the road. Thank goodness I came across the hostel before it got too dangerous, I was pleased to see the huge castle like building come into view, partially hidden in the trees.

I checked in and found I had the place to myself, just me and the warden. I had my own room with four beds to choose from, and numerous shower and toilet facilities. I had the kitchen to myself and after I cooked my own dinner I had control over the television remote all night long. A real fire in the grate and a can of cider, it was heaven.

This is Grinton Lodge, I took a photo of the poster on the wall. It was built at the centre of a large shooting estate in 1817, by James Fenton of Doncaster, a mansion with outhouses and stables set in gardens with wonderful views of the surrounding moorlands. It changed hands several times and had extensive alterations in 1880 for it's disabled owner to enable wheelchair access. The lodge was sold with 5 acres of land to the YHA for £5,500 in 1948. I wonder what it's worth now. 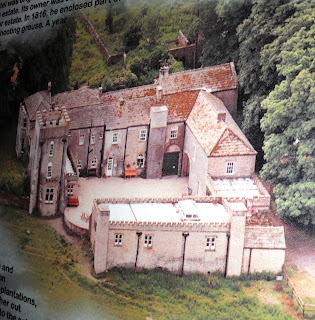 This is the sight that greeted me when I set off the next morning with my backpack and my map. This path is opposite the hostel, no footprints, just rabbit paw prints in the snow. 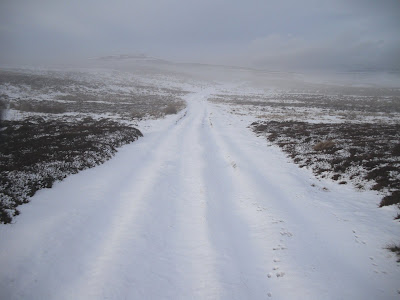 It wasn't long before I came to a deep and slippery slope down to a stream. 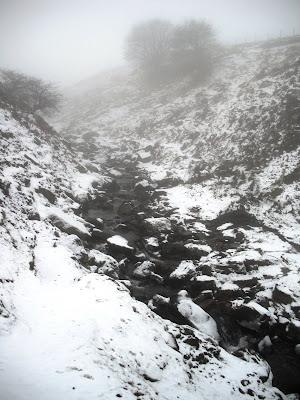 And a climb up the other side. You can see it is quite misty. 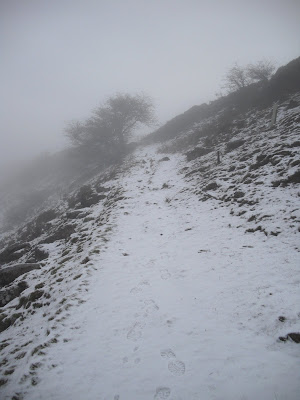 Into Grinton village, this is St Michaels Church. 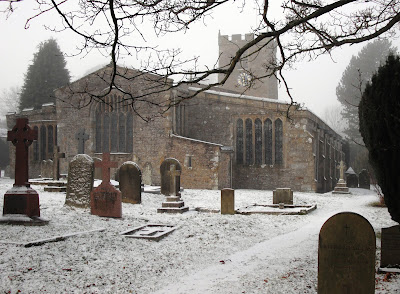 I took a footpath alongside the river, then veered off to the right through the fields heading towards Cuckoo Hill. If you look at the skyline in the next picture you can see the snow at the top of Fremington Edge, I am hoping to climb up there. 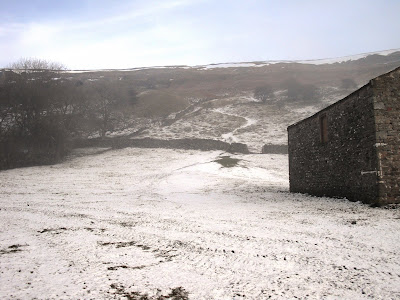 A breather half way up and a chance to look down and admire the view. There is a lot of mist hanging in the sky, and the sun is trying to come out. 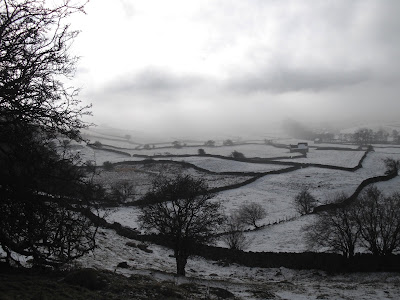 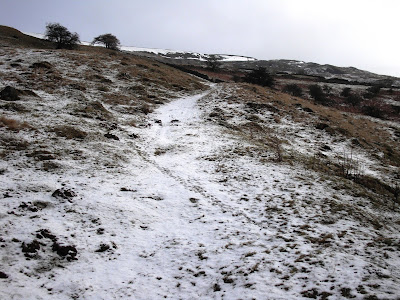 A bit further to go, stop for another breather. The weather is changing by the minute, the sun is trying to make a show on the left, the wind is swirling the mist, sometimes you can see for miles, then the view is hidden. 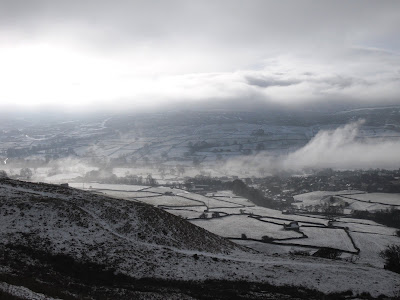 Another stop before the top, the view is so magnificent I sit on a rock and take a few minutes to take in the gloriousness of it. You can just see the barn on the left hand side of this picture that was in the shot at the start of the climb. This is better than flying. 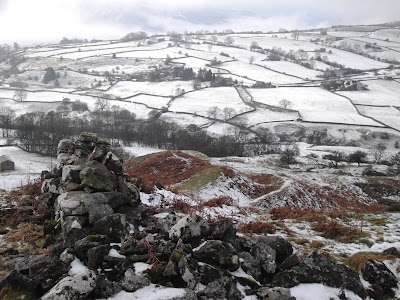 At last, the pile of stones indicates I have made it. That last few hundred yards was rather difficult, a vast shelf of frozen snow to cross with no obvious foot holes, I could have done with some crampons. But once you get so far there is no giving up and going back. I know to some experienced climbers that this would have been a mere stroll in the park, but to me it was a wonderful opportunity for a challenge. The sense of achievement I felt made me beam with pleasure, and the rewards are a stunning view. Well worth the effort. 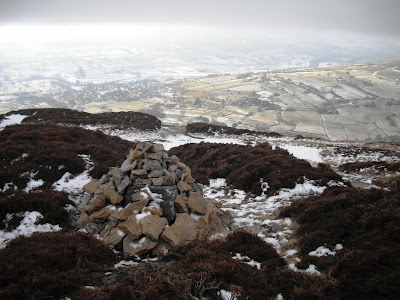 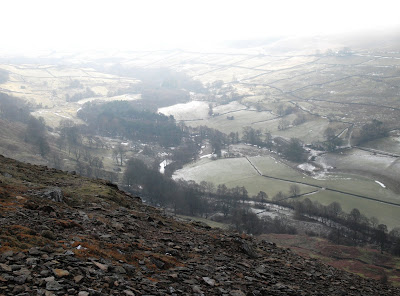 At the top I turned left and walked along the edge for about an hour, the mist was coming down very fast so my views were totally lost and I was walking on a ridge of snow alongside a wall with the moors on my right, and very little vision in any direction. Eventually I came to the point when I had to start my descent, the mist cleared a bit as I went down. It wasn't obvious where the footpath was, but thankfully the kind walkers before me had built little piles of stones to mark the way. I eventually got down to the bottom at Langthwaite, and turned left to follow the Arkle Beck back to the hostel. Time was getting on, and at one point I lost the footpath. It was becoming quite difficult along the waters edge, the erosion of the soil, due to possibly snow and rain, and walkers boots, had left all the tree roots exposed. I was literally stumbling about which was taking it's toll on my feet. I noticed a lot of branches that had fallen or been blown from the trees had been stripped of their bark, I thought that was strange. I also noticed that there were a lot of dead rabbits about, probably hundreds of them, also very strange. 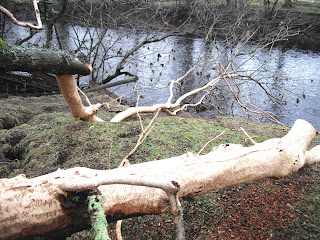 It was time I was getting off this rough ground and onto the road before it got dark, a race against the clock. Eventually I came to the road at High Fremington, and knew that I could easily get back to the hostel along the road from there.

Day three. A drizzly start to the day so waterproof gear needed. I headed towards Grinton on the road and came across a pleasant little footpath alongside a stream. 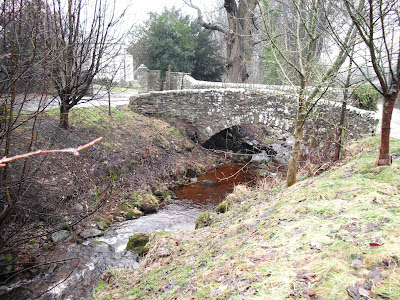 There was a poster in the hostel that said Market Day in Reeth on a Friday, so I went to explore. It's a gorgeous little village. This is the Babtist church. 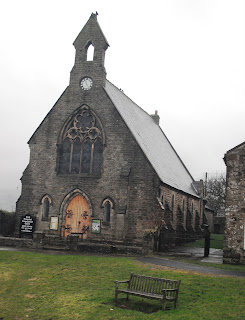 It was a very small market because it is early in the year. I had a chat to two of the stall holders who said how much they enjoyed coming and it definately was worth the effort to get up early and travel the long distances, because the same regular customers came every week. 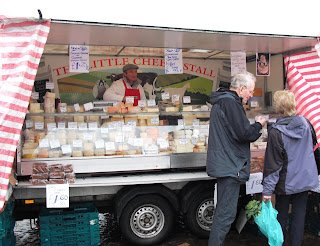 This tiny cobbled street with it's pretty cottages is typical of many Dales villages. 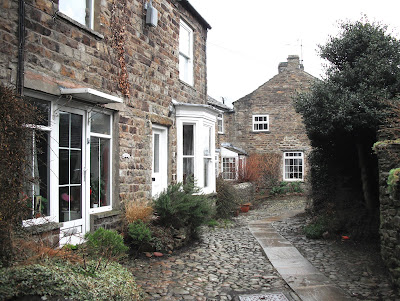 I had a look round the craft workshops and had a chat with a very friendly artist who makes animal sculptures. I asked him if he could shed any light on the dead rabbits. His explanation was that they have had three weeks of snow and the rabbits wont have been able to find any food so they have just died. He said that would also explain the trees without the bark as they would have been desperate to eat anything. Also the burrows would have been flooded. I felt very sad that all those bunnies have died, but I suppose that is the law of nature.
I thought I would have a spell of easy walking along the road to give my feet a rest. There was a lot of baa baa noises coming from the fields as I was passing, so I stopped to talk to the sheep. They seemed curious and all came strolling towards me bleating incessantly. It was so funny, I had to take a photo. 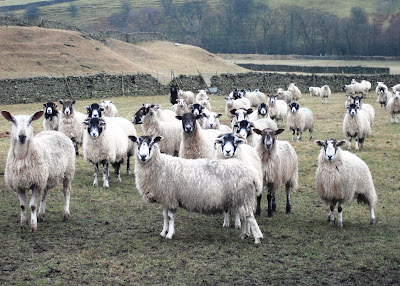 I was watching the time, this walk won't be as long as yesterdays because of the time I spent in Reeth, but I wanted to make the best of every minute and not get back too early, so I took a diversion up a steep track at Healaugh. My goodness it was very short and very steep, I had to peel off a couple of layers I was so hot. I passed by a lovely big house and had a chat to the two gentlemen in the garden, they pointed out the track back to the road past Thiernswood Hall, a big stately home.
Back on the road, I eventually I came to a junction and turned left over a bridge. 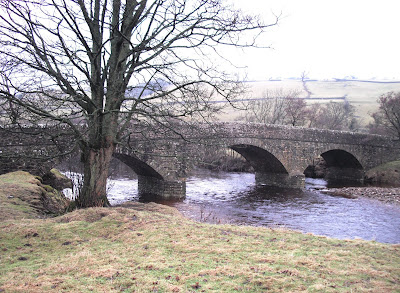 I turned left again and continued along a tarmac track. A short way along there I had the option of dropping down onto the edge of the river Swale, or keep on the track back to Grinton. I chose the river walk. 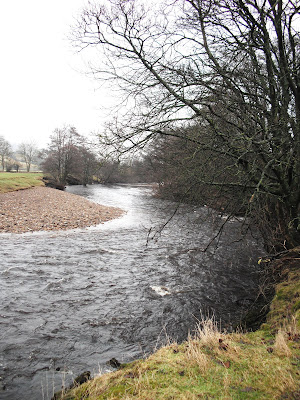 The river is quite fast flowing here. It looks as if the path might have been washed into the river at some time, because it has been repaired with large rocks. 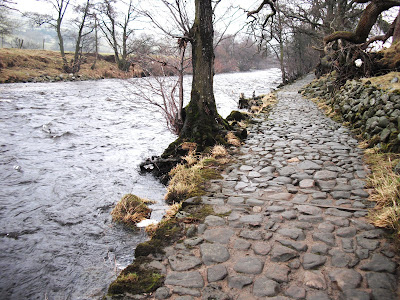 After a few bends the path leaves the river for a while, it eventually returns and you see this wooden footbridge. It looks quite spectacular from a distance but close up it looks like a miniature version of the Humber Bridge. It would look quite at home in a theme park. 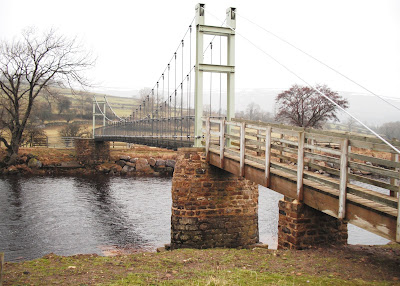 I walked back to the hostel over the fields rather than the road. Quite an impressive building don't you think. 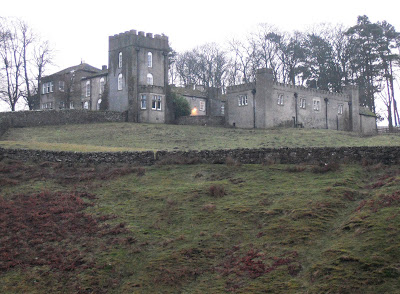 If you've got this far well done, thank you for reading, I hope you enjoyed it.
Posted by Meanqueen at 12:33