Another day in Oban

Hiya Peeps, reporting in from a blustery Oban. I've had a fab day, been exploring along the coast in a northerly direction, thank you to my friend Irene for lending me the maps, I didn't have to buy any. A little bimble around Oban first. The Distillery is in Stafford Street, established in 1794, a fine old building, but at £7 for the tour, you've guessed, I didn't bother. 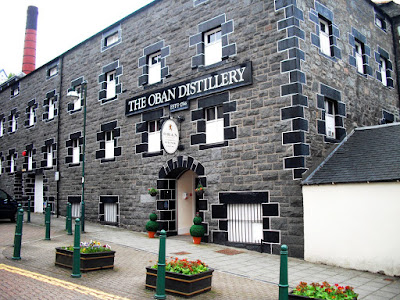 Not far from the Ferry Terminal is this shop, I had to look twice at this sign, ha ha. 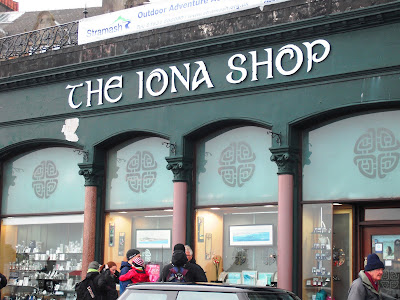 Corran Esplanade is the home of the Museum. Yes, I went in, it is free. I like this board showing all the different vessels that sail around the islands. 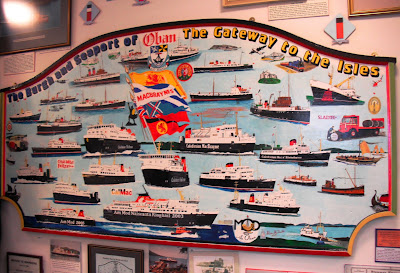 This is the entrance. 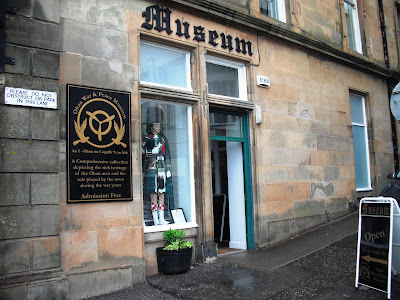 Now this looks like my kind of shop, yummy chocolate. A glance at the menu outside, hot chocolate, £2.80. You've guessed, no thanks. 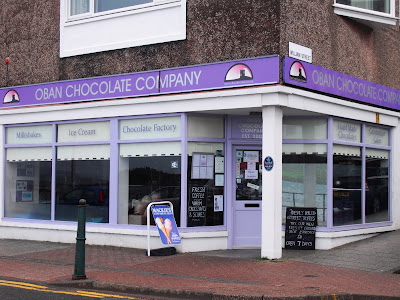 I set off up the Esplanade and came across the Scottish Youth Hostel which is closed for refurbishment. I would have stayed here if it had been open, it's right opposite the sea. Never mind, maybe next time. 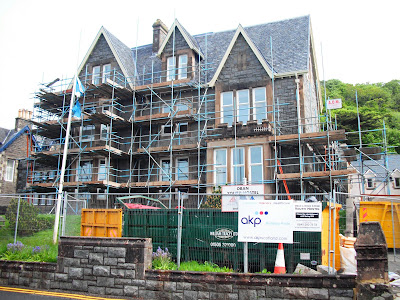 Oh look what's coming back into the harbour, my boat. Passing the lighthouse on the tip of Kerrera. 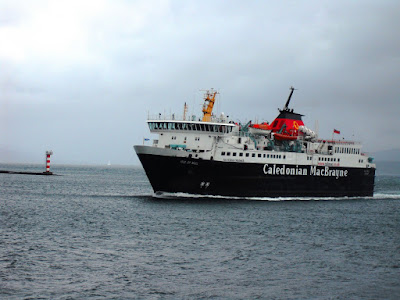 Up on the hillside is Dunollie Castle, so I climbed up to see it. This is the view looking back along the road I have just come down. 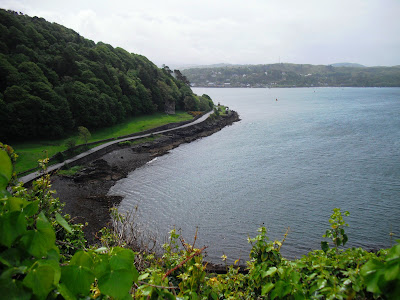 And there is the lighthouse again. 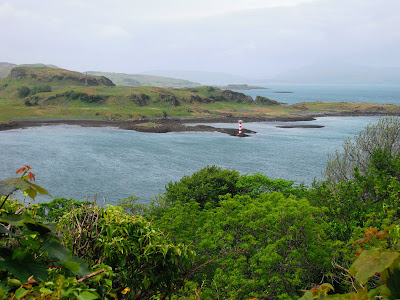 Here is the castle, there isn't much left of it. 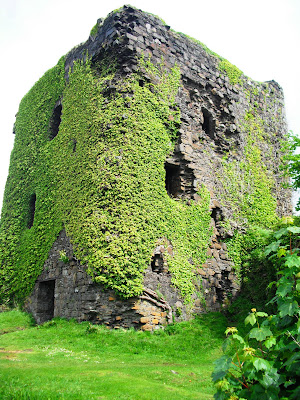 This is Maiden Island. 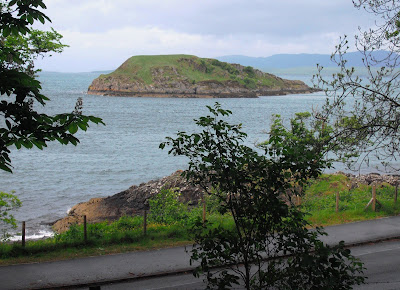 I am still following the road along here, and arrived at Ganavan Bay. It has a lovely sandy beach, and a big car park. I was disappointed to see a lot of new build houses and flats, I think they spoil the look of the place. The fronts look like something out of a Holywood film set, all the lawns trimmed to perfection. I half expected the Steptford Wives to pop out of the front doors. 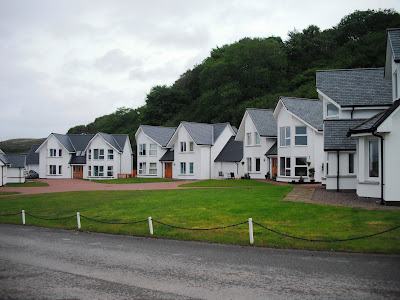 Of course you have to walk on the beach, don't you, and take a picture of the seaweed. 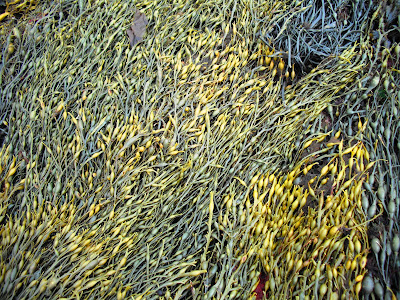 This is the point where another walk starts in the library book, so I am going to attempt to follow it. Just before me, a group of school children set off with their teachers, all clad in their safety gear. I caught them up as they were clambering over the rocks to study the shore line. 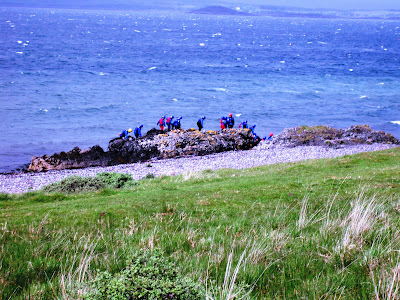 The book said straight ahead keeping the sea close on the left hand side. It was quite windy and boggy underfoot in places, but quite exhilerating. 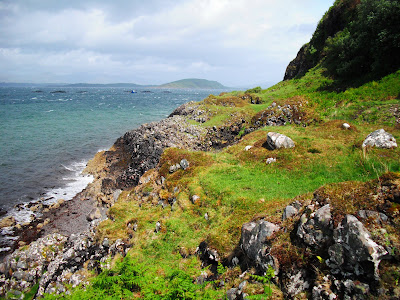 The further I went the higher the path went, and the more blustery it got. I reached a part where the path became very narrow, see photo below, it went round the side of a huge rock, and I had trouble staying on my feet. It was quite a steep drop down, so I made the decision to turn round and go back, it was too dangerous. I could see my eight stone being blown over the edge, best to abandon that idea. 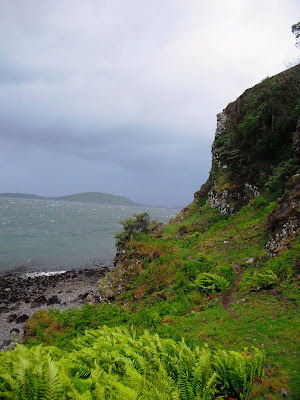 I got back to the car park and watched the firemen and woman practising with their hose pipes. 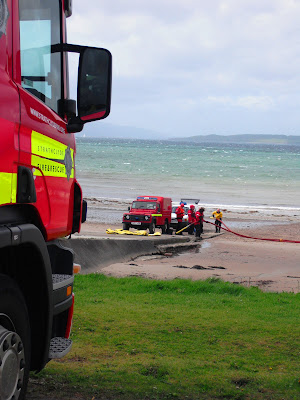 Plan B was to take the Sustrans cycle route to Dunbeg, a nice tarmac path to walk along. It was very steep in places. I don't think anyone could have pedalled up a hill that steep, it was as steep as a roller coaster ride. 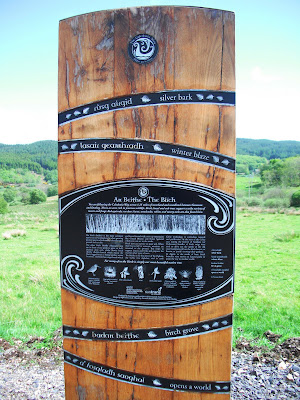 When I got to the end, I turned round and came back. The weather up to then had been fine, very blustery but dry, even sunny in places. Then the rain came, so I set off back to Oban.
As I came back along the Esplanade it was blowing a gale, and freezing cold. I couldn't believe what this man was doing in the sea. He was hanging on to a kite' and skimming along the water at a terrific rate of knots on a single ski. All of a sudden the wind would lift him high out of the water and he would drop back down and carry on. He must have had amazing strength in his shoulders and arms. I thought he must be a bit bonkers, I was frozen and fully dressed so what was he like in his ski gear with bare feet and no gloves. Probably running on adrenalin. 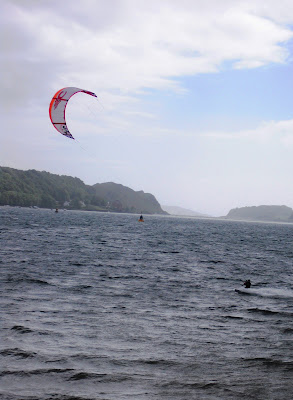 Someone commented that I must have been to Tesco here, well yes I have. I fancied a drink of wine with my dinner tonight, so I have treated myself. My dinner was cheap though, reduced price mushrooms cooked in sesame seed oil with broccoli and onion, and a spud in the microwave.

I saw me on the box tonight, twice this week. I think if the series was to go on longer it would get better. They did start to steer away from the old fashioned money saving, and modernise it a bit.

Off to Mull tomorrow, hope I don't throw up on the boat, how embarrassing, ha ha.
Posted by Meanqueen at 21:35