No one was in a hurry to go out this morning, I stayed in bed a bit longer when I saw the rain outside. Eventually I ventured out clad in waterproofs, I can do it I thought. Not going to let a drop of the wet stuff spoil my holiday.

I walked up to the car park, and according to the book there is a steep path in the corner which goes to Aros Park. This walk is only 4.5 miles long but it might be enough if it doesn't stop raining. The little brolly which my friend gave me is certainly coming in usefeull.

The path follows the coast line as it climbs up from Tobermory Bay. I can see Calve Island. 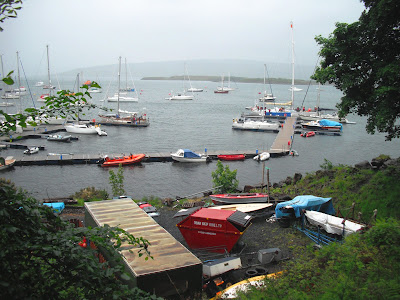 Visibility is not so good, it is very drizzly. 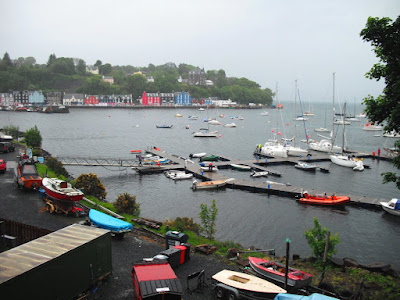 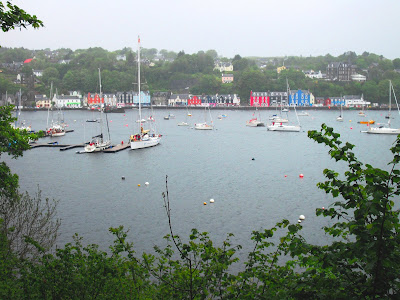 Halfway through the wood I came across a waterfall, the water was coming down from the right and tumbling over the rocks into the sea on my left. I stood on a little wooden bridge which goes over the top of it. 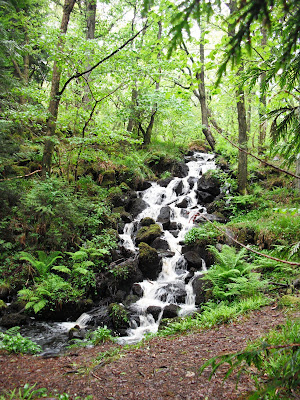 It looked pretty spectacular, even better than the other waterfall I mentioned. 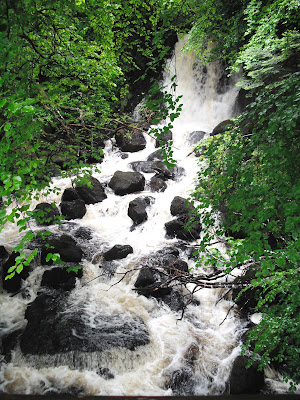 The path split just there, with a sign saying 'Upper Falls', to the right. I was already impressed with the size of it so I decided to explore more and climb the path to the upper section.
I'm glad I did. When I reached the top the camera came out yet again. Huge waves came crashing down on to the black boulders below. It was well worth the climb up in the pouring rain. 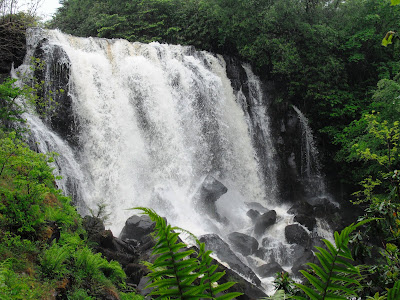 After lingering for a few minutes to take in the beauty of this masterpiece which nature has provided, I returned down to the path below and continued to follow the path in the book. 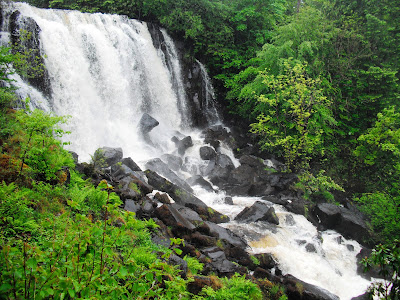 I came to a little stone pier with a couple of derelict buildings close by, which was deserted. There was a concrete ramp to launch boats from and the sign says this is a working pier.
I continued to follow the signs for Aros Park and came to a big fishing pond. The book says do a circuit, so I did. Just by chance I came into a car park and picnic area. I had been looking for somewhere dry to to park my bum while I had a bite to eat, and found a stone wall with a wooden canopy over it. Not ideal but it kept the rain off my sandwich.
By this time my enthusiasm was beginning to dampen, ha ha. There's only so much drenching a person can stand before it becomes really annoying. I'd had enough so I set off back to the refuge of the hostel. Just follow the signs. 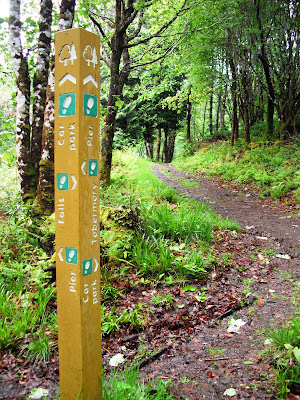 It continued to rain for the rest of the day. There was a friendly atmosphere at the hostel, some lovely French people to chat to, and families arriving with small children. I took over the TV zapper in the longe, and zapped to my hearts content. A toy for me to play with as I don't have a TV at home.

This is the last of the holiday pics, I hope you have enjoyed them. I have Henry choc lab arriving in about half an hour, then it will be lots of doggie walks. I hope you have a great weekend.
Posted by Meanqueen at 16:15