Hands up how many people can remember what they were doing on this day in 1965, it was a Thursday. Those under 47 don't need to answer ;O) I've just been flicking through my diary for that year, and you will be pleased to know I had quite a good day at work on the 21st of January. I was 15 and a Woolies shop girl. 'I have at last got a move onto the jewellery counter. Val will stay with me for a week then she will go onto make up. There is a new girl coming and I will move on Monday.' Then I wrote, 'I posted my letter to Jack at last, and took some shoes to the menders.' Who was Jack? There is a reference to him in the entry for January 1st. 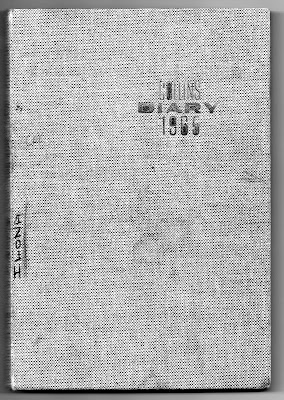 Jan 1st 1965. 'Mum told me that we will save to go to Australia and live on Jacks farm. I will love to go because I want to get away from Stretton and to be with Jack will be lovely. I told Lyn (friend) and she will be sad to see me go. Anyway, it's a long time away and we might not go till a few years time.' This is the day dream of a very naive fifteen year old, we didn't go to Australia. Jack was the nephew of Bob who lived next door, friends of mum and dad. Jack came to visit and I immediately had a crush on him.

Want to know some more?
Jan 2nd. 'I didn't go to work today because I have a cold, I just sat around coughing. I bought a film for my camera to take some photo's of Jack. On the tele I saw Juke Box Jury, Dr Who, and Voyage to the Bottom of the Sea. I bought a box of chocolates and ate them all.'

I bet you can't wait for the next entry now, ha ha.
Jan 3rd. I didn't do much today. I saw a fabulous film about warships. I took a photo of Bob hanging his washing out. Mum is poorly. I washed my hair and coloured it Golden Chestnut. I put it in rollers but took them out before I went to bed because I can't sleep in them.' Ha ha, gets better doesn't it.

Jan 4th. 'I went to work as usual but I've still got a cough. Lyn told me she's got lodgings with an old lady of 50.' It makes me smile when I read that now. Good grief, I am 62 and don't consider myself old at all!

Jan 8th. Usual day at work, (on sweety counter). Saw John today and he tells me he's got a job and will be earning £8 a week and he says he will be able to take me out.' John was Lyn's friend and I fancied him like mad. He had long hair and a motorbike. I was dreaming that he might like me better than her.

Ha ha, this is funny, just as I wrote it.
Jan 10th (Sunday) 'I stayed in bed till 10.30. I didn't do much. I washed my hair with bubble bath and it turned out lovely. Later I had a fabulous bubble bath. I love having a bubble bath because you can relax in it and the bubbles cover you. I saw a film later (on the tele), and I sat by Jack. He is so big and fabulous.' What a silly girl I was.

Jan 14th. 'We were ever so busy at work and I was left on my own for most of the time. John said he would take me out this weekend but I don't suppose he will as he has said it twice before, and he hasn't.' I wasn't very lucky with boys at that time, I was forever being stood up. Waiting on a street corner, and an hour later still there and no sign.

I didn't like it on the jewellery counter so asked to go back on sweets.
March 12th. 'I am made charge girl on sweets (that's one step below supervisor). I started by cleaning the sweet bins out (under the counter). I am glad I am back on sweets.'

Woolies used to be a very busy shop in the sixties. I can remember customers waiting to come in at 9am, it was packed out all day. We used to serve them from behind the counter, weighing up loose sweets, then weighing the pick n mix after they had filled their paper bags. Customers were waiting three deep to get served. There was boxed chocolates, the seasonal goods, Easter eggs and selection boxes. I used to do all the counting in the stockroom. We called it 'doing the binders', big books where we entered all the stock we had, then the head of department did the ordering. I could hide away there for a couple of days out of sight, and dip into the sweeties without anyone seeing me :o)) Oh happy days. The Woolies which went bust not so long ago was nothing like the shop I used to work in.

I left there on Friday the 29th of October, and got my holiday pay in the last wage packet, a grand total of £8 2s 1d. I started work at Melias, a chain of small grocery shops, on the following Monday. I never did get to go out with John, or anybody else. In fact I didn't have my first date till I was almost 18, and then I didn't like it very much, ha ha. But that's another story. Toodle pip. `