I had every intention of concocting some delicious gastronomical delight for dinner tonight, but half way through the preparation I did an about turn and thought stuff it, I can't be bothered. This was supposed to be fishcakes. I steamed some potatoes, well one potato actually it was massive. Then I fried two chopped onions in a pan with a splash of oil, adding some sweetcorn, spices, and lemon juice. Transfer potatoes to a dish and mash. Then add the onions and sweetcorm, and a tin of tuna fish and mix it all together. When it came to sticking my hands in and rolling the mixture into balls to put under the grill, I thought blow that for a game of soldiers, I don't want to get my hands all sticky. So I just dolloped it on a plate and added a tin of mushy peas. It's all the same after it's gone down the hatch, why waste gas on grilling the balls. There's plenty left to warm up for lunch tomorrow, so double explosion, ha ha. 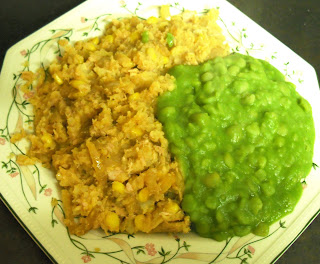 I was going to go to Hull this morning on the bus, but it was raining so I didn't fancy that. Instead I pottered around the house. I thought about making a bag, I have plenty of fabric, but couldn't decide what to make the shoulder strap out of, so I gave up. Never mind I will go on the machine instead, while I listen to Burnsy on Radio Humberside. He was having a discussion about M & S who have applied to build a big superstore on the edge of town close to Tesco and B & Q. It went before the planning committe this afternoon. There has been a lot of opposition, people say it will kill the town centre. Anyway, the plans have been passed so it looks like it might go ahead, not that it will affect me, I can't afford to shop there.

My friend Julie called round with Jessie blind dog, we had a natter. She has to go to a funeral tomorrow so I will look after Jessie for her. When she had gone I went for Rocky, he only lives up the road. We had a nice long walk. Thank you all for your imput on the post yesterday, it made me feel a bit better. I will carry on taking him out, just to see his cute little face and his waggy tail is enough reward.

The pile of rubbish I collected is still there. I had an email from the clerk to the Parish Council, apparently I have put it in the wrong place. The land does not belong to the council, it is privately owned, and not their job to collect it. This time though they will collect it, but if I have any more I have to carry it down to the other end of the footpath to the picnic area, which is council owned. Trouble is the bags get quite heavy when they are full of glass bottles. Think I'll stick to doing the centre of the village in future, then I am not too far from a litter bin to empty my bags into.

I've just remembered, I've got a few snaps of the day out I had with family on Sunday, I'll get them posted tomorrow. Toodle pip.
Posted by Meanqueen at 20:20