What a colourful breakfast I had this morning. Porridge with sultanas, and a splash of home made blackberry juice. Simply divine. In fact, looking at that I am prompted to go and get myself a glass of juice to drink now. Won't be a tick. 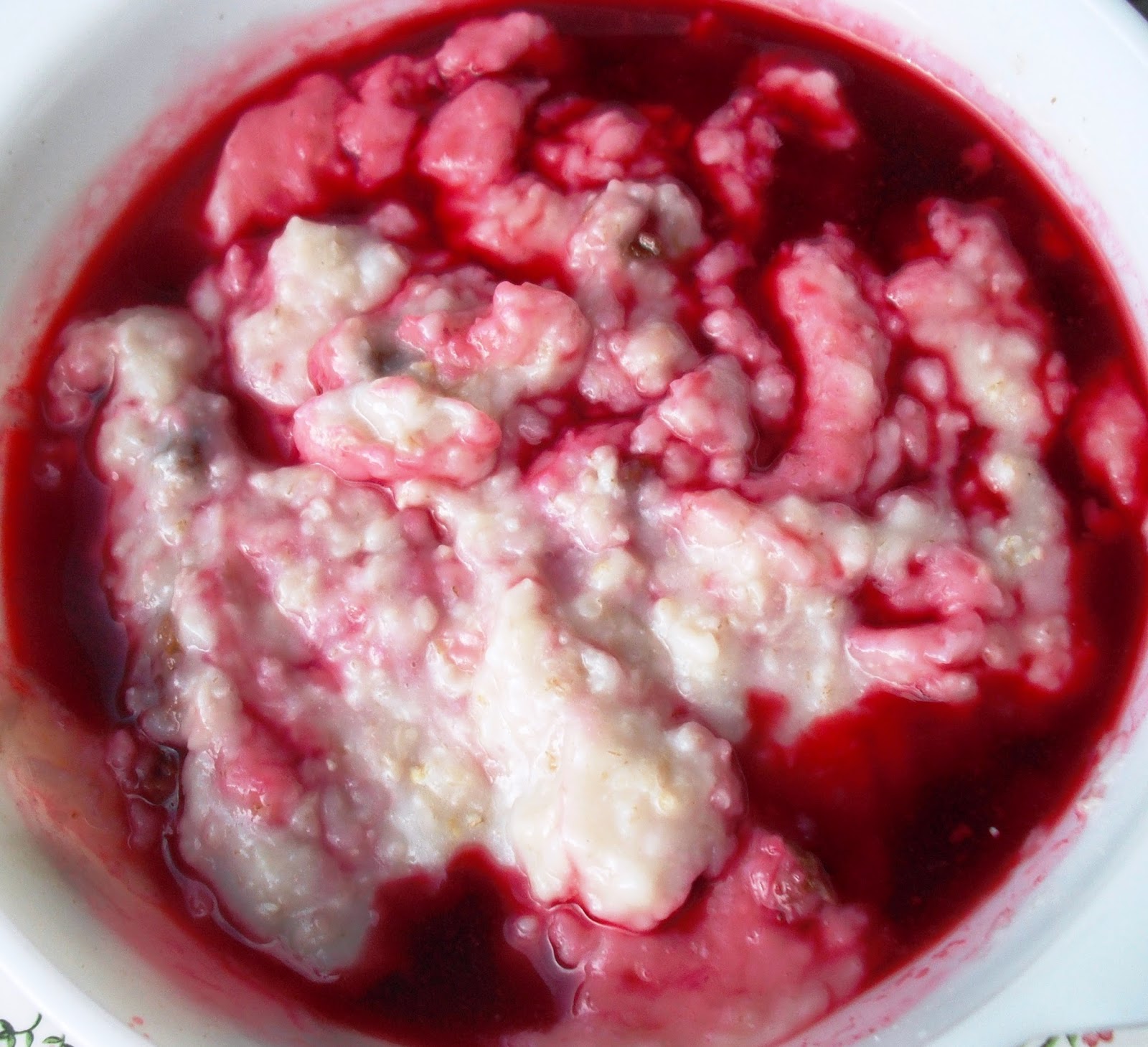 Bugsy seems to be living on my bedroom window sill at the moment. He has moved from the spare room, not sure why as the view is exactly the same. Those lorries are not normally there though, we never get lorries down our street, except when they get lost, it is a dead end street that goes nowhere. Signs appeared a couple of days ago saying they are going to re surface the road, and asks that no cars be parked today and tomorrow. Everyone complied with the request, lorries went up and down, they cleared the gutters and sealed up the drains, but the road has not been re surfaced. Maybe tomorrow then. Bugsy is looking forlornly at his empty bowl. 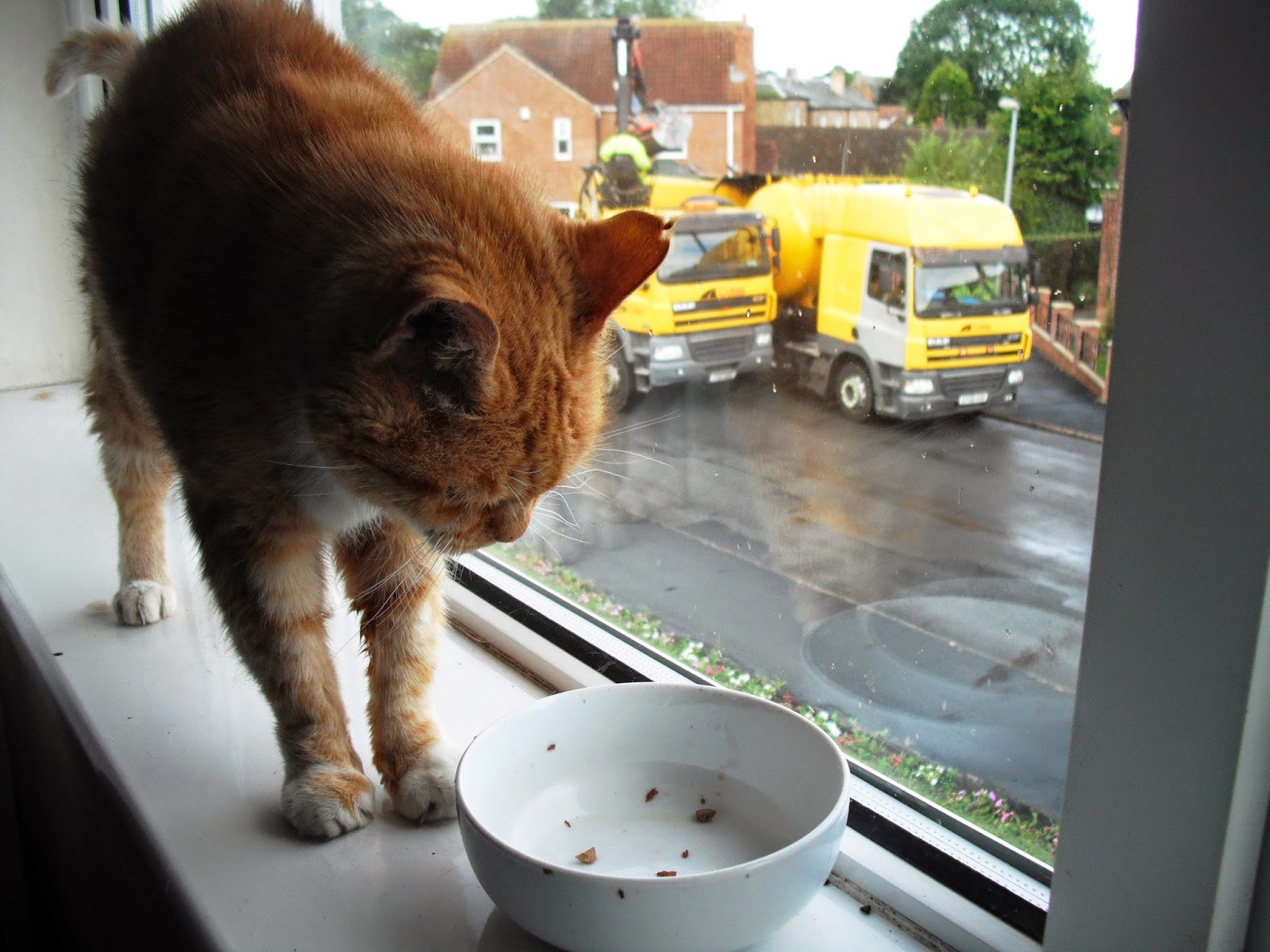 Mum, where's my food, go and get me some more. 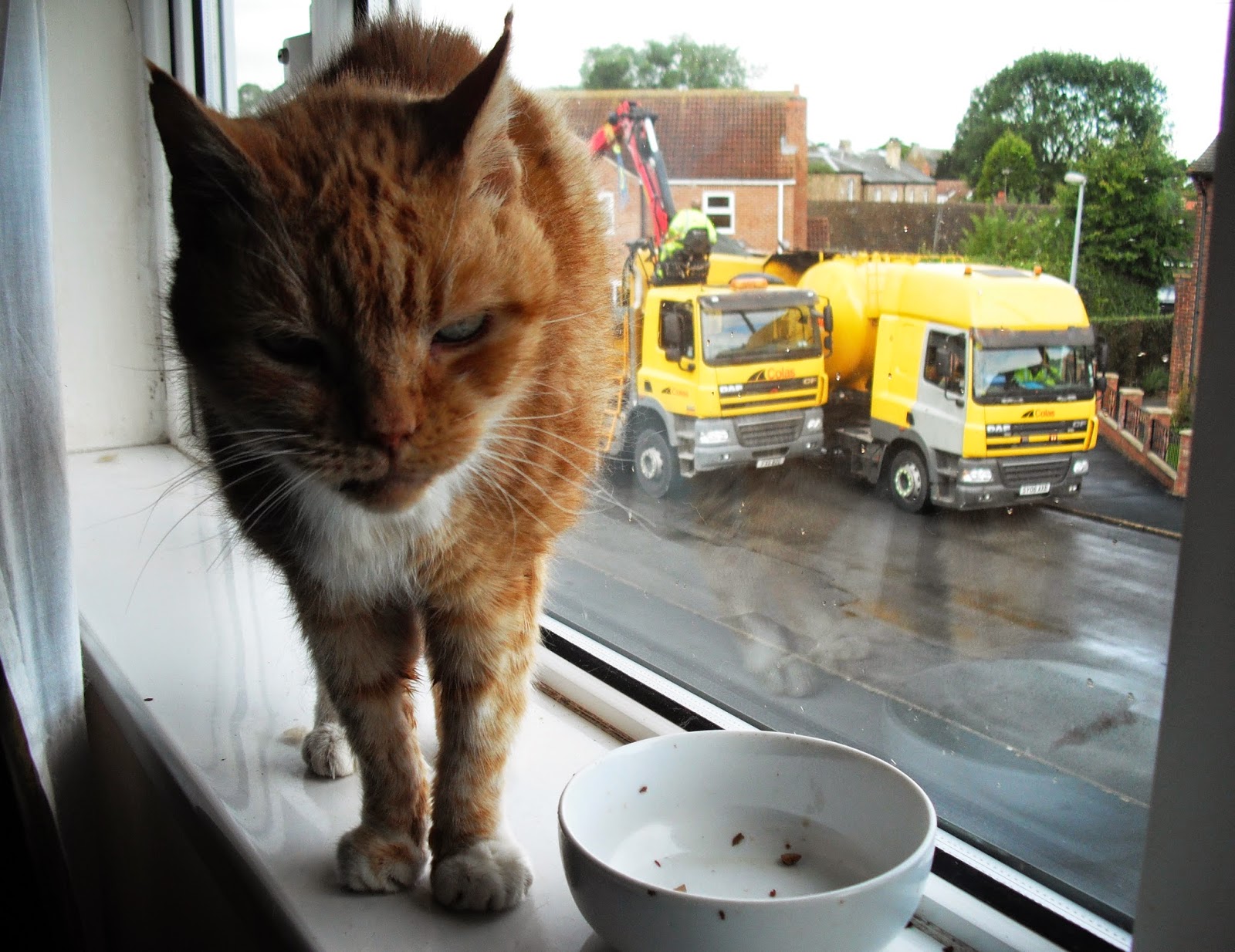 Yes, certainly Bugsy, here you are. Thanks Mum, mmmmm, my favourite. 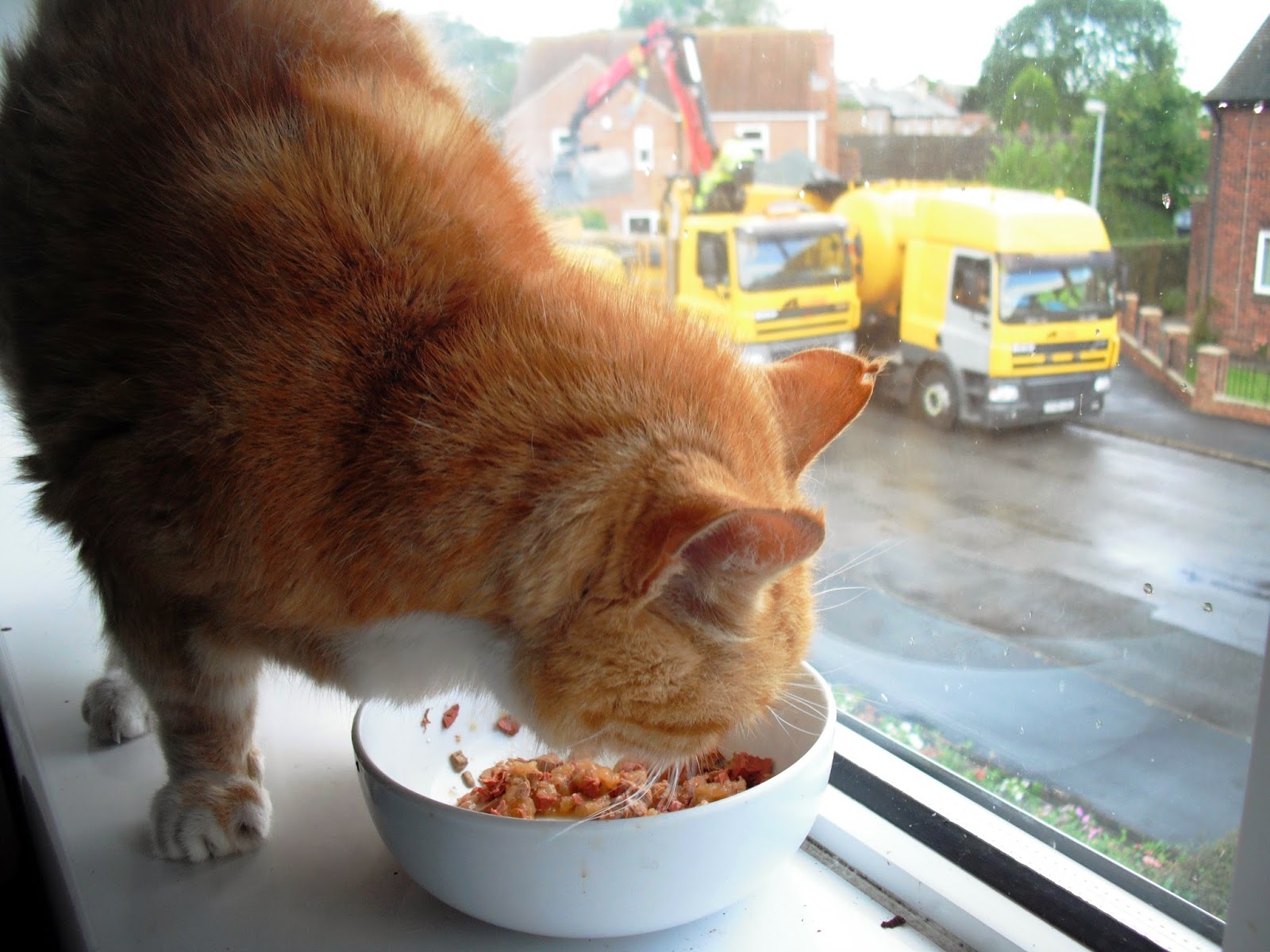 Cat rescue turned into hedgehog rescue this afternoon. I had a phone call from my friend, she had a young hedgehog on her front lawn and was worried that it might go onto the road. She said she rang me because she thought I would know someone who could help. Well I do know a lot of people in the village, ha ha. There is a lady who takes in hedgehogs but I couldn't find out who it is. The vet in the next village said they would take it in, check it, give it any treatment it needs and take it to a rescue centre. I tried it with a bit of cat food before I took it, but it didn't show much interest. 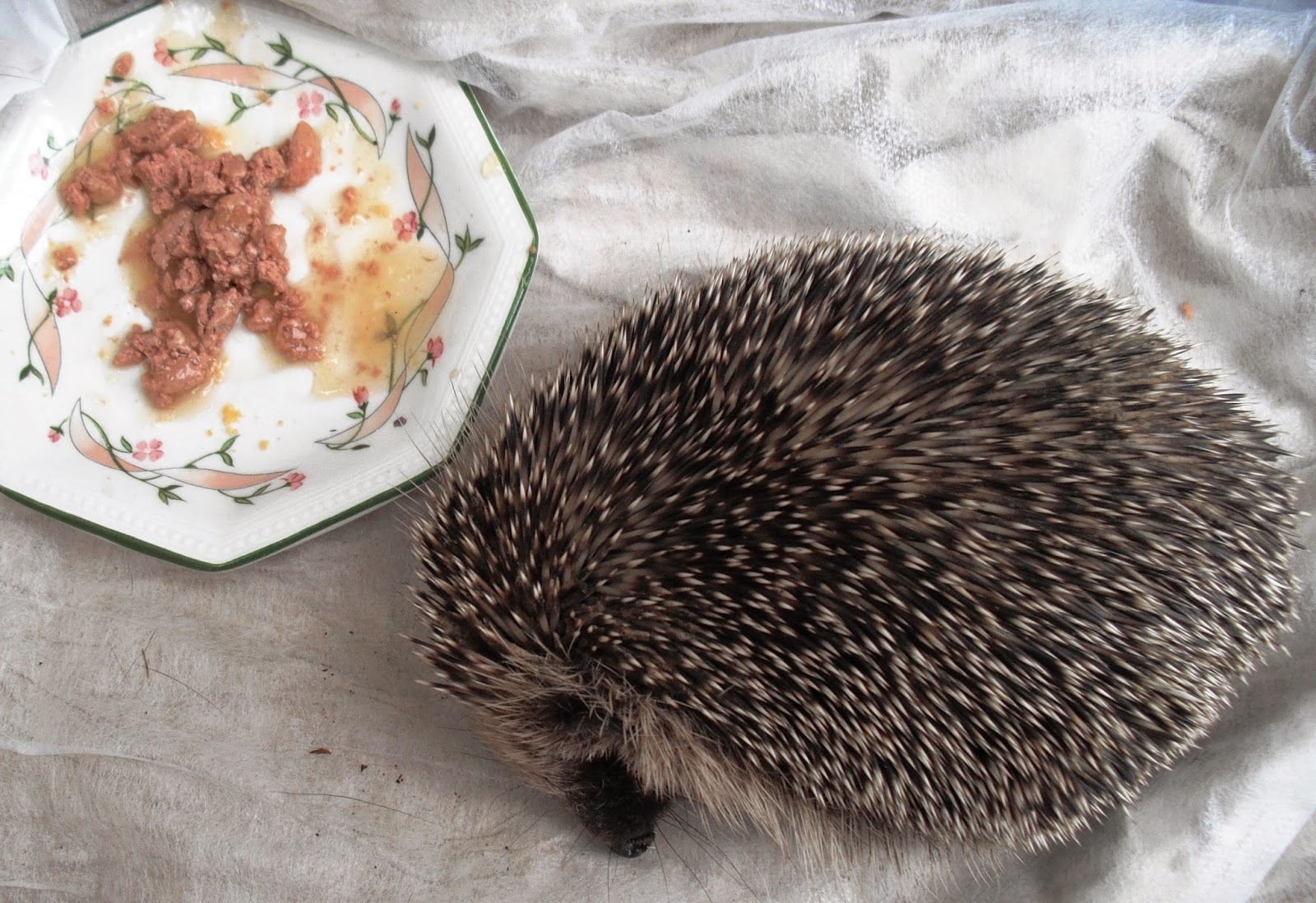 Poor little mite, so cute. I hope he survives and can be released back into the wild when he is big enough. 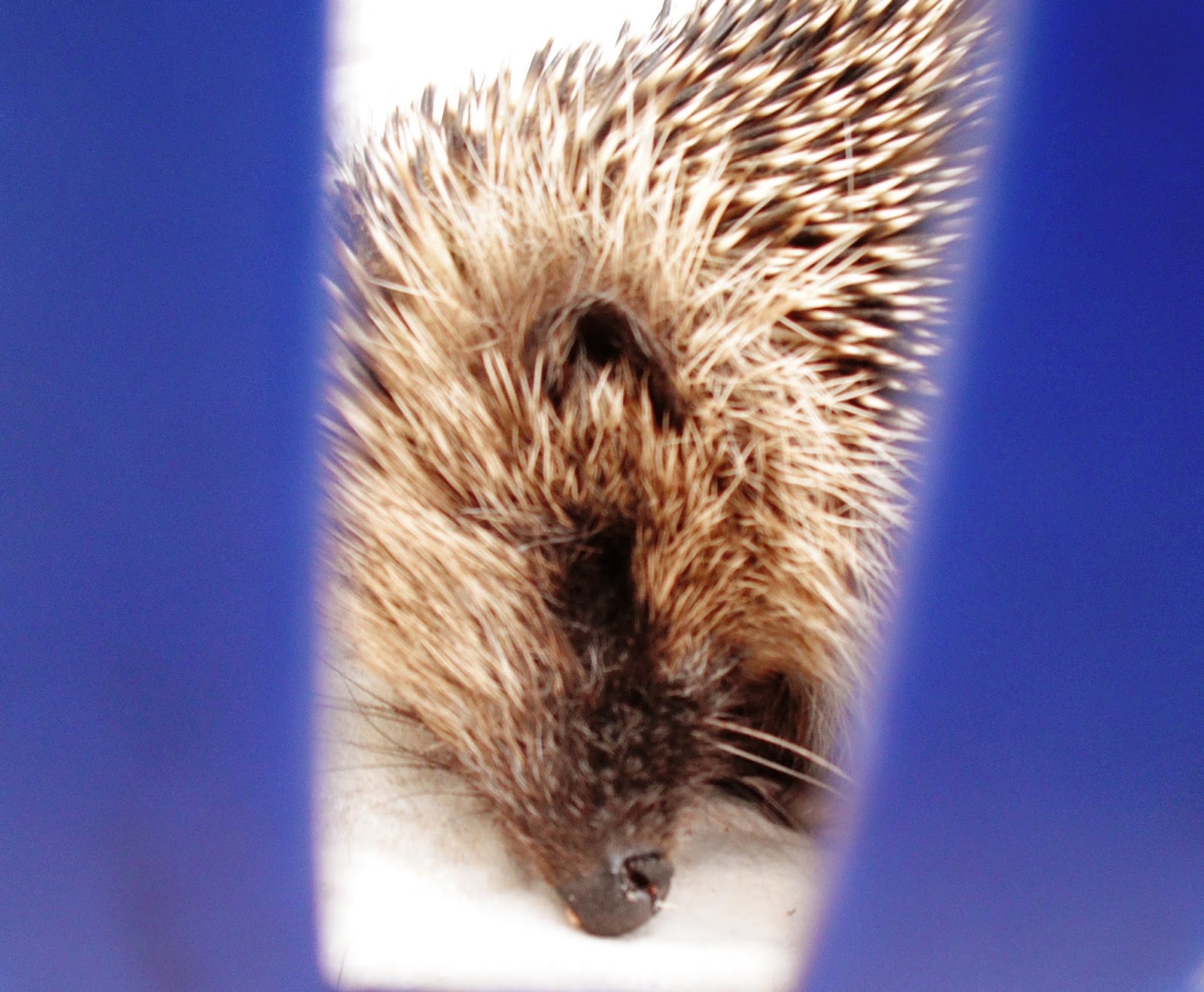 Hedgehogs are in decline at the moment. It's such a shame that so many of them get killed on the road. I have picked up four in the last few weeks. It really peeves me when one gets killed right outside someone's house, and no one comes out and picks it up. Why don't they? Why do they leave it there to get run over, again and again, with each passing car, so that it's innards are splattered all over the road. Why does everyone ignore the little body? It's bad enough that a poor animal has been killed, even worse that it has been left to get flattened. That's my gripe for today, please pick up any animal that gets killed in front of your house, don't leave it there. Say a little prayer, and say sorry.
Toodle pip.
Posted by Meanqueen at 21:10