Hello. This is a blast from the past, an oldie picture of me and my best friend Carol. Taken about 30 years ago, I think. Note the big hair, ha ha, we were always having perms. 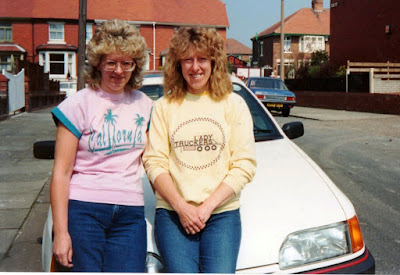 Well I think I can now say I'm officially retired. After only working half my hours in August it was time to hang up my boots. After working 51 years without a break, plus during this time the longest period out of work I had was one week. That's not bad for the amount of moves I had.I am now just waiting to exchange contracts on my sale, and purchase, and up north I will return after moving away 42 years ago.

Carol is two months older than me, we have remained friends almost all of our lives, living just down the road from each other when we were at junior and secondary school. We sat together on the school bus, hung out together, people thought we were sisters. Carol went to college when we left school at 15, and I got a job in Wooly's. Her family moved to Blackpool, and when I was 17 I went for a holiday, and moved there when I was 18. I stayed three and a half years, then moved on to Birmingham, then back home to Burton on Trent. Carol met someone and married, and moved around quite a bit after that. Carol didn't have any children and neither did I.

We always kept in touch, by phone, letter, and visiting each other. Now we phone, email, and text each other, with the occasional visit.

I am mighty proud of my best friend Carol, she is the sweetest nicest person you would ever wish to meet. She has been through a rough patch or two but has never shown any anger or hostility to anyone when in a difficult situation. Her family are absolutely thrilled that their sister, aunt, and great aunt is coming home.

It's funny that we are totally different when it comes to lifestyle choices, yet can still remain friends. Carol chose a well paying career and likes to spend her money on nice things. I did the opposite, had a career with reasonable pay, and don't place any importance on nice things. It must be down to our upbringing that we have both lived within our means. We are from working class families, and both learnt to make do and mend from our mothers.

I have been nagging Carol to retire ever since I finished work at 60. She has carried on another seven years because she enjoyed what she was doing, and got used to earning extra money to fund her chosen lifestyle. Now at last she is free from work, and is about to make the move from Hampshire back up north to where the rest of her family are. After working for 51 years, an amazing achievement, I think she has done her whack, and deserves to enjoy her retirement.

When she is settled in her new abode I can see a visit on the cards, I will be popping over to the west coast, and who knows, I may even take the train and walk back, ha ha.

Thanks for popping in. We'll catch up soon.
Toodle pip.