A walk from Flamborough Head back to Sewerby.

Hello. Here is part two of the first day's walking. After a quick toilet break at Flamborough Head, too cold to hang around, I set off along the coastal track towards North Landing. Here the sea birds are clinging onto the cliffs as the wind was howling around them, and the waves were lashing the rocks below. 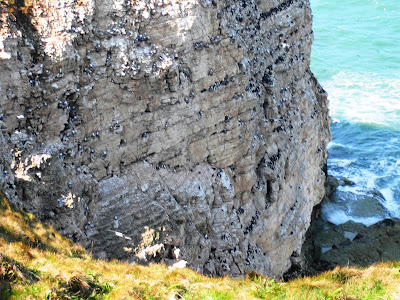 There are names for all the nooks and crannies around the coast, but I can't be bothered to remember them all. I just like to enjoy the change of scenery, the sounds and the smells of the sea air, and marvel at the wonders of nature. 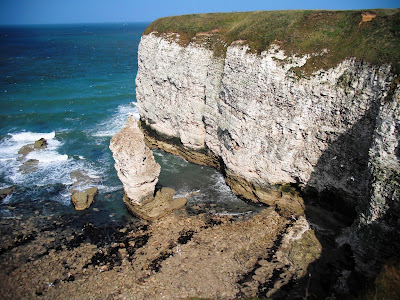 How wonderful to look down on the crashing waves, and further out into the wide sea beyond. We are just a mere dot on this amazing planet. 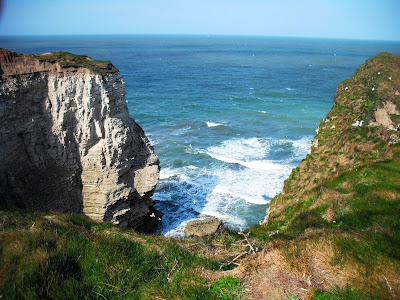 At the top of the steps approaching North Landing. A sheltered cove, ideal for mooching around the waters edge. 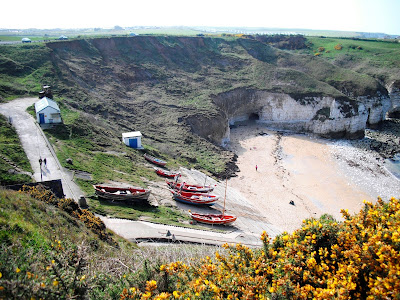 More sea views  and the path ahead. 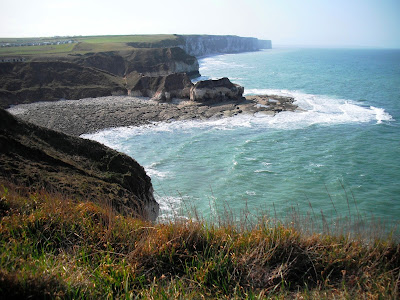 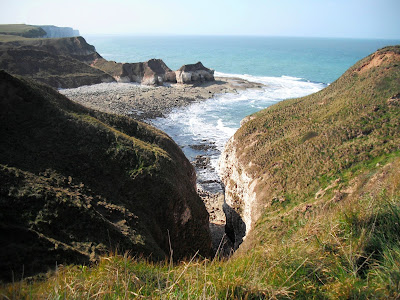 It was a long and hard straight trek to Thornwick Bay. Battling against the wind I decided it was time to head inland, I needed some respite, and some calm. There is a large mobile home holiday park here, with some of the caravans parked perilously close to the edge of the cliff. I noticed one jutting out with a 'For Sale' sign in the window. I wondered why anyone would want to buy that, being buffeted by the wind, and with only the vast ocean beyond with nothing happening. If there are no passing ships what is there to look at?

I walked through the caravans, and had to ask someone the way out, and eventually found the main entrance onto the road. At the end of the driveway are two yucky turquoise blue ponds with fountains spewing out what looked like some kind of obnoxious poison. That did not seem natural at all, in fact it reminded me a very heavily polluted sickly looking cesspit. 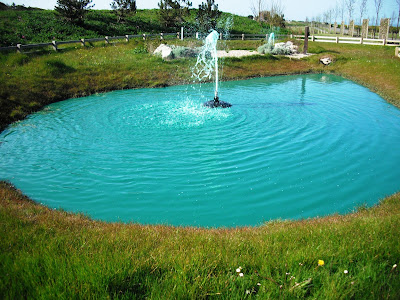 The lady I spoke to said it's a great place for families, plenty for kids to do. There is a camp site, but the place is so big you need a map to find your way around. 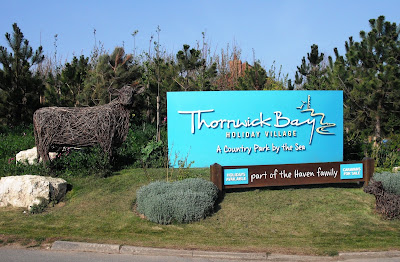 I'm on my way, heading towards Flamborough Village. 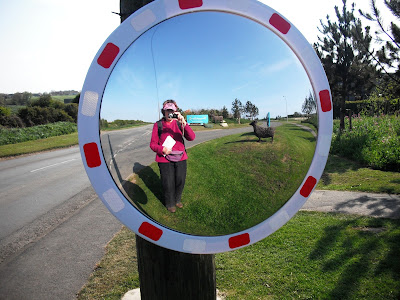 Once through Flamborough I found a path through some woods which took me back to Danes Dyke. These little signs are helpful. 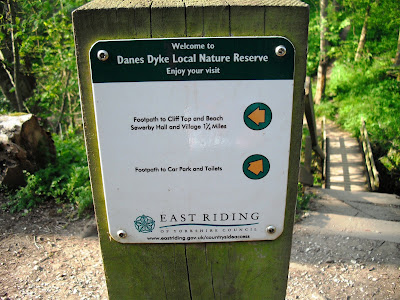 I was back on the coastal track. Follow the arrow to the left to Sewerby. When I got back to the car a large furniture removal lorry had parked two inches from my bumper. I joked with the driver and his mate, asking if my car was in their way. They were there for the night so when I moved they were able to get their lorry in a straight line against the kerb edge.

I fancied chips but sadly the chip shop in Sewerby was closed, so I had to drive a few minutes towards Bridlington where I found another one. Mushy peas and chips for dinner tonight. Then I went in search of a camp site, there was one marked on the map not too far away next to a railway line. I pulled in The Poplars, and pressed the buzzer at reception for service. I think the owners were a bit taken aback when I asked for a tent pitch but would be sleeping in my campercar. They couldn't decided what to charge me when I asked. We then had a smashing chat about money saving and simple living. They are keen frugalers so we spent twenty minutes swapping money saving stories. Eventually we haggled over the price, they did me a very good deal. I'm sorry to say that I forgot to ask their names and I can't find them on their web site. If you want to check it out it's here. They also do B & B at a very good price. It's a small camping and caravan site, good washing facilities, nice and quiet.

I did a bit of sewing after I ate my luke warm chips, but gave up when the light faded. Early to bed for me. Rosy cheeks from the wind. 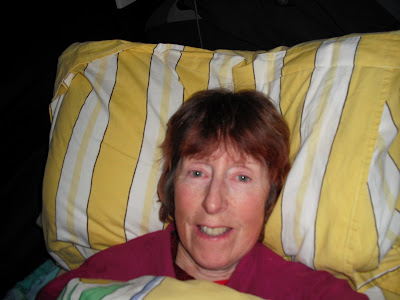 A few empty pitches, it's early in the season, best get booked if you want to come high season. The location is ideal for Bridlington and the east coast up to Scarborough. 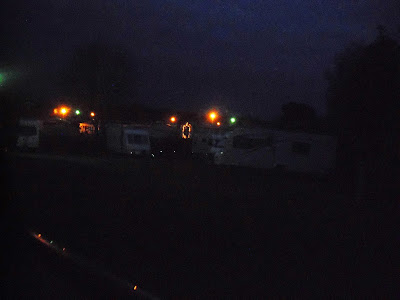 I'm staying in this afternoon, just found out that my favourite weather man Owain, has his first show on Radio York, started at 12 finishes at 3. I've already sent him a text and now I'm bopping away to his music.

I'll be back tomorrow with the next part of my two day walking break. Thanks for popping in, we'll catch up soon.
Toodle pip.
Posted by Meanqueen at 12:40