The first step on the ladder

I took this photo in Burton upon Trent, last week. Why would I want a photo of a small house with a big tree in the front garden? 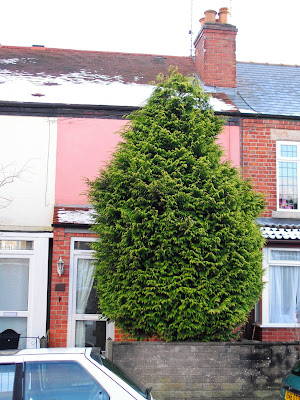 Because this is the first house I ever bought, this is where it all started. A little terraced house in a quiet cul de sac on the outskirts of Burton, near the hospital. This house got me on the property ladder in 1976. My first mortgage, and the cost of major renovations, kept me skint for many years. Every penny I had went into it, new concrete floors, wet rot, dry rot, woodworm, and rewiring, were all put right. Couldn't afford new windows or a kitchen so I had to make do with second hand stuff and decorate it myself.

Times were hard. I worked hard and didn't have the money to go out because it all went on the house. Twelve years later I sold this one and bought another house, a three bedroom semi, a step up the ladder. Once again I had no money. I had to borrow £3,000 to put new windows in and a new front door, the old ones were falling apart. I put all the money from the first house into this one, and once again I was skint. Luckily the £3,000 was loaned from a friend and I didn't have to pay any interest. I would never borrow money if I had to pay interest. I couldn't afford to have central heating put in so I managed.

Now I am on my third house. I put every penny from the sale of house number two, into this one. I stretched myself to the limit, paid as much as I could leaving me no spare cash. I had a partner at the time who was going to move in with me, he had plans for the house and would pay his share. He let me down, all his dreams were just that, dreams.

I know I haven't got a lot of possessions, but I have enough. I look around me and I am proud of myself, everything is mine because I have worked for 45 years, and paid for it. There is a little bit left to pay on the house, and I could easily pay it off if I step up the scrimping, but the small mortgage is easily manageable, and isn't it time I had a little enjoyment out of life?
Posted by Meanqueen at 19:35