Washing cans, I must be bonkers

You're gonna laugh at this. I've just been on about cooking a meal in a pan and eating it out of the pan to cut down on washing up, and lo and behold, one or two others have confessed they also follow this slobby method of eating. Well that has pleased me no end. 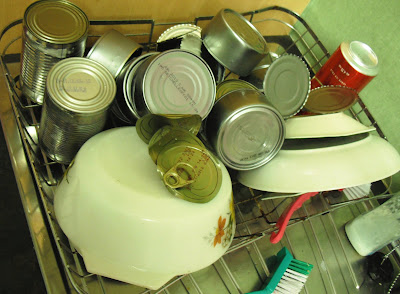 I've just done my washing up, the plates, mugs, saucepans and cutlery first, about four days worth, then a load of empty cans, mainly cat food cans I may add. OK, I did them in the same water at the end of the wash so it hasn't cost me any more in water or liquid, but it did take me an extra five minutes, removing the labels and scrubbing them out with a brush kept just for the job.

Why do I do it? Our cans and jars are collected every two weeks, we have a plasic box which we put out on the edge of the pavement at the front of the house. If the remnants of food are left in the cans they begin to stink and the box ends up becoming disgustingly filthy, and I don't want to have to wash this box. Not that anyone else does. I look at others in the street and if mine was like that I would be embarrassed.

I like my recycling box to look neat and tidy and clean, I put glass at one end and cans at the other. I think I must be a little bit doolally to go to all this trouble, they only get thrown into the lorry with all the rest.

If I stop doing it I would have to keep the box outside because it would smell, then it would get rained on, and eventually look shabby and start to fall apart. The council won't provide another free one, so if you damage the one you have, you have to pay for another. So I suppose in the long run, although it takes time to wash eveything I am saving money because my box lasts longer. Better carry on as I am then. Oh bugger, I was looking for an excuse to stop.
Posted by Meanqueen at 21:55

Email ThisBlogThis!Share to TwitterShare to FacebookShare to Pinterest
Labels: recycle