Learn something new every day.

I saw a man digging a hole in the middle of his front lawn today, and it made me think of this...

Me being nosey, I stopped to ask what he was doing. The hole was full of water and he was using a bucket to scoop it out. Perhaps he was making a pond, or maybe not if he was emptying it. He pulled an old tyre out, then a few bricks. Strange, why would somebody bury an old tyre in a front garden. He said it was where the builders got rid of rubbish when they had finished building the house.

His neighbour was also interested in this hole. There was piles of mud stacked up on his lawn making a right mess. The neighbour was emptying the buckets of water on the edge of the lawn. The man kneeling at the hole was up to his elbows in thick sludge, all brown and slimey, he must have had cold hands doing that. A small spade lay besides him and he picked it up and had another stab at the sodden earth at the bottom of the hole. Our village is built on clay so it was hard going for him.

The neighbour went to the downpipe at the corner of the house, from which a section had been cut away and disconnected where it went into the ground. He had a poke around with a yellow rod, lo and behold, the rod came out into the hole. Eureka! The pipework was unblocked. I was intrigued that the rain water from the roof drained into this hole in the middle of the front lawn. I asked why it didn't go into the main drains to the house.

Aha, the house has a soakaway, I was told, so that's it. I'd heard about these things but didn't know how they worked. You learn something new every day. The water that leaves a property either all goes down the main drain into the sewers, or the rain water goes off in a different direction and eventualy into the ground. The soakaway at this particular house wasn't working properly because there wasn't enough of the correct drainage materials in the hole. The water couldn't soak through the clay. Now the man has to dig deeper, and then refill with different grades of aggregate so that the water can run through it and  and soak downwards past the clay, rather than getting stuck, backing up and flooding the front garden. Fascinating stuff. 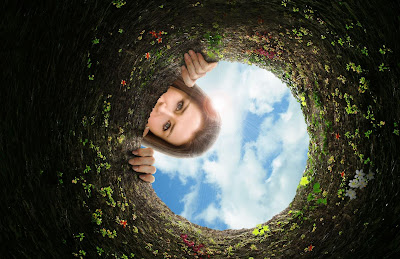 When I got home I did some research, because I know that if you have a soakaway you can get a reduction on your water bill. There is lots of information out there if you googlie 'soakaway'. I wondered if I had one. Alas, I don't think I do, although I'm not altogether certain. I have to go out tomorrow and look for a small manhole cover, lift it up. Then get up on the roof and pour some coloured water down the down pipe and see if it comes out in the hole. I think I need some assistance to do this as I don't have a ladder long enough. I could cut a hole in the downpipe a bit lower down where I could reach it. I might do that. Or I might ask my neighbours to see if any of them know about soakaways, and if we have one or not. Yes, that would be easier. Toodle pip.
Posted by Meanqueen at 17:59