Standing on the corner

It's not every day I get to hang out on a street corner with three blokes, but this morning I did just that. Me and Rocky were bimbling around the village when we came across this motley crew. They had very expensive looking cameras with massive lenses pointing into the sky, and they were standing around waiting. I don't know why they didn't bring some fold up chairs with them. I had to ask what they were looking for. Yes, I know they were bird spotting, see quick off the mark aren't I, ha ha.
Well the story is they have come from Grimsby, they were here yesterday, and have come back today hoping for more sightings. Twitchers take their hobby very seriously apparently, they will happily travel from one side of the country to the other, just because they have heard there might be a glimpse of a rare bird in the area. They are hoping to get some good pictures of Waxwings.
While I was standing with them, being nosey as usual, they pointed out a small flock flying overhead. There they are. Ah yes, I couldn't get a photo with my little compact, they swooped off quite quickly. They told me that Waxwings come here to over winter from Scandinavia, they come for the berries. Well that's something new I have learnt today. Fascinating stuff. 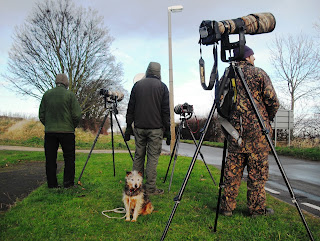 Look at the size of the lenses. 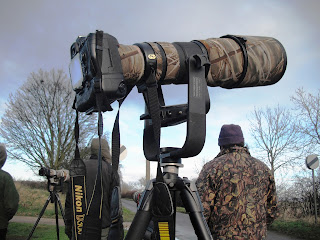 Absolutely huge. I asked how much they cost to buy, and was staggered when they said £3,000 for the camera and £5,000 for the lens. Flipping heck, then they have to buy the tripod because it is so heavy. 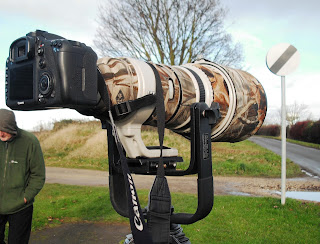 These chaps stand around all day bird spotting, they must be very dedicated. After 20 minutes I was stamping my feet to try and keep warm, time to move on. Here is a picture of a Waxwing. 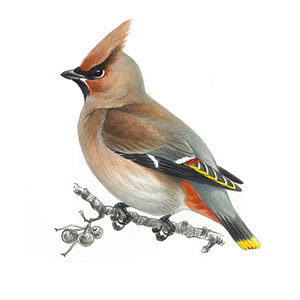 Isn't it pretty. And here is a short vid of one feeding on berries.


Here is a bit of info from the RSPB web site.
Waxwings (Bombycillidae)

The waxwing is a plump bird, which is slightly smaller than a starling. It has a prominent crest. It is reddish-brown with a black throat, a small black mask round its eye, yellow and white in the wings and a yellow-tipped tail. It does not breed in the UK, but is a winter visitor, in some years in larger numbers, called irruptions, when the population on its breeding grounds gets too big for the food available.

Where to see them
The first British arrivals each winter are usually seen on the east coast from Scotland to East Anglia, but birds move inland in search of food, increasing the chances of seeing one inland.

When to see them
October to March.

What they eat
Berries, particularly rowan and hawthorn, but also cotoneaster and rose.

Amazing isn't it. You learn something new every day. By the way, this has got nothing to do with money saving, or frugality, or being tight, or making something out of rubbish, or cheap cooking, or crafty stuff. I like to cover any topic I feel like, then I don't get bored writing it and you don't get bored reading it.
Toodle pip.
Posted by Meanqueen at 21:25