Eat up all your greens.

Hello. Thank you for your comments on yesterdays post. I'm chuffed that you like the poem, and thank you Joan for sending it to me.
I've been to visit Helen this morning, we took her dog Henry choc lab for a walk, with Angus and Guinness, two other dogs she knows. Rocky came with me but he stayed in the house while we went out. He has been there many times before so he is fine with that. He has had three short walks today, it's best that we walk alone then he can go at his own pace, he can't keep up with other dogs.
Here is a variation on the felt hearts, why not make felt miniature Christmas stockings as well, to hang on a tree. I have made five and they are so so cute. The tiny sequins were fiddly to pick up and the silver braid was awkward to sew around the top edge while holding the back and front together. I have put a bit of stuffing in to fill them out. 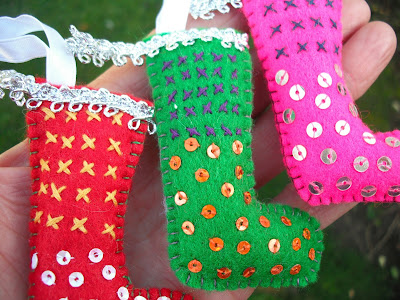 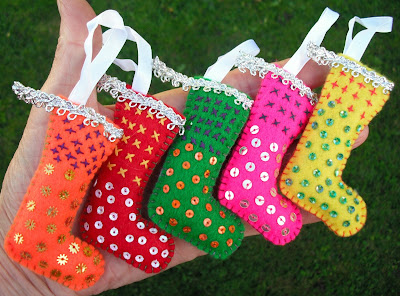 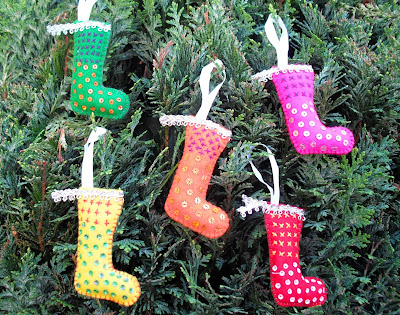 Do you remember the cushion covers made from men's shirts? I made the one on the right a few months ago, and the two new shirts, charity shop £1, have now been made into cushions. So now there is a matching set of three, I deliberately chose stripes again. I am pleased with them, they will be sold on our cat stall at the Christmas Fair. 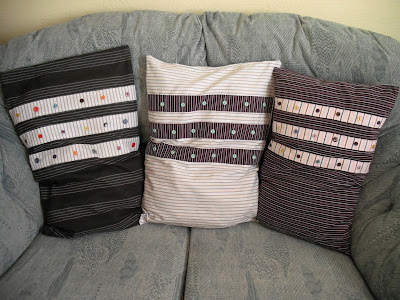 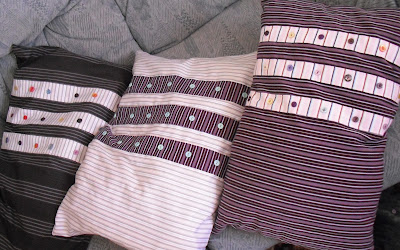 Oh no, I have gone and done it again. I said I wasn't going to buy any more of the mayo in a plastic bottle because of the difficulty of getting it all out, unless you cut the bottle in two pieces. The trouble is that it was only 20p a bottle along with the sweetcorn relish, so how could I not buy them. I'll just have to put up with the inconvenience of shaking the bottle like crazy and bashing it on the work top, then slicing it in half with a knife, and finally washing the two pieces of plastic to go in the recycling bin. 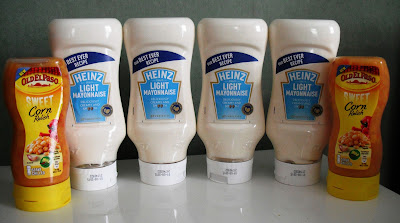 Dinner the other day. Quorn is or was on offer at £1 a bag, so I stocked up with sausages, fillets, and nuggets. Added to a plate of steamed greens and it's the ideal dinner for me. 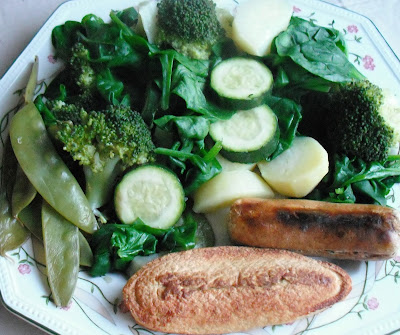 Courgettes, pickled onions, one mushroom, and spinach cooked in a bit of oil, and add two eggs and scramble them. Serve with iceberg lettuce and cucumber. Very nice. 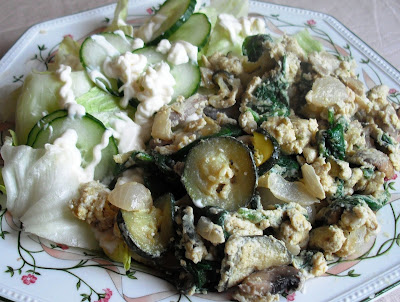 I took Heidi to the vet yesterday late afternoon, for blood to be taken for another test. On the way back I popped in the Tesco Local. I was lucky enough to get a few items. Small bottles of fresh milk 5p each, I got three. Spinach 22p. Potato salad 7p, I got two, and pasta salad 68p. Total cost £1.19p. So this was my dinner last night, a no cook meal, half of the potato salad and half the pasta salad, eat it out of the tubs to save on washing up, ha ha. Have eaten the rest for lunch today. 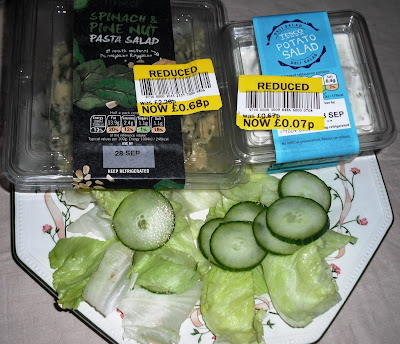 It's been lovely out in the garden for the last few days. I am making use of the summer house and sitting out there busy sewing. I think I'm going to get rid of the raised beds over the winter and give up on veg growing. I fancy making a flower garden instead.

Thanks for popping in. Catch you soon. Toodle pip.