Hello. Eeee by 'eck, I do lead an exciting life. Who else would go, 'oooh, I must have that mop, it's lovely and soft.' Did I buy it because I needed a mop to clean my kitchen floor? No. I bought it because of the softness of the fibres, and because it had been reduced to 99p, and if I took it apart I could make something with it. Maybe incorporate it into some arts and crafts project, possibly. A bit bonkers eh! 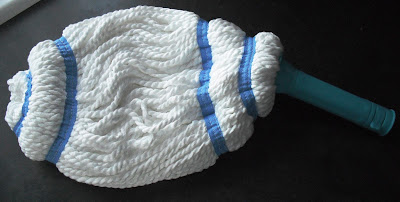 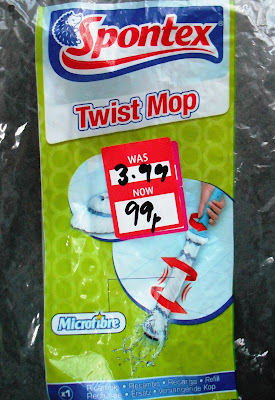 The blue bands were stitched on so a lot of careful unpicking. The fibres were attached to the plastic bit with cable ties so a sharp stanley knife sorted that out. And here we are, all untangled and wrapped round cardboard. It will come in useful for something. 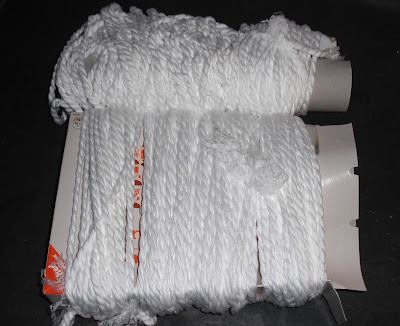 Not a lot happening at Tightwad Towers. It was a dry day so I got a load of washing out on the line. No sun, no wind, so it didn't dry too well, but it had to be done, I was close to running out of clean pants. While I was in the housework mode I got the Dyson out and gave the downstairs carpets a good going over. It's not nice walking on cat litter in your socks. Some of that was my fault, not all the cats doing. I wasn't looking where I stepped the other day and my foot caught the edge of the litter tray and tipped it up. All clean now once again. I had shopping bags to unpack from three days ago, and the pets food cupboard to sort out. Then I did a Rocky bimble, and a Lady dog walk. I've made a big pan of veg stew so I don't have to cook for three days. Brussels sprouts, carrots, onions and a tin of mixed beans. Not sure that is a good combination ;o)

I got a bit wet while doing my walk tonight, it rained. Only did two miles on account of doing a one mile dog walk earlier. I am recording my progress on the Walking Forum. Several people on there are doing it as well. If you want to see how they are doing, take a look here. Some of them are experienced walkers though, they are striding ahead. As it's on a forum we can all update ourselves on there.

Howzabout another except from the 1989 diary. Following on from the overnight stop in Hereford. Thursday 12th January. Raining this morning, but warm. I left Hereford at 6.45, not sure of the best road to take. I decided on the most direct. I arrived on site at Llandrindod at 8.45am and was empty at 10.30am. On the way back I rang the office from Bromsgrove, no load. Then rang again from the cafe at junction 5 of the M5, still nothing. I went home and rang from there. The message was load at Balfour Beatty at Derby. I loaded two pieces of tower crane and set off. There was no rush so I pulled in at the BRS Truckstop near Chesterfield for the night. I rang Colin, he was at Poplars Truckstop at Lymm. It's strippers night at Chesterfield tonight, I had a couple of pints and had a laugh with the drivers. Bed at 11.30pm

Friday 13th Jan. No need to rush this morning, I don't have to be in Scarborough until after 10.00am. It's a good job I saw Stringbean pull off the site or I wouldn't have noticed it. I tipped my load at 1pm. I rang the office and Jim said there is a load of plyboard at Hull to pick up. I could have done without that really, but work is slack so they are trying to pull in some extra loads. I had to pick up the paperwork in the city centre before I loaded at the docks. It was 5.30pm when I set off back. I got in the yard at Ellistown at 8pm and rang Colin. It was 9pm when I left the yard and drove straight down to Southampton in my car. It was very late when I got to Rownham Services and Colin was there to meet me. So, on this day, the 13th of January in 1989 I was at my boyfriends house in Southampton.

When I look back at the miles I used to cover, not only driving the truck, but trying to keep up with my social life as well, which was all over the country. It was a crazy but exciting life.

That's all folks. It's 10pm and time to wind down with a mug of hot chocolate. Thanks for popping in.
Toodle pip.
Posted by Meanqueen at 22:03