A five mile walk through my childhood.

I arrived in Burton on Trent around lunchtime on Monday, first visiting Uncle Stan's grave at Stretton Church. I decided to leave my car there while I went for a walk. Stretton is the village where I grew up, so it was a trip down Memory Lane for me.
I remember being taught about Tutbury Jinnie, a train that ran between Burton and Tutbury. The train is long gone and the track is now a very pleasant country walk. It's a mainly sheltered walk through the trees and vegetation on both sides. The information boards tell the story. 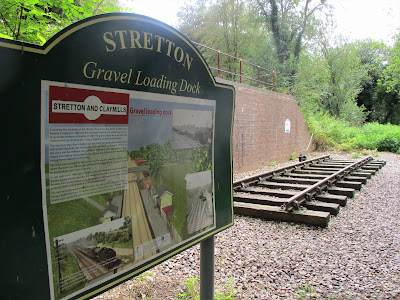 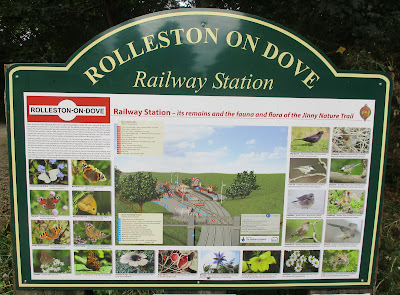 More information about Rolleston Railway Station here.
Coming off the track at Rolleston onto the road, I passed The Jinnie Inn. Jinny can be spelt with a 'y'. This was where Uncle Stan had his 80th birthday party. He had several of his paintings on the walls here, and often sold them. 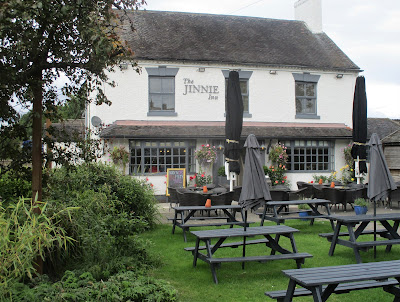 On into Rolleston village. This was the spot where me, my sister, and sister in law scattered our brother Stephen's ashes. His wife had brought them from India where he had lived for many years. Stephen played in this stream when he was a little boy. 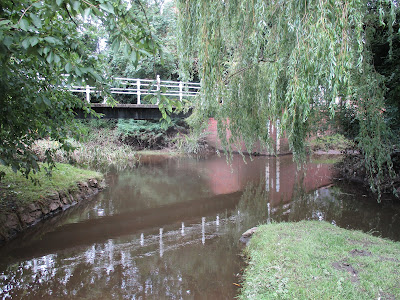 I sat on a bench and ate my lunch, listening to the water cascading down the weir. 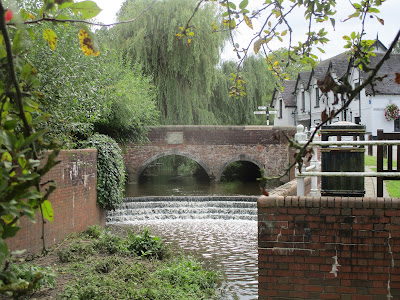 The Spread Eagle where all the family met on the day of the ashes. I remember visiting this pub many times when I was a teenager. 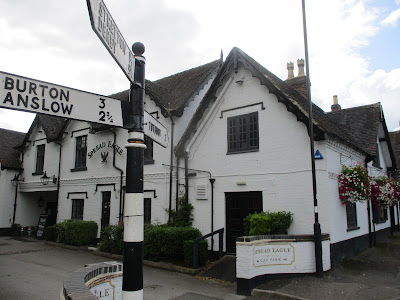 I took the road past the church and walked to Tutbury. It has all changed since I was last here, now has a bypass. Re routing the main A50 from Derby to Uttoxeter means a lot of the villages no longer have heavy lorries driving through them. I remember this school, the first Forest of Needwood Secondary Modern school I went to. I think I was here for two years, then they built a new school at Rolleston, which is now a housing estate. 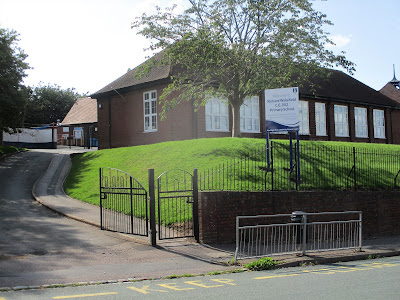 The Dog and Partridge is still here. A popular pub in a prominent position on the High Street. 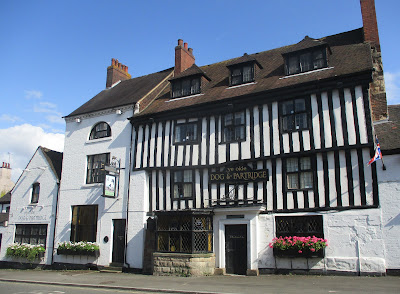 I walked out of the village and just over the railway line into South Derbyshire is Hatton, the home of Nestle, the coffee factory. I was talking to two lads who were sitting opposite outside the Co op shop, eating their lunch. Apparently they still have a staff shop which sells cheap Nescafe and Cross and Blackwell tinned food to the workers there. This was where I got my first lorry driving job. The entrance has changed a lot and the factory is very much bigger than when I knew it. The access used to be down a narrow lane next to the pub on the corner. It is now opened up and is much wider and easier to turn in and out of. 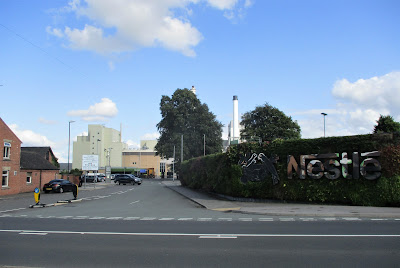 One more landmark to look at before I head off back. Tutbury Castle. Sadly, at ten to five, it was not open. Strange that there was no sign on the big wooden doors giving the opening times. A couple of snaps from outside the boundary. The sun was not in the right place so they are not very clear. 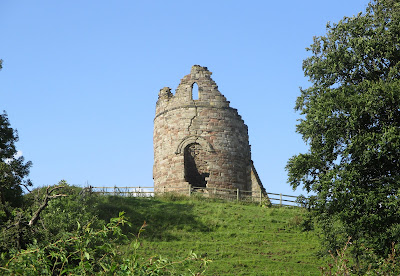 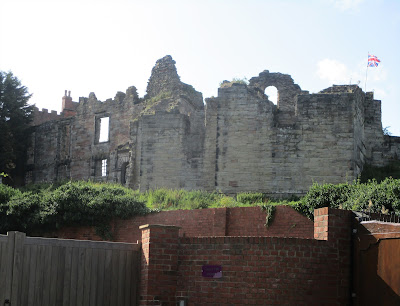 It was time to get back to the car, so I picked up the bus back to Stretton. I made a point of getting off near to where I used to live. Amazing transformation of what used to be a jungle with three kids running riot in it. It was so much fun having a garden where we could please ourselves what we did. 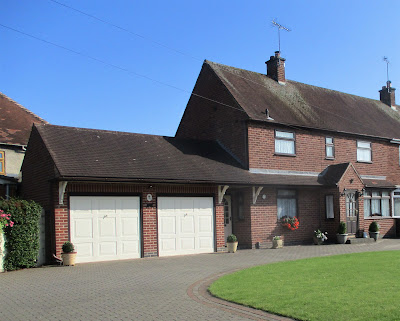 I checked into the hotel at 6pm, then went off to party. Five miles walked today, a longer one planned for tomorrow.
Toodle pip.  Ilona

Email ThisBlogThis!Share to TwitterShare to FacebookShare to Pinterest
Labels: reflections on life, walking