I'm a bit late in getting this out tonight, all because I had to watch Terry Miles, Brendan, and Anthony, along with another brilliant pianist Ben Toury, who came over from France to join the session at St Pancras. All Terry fans go onto yoootooob and look for the live stream they did today, be warned though it is an hour and twenty minutes long, but if you are addicted like me, you just got to watch it all. I thought Terry and Brendan were amazingly good, but Ben is something else. That lad has the makings of a long career in music.
The reason I didn't watch it earlier was because I have been out most of the day. This morning I went to the Scrapstore at Hull. They started a new Chat and Craft group so I went to show my support. We did some decoupage, I haven't done this before so something else for me to learn. I quite enjoyed it, now I want to decorate everything I can get my hands on. 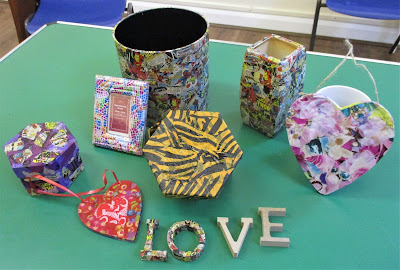 My first effort, a small box. Although I am not a fan of using glue, don't want to get my fingers sticky, this can be done by picking up the bits of paper with a brush. 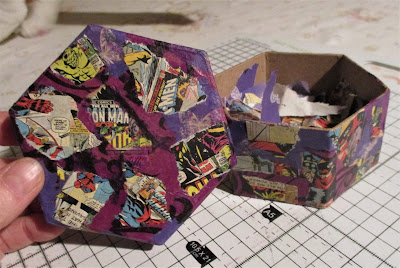 I picked up a bargain at the Scrapstore, found a double bed quilt, it has pink flowers and a pink frill around the edge. It was only £5, fantastic.

From there I went to pick up my Samsung Netbook from Keith the computer fixer upper. He has given it a good going over, and installed Windows 10. I won't have time to try it until Saturday because I am busy again tomorrow.

On the way back I popped into 20 21 Arts Centre to see a new exhibition, and have a natter of course. Then pick up a few things from Aldi. Had run out of porridge oats, needed some more. Also the car needed petrol, there is a garage further along the road.

That's it for now, I am starting to yawn. Toodle pip.  ilona
Posted by Meanqueen at 20:32

Email ThisBlogThis!Share to TwitterShare to FacebookShare to Pinterest
Labels: Scrapstore