The pics are flying on tonight, so I might as well get these from day one posted up. Sorry but they are out of sequence with the rest of the trip report, so cast your mind back to the beginning. I left Ellesmere Port on Tuesday morning after having a fab night with my friend Linda. The route from her house took me past the second biggest Marks and Spencer store in the UK, the biggest being at Marble Arch London. The Coliseum Retail park is a massive place. I went past Blue Planet which is claimed to be Britains best aquarium. Passing underneath the M53 motorway, and headed towards the village of Stoak, I saw a sign on the grass verge saying Stoak Country Park, a park for a peacefull and quiet walk. I laughed, I don't think so with the motorway traffic roaring by.
Through the other side of Stoak I joined the Shropshire Union Canal, and passed under the M56. The traffic noise was particularly loud at this point as it crosses the M53.
Looks like someone has set up a permanent home in this barge. They have built steps into the bank from the road, and planted up a vegetable patch. They have cobbled together a shed from scraps, and there is a settee to sit out on and relax in the makeshift garden. 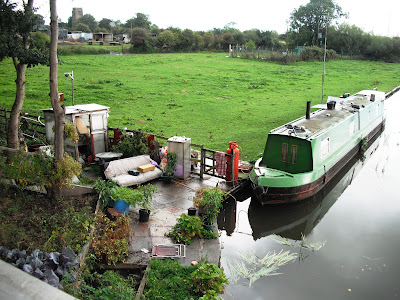 I followed the canal right into the centre of Chester, and decided I could spare a couple of hours to look around. I tried to follow the wall around the city, but there were some parts of it which were closed for maintenance. I got myself a free map from Tourist Information. The place was very busy with visitors. I noticed that there are a lot of very attractive black and white timber buildings. 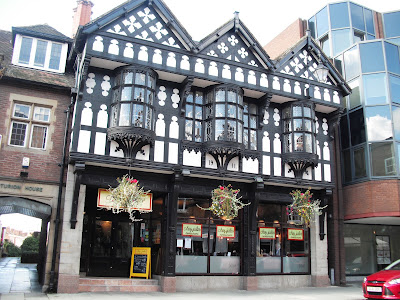 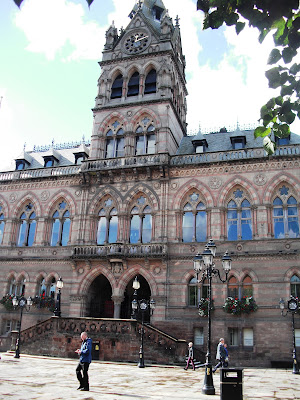 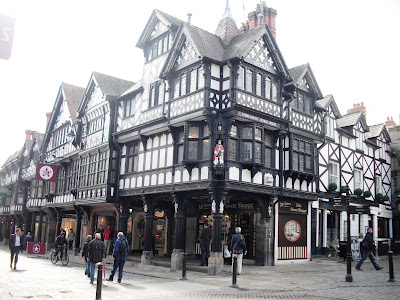 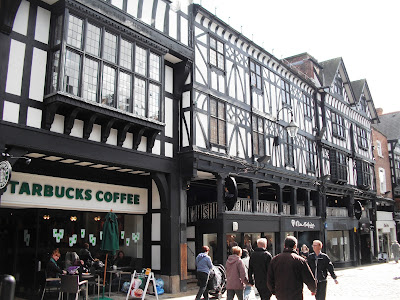 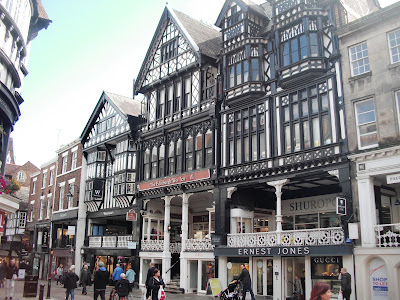 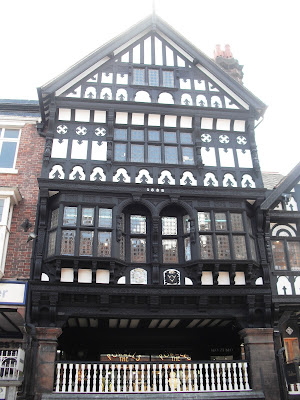 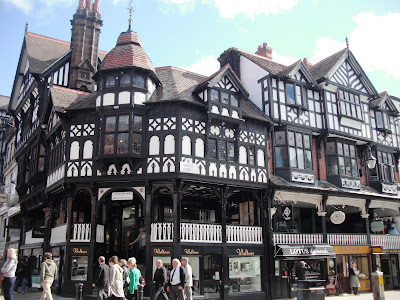 There was a charge of £5 to go in the Cathedral, so I didn't bother. I must say that it looked more like a big church from the outside, nothing spectacular like some cathedrals I have seen. 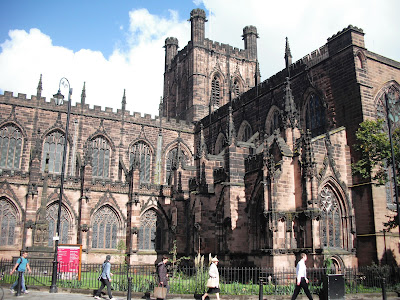 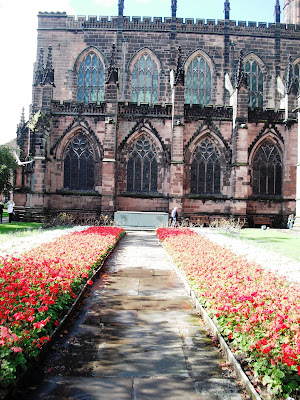 This lovely ornate clock is on top of the wall which goes over the road. 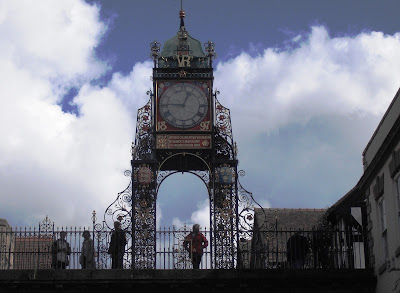 I climbed the steps for a closer look. 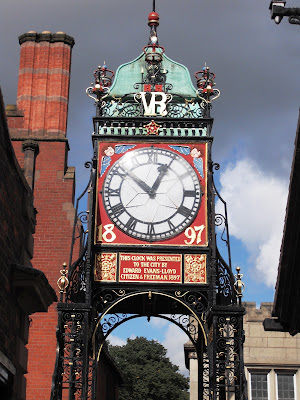 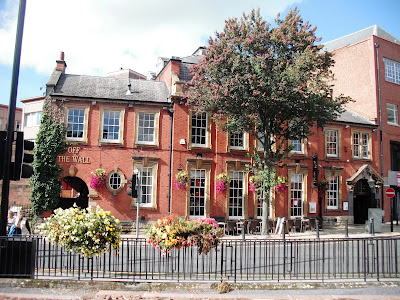 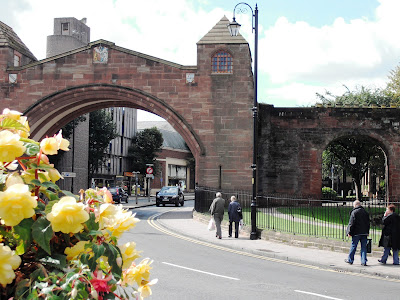 Nobody going out on the boats today. 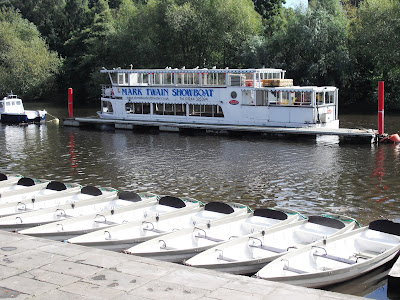 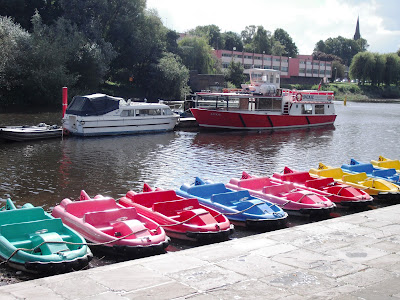 There is an open air Roman amphitheatre. Several school parties were having a history lesson. 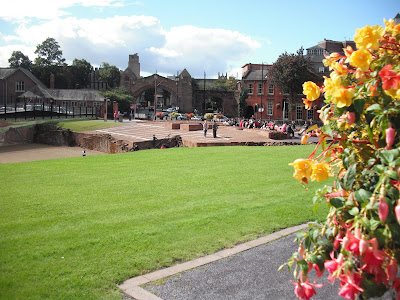 I just caught the tail end of this old crock, coughing and spluttering along at two miles per hour. 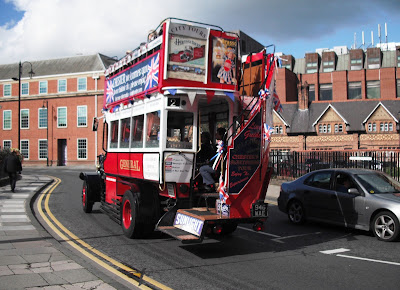 The ruins of this church have been left standing at the back of the rest of it, which has been rebuilt and repaired. 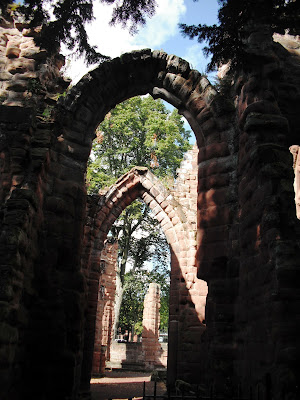 The suspension bridge over the River Dee is having some repairs done. 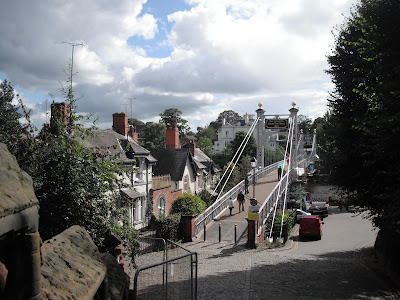 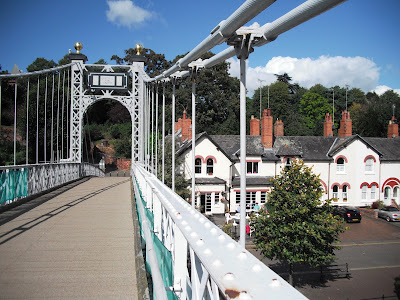 I picked up the canal again at Boughton and continued to follow it past Christleton, through Waverton, past Hargrave, and came off at the marina and headed for Huxley on the road. It was 5 pm and I was ready for finishing. A call to Mo and she came and picked me up and took me to her house. The rest you know I think.

Chester needs a whole day to look round, but at least I gave given you a taste of it. Hope you like my pics. Maybe I'll make another trip there.

I've been listening to Tom Jones on the tele while writing this, there are loads of channels to chose from.. He sounds really good, still a good blues session singer. At least it drowns out the bump bump bump from downstairs. Toodle pip.
Posted by Meanqueen at 22:43