Hello. The signal is intermittent tonight, but I'll soldier on and type a bit slower so it can keep up. I made Chorley, 21 miles walked today. The first two hours was on tarmac out of Southport. Then across fields, along farm tracks, canal tow paths, and some minor roads, so a bit of allsorts really.
I passed a big Tesco on the way into Chorley and got some yellow sticker food for a picnic in the room. A woman kindly gave me some information about a couple of B & B's that I might try, so I followed her directions. The first one I tried was full, but the landlady invited me in because there was another walker there, who had booked a room but there was a mix up and she couldn't accommodate him. She felt obliged to find him a bed elsewhere, but she wasn't having much luck on the phone, it seems everywhere was full. Then she got us both in her car and took us a few miles to a Motel that she knew of. Yes, they had two rooms, so here I am at the Charnock Farm. They don't serve breakfast here, so she is coming back at eight in the morning to take us back to her place where we can eat. What a palaver, but at £45 for the room and I'll have to pay her for breakfast it's still cheaper than the Premier Inn.
The weather wasn't kind today, it was what I would call mizzle. Not rain but heavy mist, I didn't get wet, but it was not good for photographs. No sun and very overcast.
I walked past this beautiful church on the way out of Southport. 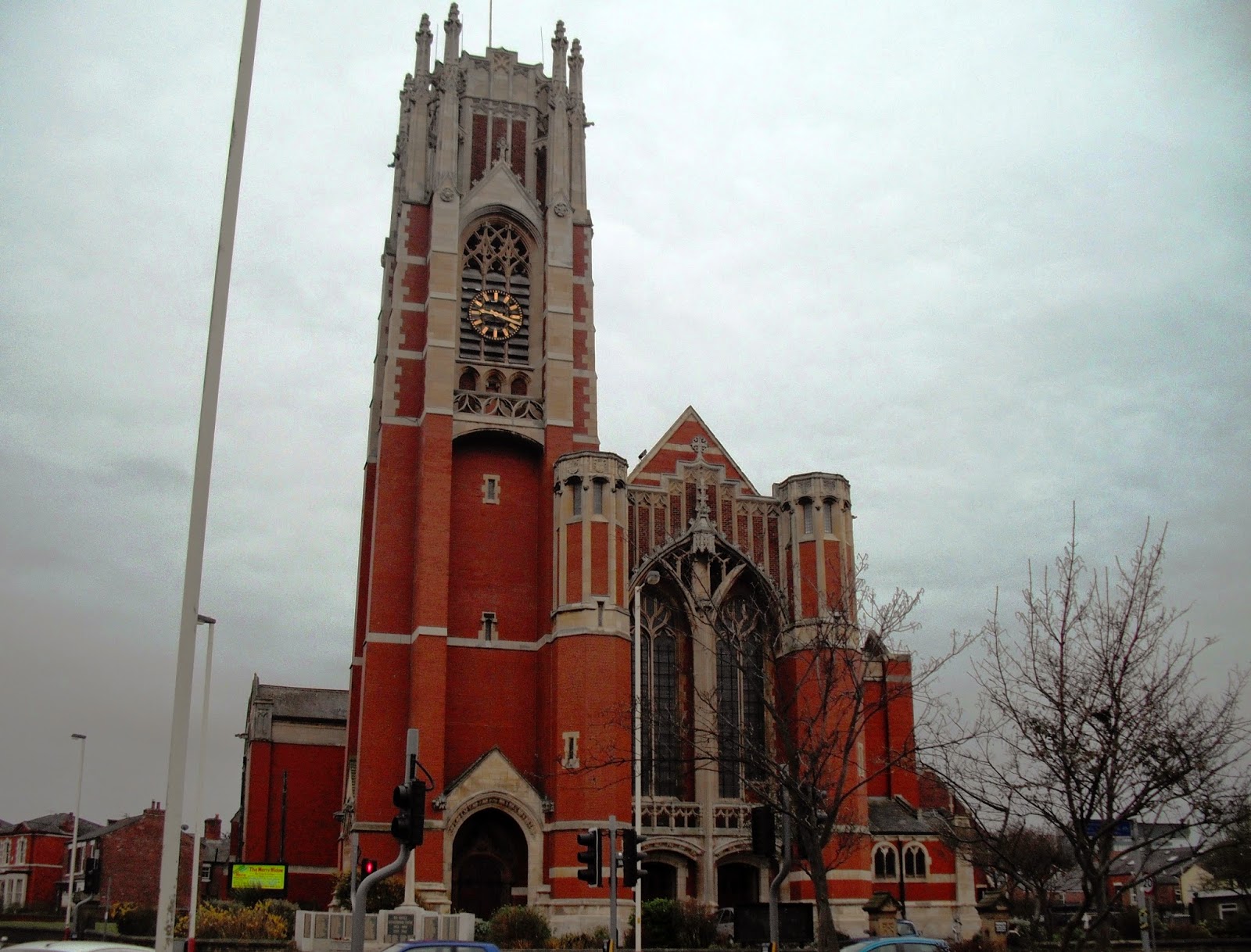 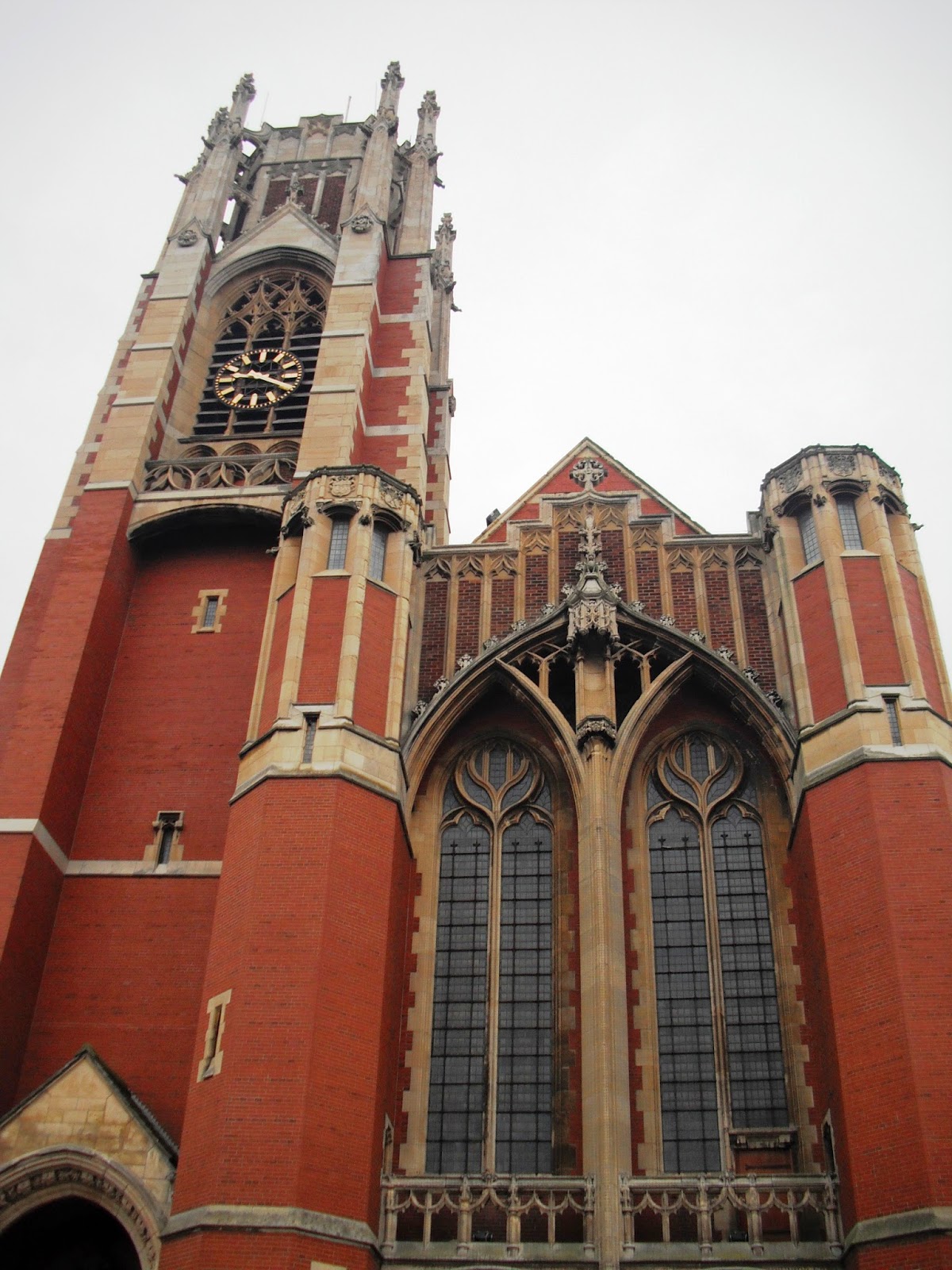 My route took me along the A570 to Scarisbrick where I took a minor road, the tracks, then onto the canal to Burscough. Another fine church, seen at Bescar. 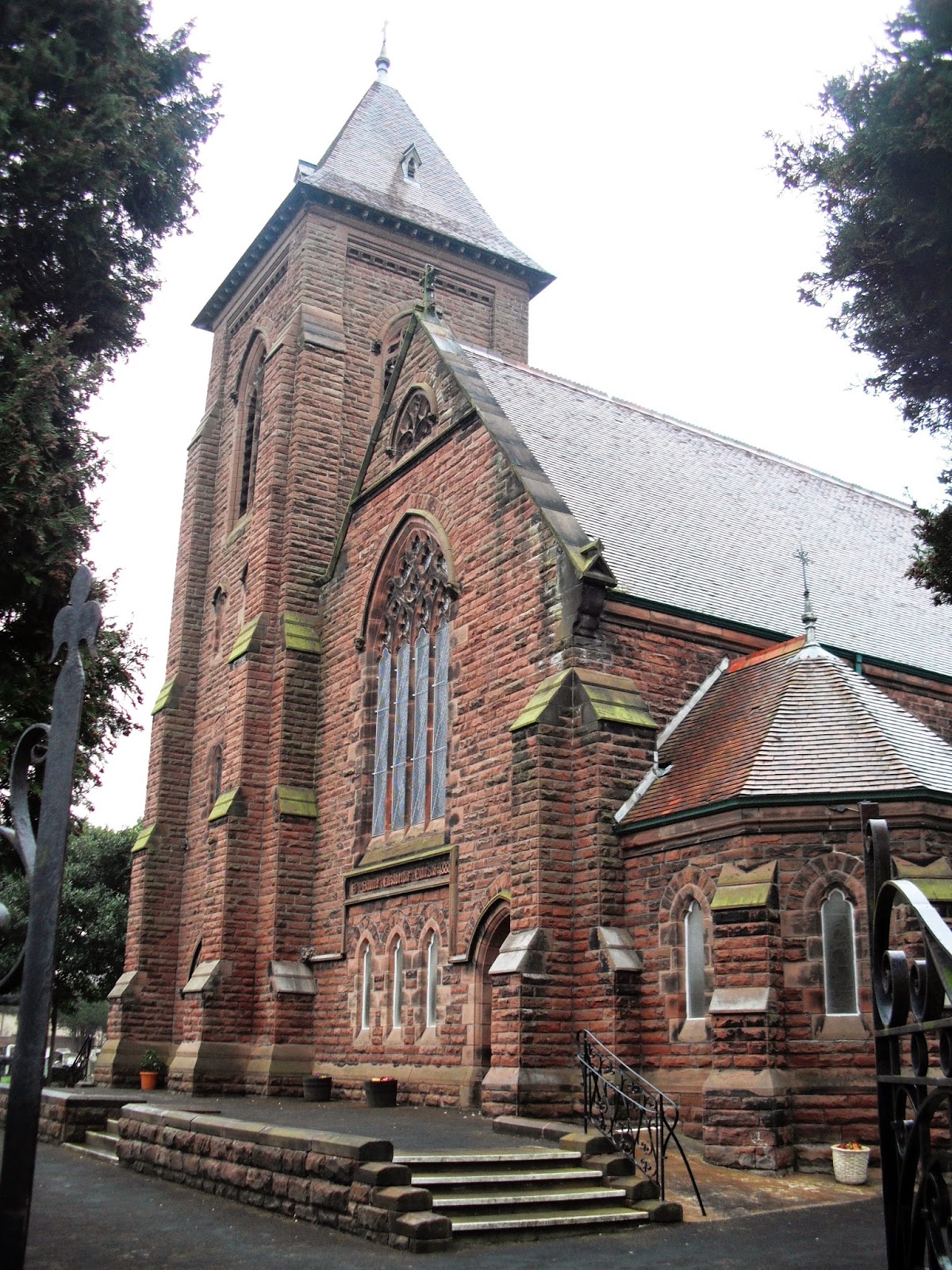 Not many boats on the move on the canal. When they want to go under this bridge the traffic lights go to red to stop the traffic, and it's lifted up. 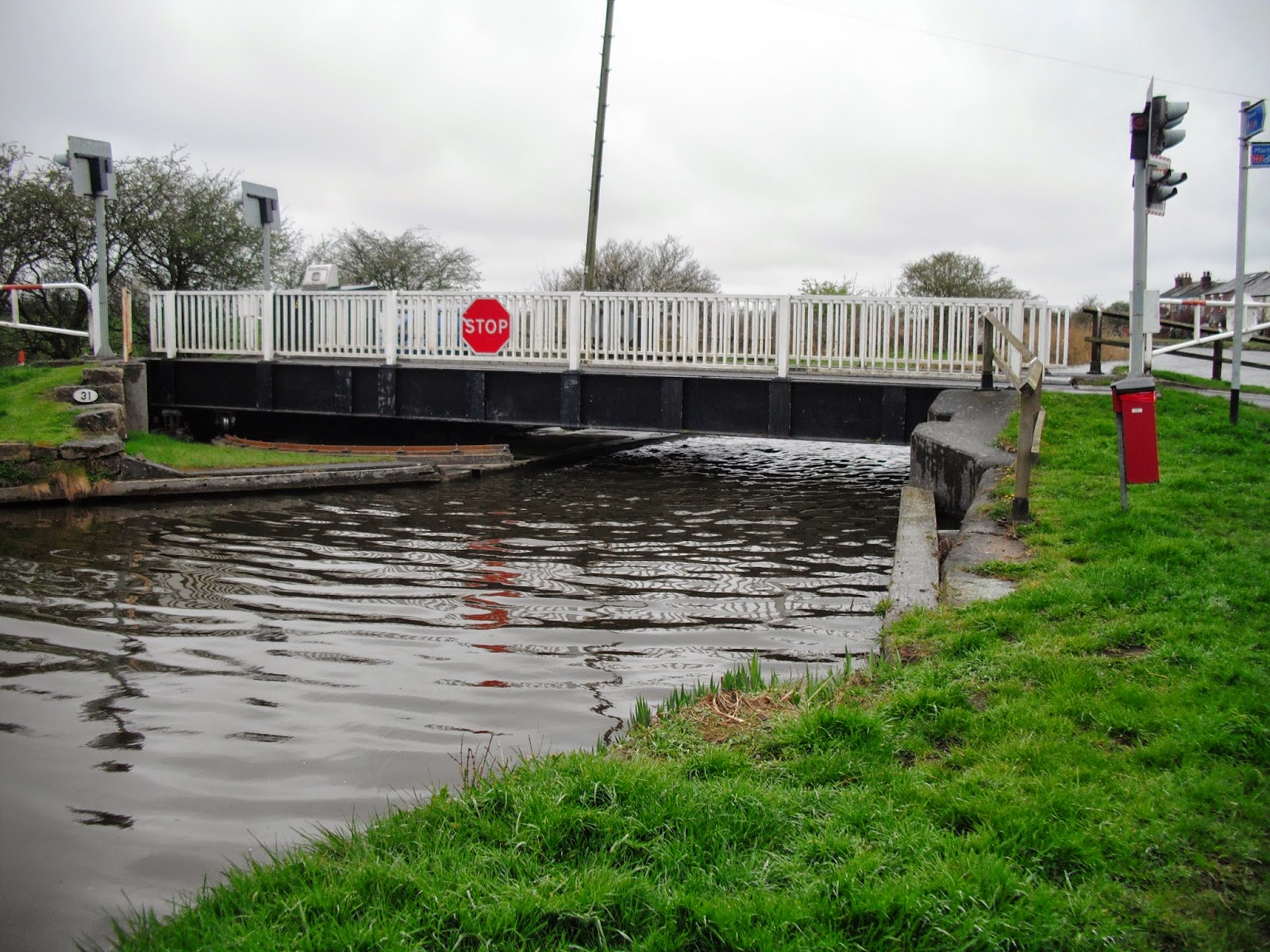 Coming into Burscough there is a grave yard for old fairground rides and trucks. These two don't look too bad, but most are complete wrecks and are rotting away. 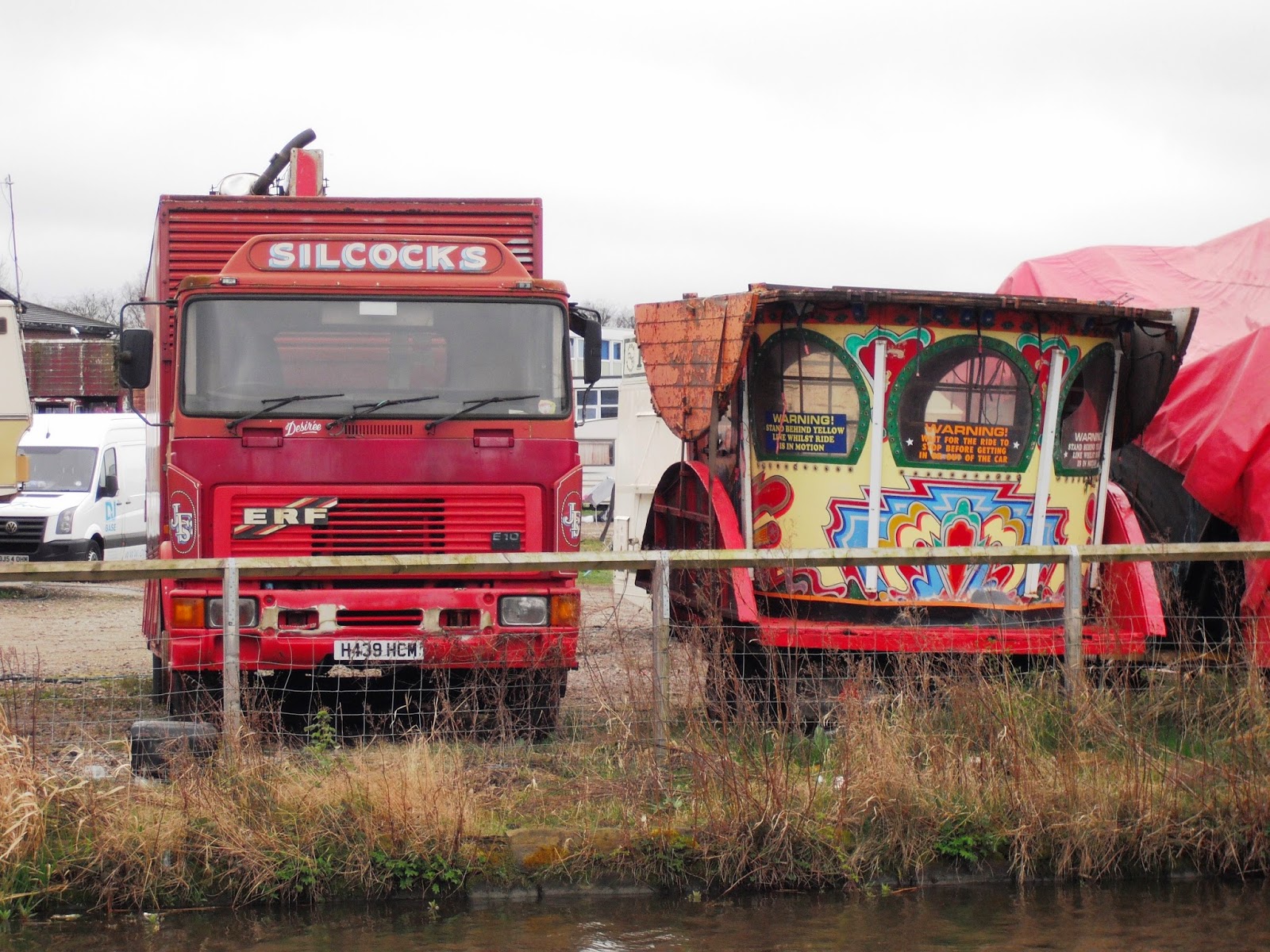 This is the bridge where I left the canal, and joined the road towards Rufford. 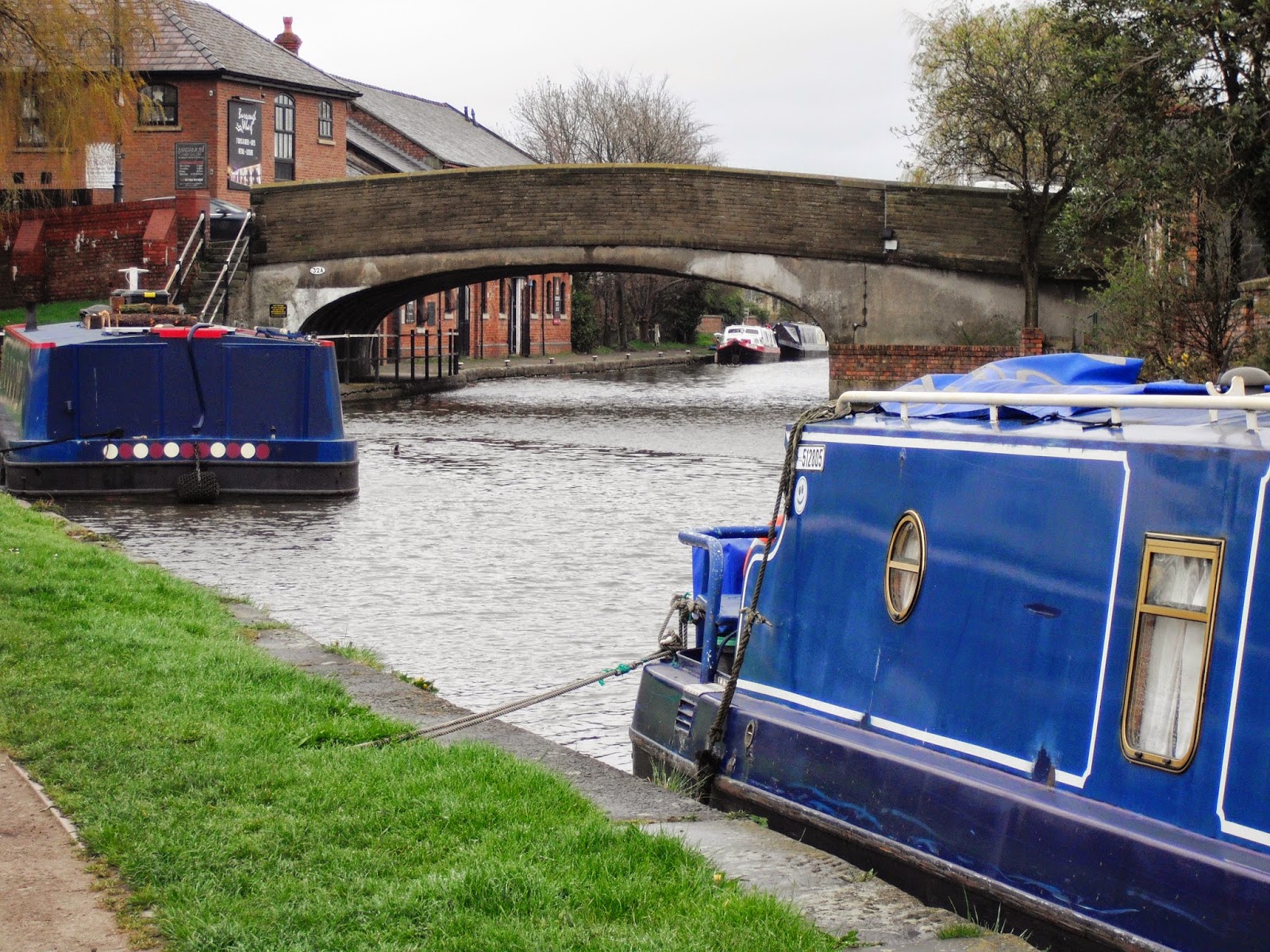 For a short distance I got off the road and went back on the canal tow path. This is the Marina at Rufford. 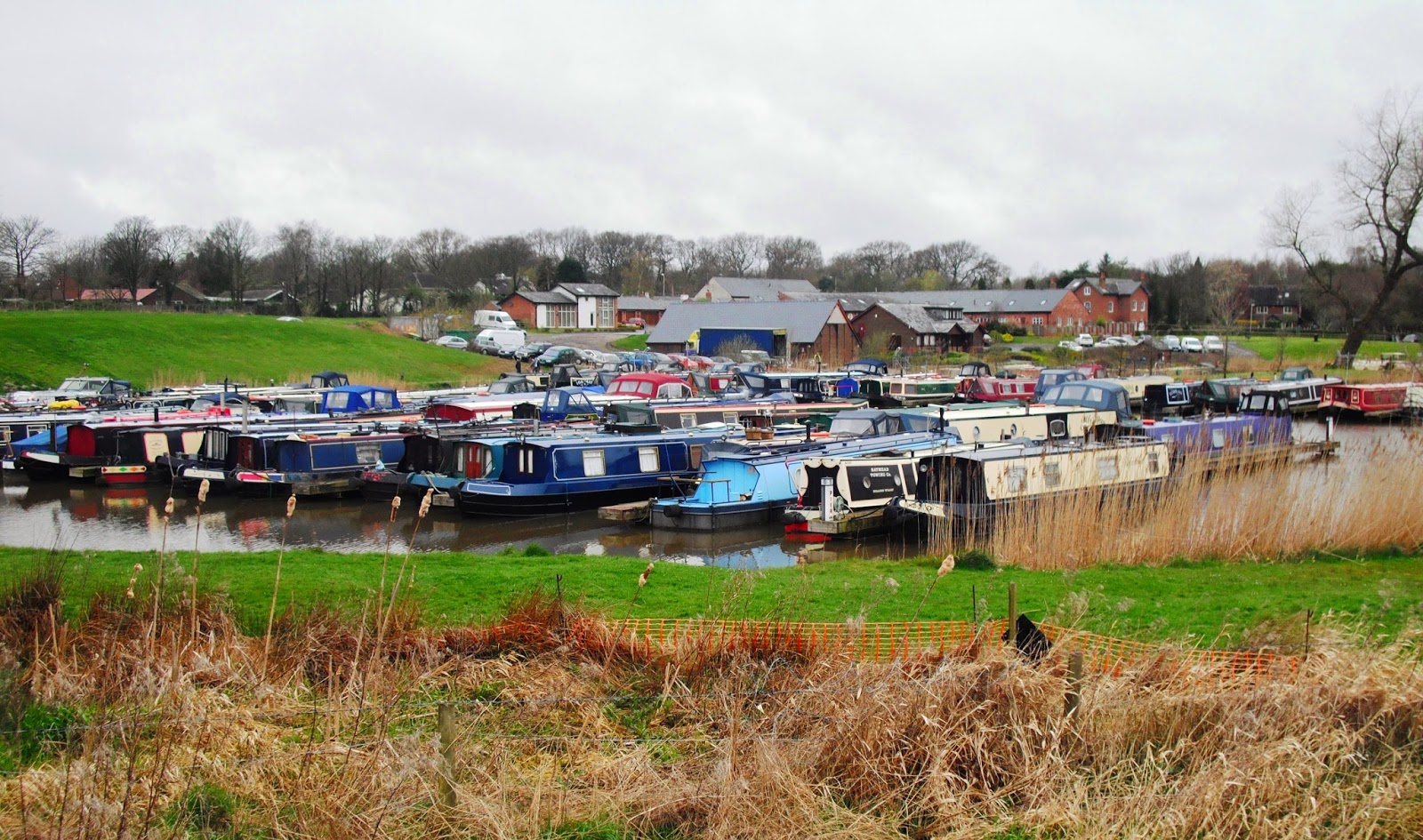 The church at Rufford provided me with a bench to sit on for a late lunch. This is the view from my bench, kind of spiritual I thought. The weather had improved by then and it was brightening up. 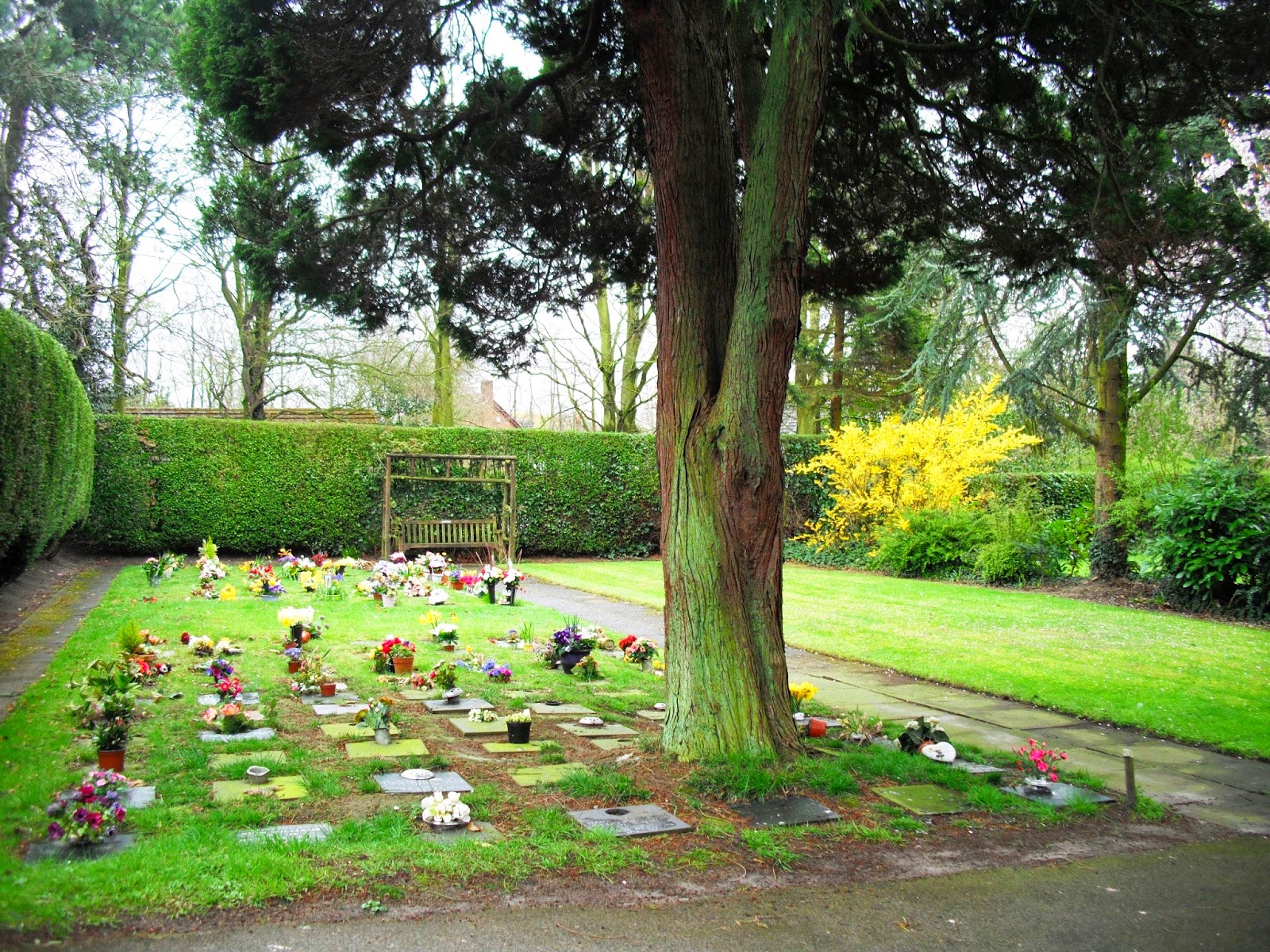 From then on it was a long trek over fields towards Eccleston, which then joined a road into the village. I love this twisted tree. 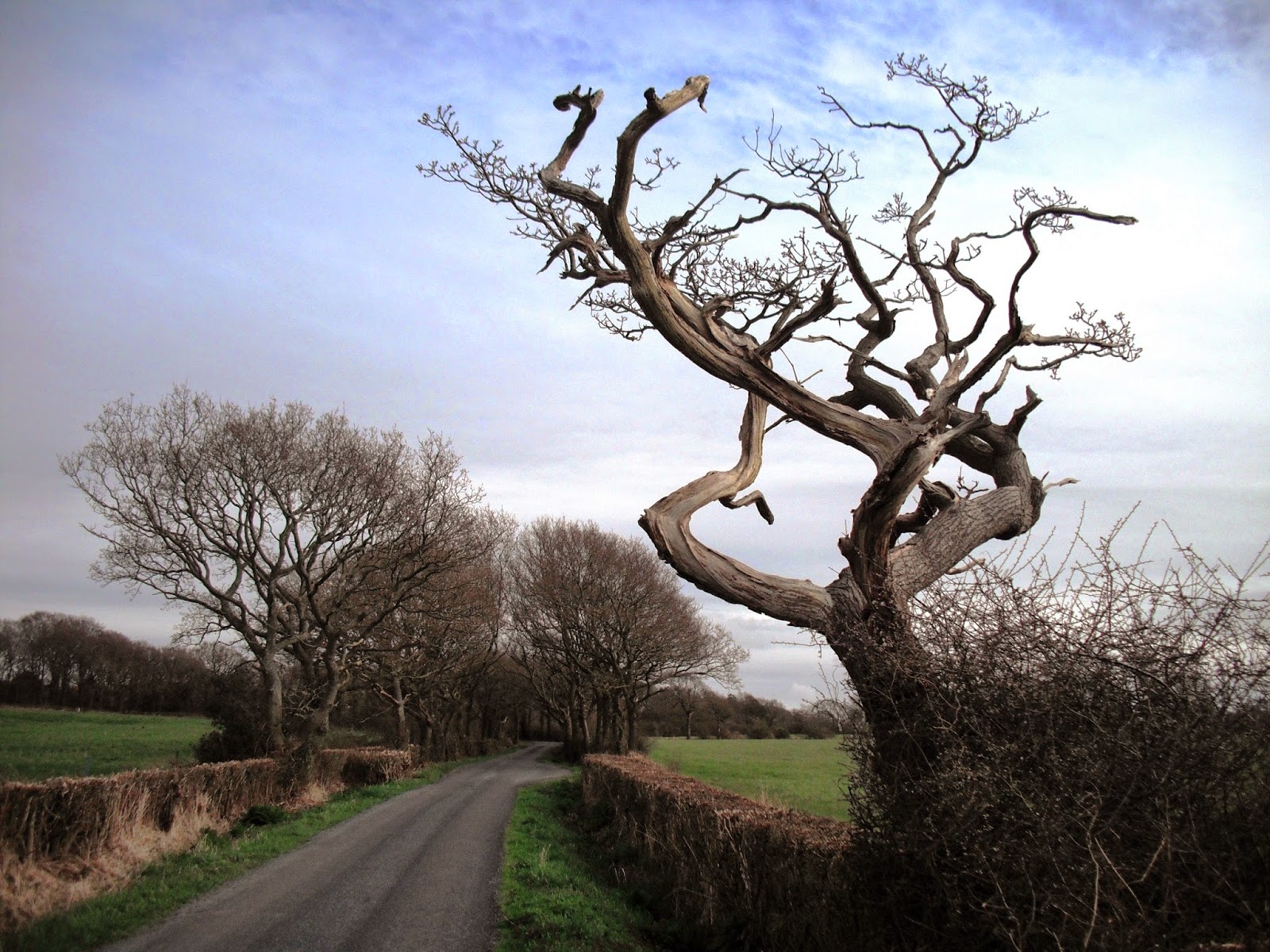 Crossing over the M6 Motorway just North of Charnock Richard Services. It was quite busy on the Southbound side. 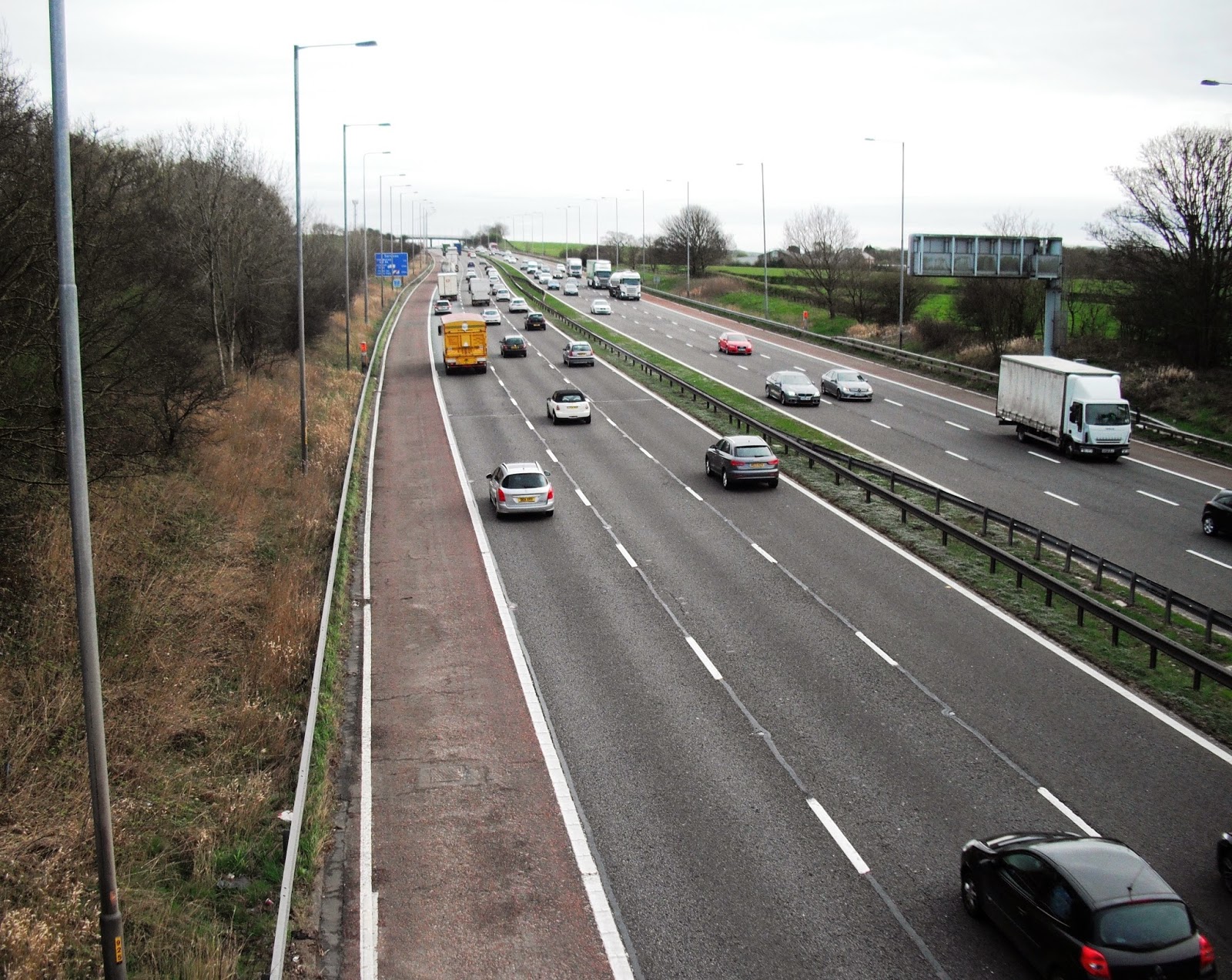 I thought this was a very unusual barn, it's very tall, with brick built columns supporting the roof. Logs for the fire are stored inside, it looks more like a monument than a working barn. 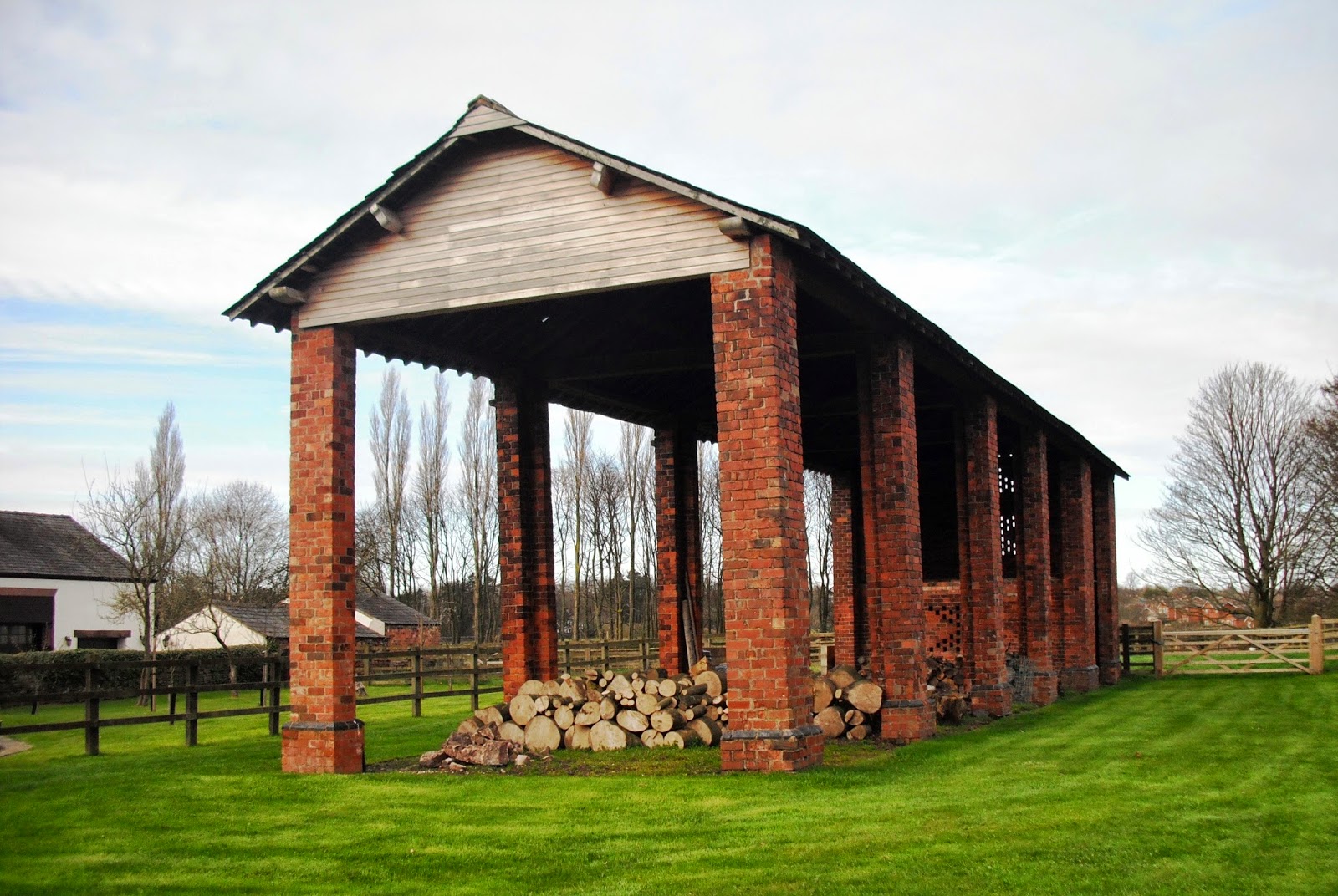 From there on it was just a matter of following the road into Chorley. Tomorrow I shall be heading towards Darwin, then on to Haslington and Rawtenstall. Up to now I have been walking through rich, dark brown agricultural land, but it's going to get a bit hilly, lots of contour lines on the map. Only one blister so far. My back pack is a bit lighter for this trip because I've left the computer battery at home. Don't know why I have been carrying it around with me, the computer works fine without it.

Time for a bit if relaxation. I'll catch you tomorrow. Toodle pip.
Posted by Meanqueen at 22:06