The good life at Tightwad Towers

Hello. Hasn't it been glorious today. The weather forecasters got it wrong, no snow here. Only five of us at the Crafty Club this morning. Twas quite pleasant, I actually got to join in some of the conversations. I don't get a look in when a dozen people are all yacking ten to the dozen, with three or four smaller conversations are going on at the same time, ha ha.
I am playing around with the small Kenwood processor, it's very handy to be able to chop up small portions. Yesterday I did some vegetables, it only takes a few seconds to turn them into crumbs. My idea was to cut down on the cooking time by softening them in this microwaveable steamer and eat them. I gave them three minutes, but the taste was a bit bland, so I ended up transferring it to a saucepan with the water, adding a few spices, bringing it to the boil for a couple of minutes, and eating it as soup. It was very nice. Chopping things up small is a good way of saving on the gas as it cooks a lot quicker. 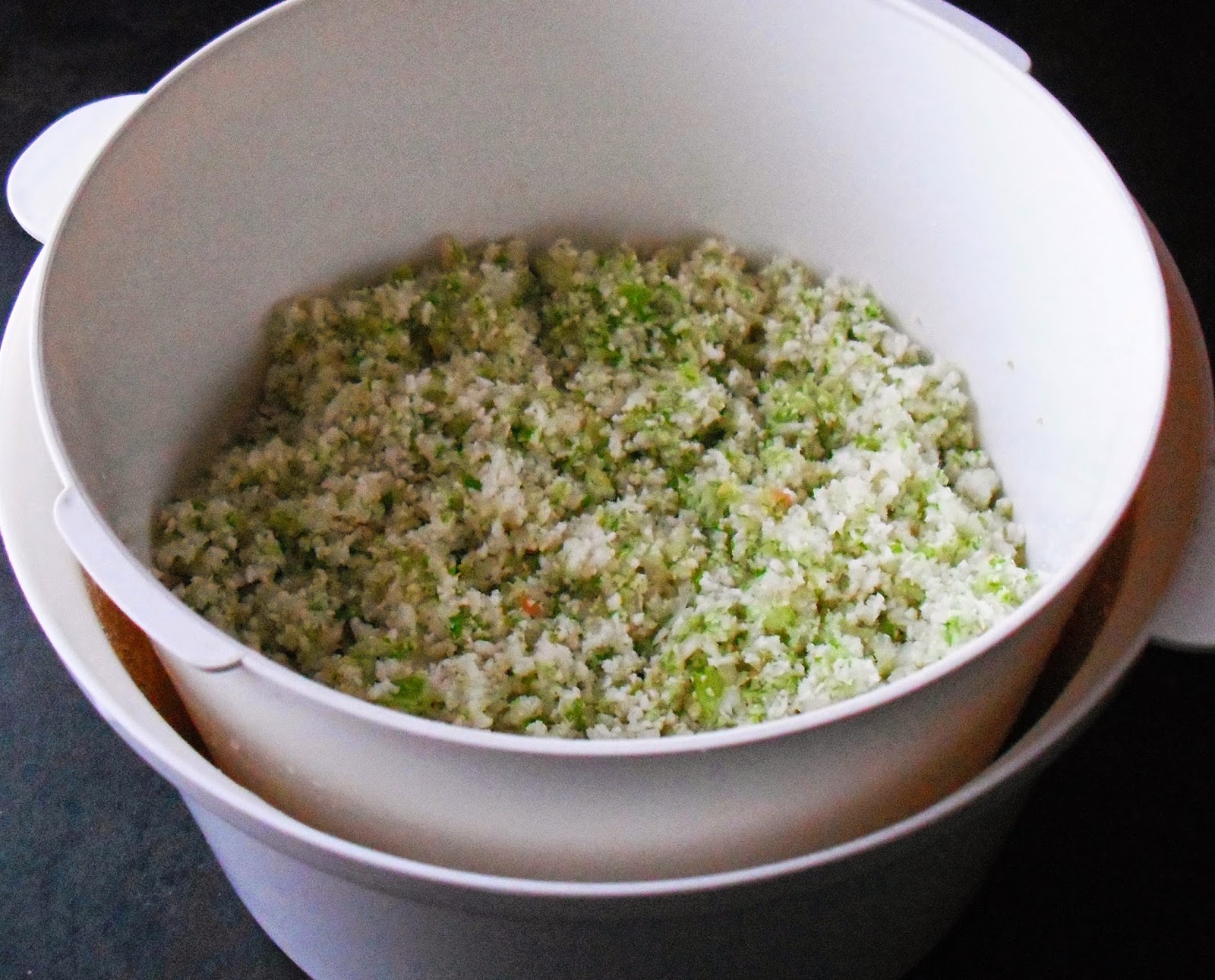 I used it again today, chopping my vegetables very small and eating them raw. I put in carrots, half a leek, three brussels sprouts, cauliflower plus leaves, spring onions, and added some already blitzed seeds and a bit of grated cheese. Can't get much healthier than that. 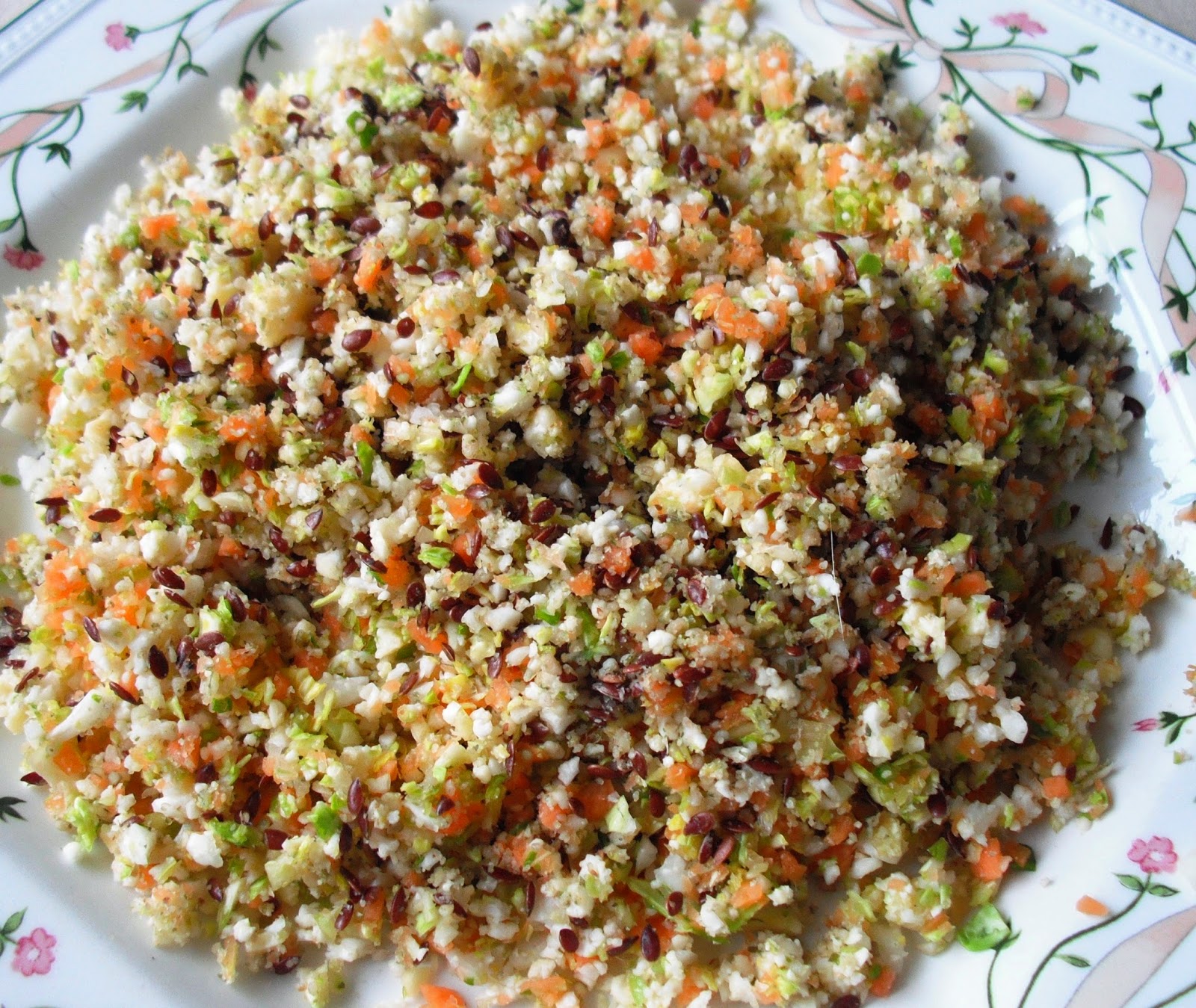 This is a favourite place for a spot of afternoon sun bathing, back leg dangling over the edge onto the radiator, which isn't switched on of course. 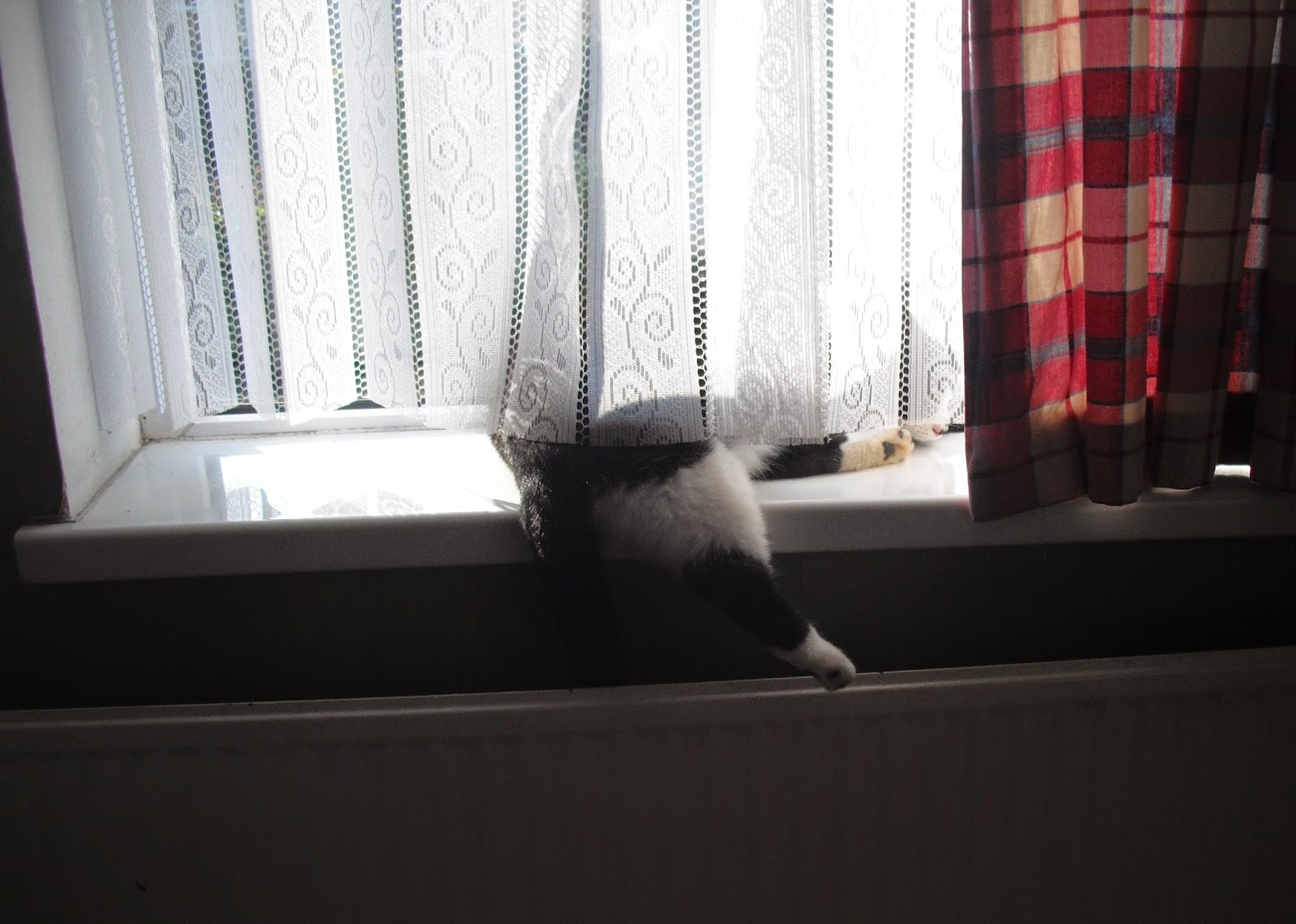 Heidi cat is hiding behind the net curtain. 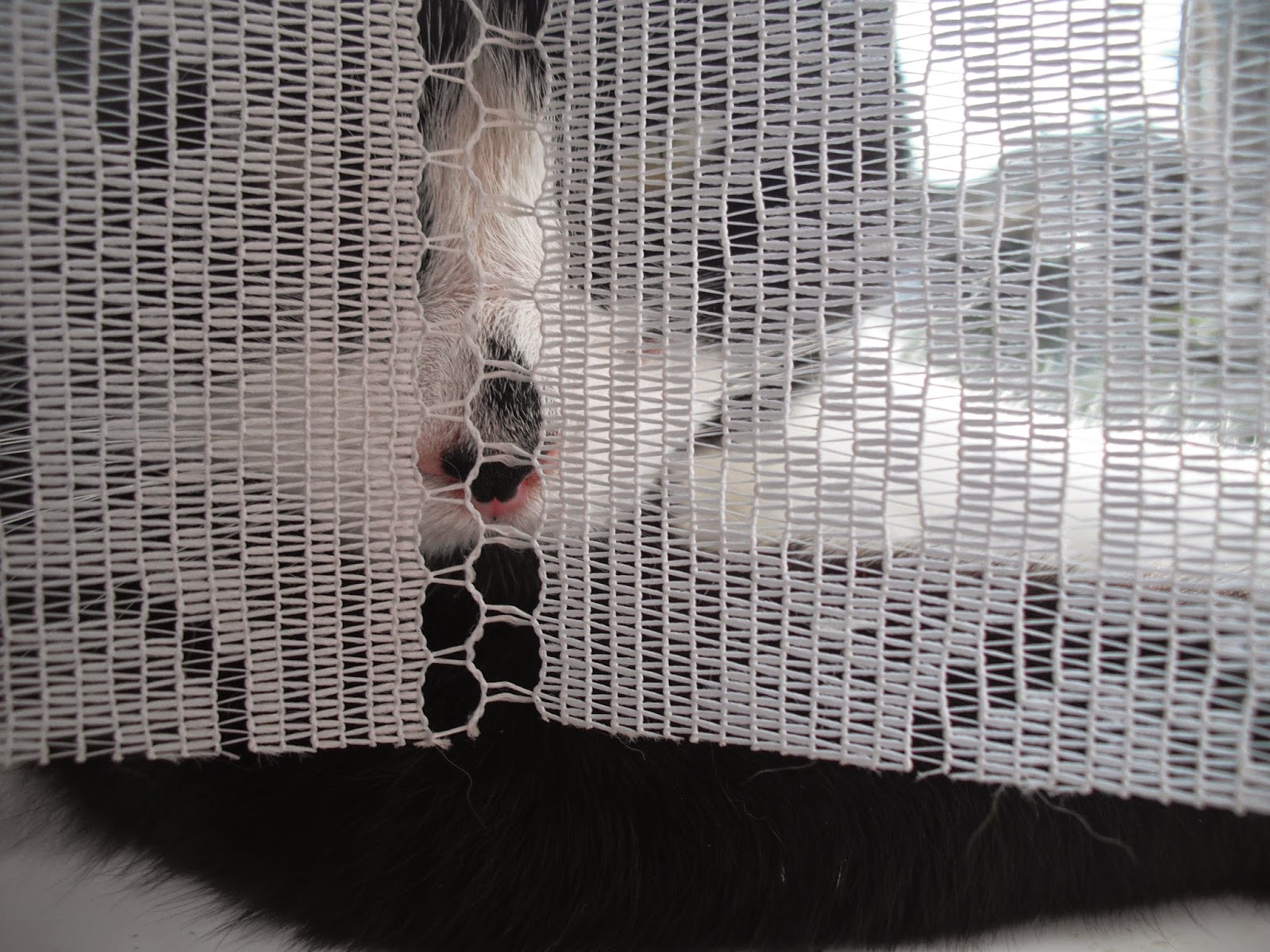 What am I doing here? Why am I scrubbing  old plastic compost bags? Cleaning them with rain water I may add. These are all opened out for use in covering the raised beds in the winter. The beds are being opened up now so they are not needed for that job any more. But they might come in useful for something else. 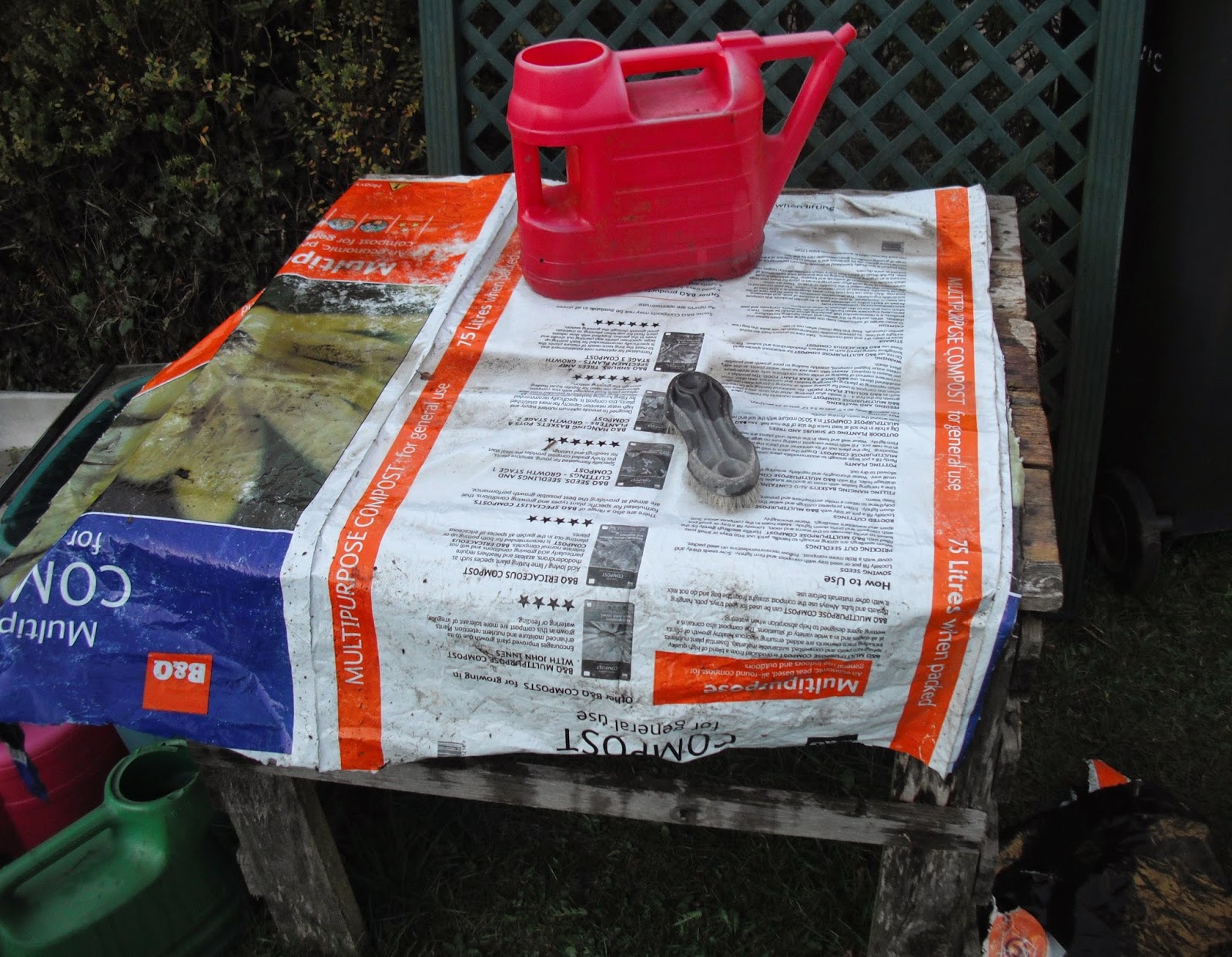 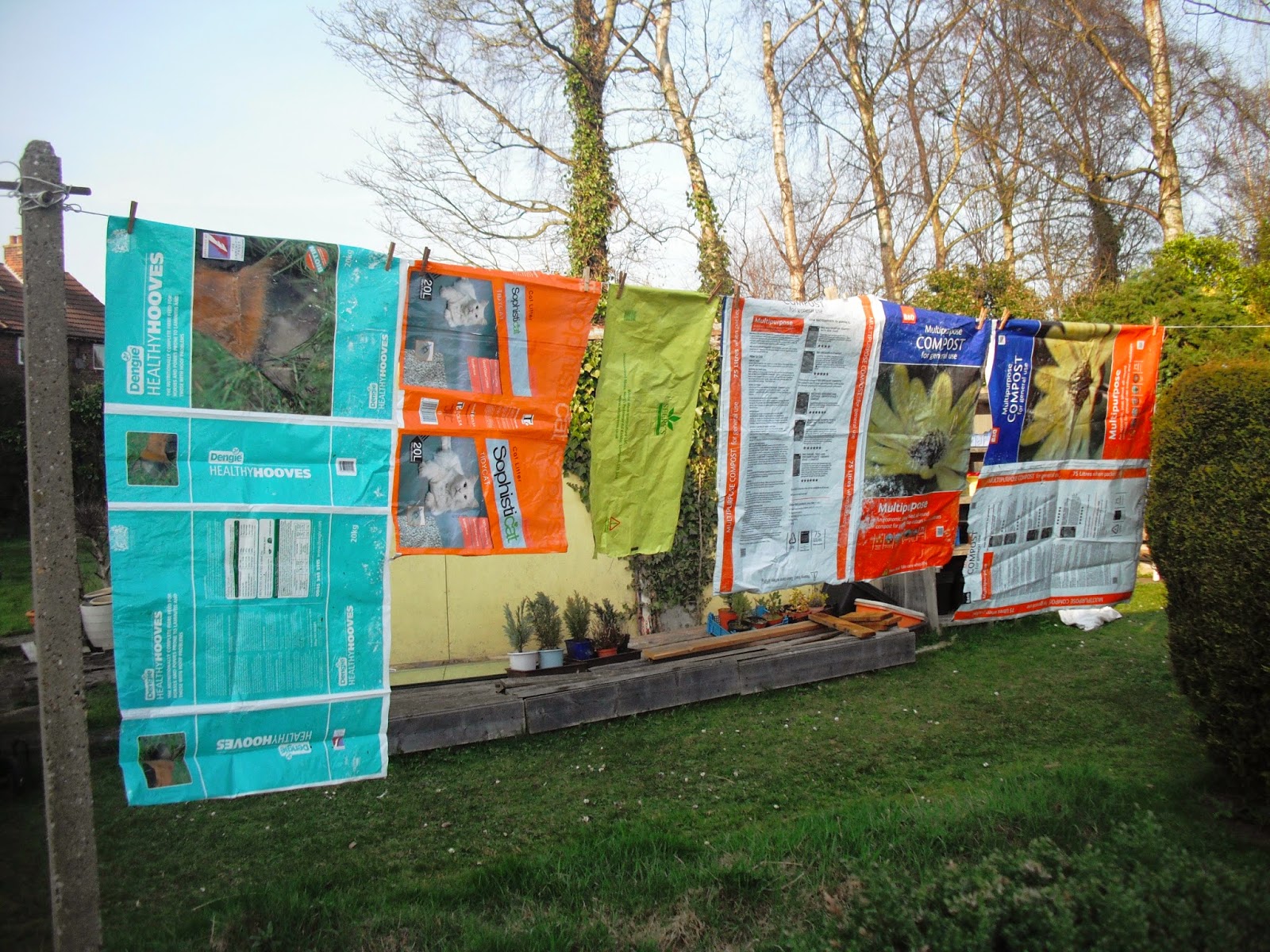 I've been doing a bit more clearance work today. Greenhouse gone, now I need to get the slabs up.  I could do with some more for the base of the summerhouse, must ask around and keep my eye on skips. None on Freecycle and Freegle. Just had a thought, I've got some in another part of the garden, I'll have a count up and see if I have enough.

It's going in this corner which is behind the garage, when I have gathered enough materials. Beyond that green mesh is the neighbours garden which is a bit of a mess. A bit like mine, ha ha. He said he is going to put a fence up between us but I don't know when that will happen. Perhaps he is fed up of looking at my mess. 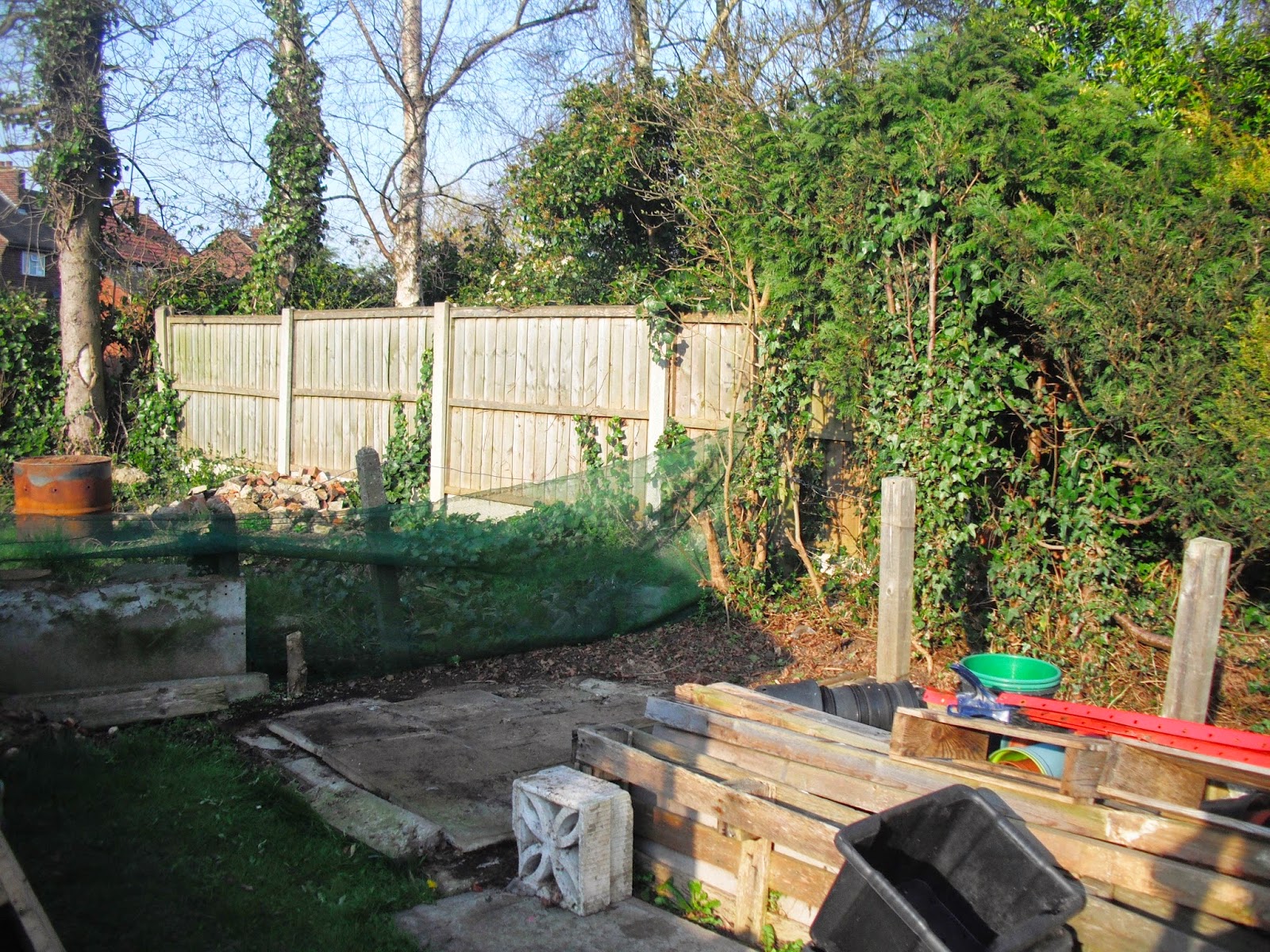 That's all for tonight. I've got two bags to parcel up for posting tomorrow. Must go to town in the morning, pay council tax, borrow some maps from the library, buy some ink for the printer, and buy a rail ticket.
Toodle pip
Posted by Meanqueen at 21:03