Hello. It's all very well making something new out of something old, a bit of upcycling to help save the planet, make do and mend rather than buying new, but it can be a bit boring at times. Using old materials means there is some preparation to do. Things to take apart, and then rebuild. All this takes time, probably easier to  bin things and start afresh with something new. But you know me, I hate to throw anything away which might come in useful.
My friend Bob came round a few weeks ago, he was on his way to the tip and thought he would call in to see if I wanted anything out of his car before it got dumped. Some good picture frames among other things. Three cushions which looked ok. They were a bit small and filled too fat with lumpy stuffing. I thought I would take them apart and could probably get six new cushions out of them. Not that I need any more cushions myself, but I have some spare fabric and I could make them for the church.
So here I am pulling apart the lumpy wadges of what looks like wool that's come straight off the sheep, and shredding it into a less dense stuffing. Six cushions are made out of old sheets, and six covers are waiting to be sewn up. It's like a cushion making factory in here. What a flippin boring job. I'm sure it will be worth it in the end, the parishioners will get something soft to sit on. 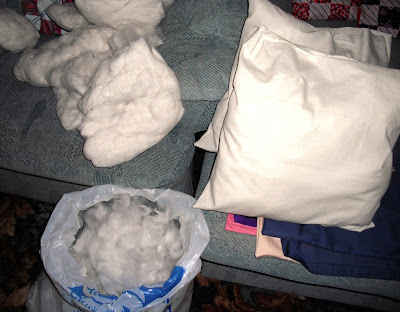 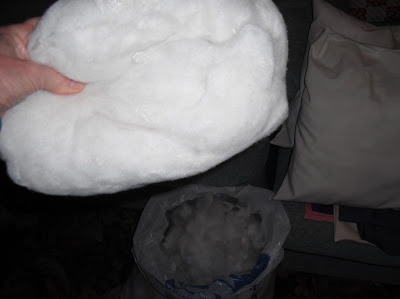 It's been blowing a hoolie all day here, the Humber Bridge is closed to high sided vehicles, as is the M62 bridge over the river further upstream. I walked Jade this morning, and checked on the Summer House while I had my boots on, before going back inside. I'm pleased to report that it's still standing, still solid, and the roof hasn't blown off. The water buckets are full so they are doing their job of catching the rainfall, trouble is they are too heavy to move, ha ha. A lot of the plants in the raised beds have survived so far, I put bulbs in a couple of months ago so it should be a good show for the spring and summer. Mind you it has forecast snow, so we'll see what happens after that. 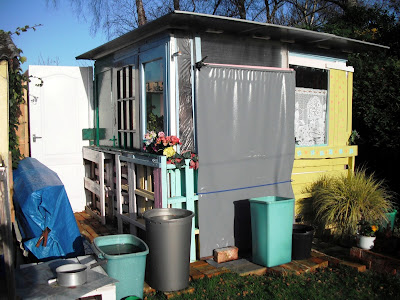 Time to make my dinner. I'll make a big pan of something or other with what I have got in, to last two or three days. It'll be chuck it in and see what happens. Can't be bothered to go shopping.

Thanks for popping in, we'll catch up soon.
Toodle pip
Posted by Meanqueen at 17:28

Email ThisBlogThis!Share to TwitterShare to FacebookShare to Pinterest
Labels: make do and mend, reuse, sewing