The exhibition at 20 21 Arts centre is very colourful, but I haven't the faintest idea what it's all about. It's called True to Size, and it's by Heather Phillipson. She mixes images, noises, objects, languages, and bodies. In 2016 it was at Plymouth Arts Centre, and here's what they said about it. I've read their whole report and still don't get it, so I give up.
Each installation in TRUE TO SIZE is dominated by an oversized, human scale, teddy bear, in a scenario composed of cardboard cut-out images and vibrant rainbow motifs, with video monitors attached to the teddy bears’ faces. Each short video combines a monologue with surreal and colourful collages of emoji imagery, subverting our notions of playfulness and innocence. Phillipson’s monologues explore aspects of contemporary life: ecology and climate change; self-mutilation and fitness / dieting – the body beautiful. Each aspect represents a crisis for the human body. The impact is then explored by layering sound, image and sculpture – with each installation bleeding into its neighbour. You catch fragments of a sentence, an image on a screen, but it is all fleeting. This is deliberate – nothing is allowed to settle, but instead meanings pile into each other. It is initially confusing and disorientating, but as the images and sounds begin to merge, they create a space where all possibilities are equally valid. 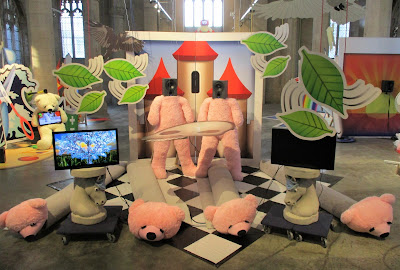 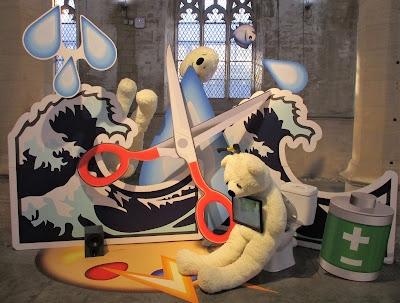 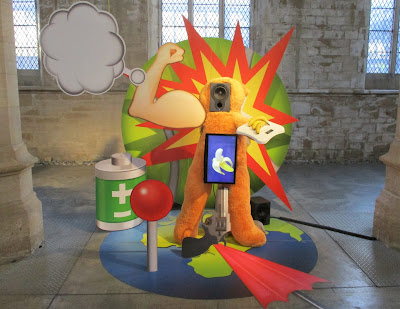 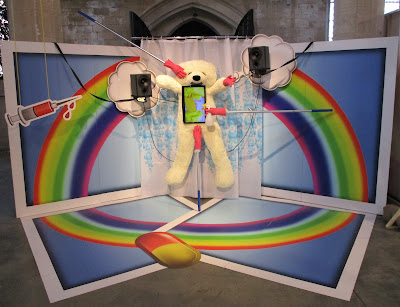 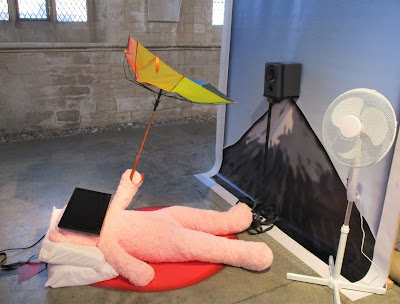 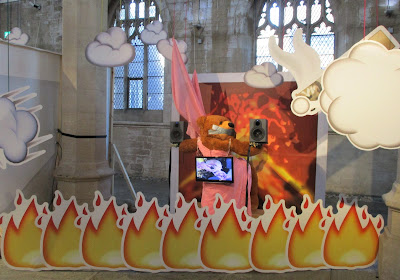 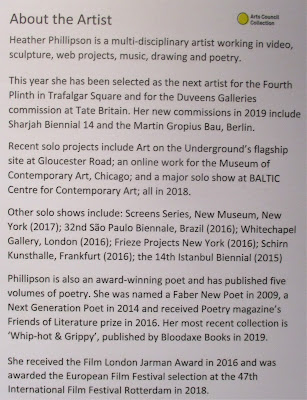 Not a lot more I can say about that. Perhaps you can see something that I have missed.

I was in town today to go to the Bank and Post Office, to pay a bill and car tax. Then I picked up some cat food from the market, and went to the new Aldi close to the motorway and next to Tesco. The store is much the same as the smaller one, just on a bigger scale. I was curious to see what it is like. I won't be going too often because the town one is handier for me.

I got a few yellow stickers from Tesco, but was too early for the final reductions. The shelves were stacked high with food going out of date, a few people later are going to get plenty of bargains.

While I was in 20 21 today I booked a place on a workshop. It's about Stitched Shibori, and the tutor is Carol-Ann Allan. Here is the blurb from her web site. Looks interesting.
Can't copy and paste, it's not working. details of the workshop is on her workshop page. ilona