After a hearty breakfast I spent far too much time talking, I am just a flippin gas bag. I had planned on getting away at 9am, but it was more like 9.45am. Never mind, I am on my hols. I went off down to the sea front and turned right, all I have to do now is to keep the sea on my left hand side. Going past a green area called The Bents, the promenade looked very pretty with all the flowers. I love the way they have painted blue wavy lines along the edge of the pavement. The south end of the promenade has already been reconstructed and is a very pleasant place to walk. 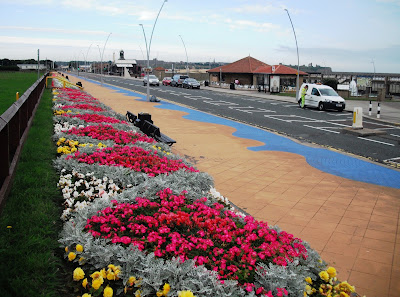 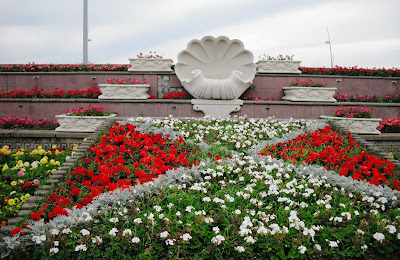 As the road turned to the right, I set off down the coastal path on the left. Now for a stretch of rugged coastline to enjoy. 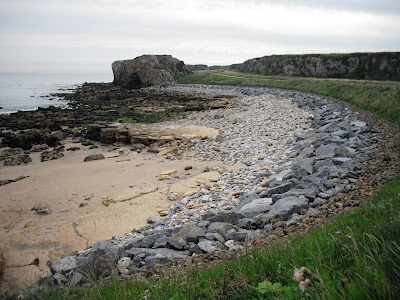 I looked back towards the pier at South Shields. 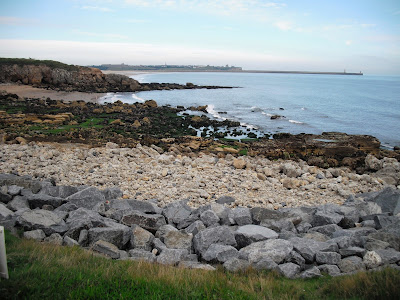 The big green grassy area is called The Leas and is owned by the National Trust. I could hear a rescue helicopter hovering behind me and stopped to watch for a while. It was there for ages. I remember seeing some people in the sea at that point, I thought they were on a training exercise. 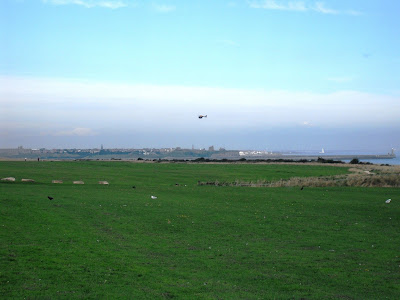 As I was passing a car park a police horse box pulled in and parked. I thought, ooh I wonder if they are going to get the horses out, so I asked the young lady driver. Her colleague was busy on the phone, checking they were in the right place, she said they may get them out in a few minutes as they are on a search mission.  I waited, and sure enough they lowered the back ramp down and out they came. Good photo opportunity I thought. 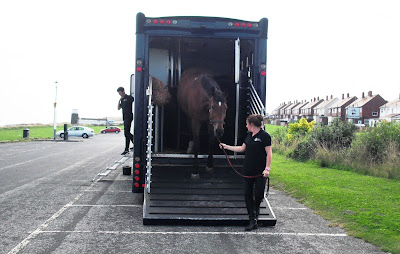 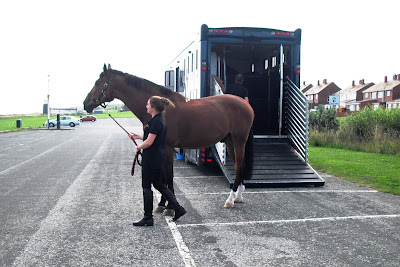 The young police woman was very friendly, and was happy to make conversation, I haven't found one grumpy person here yet. We talked about the skills of driving a moving load, and she said it was more difficult to drive the bigger truck which held six horses, this one only holds two. 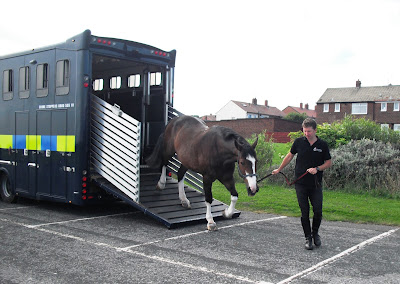 Wow, isn't he a handsome boy. 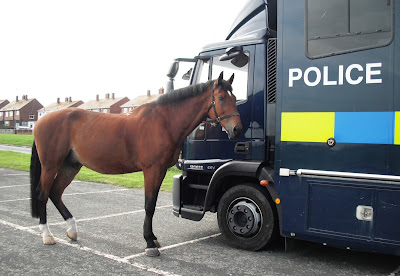 She offered to take the picture of me and the beast. On the local news tonight there was a report that they found a missing woman's body on the beach at Marsden Bay. How sad, that must have been what they were looking for. 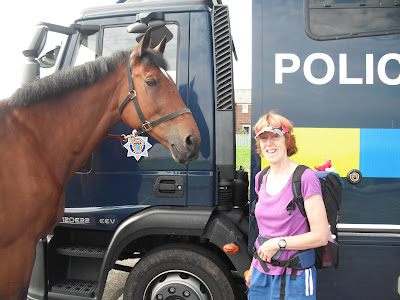 I carried on, the coastal path runs very close to the coast for a while. It reminds me very much of the south coast in Dorest and Cornwall. 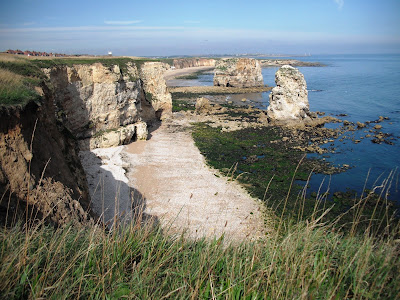 This is part of the quarry works near Lizard Point, don't know much about it. 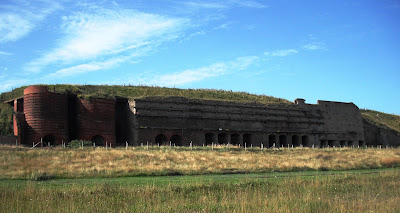 A few birds perched on this big rock, don't ask me what they are, I am not a twitcher, ha ha. 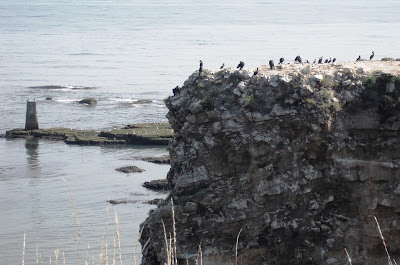 This is the Souter Lighthouse. 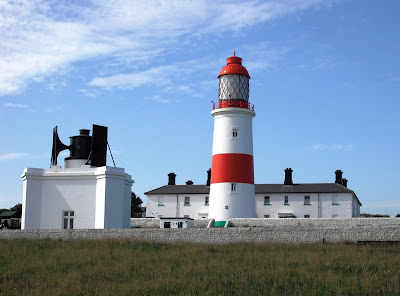 I saw this horse standing motionless on a hillock a long way away. I wondered if it was real, or a model. He was definately real, over the other side there was lots of horses grazing in a field. 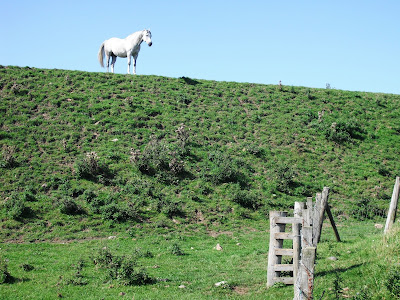 The path runs quite close to the road at  Whitburn Bay, and I was amazed to see a magnificent display of wild flowers. A whole field had them planted all around it's perimeter, it must have been half a mile long. Stunning display. 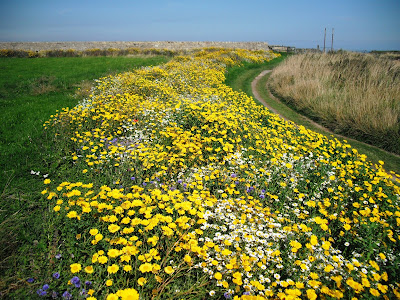 As I walked along the Promenade at Sunderland I admired the magnificent flower plamters. 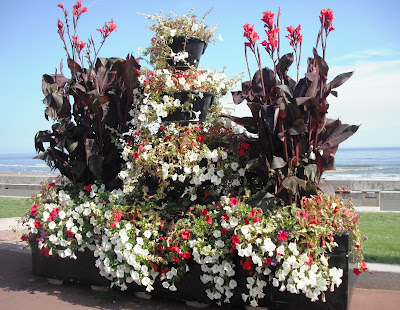 This is the Lighthouse at Parsons Rocks. 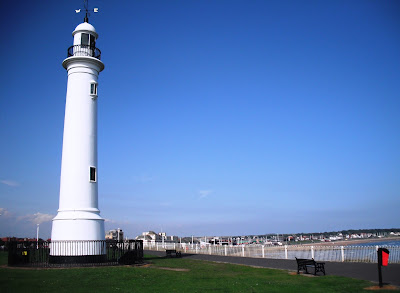 It says there is a Marina on the map, so I went and had a look at it. 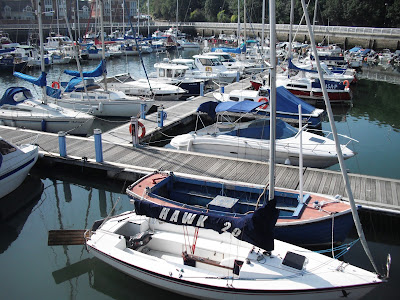 Then I came across a sign for the National Glass Centre. It's free to go in so I spent about half an hour in there. 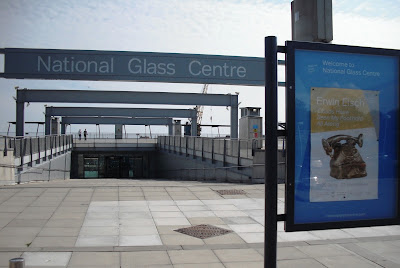 A couple of shots of the exhibition. 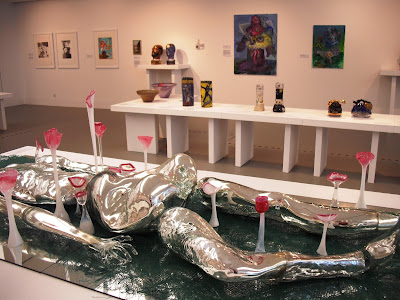 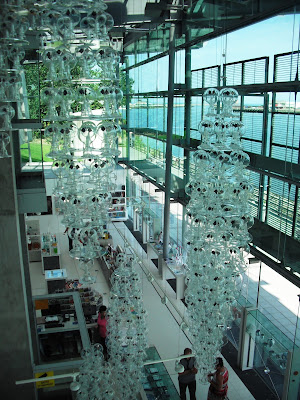 I needed to cross the river at the first bridge I came to, and here I am, the view from the Wearhead Bridge. The building with the flat roof on the left is the Glass Centre. 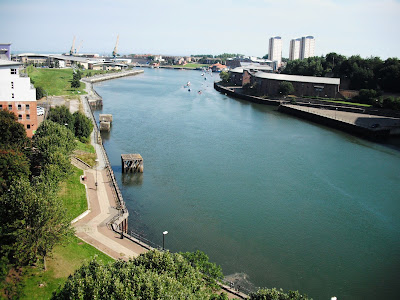 From Sunderland I could have picked up the coastal path again but I chose to walk along the road because I needed to pick up some supplies so I was looking for a shop. I found an Asda in Grangemouth and spent £5, this will be my tea for tonight. and some for tomorrow lunch as well.

I arrived in Seaham at just after 5pm.  This Iron monument is on the pavement. 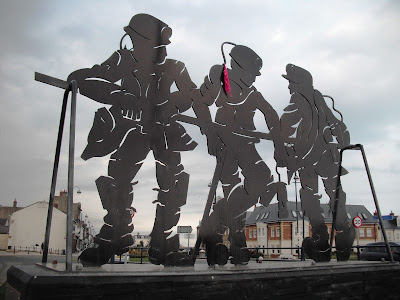 It wasn't worth going any further because there was no chance of finding a bed further on, so I started asking around where I should look. A very posh woman walking her dog pointed to a large seafront building and declared it must be good, it has five stars. I said I probably couldn't afford it, so she sent me in the opposite direction to an Italian Restaurant that had rooms upstairs. I couldn't afford that either at £85 with breakfast. I could have gone without breakfast for £75. I said no thanks and left. A young lady at a bus stop pointed me in the direction of a pub with rooms.

So here I am, it is cheap and cheerful for £35. No breakfast mind you. The owners only moved in a few weeks ago and the kitchen needs refurbishing so they can't use it. The whole place needs redecorating to be honest, it's a bit like transport and contractors digs. I took it because it seems there are very few establishments that do rooms in Seaham, which surprised me because I thought it was a seaside town.

Tomorrow I will have to find some breakfast, apparently there is a Weatherspoons not very far away which opens at 8am. Tomorrow I'm hoping to be past Hartlepool, but I don't think I will make it to Billingham. I will push ahead. I need to get my two small towels out and put them under my shoulder straps, they are starting to dig in a bit and make my boney shoulders sore. It has forecast rain, so that won't be very nice, but I will soldier on. Just have to walk faster and dodge the spots, ha ha.
Posted by Meanqueen at 21:49