Hello. This book has been a bit of an eye opener. I think we have all heard of the Drugs, Sex, and Rock and Roll thing which was rife in the music world of the early sixties. I was a very naive teenager then and all I did was scream at the bands when they came on the telly, not really understanding what went on behind the scenes. There was the odd news item about pop stars getting busted for drugs, but I was never sure what drugs did to people apart from making them appear to be drunk.
Eric Clapton goes into great detail about his drug and alcohol addiction in this book. He even says himself it's amazing that he is still alive. There were long periods of time where became a recluse, not leaving his house and living on junk food, chocolate, drugs and alcohol. When he reached rock bottom he went into rehab. 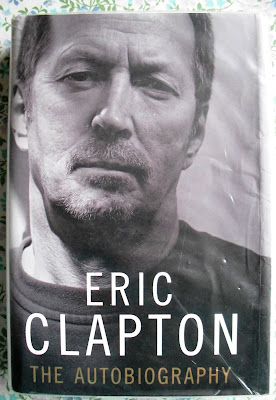 Such a shame that his whole life has been blighted with pushing the self destruct button. He is one of the best guitarists in the world, yet his personal life has been a shambles. He treated women abominably, which I was very saddened to read about.

There is a lot about the early days from when he started to take an interest in music, where he drew his influences from, lots about the bands he set up, the disagreements about the type of music they would play, and how he was drawn to go in a different direction which caused him to split and start again with another band.

This book would be an excellent read for anyone who is battling against a drug or alcohol addiction, he tells it how it was when he was at rock bottom. It's also a good read for anyone who was a teenager in the sixties, there are a lot of references to his friendships with other pop bands on the scene, the Stones and Beatles, and everyone else who was around at that time. It's common knowledge that he was in love with Patti Boyd, wife of George Harrison. I can remember seeing all this on the telly and thinking what an exciting life these pop stars lead. This book lifts the lid on the dark side of it all. Eric goes through a roller coaster of different emotions. Now at the age of 72 it appears he has finally got it together and has a family.

Thanks for popping in, enjoy your Sunday. We'll catch up soon.
Toodle pip.
Posted by Meanqueen at 22:41