The weather didn't look too promising this morning, a bit dull, but it brightened up and I was able to go and finish Helen's front garden. here are the before pics, it was very overgrown, not having been touched since last year when the previous owner passed away.
It is a three bedroomed semi, which needs re wiring, new kitchen, new bathroom, part re plastering, and decorating throughout. Helen is project manager and seeing to all of that. There is a big driveway to the front, parking for four cars, and a garage. 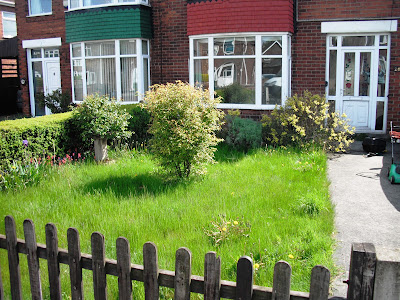 The grass was like a meadow, the bushes were woody and gangly with hardly any new growth from the bottom. and there was dandelions everywhere. 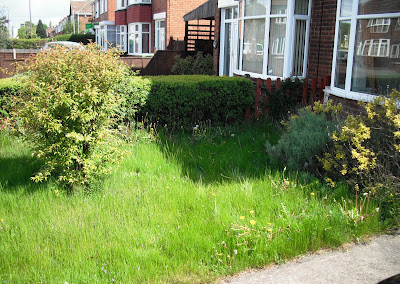 All neat and tidy now, though the grass looks a bit brown and dead, no matter, it will green up with a few days of rainfall. The rose bush on the left was covering the bird bath, so that had to go. The bush in the middle of the lawn was tidied up with a trim. 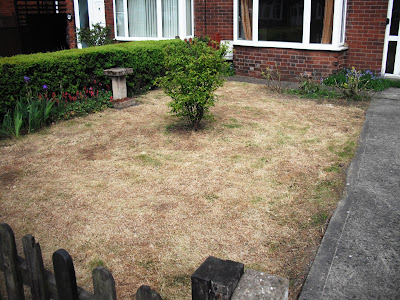 I severely cut back the three bushes in front of the window, They have some new shoots visible so they should start bushing out lower down, which will be better than the shaggy mop look they had before. I trimmed the edges of the lawn and cut them back where they had grown over the top of the concrete paths. 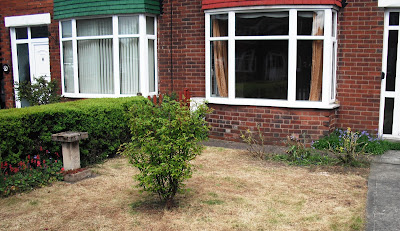 I find garden maintenance a chore, but I don't mind doing it when I can see the difference between the before and after. Next week I shall be starting on the back garden. That will be a bit more challenging as it's a complete jungle. There will be quite a lot of bags of rubbish coming out of it. Should be fun.
I thought I would post this pic of tonights dinner. Nothing out of the ordinary, steamed veg and two Quorn sausages. Most people would splatter dollops of Mayo on the food, but not me. I dip my fork into the jar, scoop a bit out, then stab the veg and eat it. Saves getting the plate all messy, it's virtually clean when I have finished, easier to wash up. Could even just rinse it. By the way, I don't normally buy Hellmans Mayo, it's quite expensive, but it's on offer at the moment in Tesco at 99p, so nice for a treat. 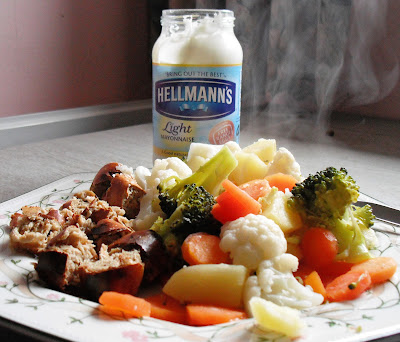 I have one address to send out a shopping bag, I'm waiting for the other two winners to let me know where they live. I've sent Elaine and Jes an email, so as soon as they reply, I will get them all sent off. I noticed that some are having difficulty sending me an email using the address on the side bar. Sorry if anyone is confused, I did it like that to stop getting bombarded with spam emails. I've spaced it out so it might make more sense now, but you need to close the gaps if you use it. And you must replace dot and at with . and @ Good luck.
Toodle pip.