I thought I would test out my new Ramblers Membership and meet up with a few fellow ramblers on a walk today. I received two booklets in the post, the Spring Newsletter from the Lincolnshire Ramblers, and the Group Programmes from the eleven groups in the region. I picked out a few possible walks which I might be able to fit into my busy calendar. Today there was one organised by the Gainsborough group, with the meeting place only 3 miles from where I live. A good one to start with I thought.
I packed my day rucksack, sandwiches, juice drink, umbrella, spare clothes in case it got chilly, and map. I like a map even though someone else is leading the walk. I arrived at the start place in plenty of time, no sign of a group of people. I found two ladies putting their walking boots on at the back of their car. Another lady turned up who had parked down the road. We introduced ourselves, and found that none of us were from the Gainsborough group, we were all from the Scunthorpe group. We had come along because the report from Gainsborough was that they were getting low on numbers because people weren't turning up. Ha, hardly surprising if the leaders don't turn up. So who was going to lead the walk then?
I had my booklet with me so I gave the organiser a ring to ask if anyone was going to turn up because we were waiting. There was an apology with an explanation that someone else had been given the job of leading it. I rang the number given to check with that person, and got another apology and some excuse that I couldn't quite hear. There was no one coming, so we decided not to hang about and make our own walk. I had the map so off we went.
Along the edge of a field high up above the River Trent, which joins the River Ouse, and meets with the River Humber. It was a glorious day. 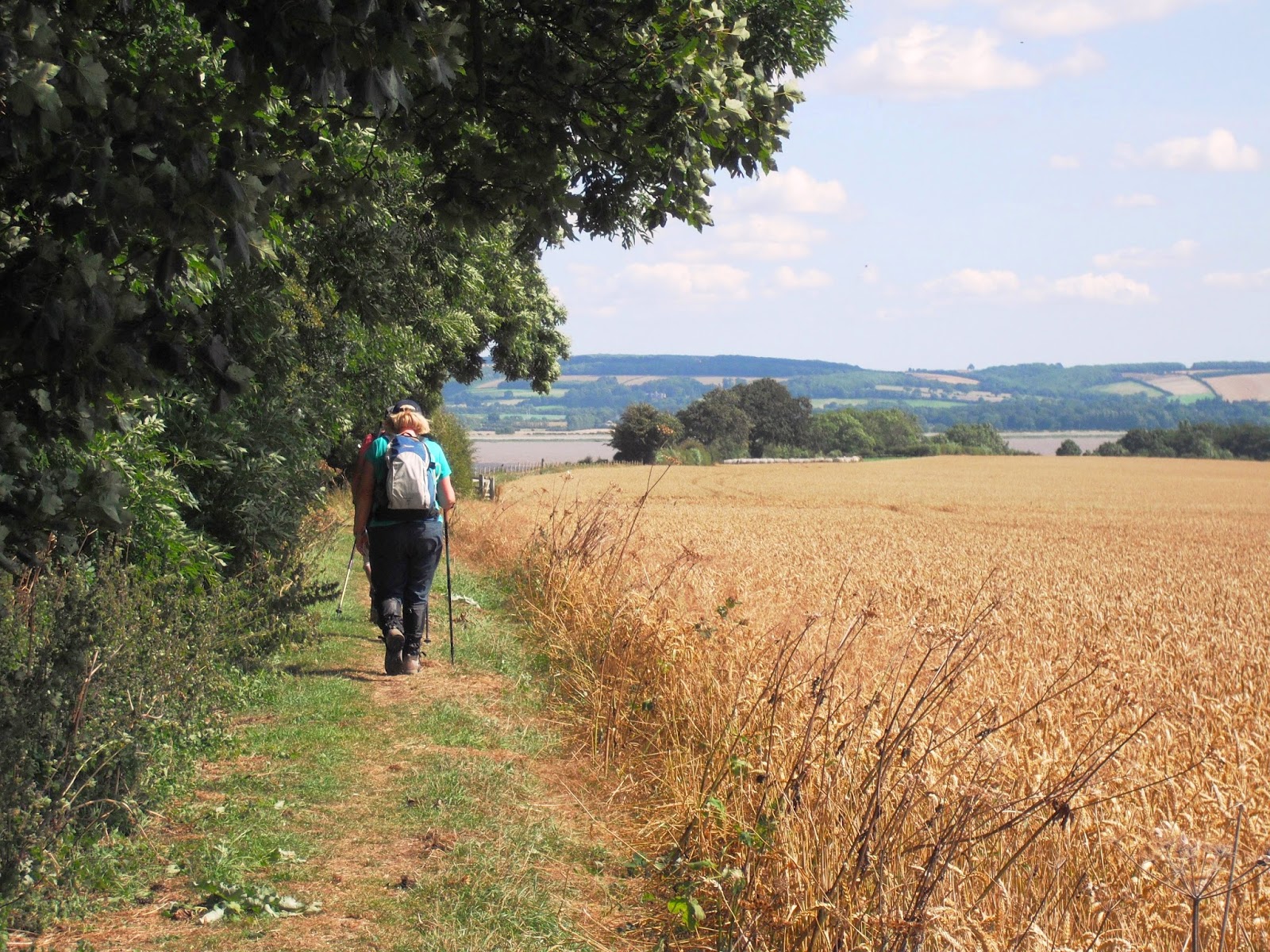 Through a gate on the left into a field with a steep slope to it. 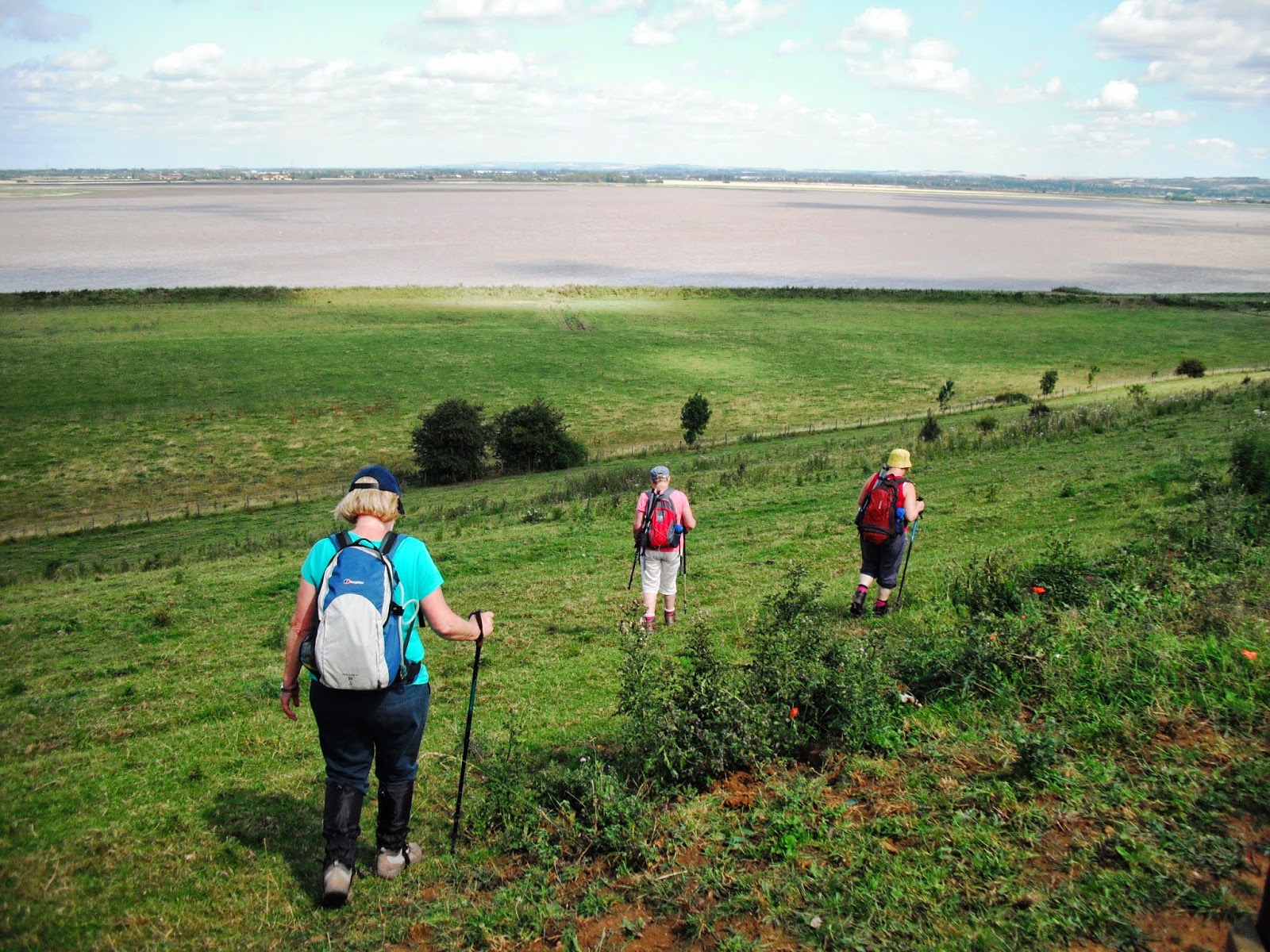 There were lots of cornfields, some already harvested, some were about ready for the combine to turn up. 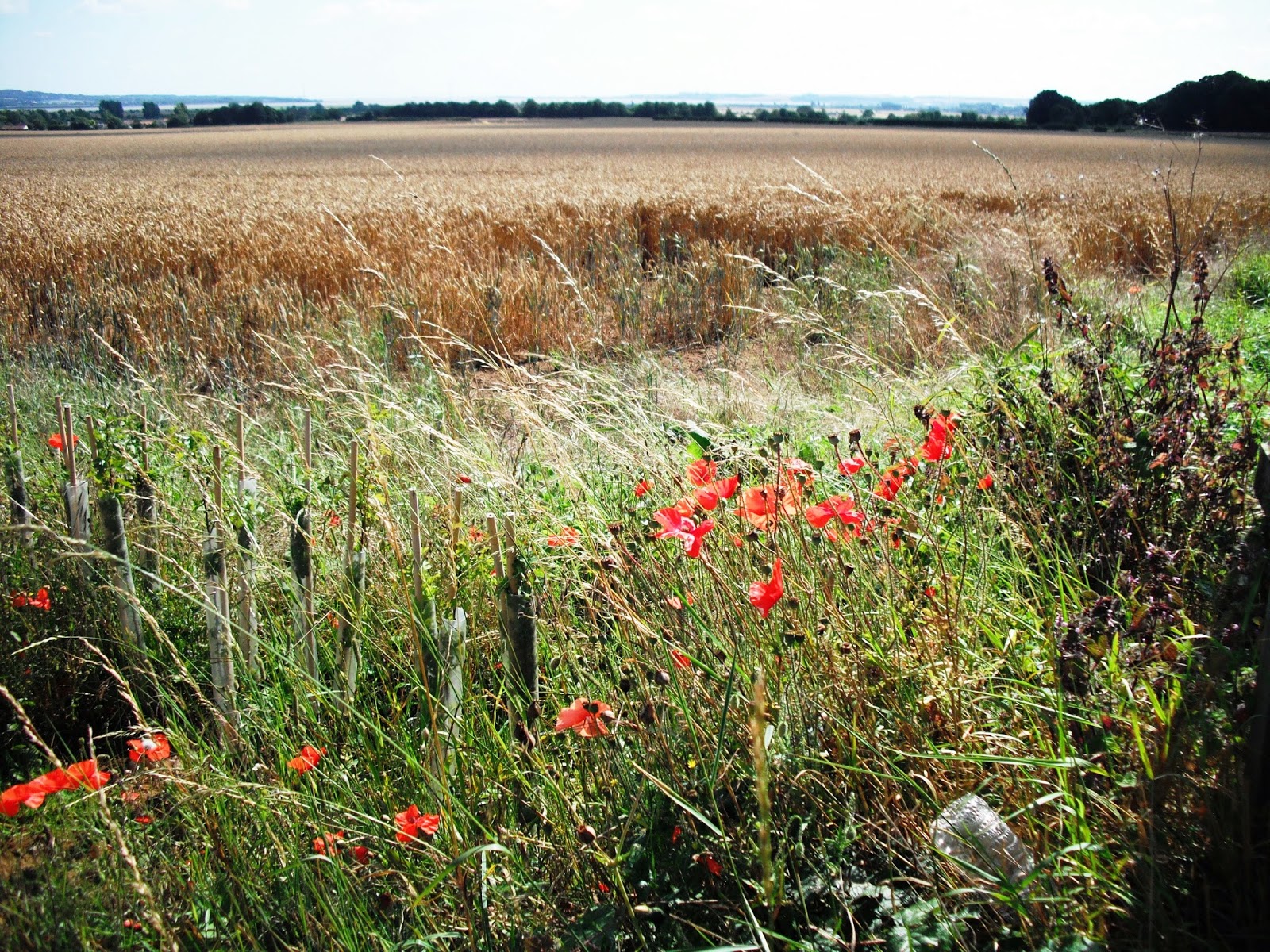 We came into the next village. This is the Village Hall, it's a small old building and is getting a new extension on it. One of the ladies said it has been like this for about a year, so they aren't making much progress. The new extension is being constructed of red bricks, totally different to the rest of it. It's not going to look very good, that's if they ever get it finished. 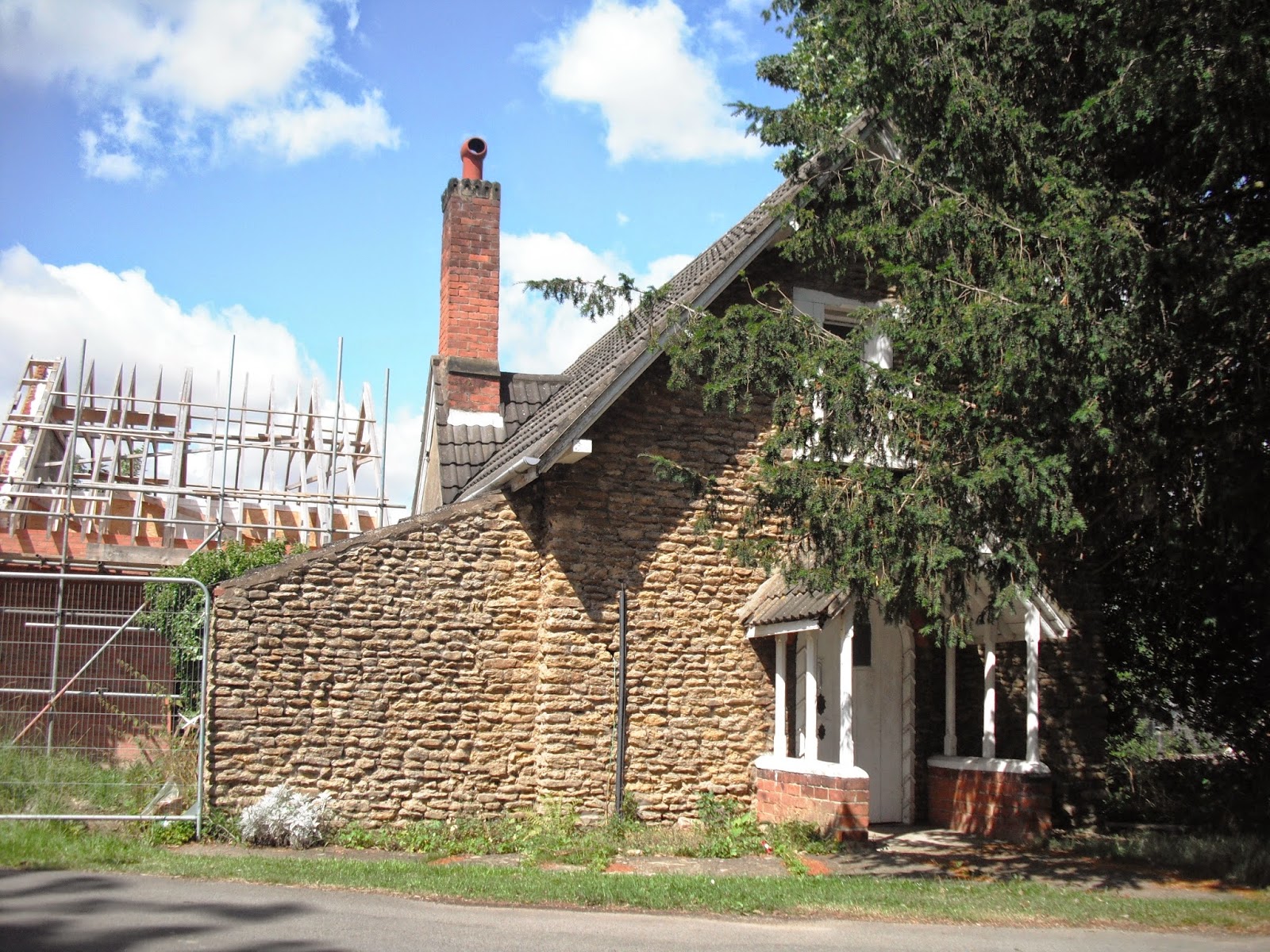 Don't you think this is just cute, a small stone Scania truck and trailer with a few plants in the back of it. Seen in the front garden of a house. 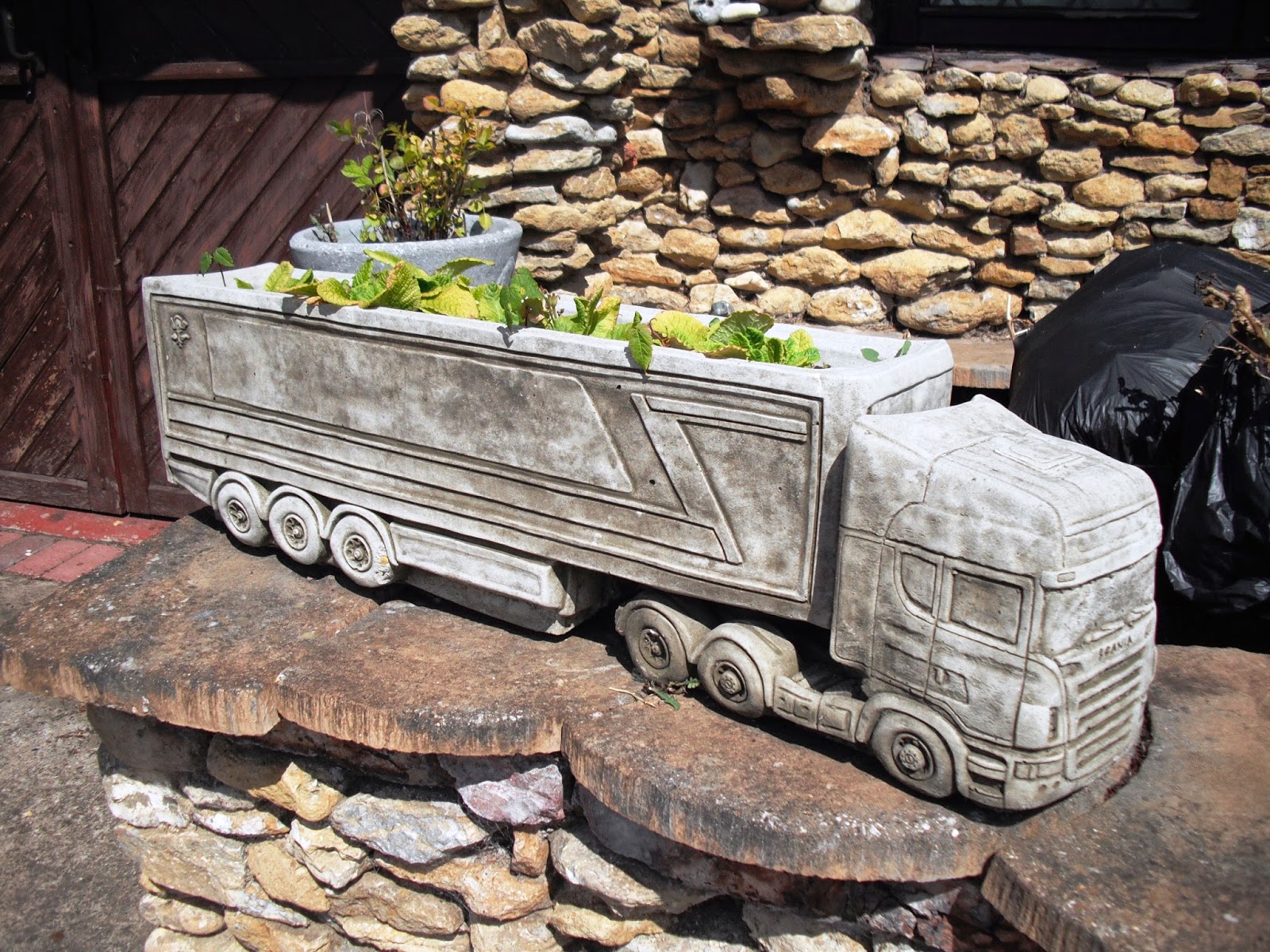 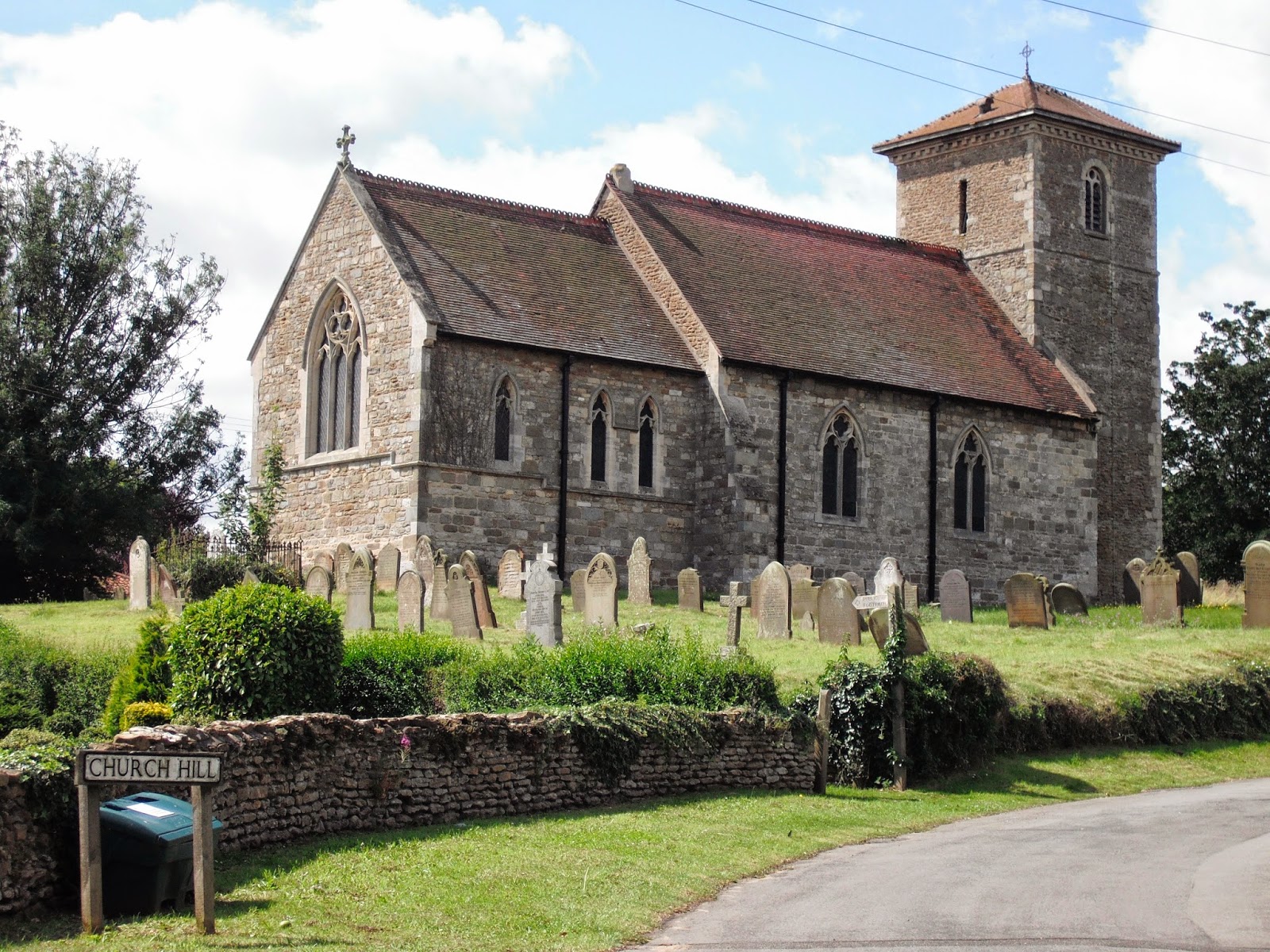 Now we are on the Humber Bank, time for lunch. 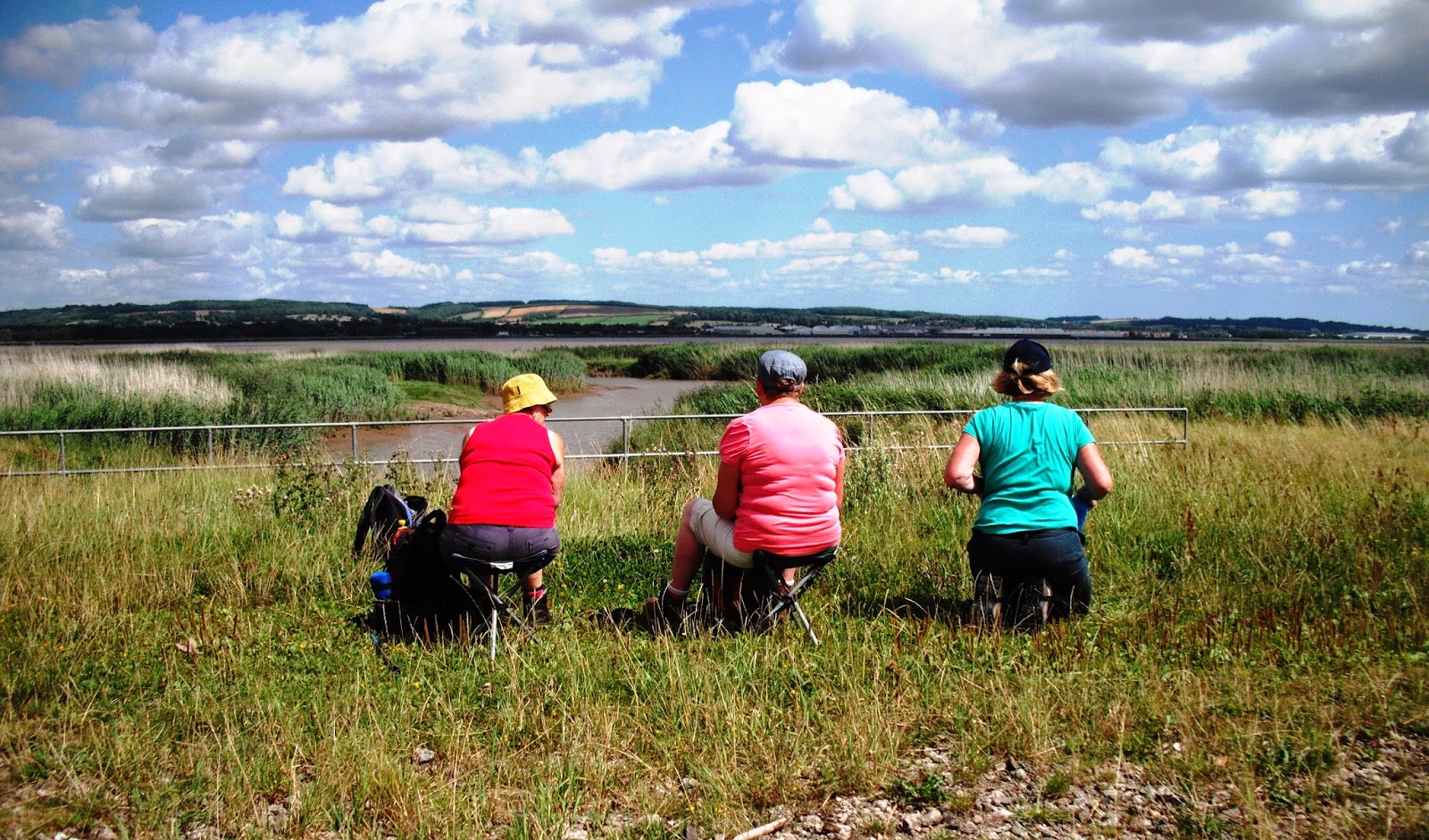 Nearby, a farmer feeding a flock of seagulls. These modern tractors don't look like tractors as we know them. This is more like a track laying vehicle that you would expect to see on a building site. 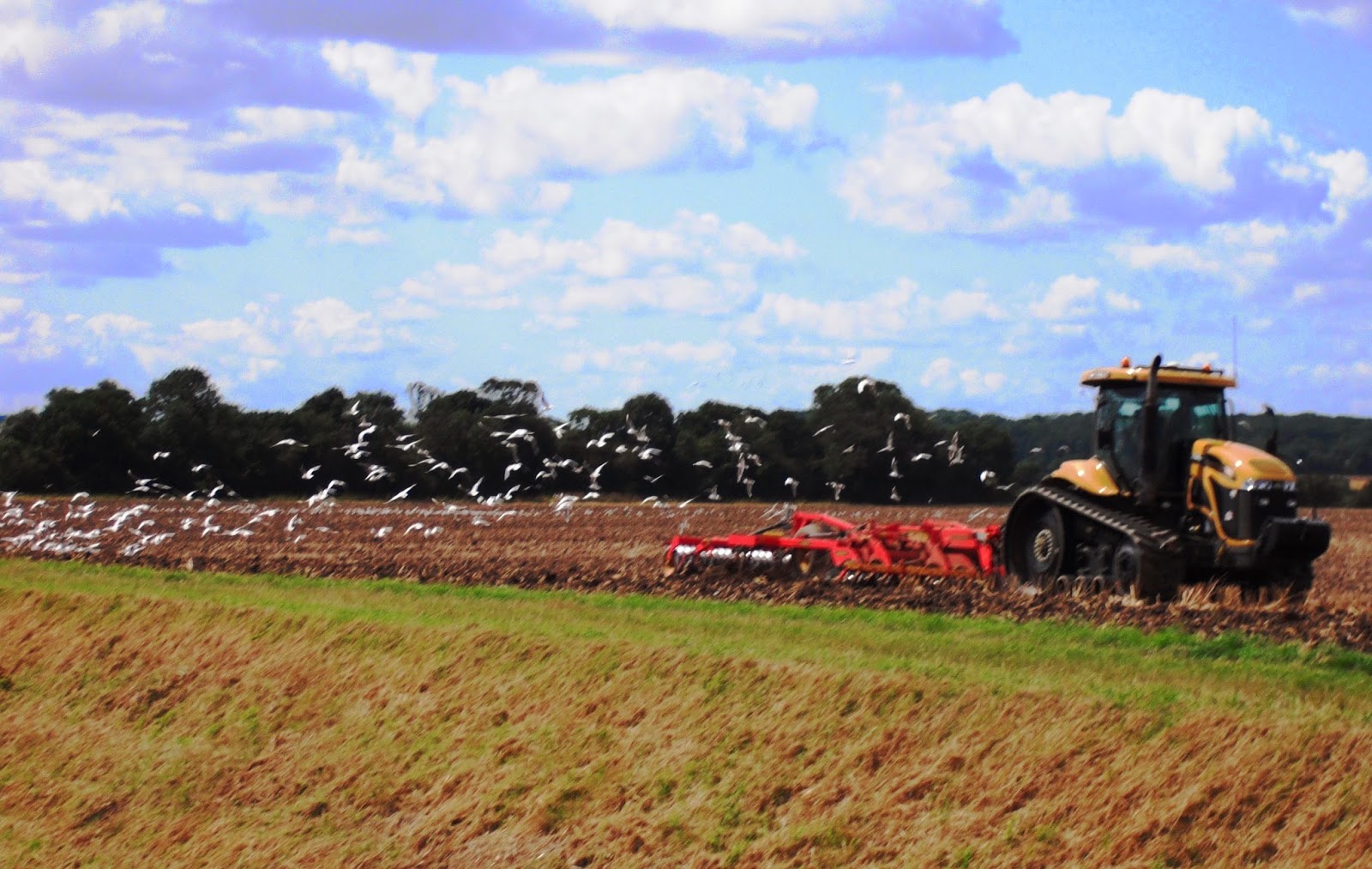 We are on our way back now, with the river on our right. Lovely views across there, and so clear we can see right over Yorkshire. 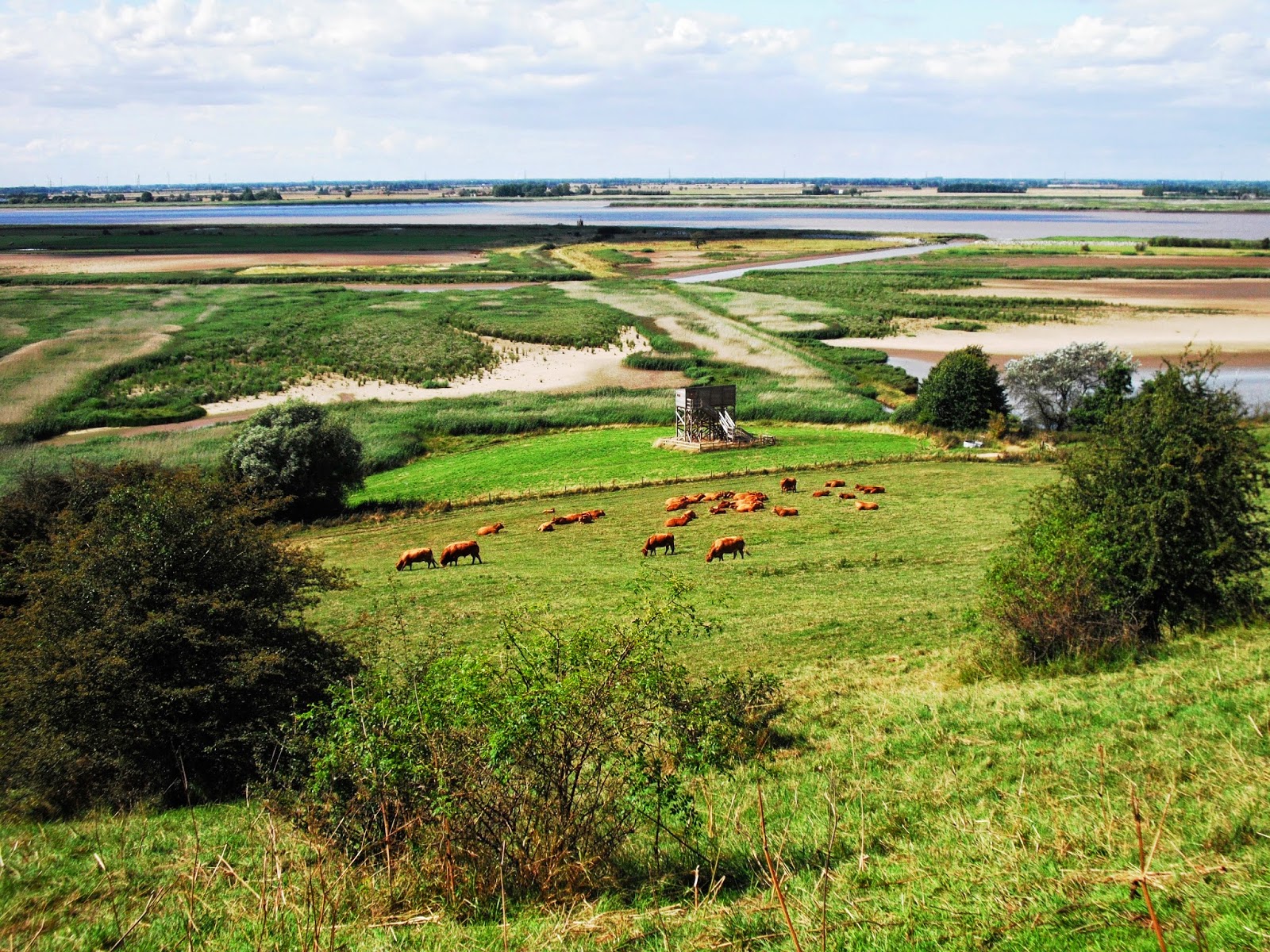 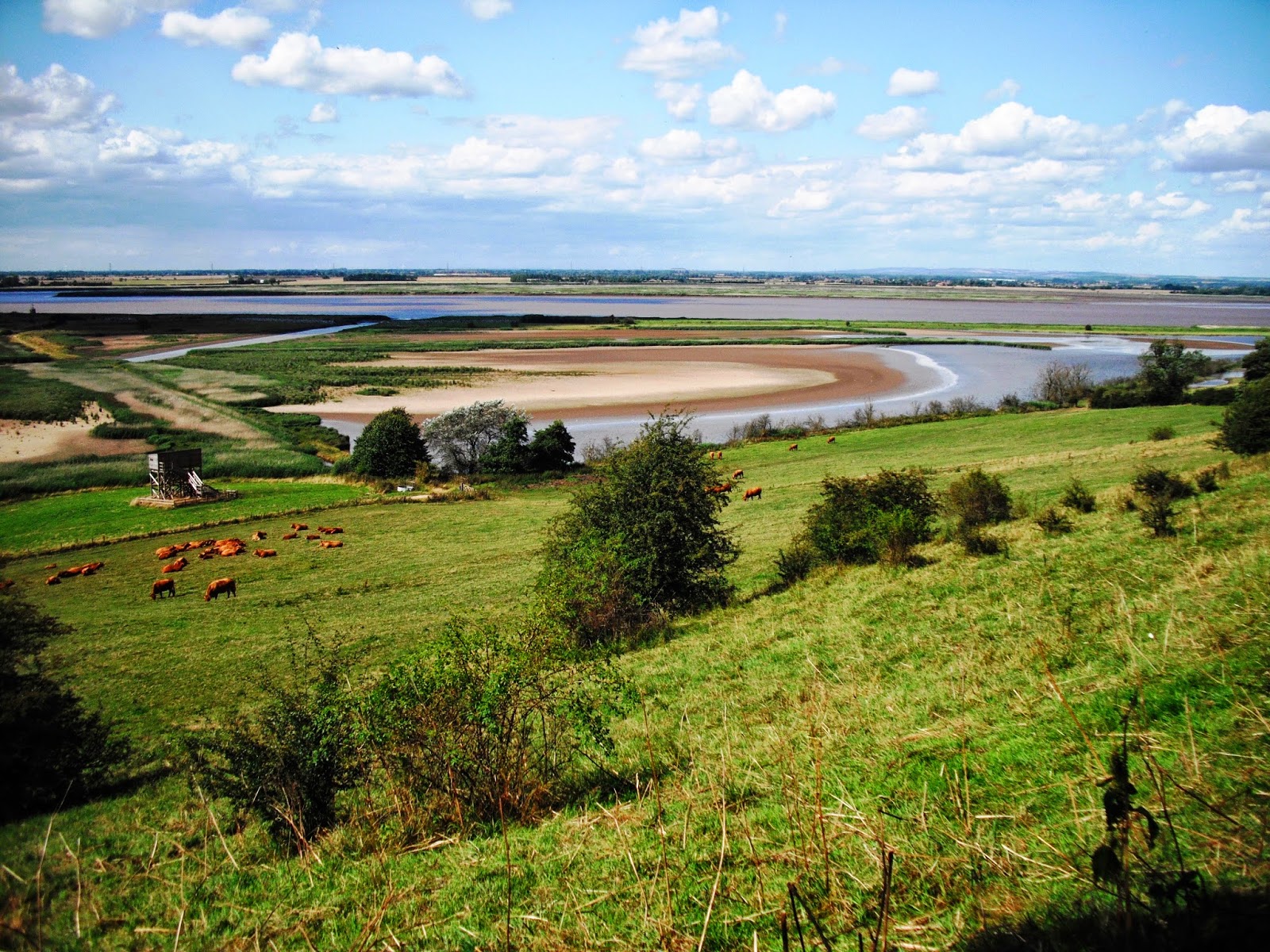 So tranquil, and warm in the sunshine. 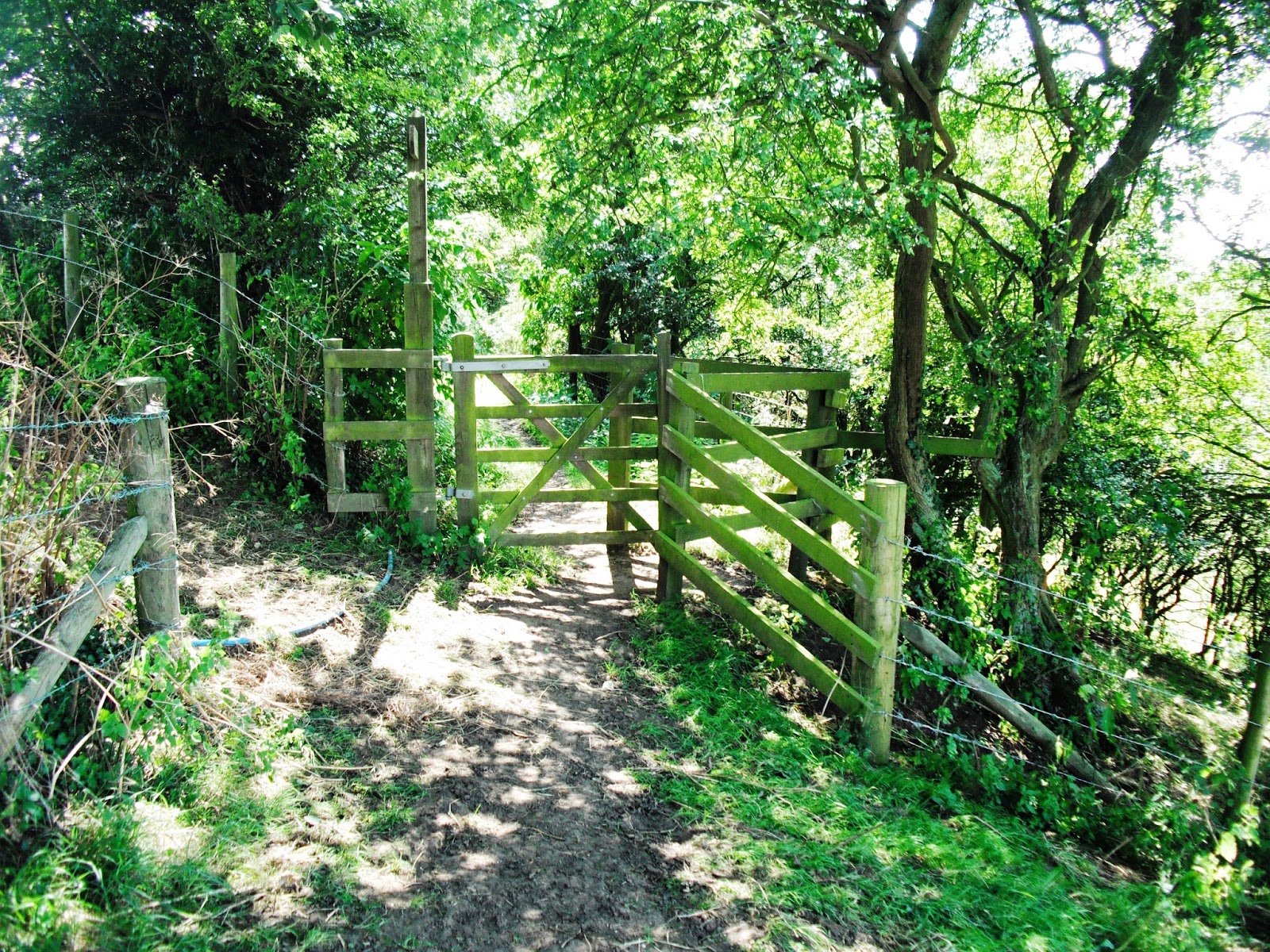 I left my new friends at 3.30pm. It was a lovely day, we had a natter, we had a laugh, and with just the four of us we had a darn good time. I think we might form our own little group and do it again. I've checked the mileage, we did 7.25 miles.
Thanks for popping in. Toodle pip.
Posted by Meanqueen at 19:41