Hello. We've had a couple of downpours today, not as much as those down south though. I was outside painting the garage doors, and had to hurriedly retreat indoors as the heavens opened. The job might get finished in a few days, I have a short attention span so I am doing it a bit at a time. Pity I haven't got enough of the same colour paint to do the whole lot, never mind, no one else will have doors like mine.
The car was loaded up this morning, cat litter is flippin heavy, my poor springs. The Focus Estate is a good workhorse. A local cat litter factory has a clear out every so often and offers the cat rescues round here the old stock which they can't sell for one reason or another. Some of it is contaminated, a mixture of two or more different varieties, this happens when the packing machines change over from one to the other. Some of it is old stock which the customer no longer requires. Before they dump it in landfill they tell us to come and collect what we want. The men this morning were very helpful, getting it out with the forklift truck and helping us load it into the cars. It's good of them to offer it to the rescues first before it gets chucked, saves us a lot of money. 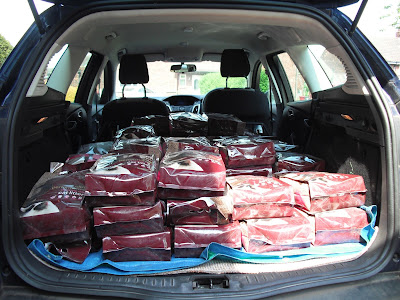 I went to town this afternoon, needed to stock up on nuts and seeds for my breakfast cereals. Aldi for the nuts, Holland and Barrett for the seeds. While I was there I had a look at the new exhibition in the Arts Centre. Some amazing Lego models, I'll post some pictures soon.

I have decided to get rid of my motorcycle gear, I'm never going to ride a bike again so not much point in hanging on to them. I have a leather jacket and trousers, boots, helmet, and full waterproof suit. There's a couple of bike shops and a training centre on the way to town that might be able to make use of them, but they were closed today so I'll have to go back another time.

I am beginning to feel a bit out of touch with the pop world, it's all moved on since I was a teenager screaming at the Beatles. There is a big outdoor Radio1 pop concert on over the border in Yorkshire this weekend, and I've never heard of any of the performers. I hadn't heard of Ariana until this week. I have no idea who these up and coming young stars are.

Soon the pop festivals start, and I have to admit I have never been to one. The only festival I have been to is a truck festival. I can't see the point in being trapped in a crowd peering at some dots leaping about on a stage. You can look at the big screen but you might as well watch it at home in the comfort of your arm chair. Nope, I don't fancy that at all. Years ago I did see The Rolling Stones at Stafford, I was lucky enough to be at the front, and The Kinks and The Honeycombs at our local  dance hall, quite a small venue. Years later I saw Meatloaf at the NEC and Cher at Sheffield. That's about it, never been to a pop festival.

The sky looks very angry, looks like another storm is brewing. The cats are in and I am going to watch something on yooootoooob, so I'll sign off. Thanks for popping in, we'll catch up soon.
Toodle pip