Another successful shopping trip last night. It was three weeks ago when I last went. I am getting the hang of this now, get everything I need in one big shop. No going here there and everywhere, picking up a few items at each place. I'm afraid there are some shops which have lost my custom.

My £60 spend might seem a lot for one person, but there is cat food in there. My cats don't like Aldi's own food but they have offers of other makes,  Whiskas and Sheba, so I get these when they are in stock.

You will see that I went through the checkout at 20.56, four minutes before they close. When I arrived there was no one in the shop, then two or three people arrived. We all spaced ourselves out. Some didn't buy very much and were soon gone. I held back and was the last one to leave. 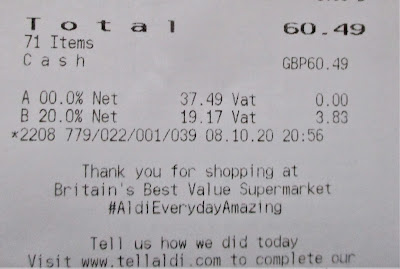 It's nice to come down in the morning and see a full fridge. Making the sweet treats last two weeks or more by cutting things in half worked well last time. A four pack of muffins lasts eight days. I had half of one last night with a drink. I have bought a six pack of cheese and onion crisps this time. Crisps are my downfall. I could scoff the lot in one sitting, so this is going to be a hard test to make them last.

I am trying to limit my cheese intake because that can run away with me. I do like the West Country Vintage Cheddar, it's so moreish. I will move it into the treat category to make it last.

I bought a fourpack of pear cider, but didn't need to. I have enough now to last until Christmas. I have noticed how much alcohol dehydrates me, gives me a fuzzy head, so I will be drinking a lot less of it from now on. Maybe one can every ten days or so. It's moved into the treat category, along with a cheap bottle of chardonnay. It's nice but I don't really need it.

Now for breakfast. I will have spaghetti on toast, I have a half tin I opened yesterday to have with a microwaved spud. I will put an egg on it as well.

Going shopping once every three weeks can be a bit of a challenge. It is very tempting to pop back to the shops when supplies are low on the third week, open the fridge door and there isn't a lot left. That's the time to use the tins and packets and dip into the freezer.

Not sure what I am going to do with the rest of the day, we'll see how the weather pans out. Thanks for popping in. Toodle pip.  ilona