Hiya, yes I do find time to read occasionally, not very often though. I've never been what you might call an avid reader, I can take them or leave them. As  a child I read The Famous Five, and The Secret Seven, after that I moved onto magazines. Jackie was my favourite. I remember a relative buying me Nicholas Nickleby, for Christmas once, I never did read it.
Today I own hardly any books, I have given them all away. Except a few travel books, and I think I might have a cookbook somewhere. I think it's really strange that some people have hundreds of books all neatly lined up on bookshelves. I wonder if they ever read them more than once. These days the library is where I keep my books. If I want to keep them for longer than the allotted time I just renew them.
My choice of reading is autobiographies, and non fiction.  I can't get into fiction, I can't bring myself to read stories that are made up. Strange really when I prefer modern and contemporary art, which is mostly the figment of someone's imagination. The mobile library has a very small non fiction section, so sometimes I am struggling to find something to read. I often take the same book out several times if it is a particularly interesting book.
The Jeremy Kyle show on the tele may not be everyone's cup of tea, it definitely isn't mine. I have caught bits of  it on occasions, usually when I have been at someone's house and they have had it on. The whole thing makes me cringe. I probably think the same as everyone else, how can people go on there and tell the whole wide world what is wrong with their dysfunctional family. Shouting and swearing are the norm, as is throwing the odd punch now and then, though this behaviour is quickly defused. Fancy having big and burly security guards on duty in case it gets out of hand. Shocking really.
Anyway, curiosity got the better of me when I spotted this book, I wondered whether it would give an insight as to what goes on behind the scenes. It does, Jeremy Kyle writes exactly how he speaks, direct and to the point. He has a bit of a colourful past himself, and draws on his own experiences to dish out advice. He is an agony uncle with balls, and tells it like it is. No pussyfooting around, he gives it to his guests straight and shoots from the hip. This style may not be to everyone's liking, but for me, I like a bit of common sense, and he has got plenty. 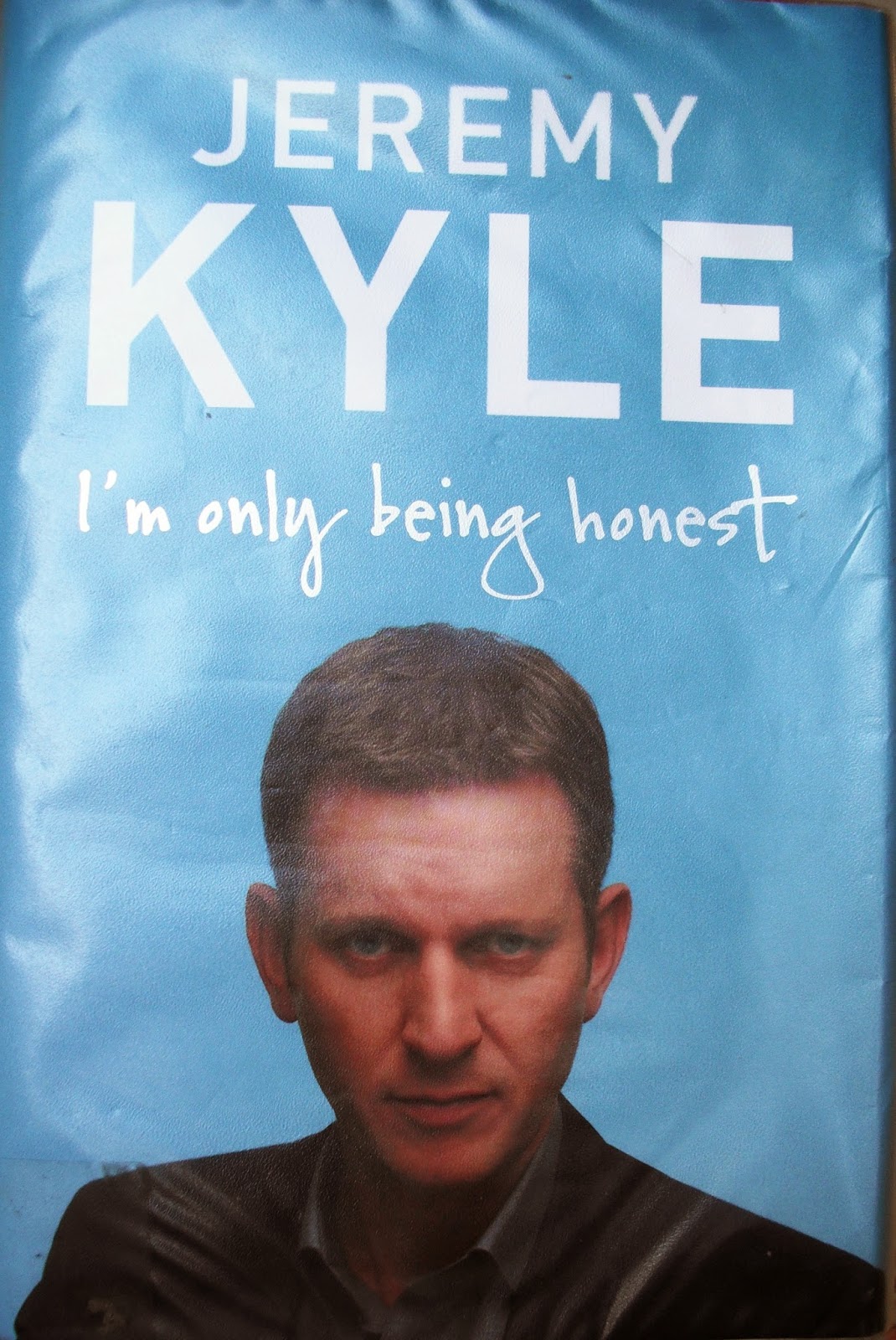 He had a happy upbringing in a loving supportive family, and admits to being a recovering gambling addict. His daily struggles with OCD still affect him, and he has been twice married, he has four children.

In this book he takes a hard look at the social problems blighting modern Britain, and looks for solutions to repair what is damaged. He maps out an agenda for change, insisting that personal responsibility and a strong government is the key to the way forward.

His show is on the tv every weekday morning, and contrary to popular belief people are not cajoled into appearing on it, they are queuing to get in. Everyone appearing who wants to sort their lives out are offered support through relationship counselling, addiction counselling and detox. Sometimes the investment of months of work follow an appearance on the show for some of the guests.

Jeremy Kyle, although he has a direct and confrontational approach towards his guests, comes across as someone who genuinely cares in this book. Yes, he is a showman, but he has some good old fashioned down to earth common sense solutions to today's problems. I would suggest that some of the out of touch politicians who live in their ivory towers should read it. Jeremy Kyle for President I say. I enjoyed the book.
Toodle pip.
Posted by Meanqueen at 22:19