Walking day 3. Sheringham back to Wells

Goodee Morning. Still catching up on last weeks hols. Wednesday morning at Sheringham, turn around and walk back to Wells. I haven't seen much of the town, so here is the board outside the railway station. It was starting to get busy as I strolled into town for a quick look before I set off. I did consider taking the train, the toot toot of the whistle was drawing me in. Sadly the steam train had gone, I missed it. 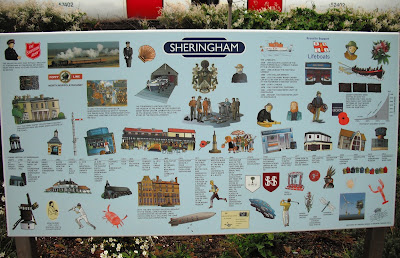 A few pics of the station before I set off. 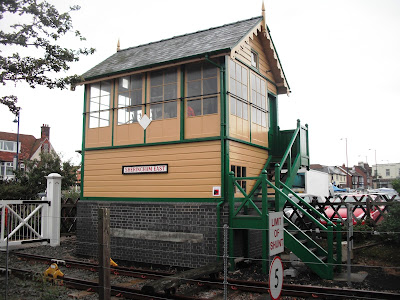 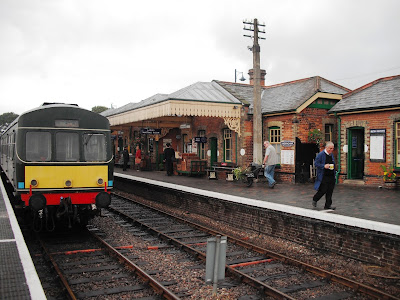 I love these preserved old stations, they have real character. 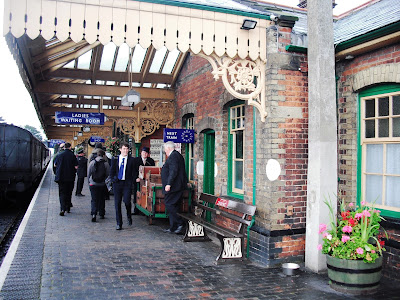 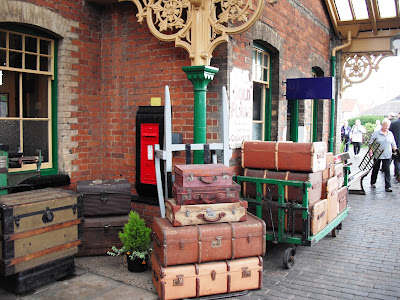 I knew it was going to be difficult to find some interesting paths back to Wells, I decided not to backtrack along the coastal path, been there, seen it. A little bit of roadwork took me to Upper Sheringham. 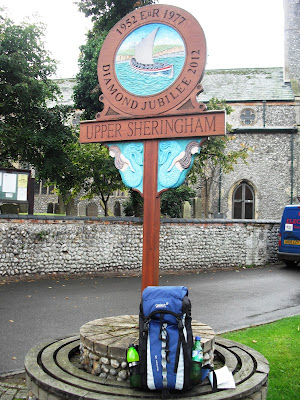 There is a reservoir outside the church, where the water flows continuously fed by an underground spring. Many years ago before pipelines were laid this was the only source of water to the village. 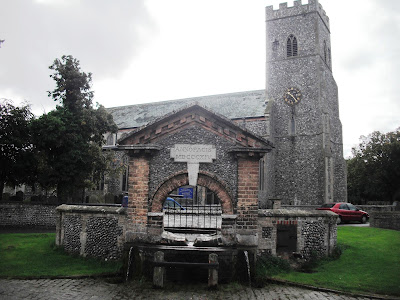 I joined the A148 for a short distance and took a right turn into the entrance of a caravan park. Once past the caravans, the path skirts around the edge of a wood and joins the road at Weybourne Station. Oh bugger, I heard the toot toot of the steam train but just missed getting a picture, it had gone. I wondered when it would come back. 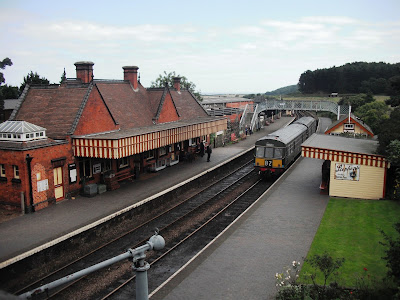 The path follows the railway line for a while, a very pleasant walk past Kelling Heath Park Station, which is nothing more than a platform and a couple of wooden benches. It winds it's way up an embankment, and rejoins the railway line a bit further along, then crosses it to the other side. I waited a few minutes in the hope that the steam train would come back, but no luck.
Another study of the map and a couple of miles on the road brought me to a junction where I again searched for a footpath to take me in a westerly direction. Not looking good, more road walking. I made a decision. The signpost said Holt 2 miles, a van driver stopped and asked me if I was lost. I said nope, I know exactly where I am. I decided to give my feet the rest of the day off, by walking the two miles to Holt and getting a bus.
A few photos of Holt, slow bimbling is less painful on the plates of meat (feet). This is an unusual church. 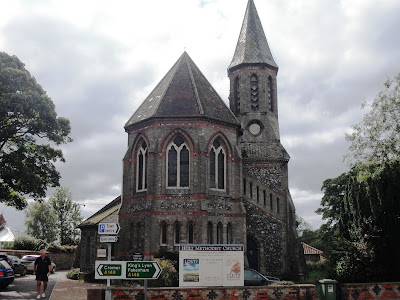 There is a monument in the centre with the distances to other towns on all four sides. I didn't take four pictures. You can see it says Wells 12 miles. Do I want to walk that far today on the road? Errr no. 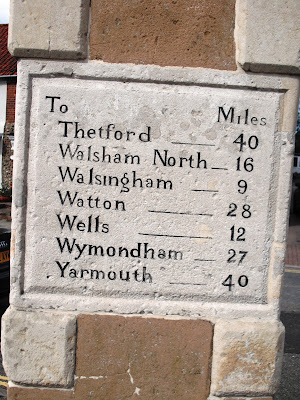 These terraced houses look neat and tidy. I would be inclined to paint my front door red if I lived there, but no doubt it wouldn't be allowed, ha ha. 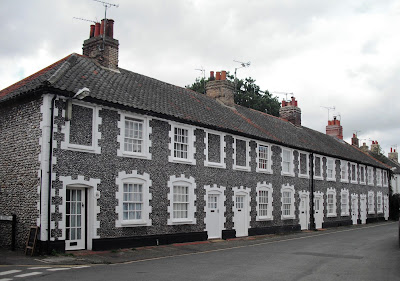 A plaque seen on the front of a shop. There are lots of arts and crafts type gift shops in this town. 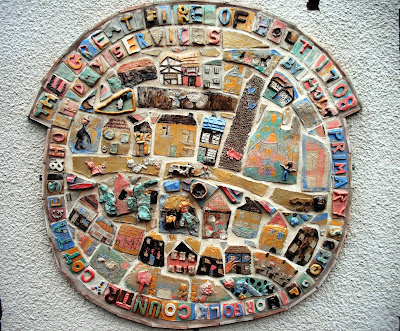 The gallery sits in a prominent position in a courtyard. A quick shuffle round revealed a lot of expensive paintings. 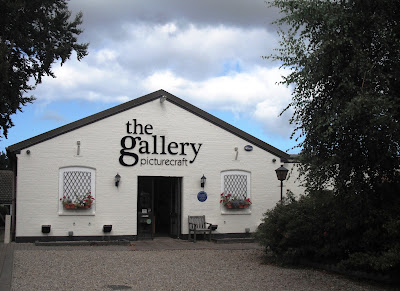 The man in the Tourist Information shop was helpful with bus time tables. There are very few buses to Wells from Holt, and the best option would be to get a bus to Sheringham, then get the Coast Hopper bus to Wells. I got comfy on the top deck front seat with good views, back to Sheringham.

I had an hour to spare at Sheringham, and as luck would have it I spotted the steam engine being shunted into a siding at the station. Wow, at last I can get a picture of it. Isn't it a beauty. Love love love these trains. I got chatting with a railway man and he told me it was going to be loaded onto a truck that night, and carted off to another station. Apparently that's what they do. The engines are on loan and get moved about to different places. He also said the road journeys don't do them any good, they get bashed by overhead trees and end up damaged. Sounds like restoration is an ongoing task. 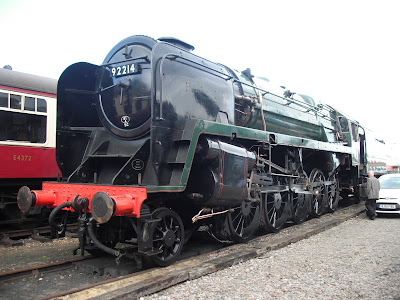 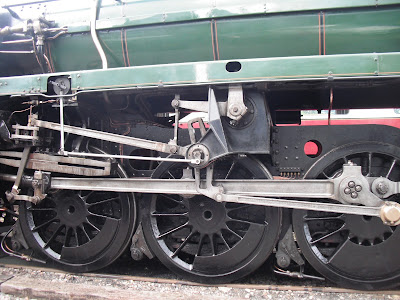 A stroll down the main street in Sheringham took me past this shelter on the way to the sea front. It has been clad in wooden panels and painted in celebration of 100 years Women's Institute. 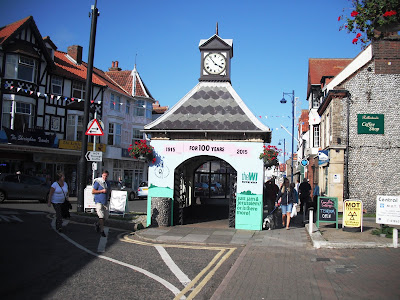 Then it was back to the station for the Coast Hopper bus to Wells. I was lucky, there was one in ready to go. Not so lucky though when I saw it was crammed full of people, the driver said I could get on. It was an uncomfortable journey, standing up and squashed against lots of bodies the whole time, people pushing and shoving to get on and off. Some people got left behind at the bus stops, after a head count the driver had to close the doors, sorry, no more. It wasn't his fault, apparently one of the buses had broken down and a replacement was on it's way.

The usual greeting from the Warden back at Wells Hostel. She was there as a relief warden, had come up from the south coast in her campervan with her border collie. A beautiful dog. She sleeps in the wardens flat, the dog sleeps in the campervan. A group of older cyclists checked in just after me, so it was frivolity and fun in the dining room that night. They were a jolly bunch.

So, only eight miles walked today, I am determined I will walk the whole distance tomorrow back to Hunstanton, even if it does mean lots of road walking. The snoring in the room kept me awake a bit, but eventually I dropped off. Lucky I can take my hearing aid out to muffle the sound. My goodness, I could never live with anyone who snores, ha ha.

TBC tomorrow. Thanks for popping in. Toodle pip
Posted by Meanqueen at 09:10