It's what I believe

Right where was I? Ah yes, someone asked me a question. I try and answer all questions, if I remember, and if they are not too intrusive. So here goes....the question, ooops, there are two questions.

I love the strength of your convictions - were you always like that or did it take a while to "grow into yourself"? I'd also really enjoy learning how you ended up being a lorry driver and how long you worked as one. Many thanks for your wonderful blog.
Anonymous on 24/01/13

Hi Anon, and anyone else who wants to read this. I'll take question one first, logical, ha ha. The strength of my convictions, was I always like that? Some of them I was born with, and some came at a later date. My mother went through the second world war in Hamburg, which was pretty much bombed out, she was a very strong woman and had clear boundaries of what is wrong and what is right. She drilled it into me to be honest, speak up for yourself, and tell the truth. She was right, it's the only way. I was a very shy schoolgirl, often upset by bullies, I was not very good at speaking up for myself then, my confidence came later.

I have always hated confrontation, I cannot argue with anyone and cannot have a row with them. I don't know how to row, I would rather walk away. I suppose that could be seen as a cop out, but I feel nothing is gained by two people going hell for leather tearing a strip out of each other. Sometimes it takes strength of character to walk away. My strength is knowing how to protect myself, and how to respect myself.

I have a very strong sense of what is right and what is wrong. I remember one incident when I was bullied at work. Another driver, a lot bigger than me, stole the ropes from the back of my lorry, I caught him walking away with them. I went to his lorry and asked for them back. He hurled a load of abuse at me. I found the strength to stand my ground. I don't know if you have heard of 'broken record', the one that goes round and round saying the same old thing, well that's what I did. I repeated over and over again, 'give me my ropes'. After what seemed like an eternity he finally lost his rag, and threw the ropes across the yard, more foul language, then he jumped in his lorry and fled. I stuck with it because I knew I was right, even though I was close to tears and worried sick that he might punch me.

Question two. How did I become a lorry driver, and how long was I driving for?
I left school with no qualifications at the age of fifteen. I worked in a variety of jobs, shops, offices, and factories. Then I got a job as a van driver, delivering spares for a garage. I liked the job because it meant I could organise my own work. I was given a new territory and went out and found a lot of new customers, I built up my round. At that time I contacted the driving school that I learnt to drive with, and asked for extra lessons because I wanted to take the Institute of Advanced Motorists test. I enjoyed driving so I though this would make me a better driver.

I passed the test and the owner of the driving school offered me a job as a driving instructor, so I took it. I found I didn't like this very much and only lasted nine months. By then I had noticed big lorries on the road and fancied doing that. I went to an HGV driving school and booked a course of lessons, ten days for £250. This was in 1976, so it was a lot of money. Thankfully I passed the Class 1 test first time, I had my licence to drive articulated trucks.

It took three months to get my first job, no one was taking me seriously, but I knew I had a right to a job, so I kept applying for any job I saw advertised. Once I got a start I could build up some experience, and apply for other jobs. To help me I also did extra driving tests, all voluntary, with the I A M, and RoSPA, I managed to get Grade 1 advanced certificates, in a car and a lorry. I also passed a test and got a licence to drive buses and coaches. I was qualified to carry hazardous goods in tankers, and had three years of transporting abnormal loads under police escort. The only jobs I haven't done are livestock and car transporters. I finally finished driving at the age of 59, after 32 years on the road. I have to say, that getting my licence was the best thing I ever did, I loved my work.

My years on the road taught me a lot about equality, as you can imagine I had an uphill struggle to be accepted by my male counterparts. What kept me going was the fact that I had a right to do any job I liked. I am pleased to see that a great many more women are now following their dream.

That part of my life is now over, but I still feel deep down inside that my destiny is in my own hands, barring illness of course. I have never blamed anyone when things have not worked out for me. If something goes tits up it's because I have made the wrong decision.

I hope that has answered your questions, Anon. Toodle pip. 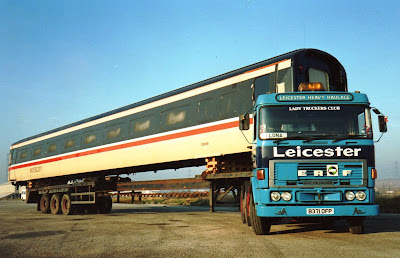