I was in love with Paul

Hello. I'm amusing myself tonight, reading old diaries. Can you remember what you were doing in 1964? I can't but it is all here written down. I was a skinny bean pole of a teenager with goofy teeth, specs, and a flat chest. I was in my last year of school and left in the July of that year, age 15.
It's a small diary and in the back cover is a pocket for a photograph. Paul was my idol, I dreamt I was in love with him every night. I screamed and nearly fainted when the Beatles came on the tele, and collected hundreds of pictures of them which were stuck all over my bedroom wall. 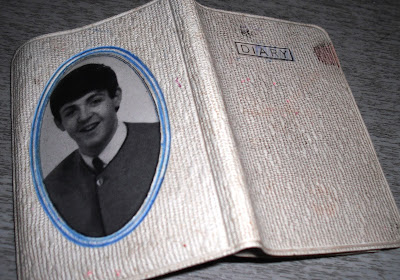 I have to laugh at what I wrote. I hadn't yet had a proper boyfriend, but had many crushes on all kinds of men, mostly those I saw on the tele. The notes page is at the front of the diary. Full of useful useless information, ha ha. 1964 was a leap year. The Olympics were held in Tokyo. Bamber Gascoigne is fab. Clay beat Liston. The Queen had a baby, so did Alex. I wrote to Bamber Gascoigne. Cambridge won the boat race. I got John Phillips autograph. He was an older boy who I fancied at school, and Bamber did reply to my letter, I was mad about him. 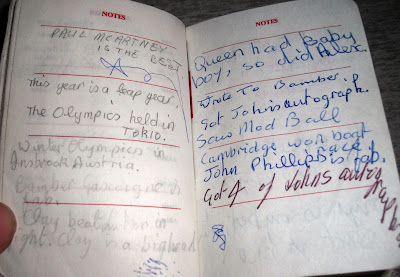 Here are some of my entries, an insight into what a 15 year old teenager got up to 51 years ago.

I made jelly and cakes at school. This was in cookery lesson. Another entry says I took the washing to school. They also taught us how to do household chores. Imagine if they did that now, ha ha.

I went ice skating at Nottingham with the youth club. I can skate, I fell over seven times. A few years later when I lived in Blackpool I went to the Ice Drome every week to skate. I got a job in the cafeteria so I went on the ice at every opportunity.

I cleaned my bike and mended a puncture. Then I painted the bike, and painted the handlebars silver. I had toothache. Next day I had two teeth out at Thompsons dentist. I remember that dentist, he had his surgery in the front room of his big house. He was horrible. I stopped going there.

Went to Derby with the girls. These were friends Rosy and carol, we went on the bus, I remember. I bought make up. Carol picked up a lad, and Rosy didn't like hers. Carol was snogging . I was not lucky with the lads.

What did I get up to while I was still at school? I went to trampoline club. Dancing classes after school. I went to Youth Club, usually wearing mums's calf length leather boots. I played snooker. I bought 'Jackie' magazine. I watched all the pop shows on the tele. Went to the bowling alley and was in the junior league. Went bike rides. Made my own clothes. Cut and coloured my own hair. Visited Grandma a lot, usually on my bike. Went to the pictures.

Friday the 17th of July was my last day at school. I remember running out of the school gates with a smile on my face. All the other girls were crying because they didn't know when they would see their friends again, except me and Celia. We couldn't get out quick enough. I got John's autograph, I had a big crush on him.

I had the summer holidays off before I needed to find work. We were all over the place, making the best of our freedom. Shopping, pictures, bowling, hanging around the town. On Monday 14th of September I started work at the Leather Shop. On Friday the 18th, I got the sack, ha ha. Didn't last long. I remember it was a pokey hole, a small shop with four floors and a narrow steep staircase. It was floor to ceiling with suitcases and bags of every size and colour. My job was to dust all the stock, over and over again. The manager and his assistant kept disappearing upstairs and leaving me. I had a good idea what they were up to. I was glad to leave, it was an awful job.

On Saturday the 19th I got a job at Woolys, and on the Monday I started on the sweet counter. The entry says, 'Woolys is fab, served all the time, it's great.' I got paid on the Friday and bought a pair of mod shoes, and some long white socks.

On Monday the 28th I went to the Jubilee Hall and saw the Kinks, with Carol. They were fab, got home at 11.20pm was great, really fab. Ha ha, everything was fab then. Hey look at this, I cut my hair short on the 1st of October. I'm still doing that now, amazing.

Oh look, they put me in charge of loose sweets. I went in the stockroom. I remember we had to stock check once a month, it was called 'doing the binders'. Everything was listed, I had to count it, and re order new stock.

On Sunday 20th of December I had my first real date. This lad came into the shop and asked me out. I said yes because he looked alright. He was very polite I remember. He was called Brian and we went to the pictures. We met at the bus station having both got a different bus from our villages. We walked from the bus station to the cinema. I had decided I wasn't too keen and when he put his arm around me I pulled it off. We walked back to the bus station and I was 50 yards in front of him, I wouldn't let him hold my hand. My bus came in first and I quickly hopped on leaving him standing there. When I got back home everyone was keen to know how I had got on. I said if that was dating I wouldn't be doing that again.

Aaah, those were the days. Such innocence. I was happy with my pop songs, watching the tele, fashions, makeup, friends, going out. Little bits of what I did then, I still do now. I even kept track of my money, being careful about what I spent it on. The boyfriends came later, I didn't get really interested until I left home at 18. Then it was all a whirlwind of fun and broken hearts, mine and theirs, ha ha. That's all in the later diaries, which I couldn't possibly talk about here. Oh alright then, I might pick bits out later on, a much edited version.

Thanks for popping in. Catch up soon. Toodle pip
Posted by Meanqueen at 20:40