There's a man in my kitchen.

Hello. Just a bit more to do. This nice young man called Ed came today. We had a laugh, he said I was quite good. I felt sorry for him because he had come from another job at Darlington and had difficulty finding a hire car, which made him late. These film people don't half get about. he has been on the go since four this morning and when he left me at 5.30pm he still had to drive to Boston. Here he is testing out some equipment. I don't know how it works, he is hoping for a 4G signal. Our mobile phone signal is a bit hit and miss and has a lot of flat spots. Anyway, he decided his gadget was not going to work for the live show tomorrow morning, and the van with an aerial on the roof would be sent instead. Oh my word, I don't know what the neighbours are going to think. Most of them probably won't be up at 5am. Yes, it's an early start.
If you put the tele on when you get up you might catch me on Good Morning Britain. 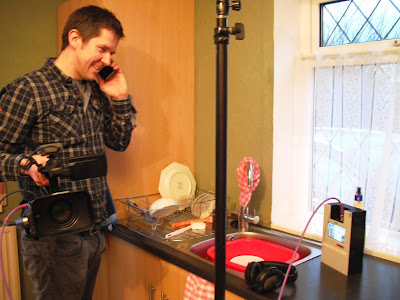 I had a dash to town at lunchtime, needed to pay a bill into the bank, and get some dog food. Yesterday I cooked a big pan of allsorts. Food that I bought a week ago that needed cooking and freezing. It is mostly bean salad with nuts, and a pot of couscous salad, with half a tin of spaghetti hoops I had lurking in the fridge. 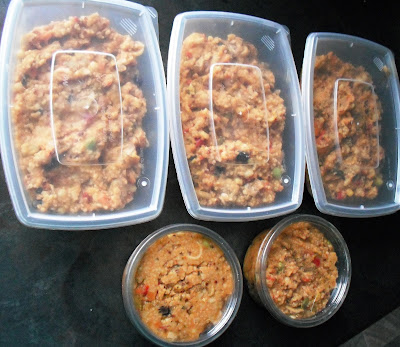 I've got another pan on the stove now, another veg stew. Yellow stickers of course. Sprouts, cauliflower, broccoli, and half a bag of crunchy salad. Total 45p. That will do for breakfast when the film crew arrive. Oh, and I will have a cup of tea to offer them, someone gave me a box of teabags yesterday, ha ha.

An early night tonight and an early start tomorrow. Don't think there is anything else in the pipeline, I can start the walking again. Some of you have been asking for links to the newspaper articles. I'll sort that out tomorrow. I still haven't seen the bit I did yesterday in the Calendar Studios. I've looked on the ITV site, I can see the film footage they did here, but not the studio bit. I'll have another look. Thanks for all the kind messages you are sending me, I am chuffin chuffed. Thanks for popping in. Catch up soon.
Toodle pip.
Posted by Meanqueen at 19:30