I am trying to get Chirpy to fly but he can't quite manage more than a few inches above the ground. Yesterday I twice had the cats inside, and put him into the hedge, but each time I went out to have a look if he was still there, and his chirping led me to him. Last night I left him out all night, thinking surely he would be gone by morning, but no, there he was, waiting for me at 8oclock.

Now when I call him he fights his way through the undergrowth  and hops onto my hand. If I don't hear him I call him and he starts chirping to let me know he is still there, it's amazing. 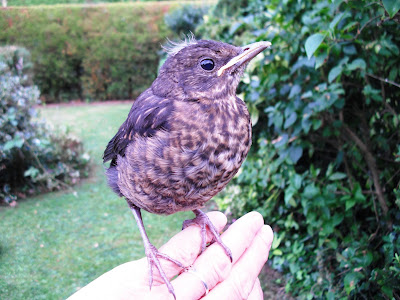 I can't put him back where he came from because one of the cats brought him in the house. I know they visit the neighbouring gardens so he could have come from anywhere.

He is in the hedge now at this moment, the cats are miffed that they can't go outside. I'll pop out later with the cat food as no doubt he will be waiting for me. I put some food on the ground but he hasn't attempted to take any yet. I'll try and encourage him to fly but maybe he can't if his wing is injured. Poor little Chirpy, I'll stick with it and maybe he'll get a bit stronger and will be able to find his own food.
Posted by Meanqueen at 18:00