My Super Yacht in London

Hey look at this baby then, isn't she beautiful. Wow, wow, flippin wow. I was grinning from ear to ear when I found it. Carol dropped me off at Farnham Station and I was able to get a cheap off peak return ticket. It was fiftyfive minutes to Waterloo Station. When I got there I found someone giving out free ice lollies to everyone, with compliments of Virgin. Then on to the Jubilee Line and I was at Canary Wharf in no time. There were lots of Olympic Meeters and Greeters about dressed in their pink and purple uniforms, so I asked for directions. A nice young lady gave me a complimentary map which will come in very usefull for future visits.

The place was awash with boats of all sizes, some of them amazingly massive. It must have taken a lot of skill to squeeze them into such small spaces. My first sighting of the ILONA yacht. 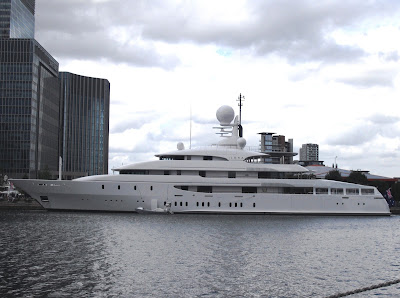 I found my trucking hat the other day after I did the post Name Game. I thought it would be a good idea to take it with me, you never know it might get me on board the yacht. Worth a try. 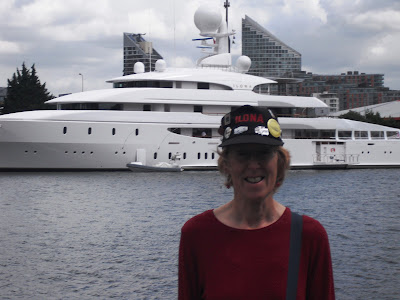 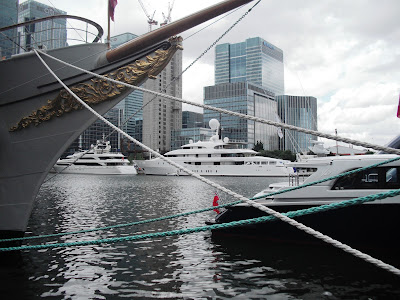 So sleek, so shiny, so classy. 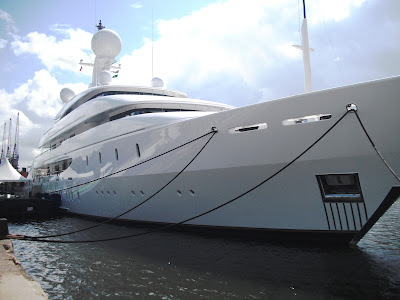 There was barriers in front of it, with cars and people coming and going. I made myself known to the crew members. I told them my story, and asked if I could go on board for a look around. I hoped they would take pity on a poor old pensioner who had come a long way on a train all the way from North Lincolnshire, just to see the yacht. I grovelled and pleaded, but to no avail, they wouldn't let me on :o( 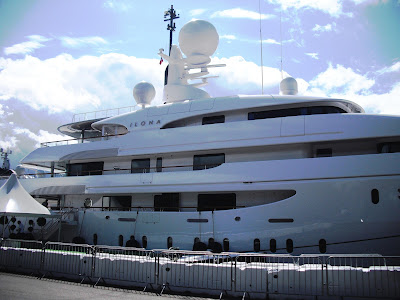 There was a bench opposite so I sat and ate my sandwiches, watching people coming and going. After a while a nice young man came across to speak to me, he was the second officer. I was able to ask him lots of questions, he said this was his main full time job and he travels all over the world with it. What a fantastic job, eh! Lots of pictures, I couldn't stop snapping I was so excited. 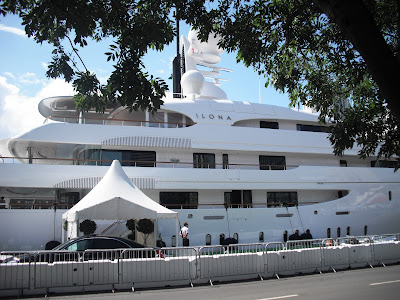 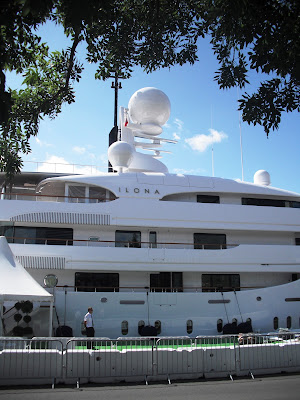 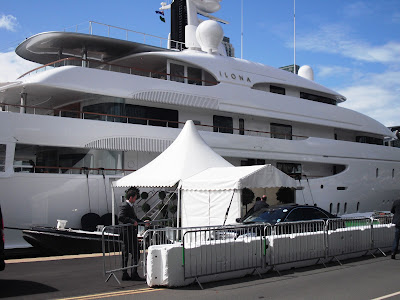 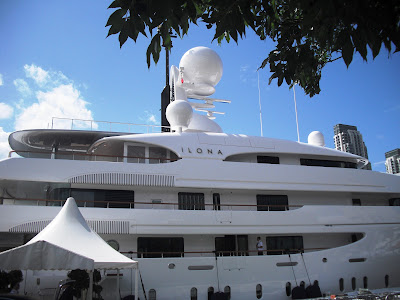 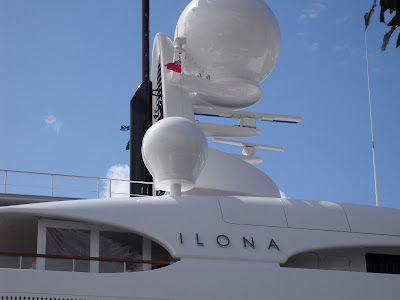 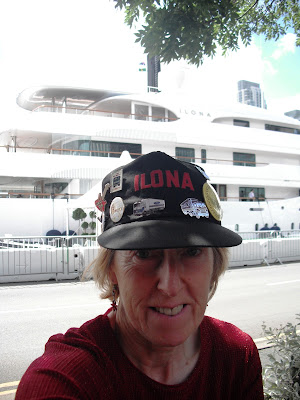 Here are a few other boats moored nearby. This German boat was massive. 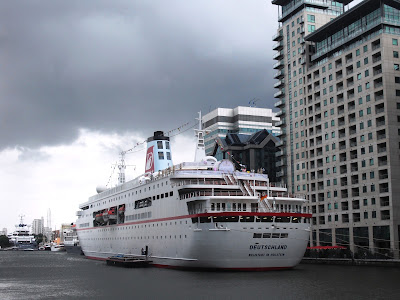 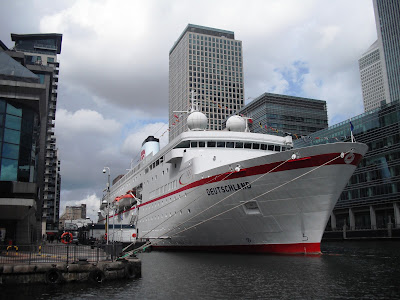 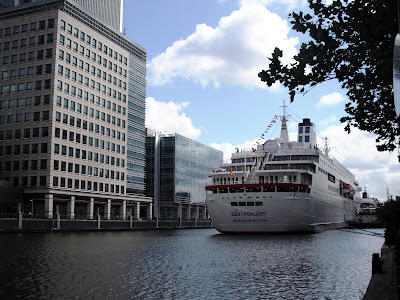 The biggest Super Yacht was the Octopus. 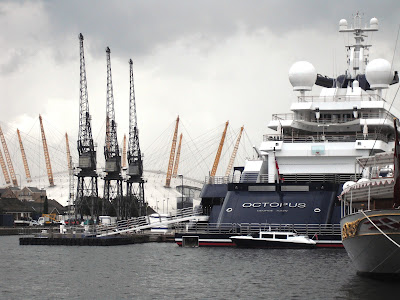 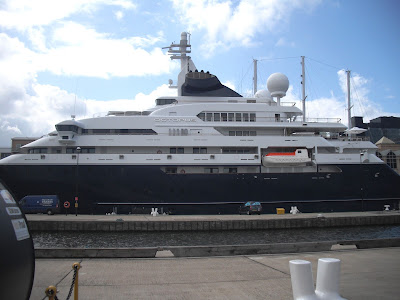 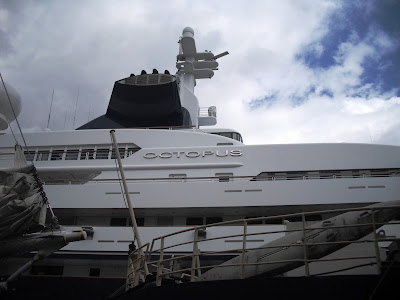 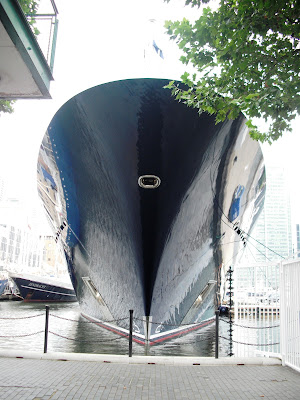 I bet this one looks grand when it's at sea. 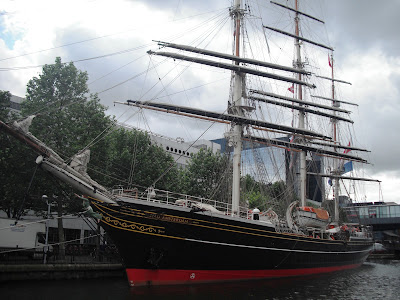 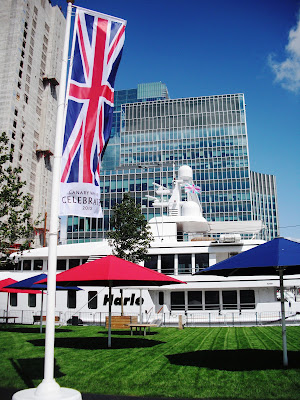 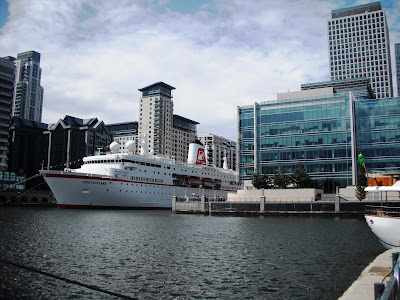 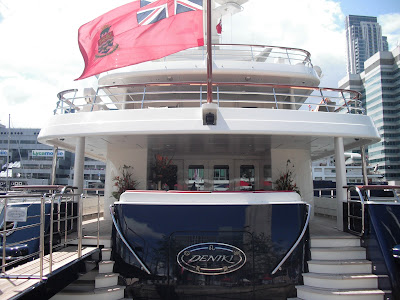 The big Octopus had a little Octopus runabout parked next to it. 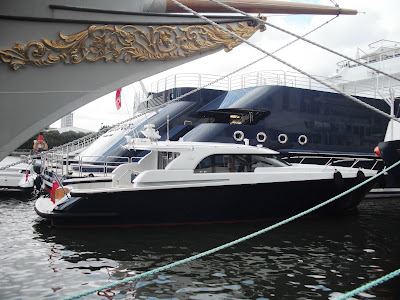 Of course the ILONA was the best one of all. 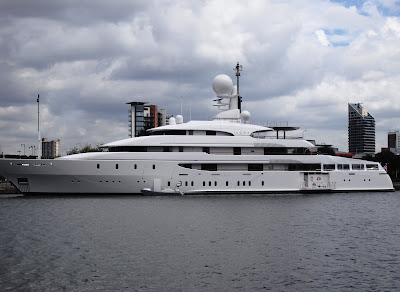 I am so pleased I went to see it. Another night with Carol tonight, tomorrow I'm off to Portsmouth. Toodle pip.
Posted by Meanqueen at 21:48