Hello. Here we are at Sid's Cafe in the heart of  'Last of the Summer Wine' country. They finished making the popular sit coms years ago, but they still live on in Holmfirth. It was one of my favourites and I still watch them on Yooootooob. The last time I was here they had a life size model of Compo stood outside the cafe, looks like that has gone now. 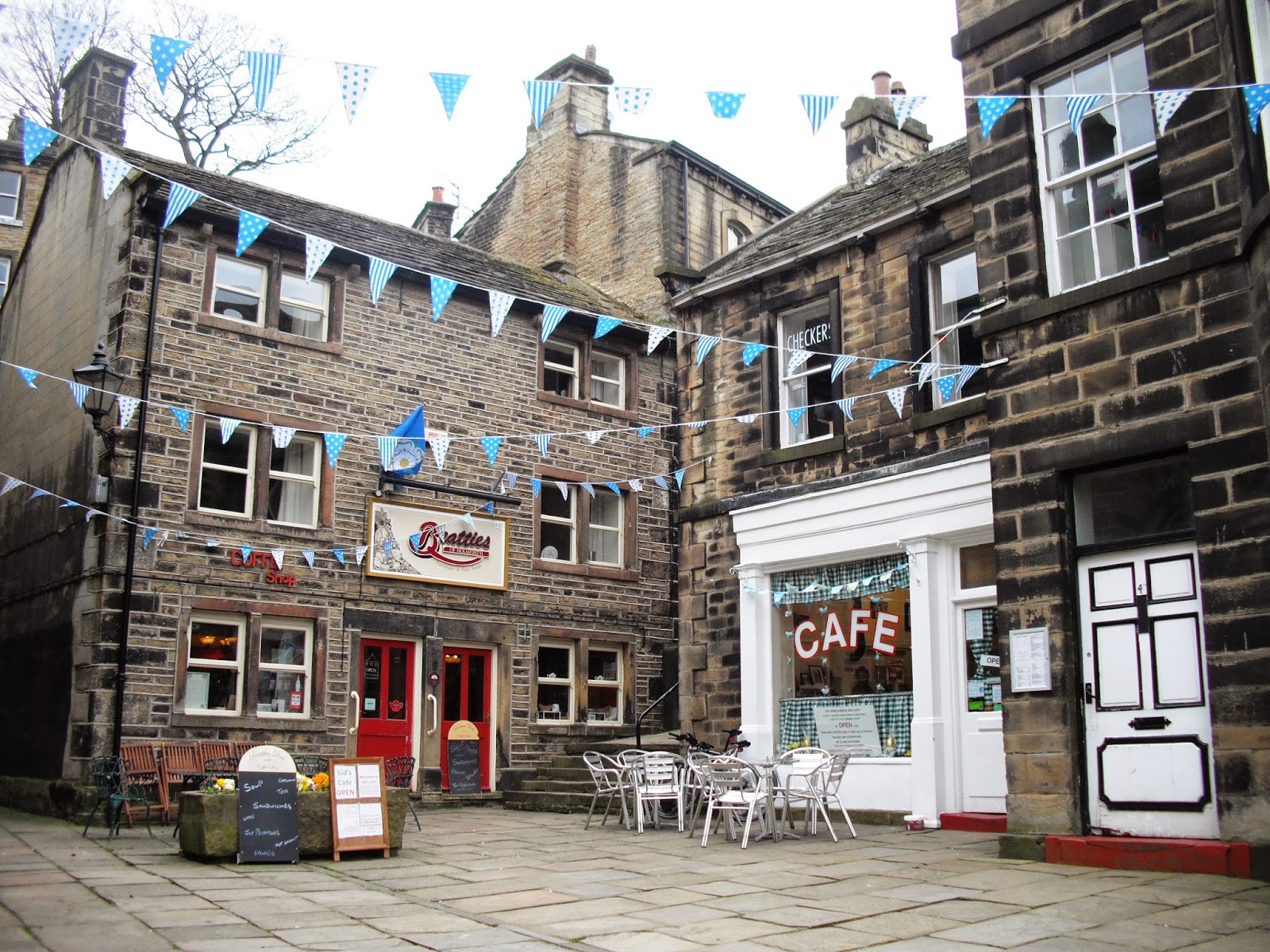 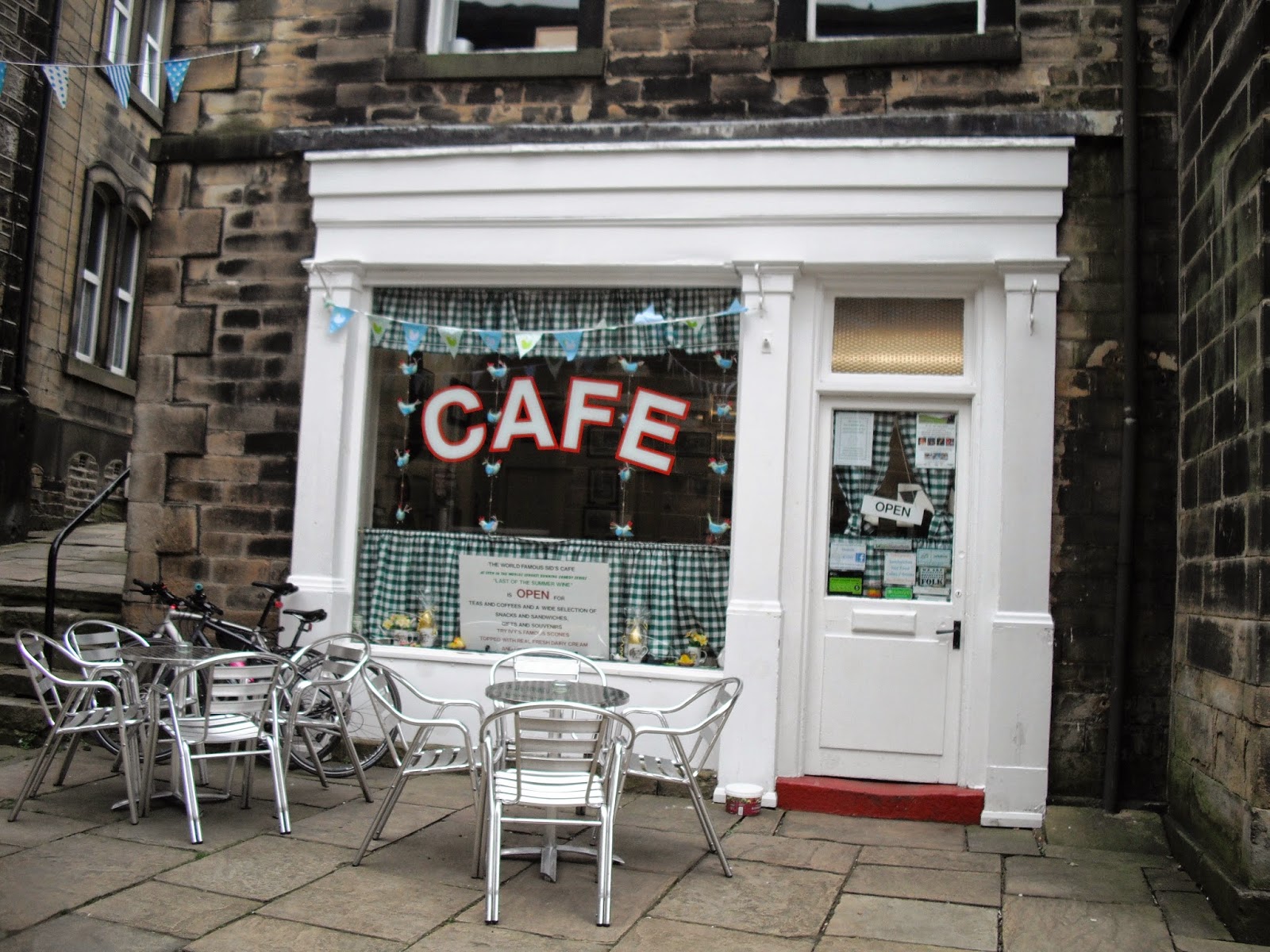 Opposite the cafe is the church. 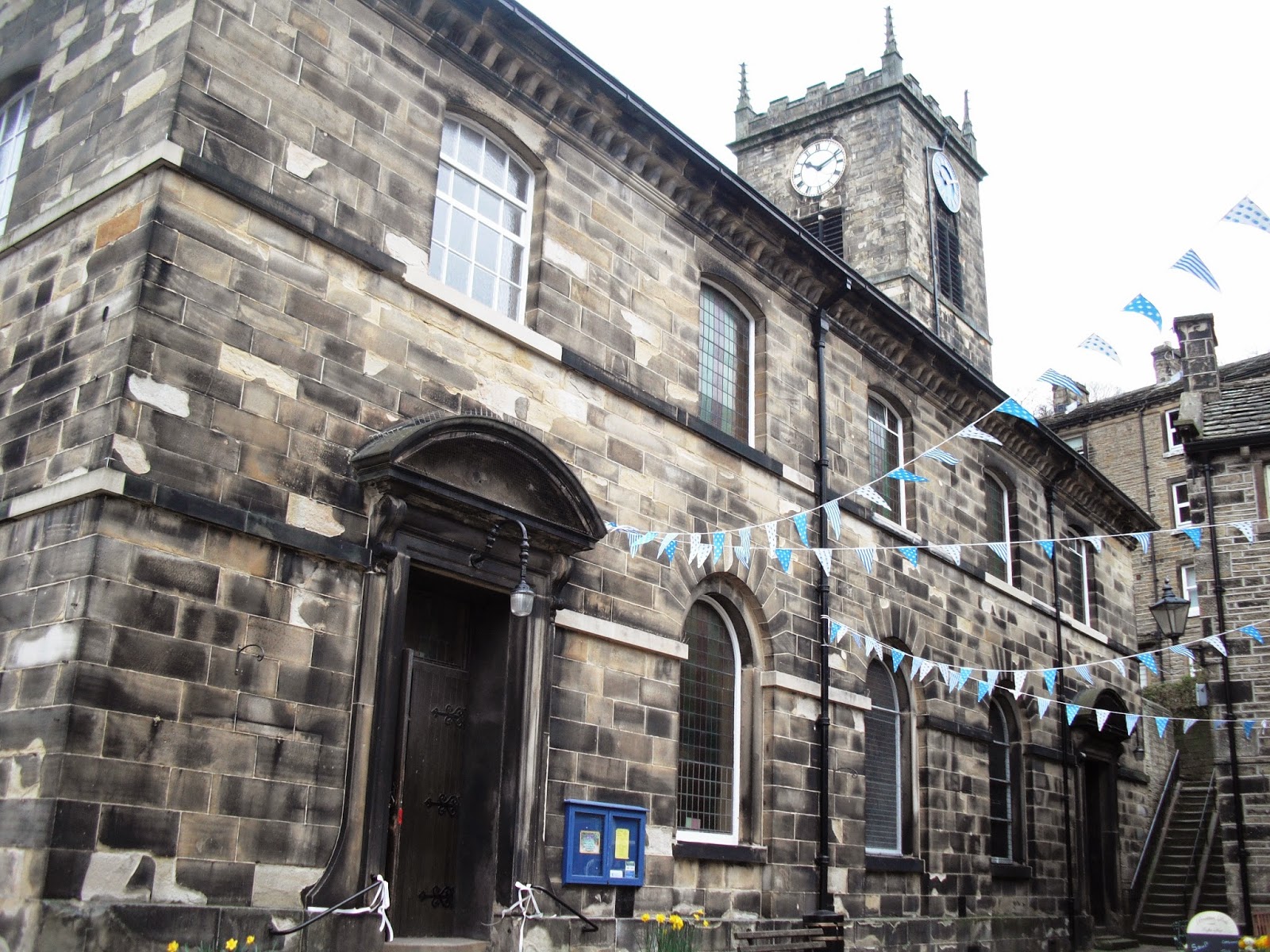 As I set off to head up the A635 Barnsley Road I came across a display of owls in a small park. Had to take a photo of this beauty. 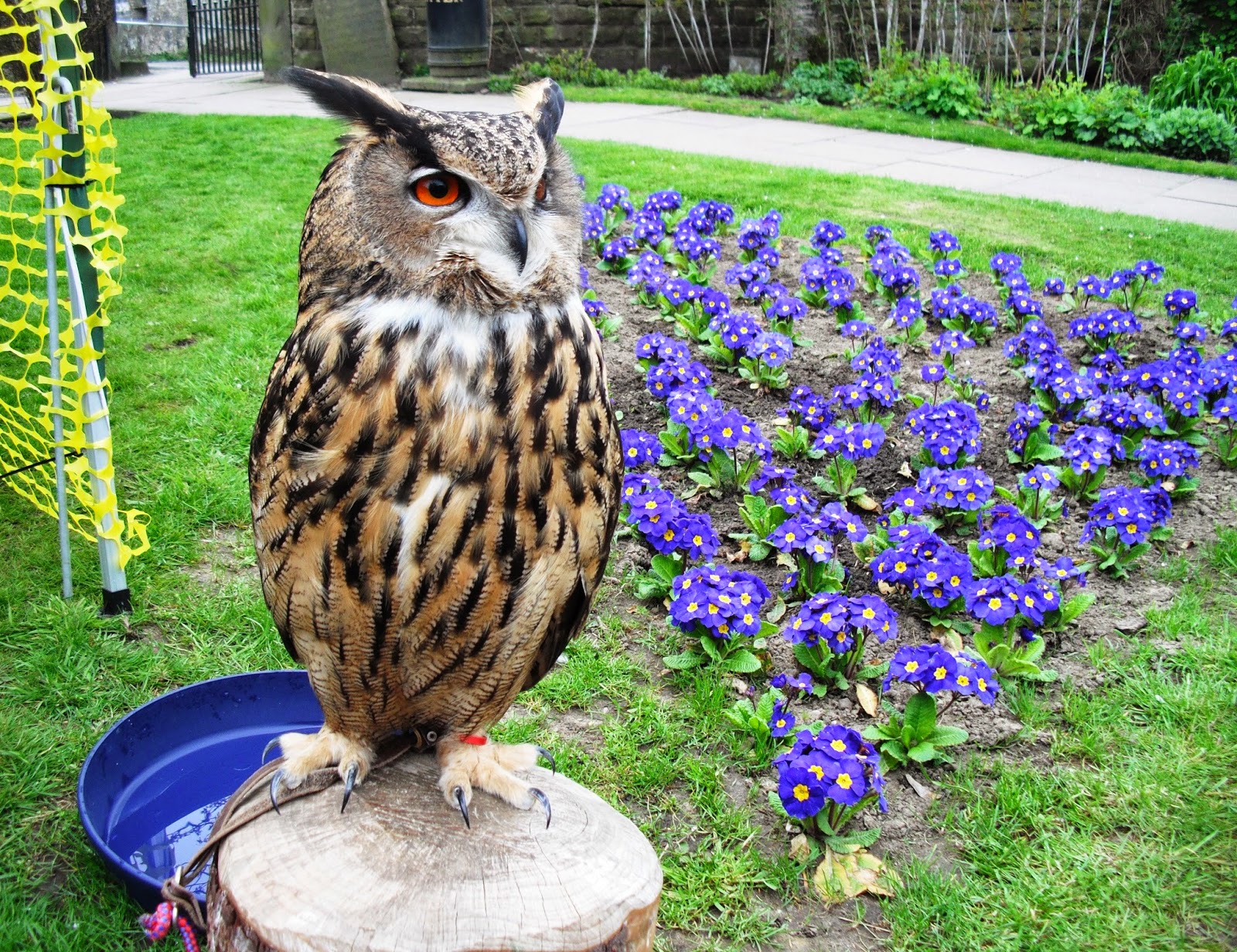 The snowy owl didn't want to look at the camera so the owner was trying to attract it's attention. 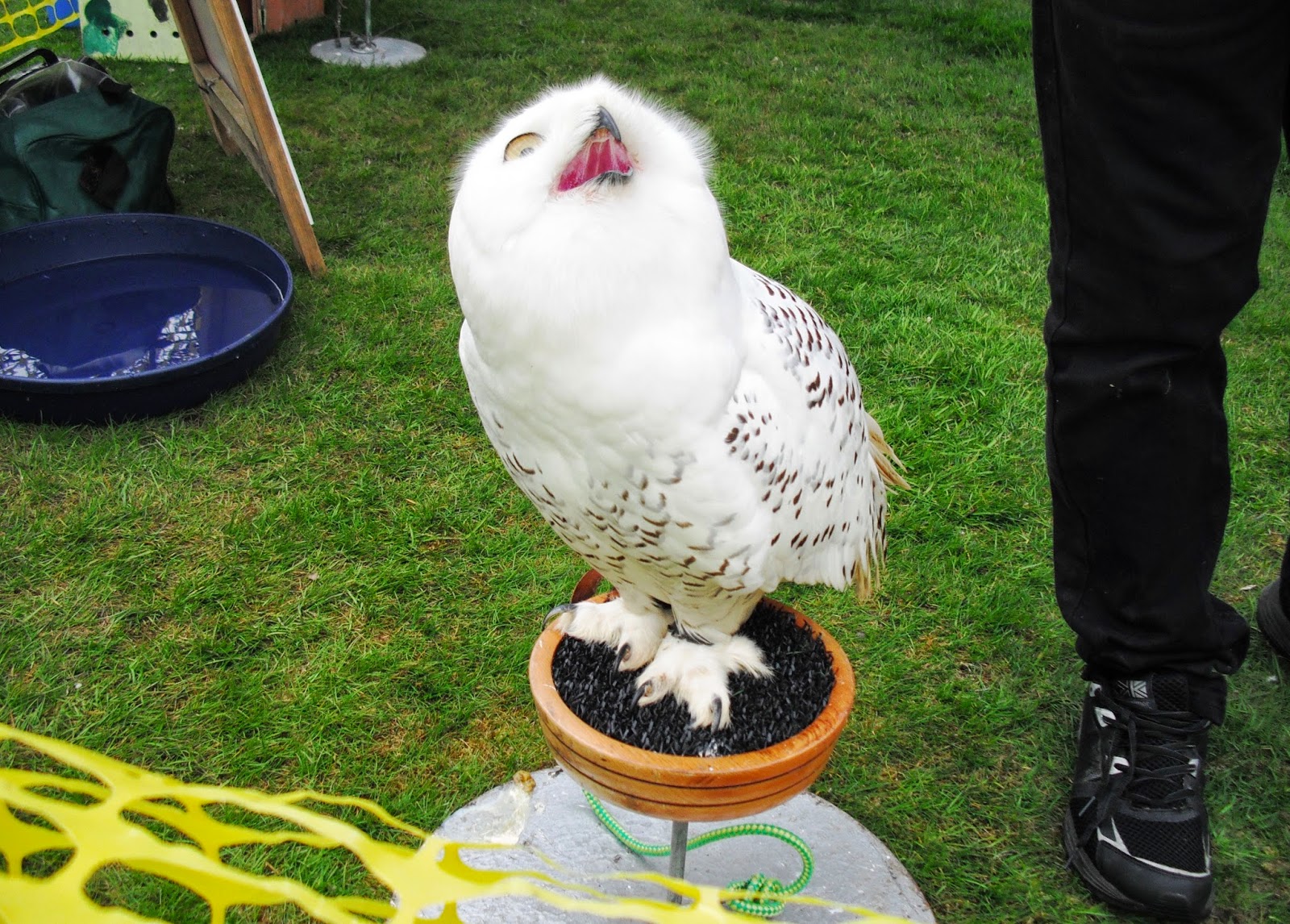 Nope, I don't want my picture taken, oh alright then, but I'm only showing you one eye. 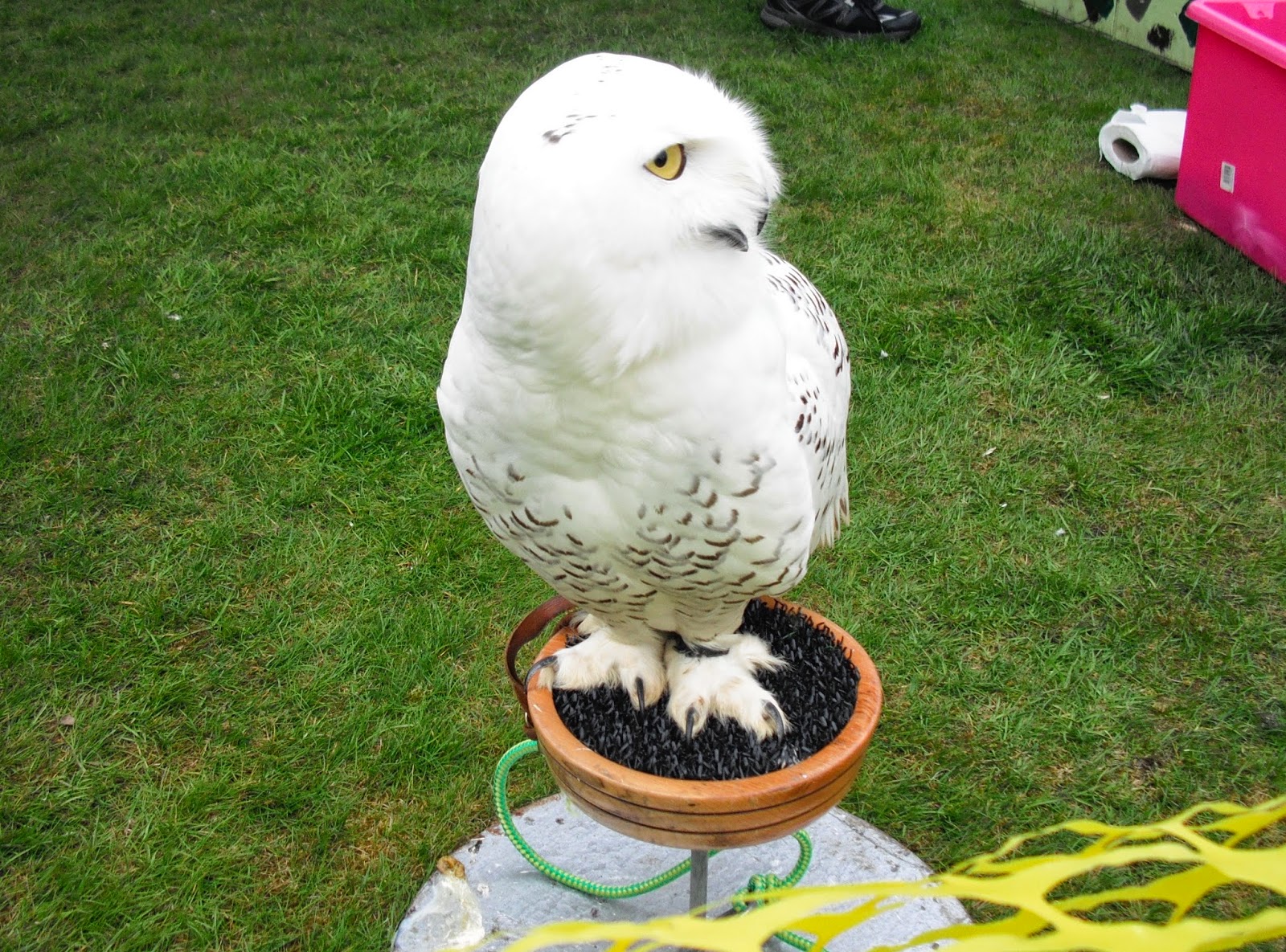 The signs say it is a rescue, and they are asking for a suggested donation of £3. That's a bit cheeky I thought, a donation should be anything you can afford, or want to give. 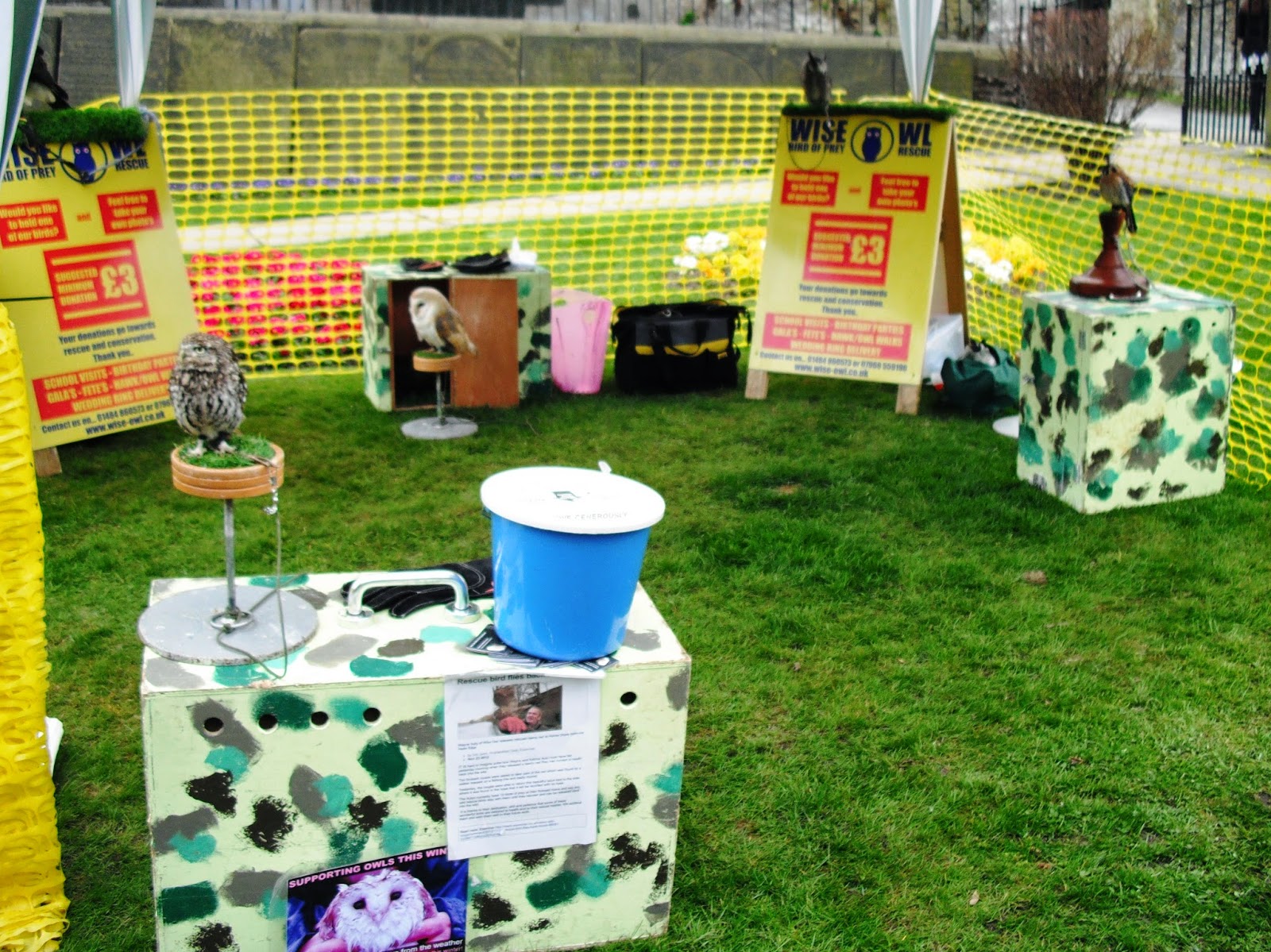 Off I trundled, out of Holmfirth, through New Mill, coming off the main road to take a minor road through  Lane Head, then getting back on the main road through upper Cumberworth and Denby Dale. This is the viaduct that crosses the road at this point. 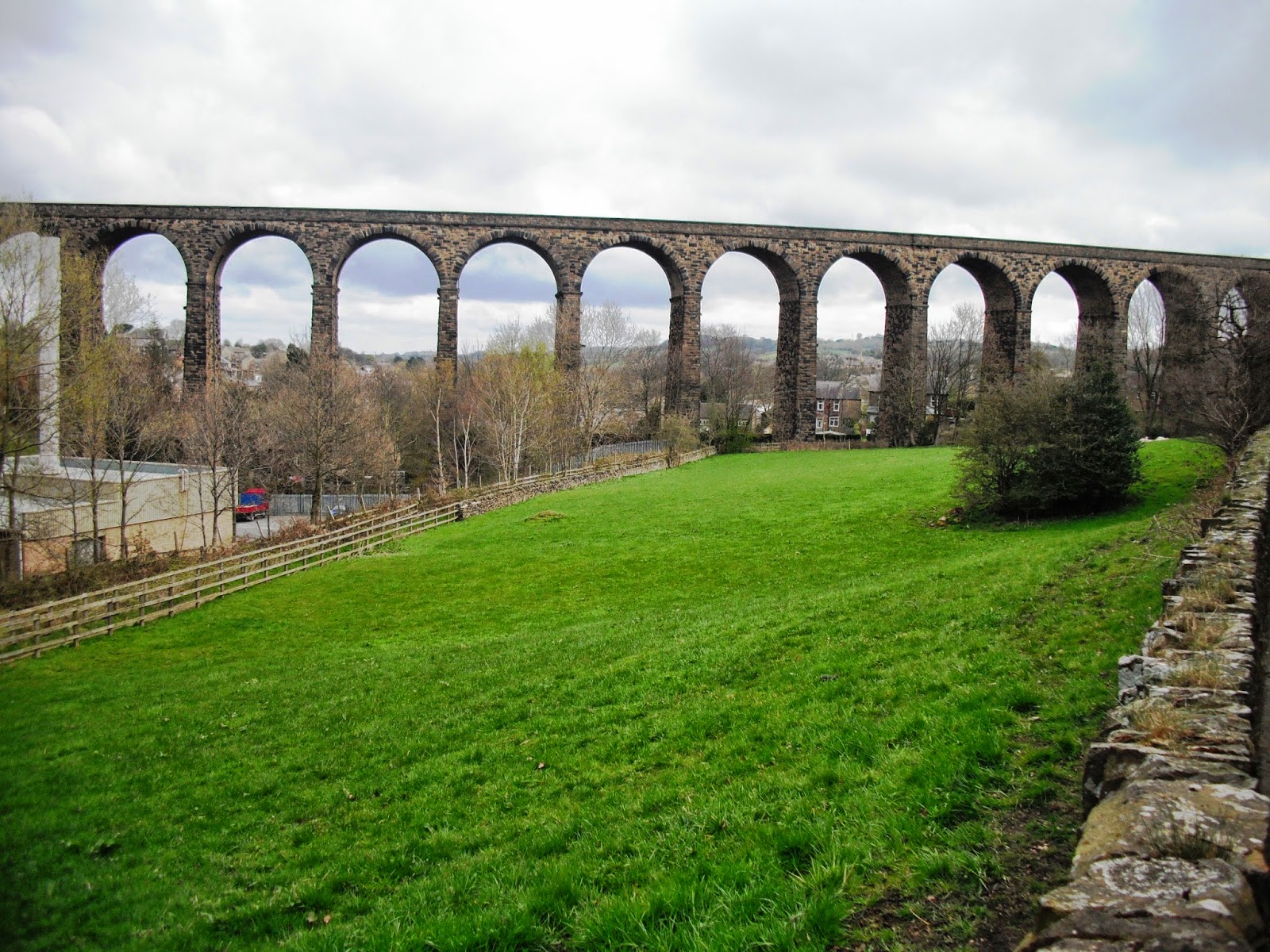 A bit further along the road I came off again to take a footpath into Cannon Hall Country Park. I sat down at the picnic tables and had a bit to eat, a bit of  quiche left over from last night. The place was very busy, the fine weather had brought everyone out for a day in the park. 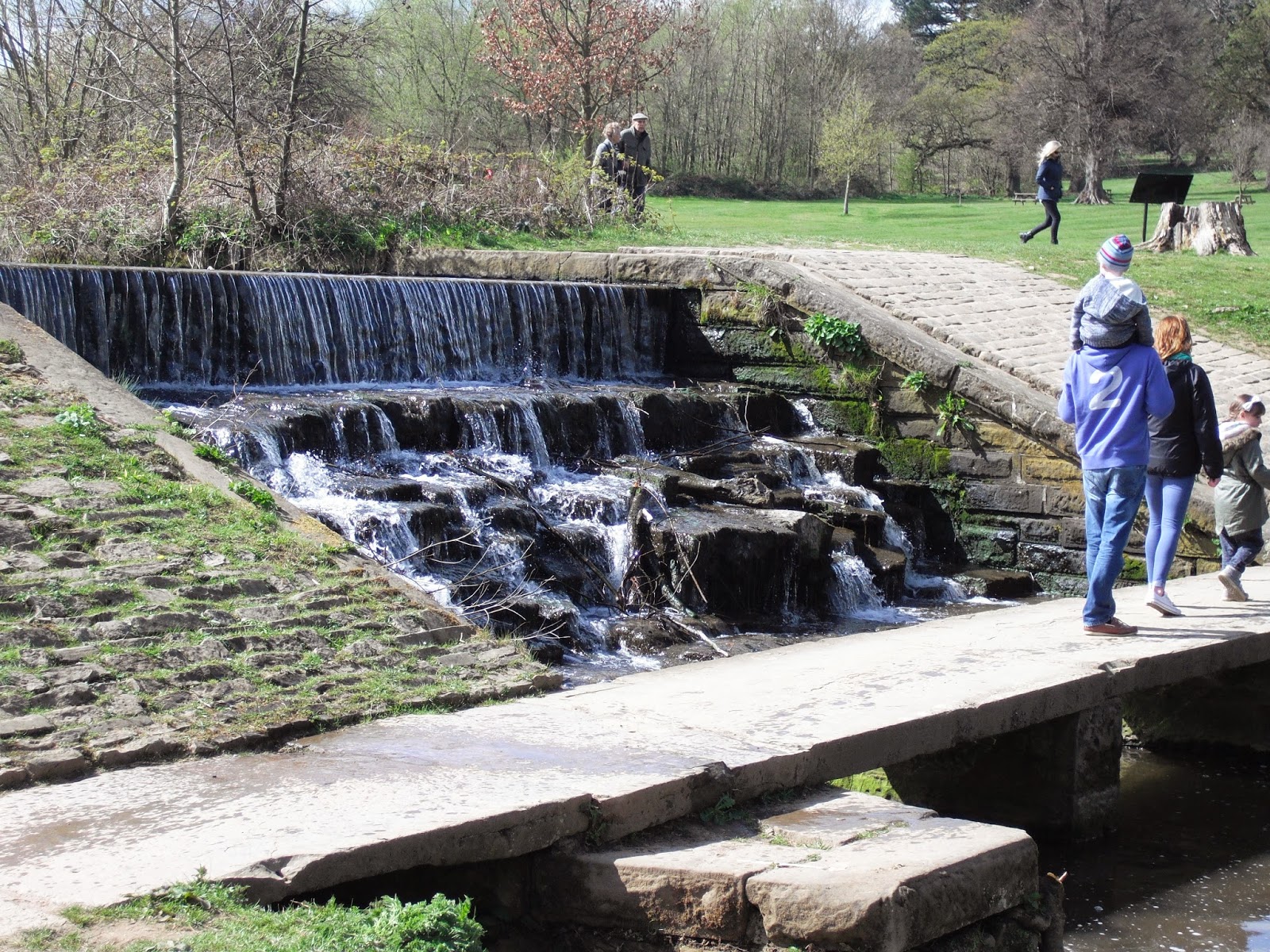 I walked past the lake and out of the park into Cawthorne village. This old timbered building is a museum. No time to stop today. 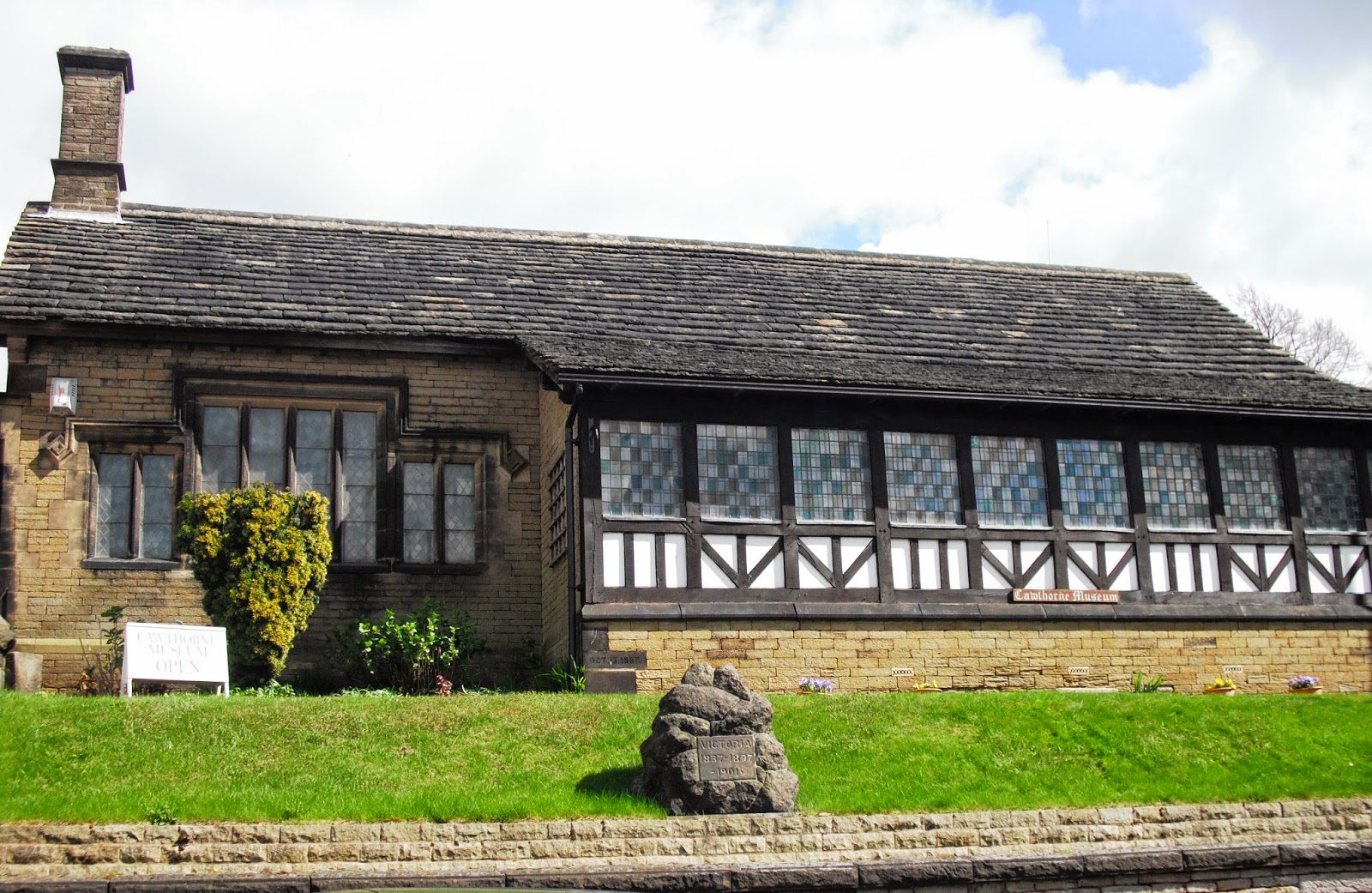 Which way? Errr, left to Barnsley. 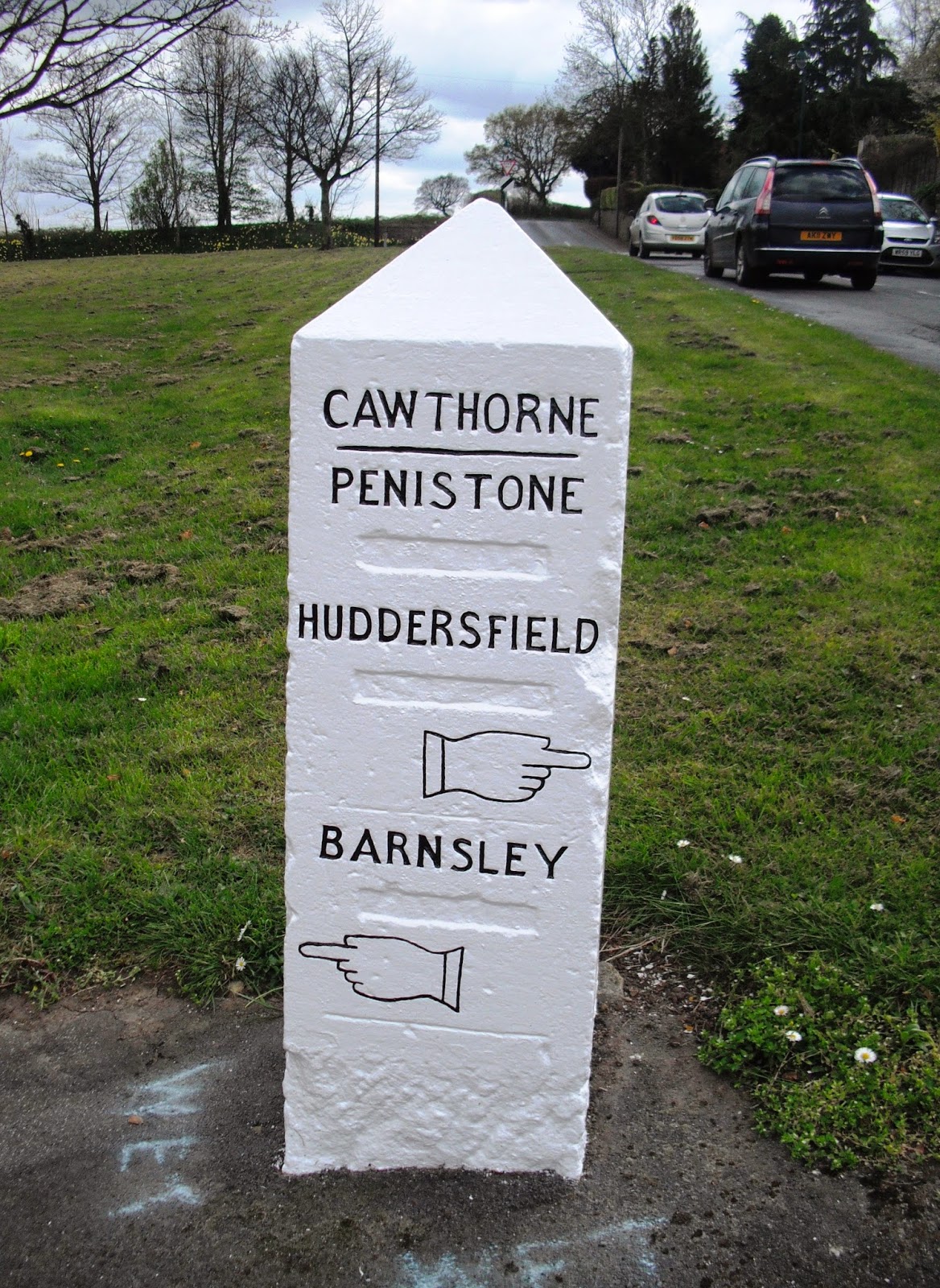 Back on the main road, I marched pretty quickly. Only three miles to go. Someone must have been busy with a paint brush. They look nice don't they. 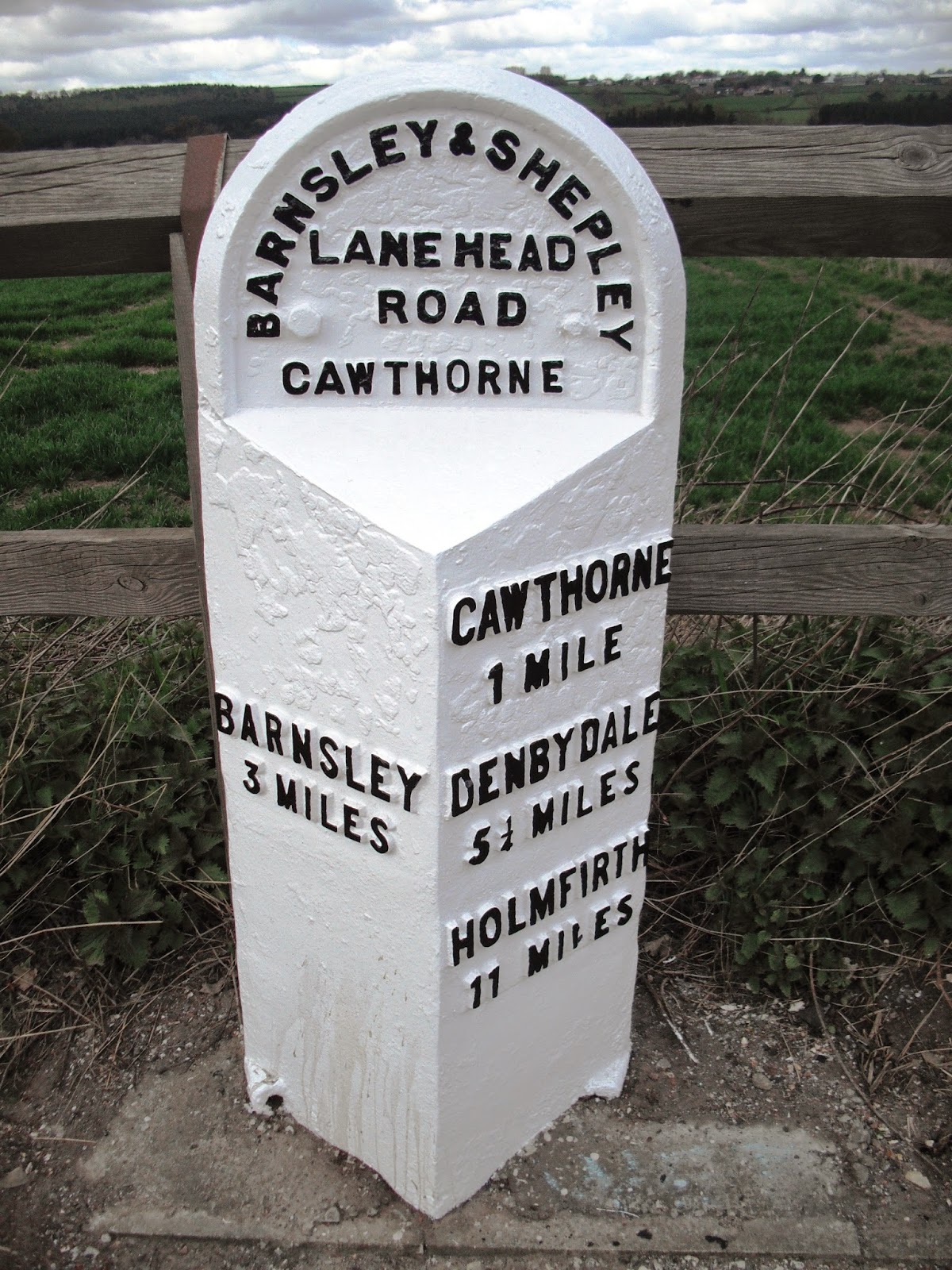 Coming into Barnsley I picked up some supplies at a Tesco Local store, not much in the way of yellow stickers. 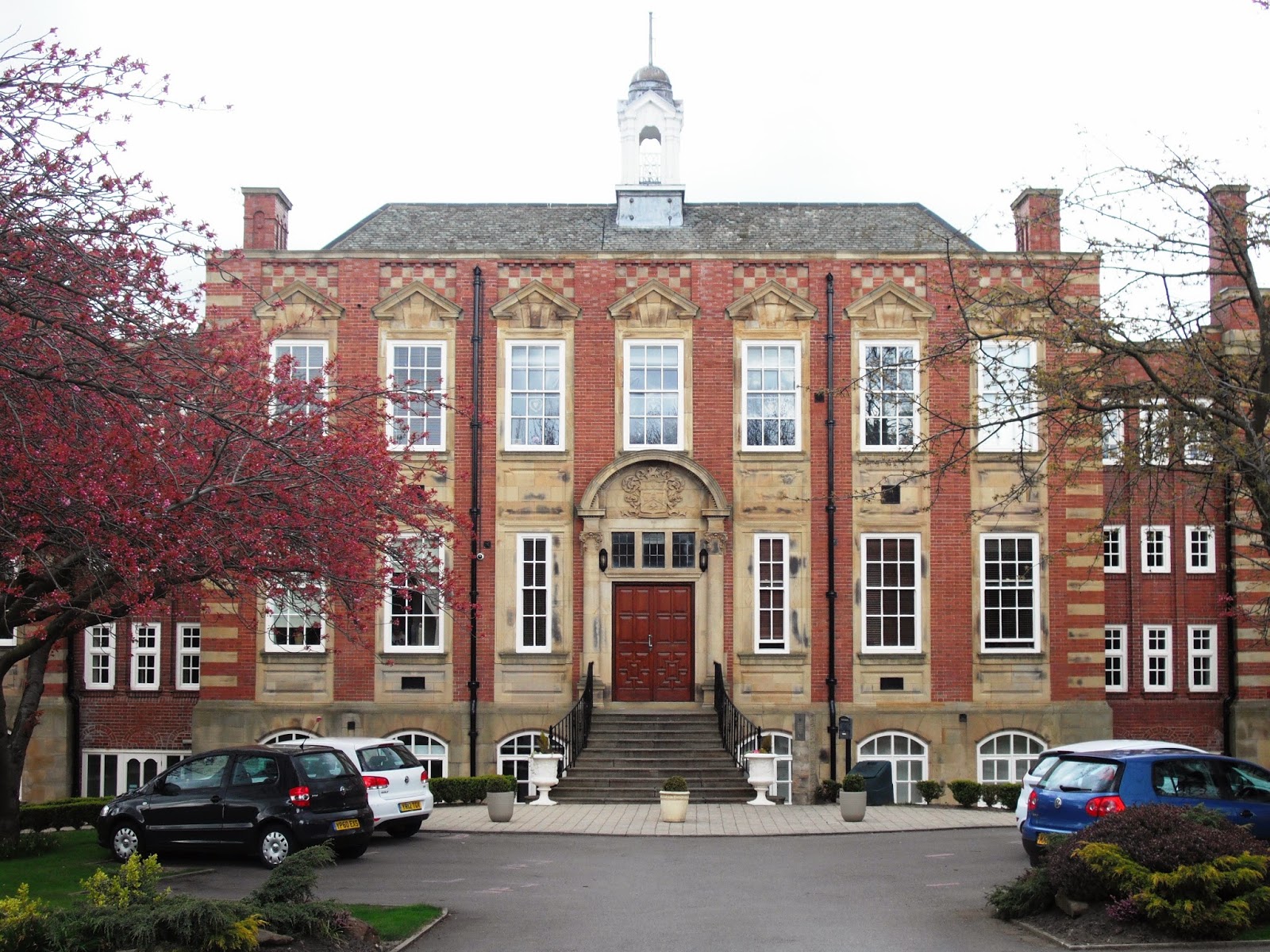 It was a school, I wonder what it is now. 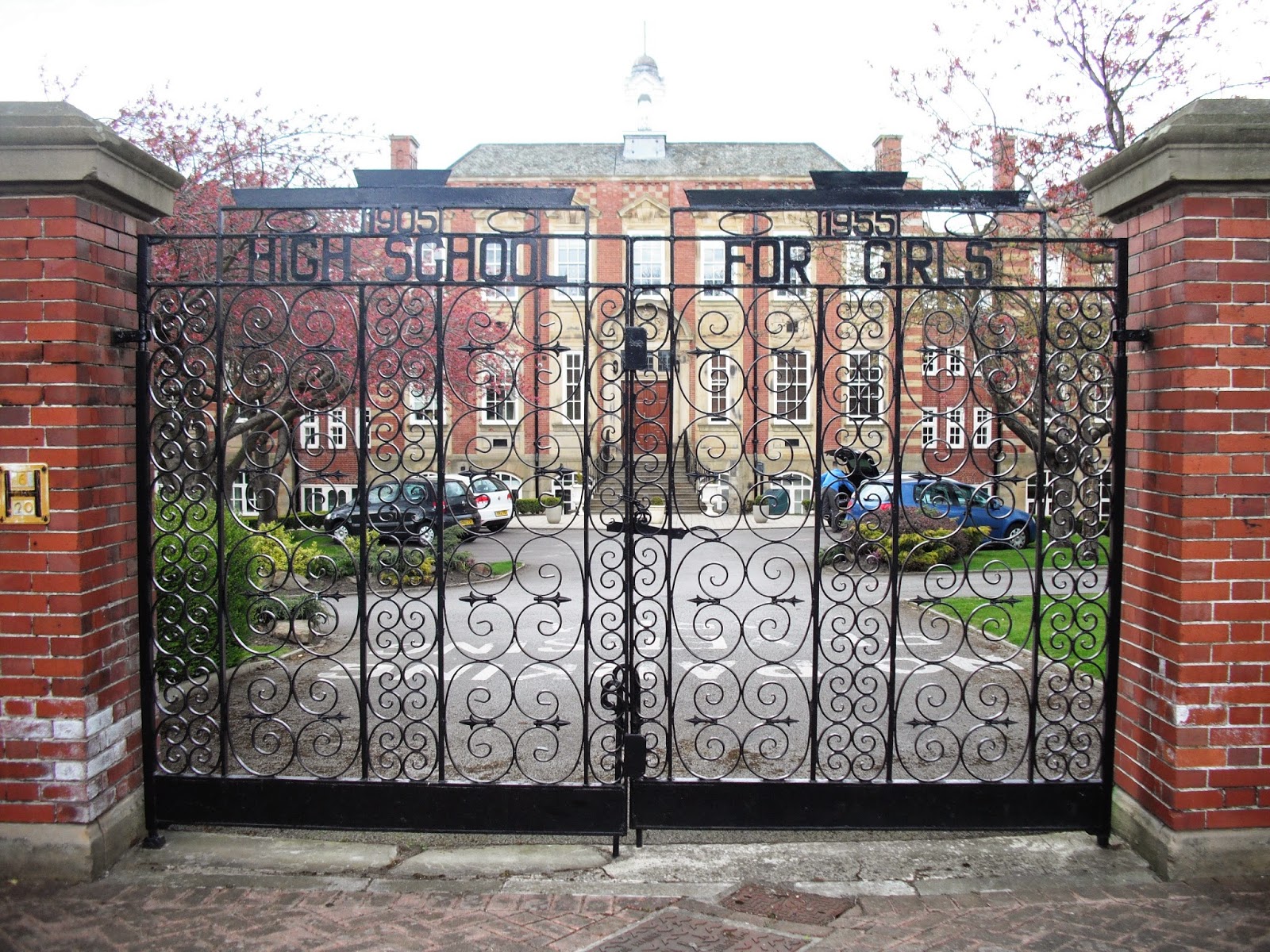 A reminder that Barnsley was at the heart of the coal mining industry. 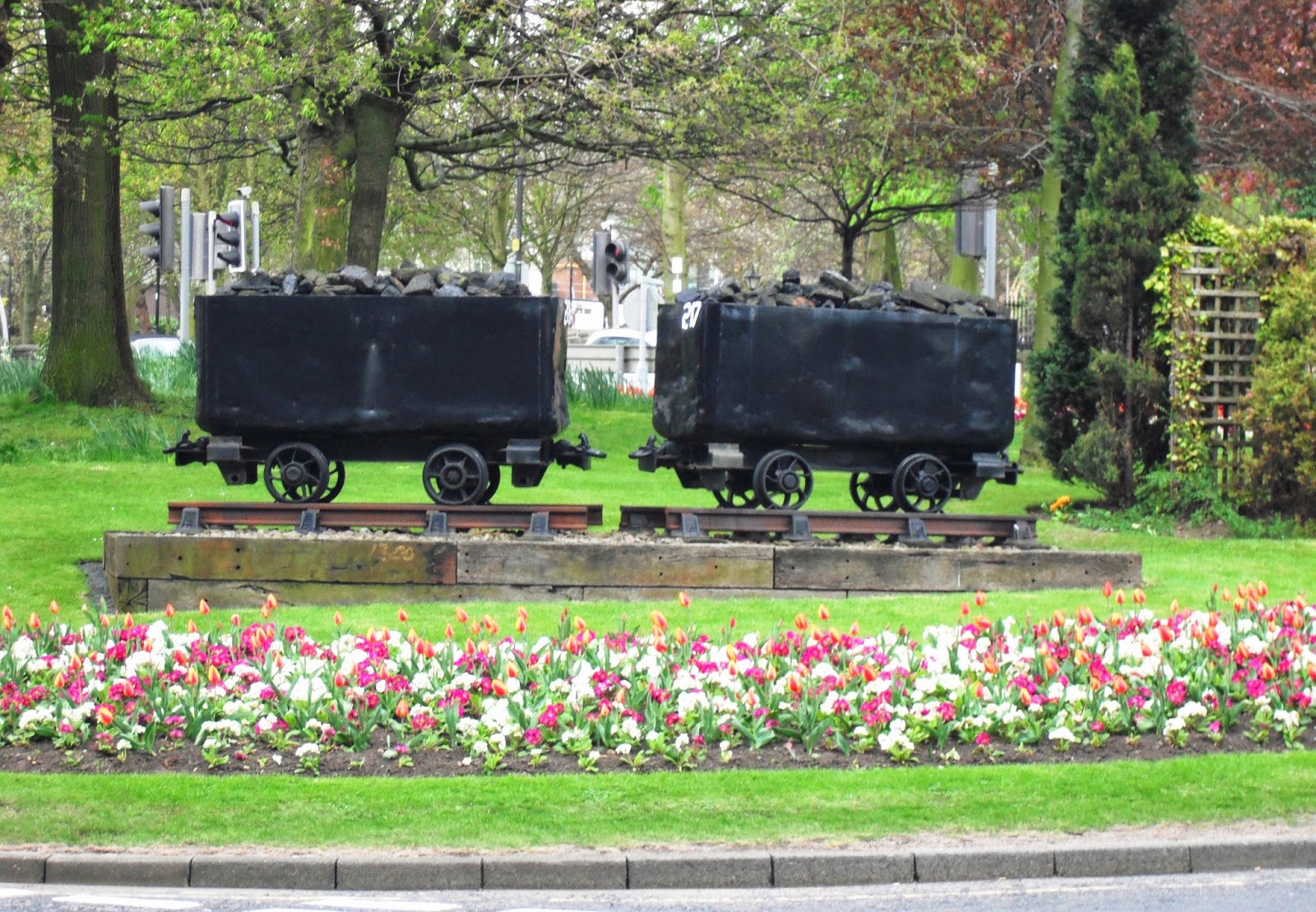 Wow, this building is magnificent. I haven't been to Barnsley in many years, and even when I did come it was always to a concrete making plant with a load of cement, so I have never seen much of it. Time was getting on and I needed to consult my maps and decide what my next move would be. It was 4.30pm still time to do another one and a half hours walking, but which direction? I found the bus station and used the conveniences, planning to sit down for ten minutes and study the next map. There was a few people about waiting for buses, and what did I see, a bus for Doncaster, and the driver was in it. I checked the time table, he was due out in five minutes. What did I do? In a split second decision, I got on it, ha ha. I was laughing my little socks off.

It wasn't the distance left to walk that influenced my decision, I could easily do another couple of days. It was the fact that I would find it very difficult to find a bed. Which ever way I walked out of Barnsley, and indeed beyond, I would be passing through villages with almost nil B & B's. I could have probably found a bed in Barnsley, and Doncaster, but they wouldn't be spaced the right distance apart and I would have been forced to have shorter days, which would have meant an extra overnight stop. Common sense told me there's no point in stretching it out, just get off home.

I got off the bus in Doncaster Interchange and walked to the railway station, and within ten minutes I was on a train to Scunthorpe. Janet picked me up at the station, and here I am back home. Today's total was 15.5 miles, so instead of doing 130+  in seven days, I have done 92 miles in five days. Sorry to disappoint the readers who were following me, but don't worry, the last bit wouldn't have been very interesting.

Thank you for joining me on my trip, I'll catch up with you tomorrow.
Toodle pip
Posted by Meanqueen at 22:37