Hello. The first sunny day we've had for a week or more, best get out there for a walk. I made a small pack up, only going to be out for about four hours, so just need something to keep me going. So, step out of my front door and go. I've posted this view before, the track goes along the bottom of a wood, with the river in the distance across the fields. 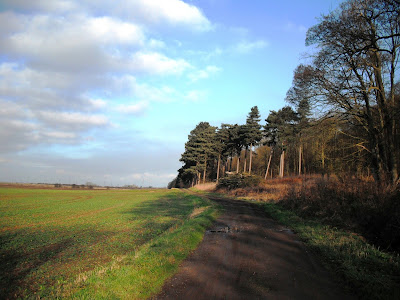 Approaching the Industrial Estate I found a colourful plastic coated picture dumped in the hedgerow. Shame no one will see it there, let's put it on the fence. Very artistic I thought. 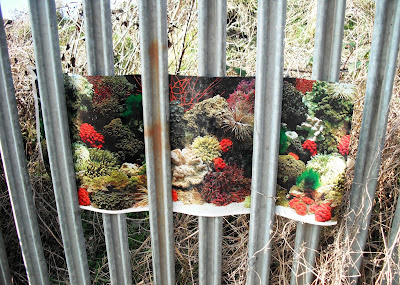 Oh dear, the car park of the vacant office block has been invaded by the travelling community. I thought they lived in caravans because they like travelling around. Making a mess as usual. 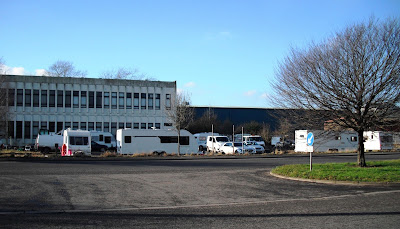 I followed the River Trent, there is a boat unloading at Flixborough wharf. Can't get close enough to read it's name, but if I go on the Marine Traffic web site it tells me that is is still moored now, it's name is Scanlark, it's flying the St Vincent Grenadines flag, and  it's gross tonnage is 1371. Have a look here for more details. 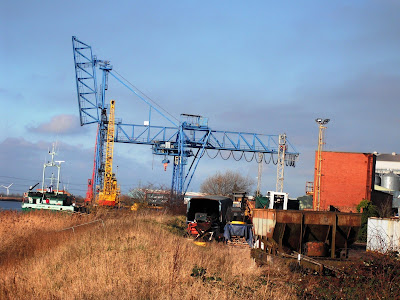 Further along the Trent I came across two more boats at Gunness Wharf. 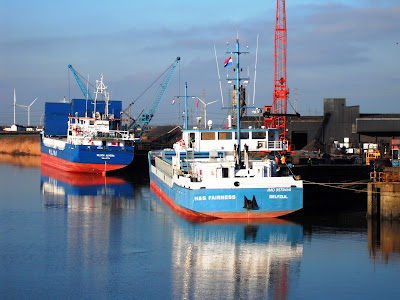 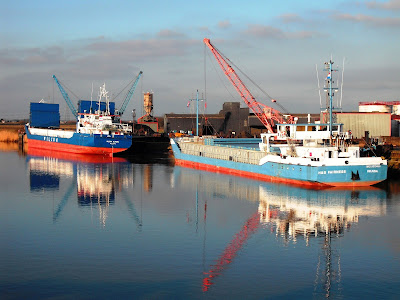 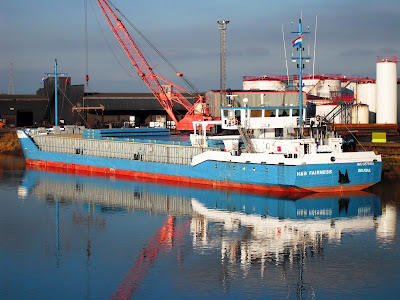 Wilson Almeria is flying the Maltese flag, it's home port is Valletta. It was built in 2010. It arrived at 23.45 last night. 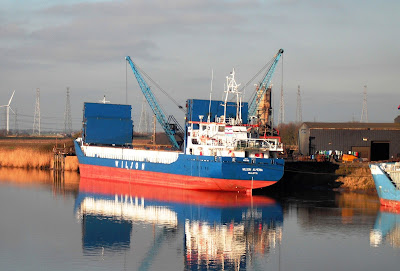 I bet you really wanted to know that information didn't you, ha ha. The Marine Traffic site is really interesting.

If you want to see where my yacht ILONA is, have a look here.  It is actually moored in London at the moment, at Marsh Wall, the Isle of Dogs. Perhaps I should go down there and see it again. I last saw it in 2012 when it was there for the Olympics.

Ooops, forgot, getting carried away, I'm supposed to be writing about my walk today. From Gunness, I took a track which is an old railway line, now for walking and cycling. It goes over the M181 close to the roundabout at the end of it. In the distance you can see the big Tesco store where I do my yellow sticker shopping. 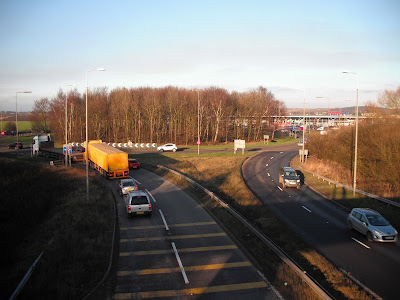 Homeward bound now. I walked through the outskirts of Scunthorpe, taking the most direct route back. Leaving the houses behind I picked up a tarmac footpath, which led onto a rough track and through some fields. The sun is just disappearing over the horizon. 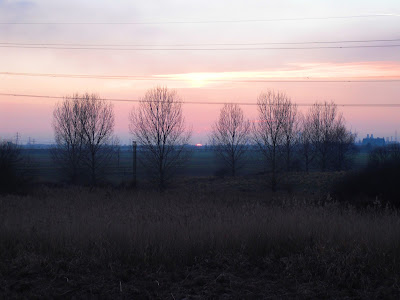 Coming into Flixborough village with three miles left to do, it was starting to get dark. As luck would have it, someone I know spotted me and stopped to ask if I want a lift. I gratefully said, yes please, he was going my way, so I hopped in. It was 5pm when I landed home. Checked the mileage on Bikehike, and it was 11 miles, so I'll add that to my total on the calendar, making it 62 up to date. Nice to get back into the swing of longer walks again. Must do more.

Pleased to report that Bugsy is doing well. The tablets he is on are making his poo really sloppy like oxtail soup. Other than that he is eating ok, and moaning when I haven't given him the right food. There was the option of taking him for another injection today, but I phoned the vet and said he is doing ok and doesn't need it.

Thanks for popping in, we'll catch up soon. Have a nice weekend.
Toodle pip
Posted by Meanqueen at 20:51