Life is good on a pension

Hello. Something someone said about not knowing all of my story which got me thinking. There must be newer readers who haven't read from the beginning, so will not know the background to my frugal journey. I've had a look through my bank statements and found some scribbled notes which will shed a bit of light about how skint I actually was. I can't put actual dates to some of the reasons why my income dropped very low, but it was round about my early to mid fifties when I started reducing my driving hours which reduced my paid income. I was not enjoying the job so I chose to work less hours.
Before that I was also running a small businesses, I bought in stock and sold at shows and events. It was a lot of work, making a little bit of money, but it didn't last very long. The recession kicked in and people stopped buying non essential items. I had to close it after three years, because I was starting to lose money.
After that, I started another business, an Introduction Agency/Singles Club. That was also a lot of work while still driving part time. Over three years it just about covered the expenses so I closed it, having made nothing.
A while later I took a short break from driving and bought a new catering trailer, got a pitch for it and started work on an industrial estate. I didn't last long. It was the wrong time to start, middle of winter, business was slow, and I hated the smell of the cooking. I sold the trailer and lost £1000 on it. My bank balance took a hit and was very low, so I had to go back to driving to earn some money.
When I was 59 I had an operation and took 12 weeks off to recover. I wanted to go back to work, but they announced they were closing the depot so I didn't have a job to go back to. I was a job seeker for the last seven months until I could fully retire at 60.
I have always meticulously checked my bank statements, keeping a beady eye on that bottom line. Sometimes it plunged perilously low so I had to do some calculations to make sure there was going to be enough to cover the standing orders, and pay the mortgage. If it dropped too low, there was only one thing to do, earn more money.
Here are some of my scribbles. Note to myself  DON'T SPEND. 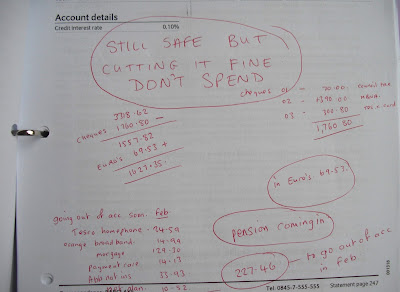 Only £547 left in the bank on this statement. I think that was two mortgage payments. There was a lot of juggling going on. 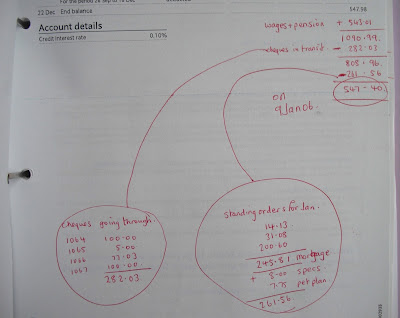 Here the balance didn't look too bad, but when I calculated everything that was going to come out during the month, it dropped dramatically. 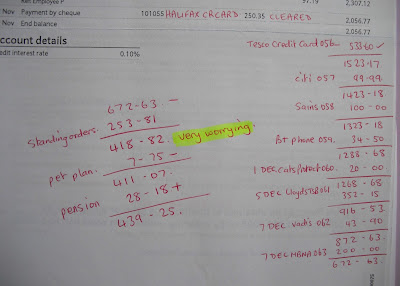 This is low but not too bad. Got to get that money in money out balance a bit better though. 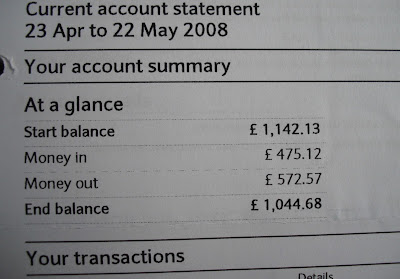 Going down again. all my business transactions were going through my current account. I cancelled the business bank account when they started making charges. My accountant advised it was ok to do this as long as the paperwork was all in order. 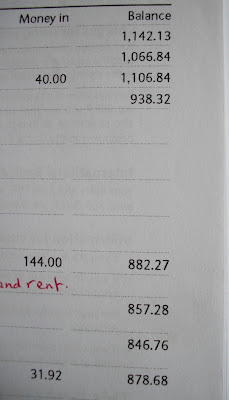 Oh my gawd, I think that was the lowest. 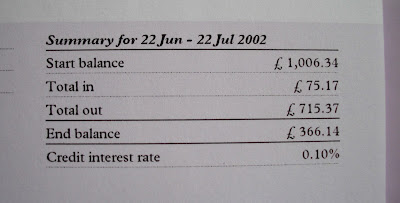 I was sailing a bit close to the wind at times, but strangely enough I wasn't too bothered. I never dropped below the bottom line, even though it was a challenge to stay afloat. My first state pension payment of £136 was paid on May 18th, I had a balance of £1,400. I felt safe then knowing that this amount would be arriving every week and would never stop. I was also receiving a small amount from a private pension which was £33 every four weeks. Both of these have increased over the years, and are my only income.

So there you are then. I've been down in the basement, now I'm on the way back up again. My mortgage is paid off and I have an emergency fund, so life is good on a pension.

Thanks for popping in. We'll catch up soon.
Toodle pip
Posted by Meanqueen at 20:40