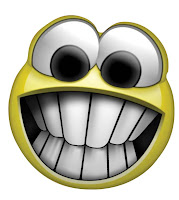 This morning I went to the dentist for my annual check up, and Emma my lovely lady dentist gave a glowing report on the state of my teeth and mouth. These days a good dentist will do a thorough inspection of the whole of the mouth, looking for any signs of dental decay, poor dental hygiene, infections around the tongue or anywhere else, and looking for anything that might need further investigation. Emma asked me all about my teeth cleaning routine, how often, and which toothpaste do I use. I didn't tell her about my experiment with the 30p Value toothpaste, ha ha. She asked do I floss (I do), then said carry on with what you are doing because it works, and gave me a clean bill of health and said come back in a year. YAY :o) I'm chuffed.

Another thing that put a smile on my face today was my combined quarterly gas and electricity bill landing on the doormat. Ok I know it's summer and we shouldn't expect very large bills at this time of the year, but I am always chuffed when the bill is quite small. Cost of electricity is £14.78, and gas is £42.16. With vat at 5% that makes it £58.05. Of course the central heating has not been on at all since earlier in the year, all I use the gas for is cooking on the hob and grill, and a fortnightly bath. Don't worry I am not dead because I don't bath or shower every day, I don't smell because I wash regularly, and as my water is on a meter I save there as well. And think of all the time I am saving by not having to constantly immerse my whole body in water, then dry it off, then clean the bath, and wash all the towels. Win win I say.

Right, what did I do yesterday? And who is this happy chappie in the photo. You never know who you meet in the hills of the Derbyshire Peak District. Haven't the faintest idea what his name is, but he was an everso helpfull Ranger. As you know I met up with Louise yesterday at Crowden on the A628, not far from Glossop. Louise writes this blog  http://roachling.blogspot.co.uk/  it's all about her walks and her photography, she's a very good photographer, worth a look. 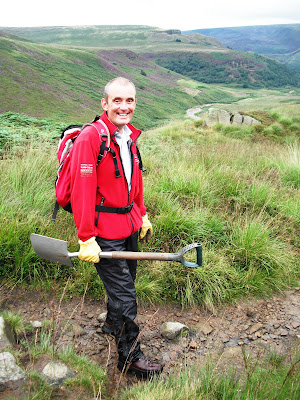 We decided to try one of the walks in the book she brought with her, it seemed like a good idea to go onwards and upwards and get a bit of height for some good views. Not far from the car park is where the Pennine Way takes you up to Black Hill, so we set off in that direction. There was a lot of water gushing down the gulleys and forming big pools on the well worn footpaths, this was making the ground very boggy and tough going at times. Mr Ranger was digging channels to help it on it's way down to the reservoir at the bottom. We stopped to have a sandwich and off he went looking for more pools to dig up. 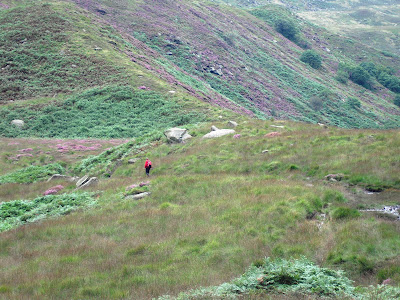 We got so far up and looked back. 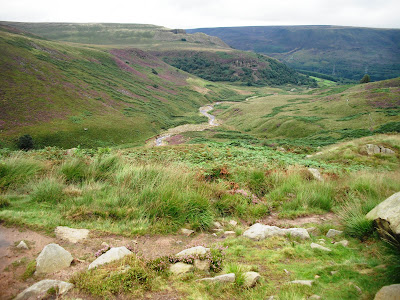 The water was rushing down here in torrents, a bit further upstream we had to cross this. There were a few other people about going in the same direction as us. 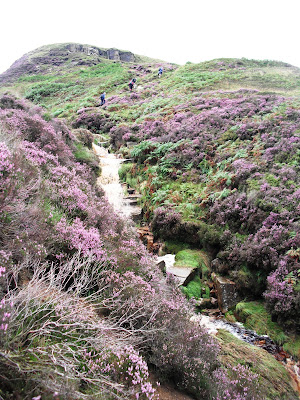 The weather started out pretty fine, but then the clouds came over and threatened a massive storm. Thankfully it was only a little storm but enough to make me put my waterproof trousers and jacket on. It got quite windy when we lost the track a bit, but thankfully our friendly Ranger man wasn't too far away, and he could advise us on which way to go. He knew that place like the back of his hand. I know it sounds daft not being able to find the path of one of the most walked footpaths in Englad, but as he said, the bracken has gone wild this year and in some places it has been up to his shoulders. Also there has been that much rainfall parts of the paths have almost been obliterated. I zoomed in a bit on this photo. 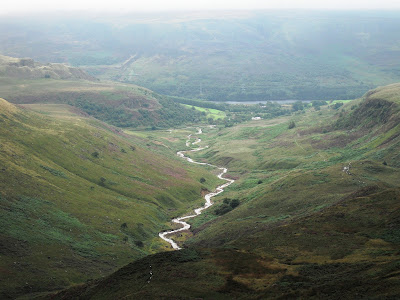 This is the same scene but zoomed out. 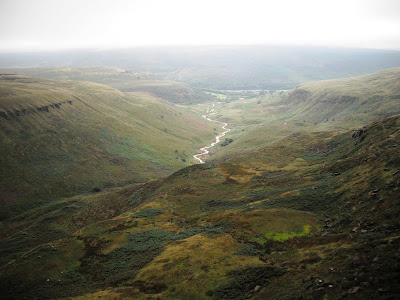 Ha ha, we met the Ranger man again, so I asked him if he would take our photo. He was a very nice man. Almost like having our personal guide as he pointed things out to us and told us a bit of history about the place. You can see the deep ruts in the ground here. 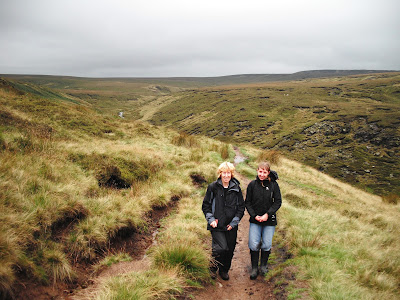 We had intended to go up to Black Hill and come back down another path in a clockwise direction. Ranger man told us that the ground was even more boggy there and the path not so easy to follow, which put me off a bit. Then we came across a deep stream where the stepping stones were completely submerged and the only way across was to paddle through the cascading water. I made the decision to turn round and go back down the way we came. By this time we had been scrambling, staggering, and stumbling through water, bogs, and rocks for nearly three hours, I was yearning for some flat walking.

We got down to the bottom and went in the opposite direction on the Pennine Way which went alongside Torside Reservoir. There are five reservoirs all in a line along this stretch, and several places to cross them. It was such a relief to be able to put one foot in front of the other without having to look down, and the weather brightened up as well which was a bonus. Here we are at The Hollins where the dam seperates Torside from Rhodeswood. I wonder why they made the weir this shape. 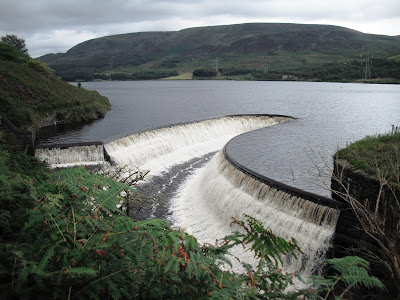 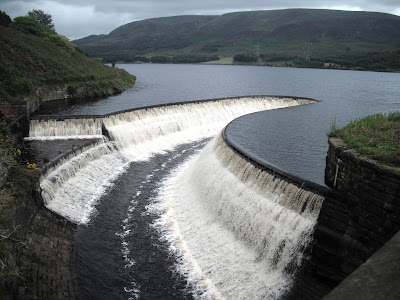 We continued further along on the same side to the next dam. We had intended to follow a dismantled railway line to the next dam along and cross there, but halfway down it we found it hadn't been maintained and it was impossible to continue through the undergrowth. So we turned round and went back and crossed at the previous dam. Now we were on the south bank of the reservoirs and picked up the Trans Pennine Trail which is also the Longdendale Trail. This took us to a few hundred yards past Crowden where we were able to cross back to the north bank via a footbridge.

We came across this woodland, all the young trees had a plaque of rememberance next to them, and there were benches to sit on. There must have been a few hundred trees which have been planted over the years, all in memory of someone who has passed away. What a nice idea. 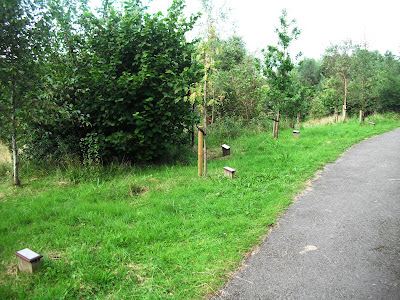 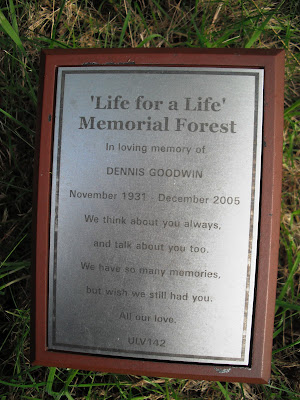 Almost back now. The road at the top of the photo is a sharp bend on the Main A628. The water cascading down what looks like a water slide at a theme park is coming from the Woodhead Reservoir, the first one in the line of five. 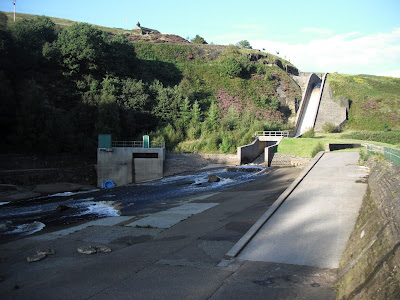 Now you may wonder what this black rabbit is doing wandering loose in the countryside. We thought it was a bit strange too. It was in the car park when we arrived at 9.30am, and it was still there when we got back at 6.30pm. It's anybodys guess how it got there and how long it has been there. Spose it could belong to the Youth Hostel up the road. 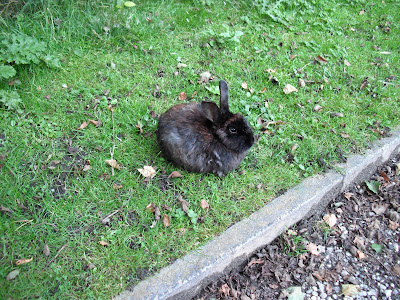 I had a smashing day out with Louise, she is as every bit as nice as she appears on her blog. Thank you Louise, you are great company, I really enjoyed our walk.
Posted by Meanqueen at 18:59