Thank you to everyone for your kind wishes, I really do appreciate it. This is the first time I have lost a pet, you think you can cope, but it has knocked the stuffing out of me. The first night I hardly slept a wink. I had taken Freddie straight from the vet to the pet crematorium and said my goodbyes there. Before this happened I thought I might bury my cats in the garden when the time came, but the ground is hard, and I would be so upset I doubt I could find the strength and courage to go through with it. Also if I moved house I would still be leaving them behind. So I though cremation would be best.
In the spring I will pick a nice day, when the sun shines and the new growth is coming through on the bushes, I will scatter his ashes in the places where he did his territorial spraying, so he will still be doing his duty and scaring the other cats away.
I felt a bit better this morning, after a good nights sleep, so I went off for a walk as it was nice and sunny. My friend told me that someone had taken a vehicle onto the footpath along the top of the woods, between here and the picnic area, and at the point where the water naturally flows down from the fields and into the woods, the ground had been churned up that bad the path was now impassible. I went to have a look.
They had come down from the posh housing estate and flattened the security post on the tarmac snicket, put there to stop youths driving onto the walking area. The size of the tyre tracks made me think it was some kind of dumper truck, definately a four wheel drive vehicle. I followed the tracks to the the water crossing, it was a mess. They had tried to turn round at that point and gouged great deep ruts into the ground, it's a wonder the vehicle didn't turn over.
I was so annoyed that someone had made so much mess on our lovely footpath. A lot of people use this route, it's a very popular picturesque place to walk. I had a bit of time to spare so I set about looking for wood to cover it so that people could get by without too much difficulty. I know where the youths hang out in the woods and went in search of pallets. I found one and dragged it up to the path and along to the swamp. A good scout round the area revealed more wood which I gathered up and threw onto the mud. Nearby is a small stream with some good sized rocks in it, so about twenty of these also landed in the mud.
After about an hour and a half, and covered in mud myself I finally gave up. Several people had come by while I was working and were able to get by. Perhaps someone else might come along and finish the job off. This is my building handiwork, as you can see I never got an engineering degree. 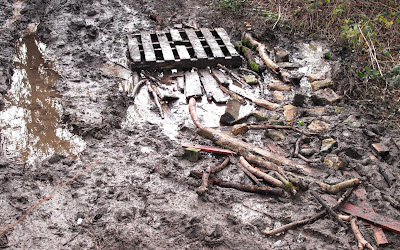 Three hours to midnight. I would like to wish all my blogging friends a
Happy New Year.
I hope all your dreams come true and 2010 brings you lots of
joy and happiness.