There was a lot of seagulls swooping and circling the back garden today, no doubt tempted by the meat and two veg scattered on next doors lawn. My neighbours are avid bird feeders, the leftovers from most of their meals play a big part in feeding the bird population round here. I don't know where these seagulls came from as we are not close to the sea. I can only think they must have been hovering somewhere near the Humber Bridge when their radar system picked up the distinct aroma of roast potatoes.

Every time I see seagulls I always look for one that is flying higher than the rest of them, because this one is special, he is called Jonathan Livingston Seagull. Someone gave me a book about him over thirty years ago, it was written by Richard Bach and was first published in 1970. It is the story of Jonathan who is bored with doing seagully things like following the boats and picking fish out of the sea. He is frustrated with the meaningless materialism and conformity and limitation of the seagull life. He has ambitions, wants to do better things, like flying higher than any other seagull.
He practices every day and stops following the boats, he is missing his meals because he is so driven by his quest for excellence. He becomes skinny through lack of food and his elders are worried for his health, but Jonathan doesn't give in untill he fulfills his goal. His flock turn their backs on him, casting him out of their society. 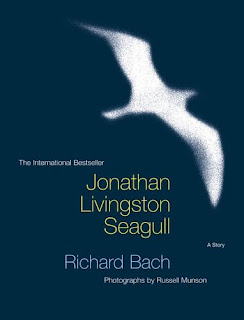 He finds another flock who are all high flyers, and they take him to a higher plane. Eventually Jonathan becomes a master of his craft and passes on his knowledge to younger gulls.
We are all free to soar in our own directions in life.
This is a quote from the book. 'Dont believe what your eyes are telling you. All they show is limitation. Look with your understanding, find out what you already know, and you'll see the way to fly.'
I read this book many times when I was in my twenties, and each time I found something I hadn't seen before. It reminds me that I can be whatever I want to be. I lent my copy of the book to someone and never got it back. Seeing the seagulls today has reminded me to get another one.
Posted by Meanqueen at 20:11