Memories of fun in the snow

I finally got to Tesco this afternoon, it was touch and go after several snow storms this morning. I had a brainwave to defrost the car. It is parked close to the front door so I plugged an extension lead into the kitchen, and put a small portable fan heater inside the car. The windows defrosted in ten minutes and it was warm and snug inside when I set off. My street is always the last one to clear of snow, 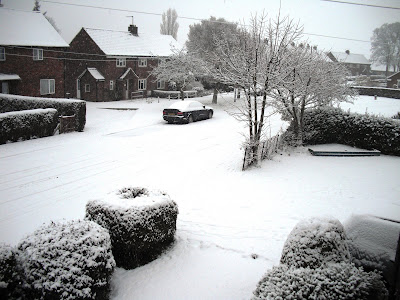 but as I got onto the main road it wasn't too bad. My shopping came to just under £34 in total, including the bargains I picked up at the cash and carry as I was passing. If we get more snow I will be ok for a couple of weeks, maybe three.

I am pleased that I haven't got to take a lorry out in this weather, I can remember some horrendous shenanigans in the snow in years gone by. The biggest problem we had was with the diesel solidifying in the pipework from the tank to the engine. You held your breath everytime you turned the key to fire it up. It coughed and spluttered, then gave up with a big groan. Some of the drivers used to light little bonfires underneath their engine, I was never brave enough to do that, preferring to ring for assistance. It was bliss when they finally added something to the fuel to stop this happening, but we had to scout around to find the fuel stations which had this magic formula in their tanks.
I used to have lots of nights out in my cab, in fact I had one job when I lived in the lorry, only getting home on a Friday night or Saturday morning. There was a particularly cold night when I was on Cardiff lorry park, and I hadn't got a night heater in the cab as they had only recently been invented. Some of my fellow campers thought I was mad to stay in my cab and advised me to get booked into a B & B instead. I said I would be ok. Walking back from the pub with my pals, I was indeed beginning to feel a bit parky and wondered if I should have taken their advice.
One of the drivers suggested I bring my matress and bedding into his cab and sleep across the seats, because he had a night heater. He assured me that I would be perfectly safe, he was sleeping in the pod in the roof, a bit like a loft. At first I declined his offer, then as we got back to the park I changed my mind. I thought sod it, I don't want them to find me frozen to death in my cab. I was lovely and snug, the night heater kept coming on to top up the hot air, by the time morning came I was sweltering. I don't know what the other drivers thought when they saw me carrying my bedding back across the park to my own cab, but I didn't care, he was the perfect gentleman.
I remember one winter, it had been snowing all day on the last day of the school term before the kids broke up for Christmas. I was driving buses for Stevensons Travel and did the school runs, which were mainly in the countryside. Most of the kids were picked up and dropped off outside their houses, some of them quite remote. They never thought of closing the schools early in those days, so at normal finishing time I was there to pick them up.
It was starting to get dark when we turned off the main road down a narrow country lane, the snow was coming down. Up ahead I could see a pair of headlights coming towards us so I eased off the accelerator and slowed down to a crawl. The dozen or so kids I had left on were all near the front of the single decker, I think they were trying to help me to see where we were going. As the headlights got closer it became apparent that the vehicle was as big as my bus, a rigid six wheeler lorry which had stopped. I started to brake but we kept on sliding down the hill towards it. Now we were in trouble.
There was no way I was going to hit that lorry, and the road was not wide enough for us to pass each other, there was only one thing left to do. I shouted to the kids to hold on, and steered into the grassy bank on the left hand side. The back end on the right hand side slid into the other bank and the bus was wedged across the road. The kids thought it was hilarious. We all gathered our belongings and clambered out of the emergency door at the back, and headed off towards the lights of a farmhouse. The kind people allowed the kids to ring their parents to come and collect them. I rang my boss for a breakdown truck, he said, 'Oh no, not another one'. Seems I wasn't the only driver that night to get into a bit of bother. Aaahhhh the memories of my fun in the snow.
Posted by Meanqueen at 17:29