March is always a sad month for me. The 4th was my mothers birthday, she was born in 1918, and the 20th of March 1982 is the day my dear mother died. She was 64 years old and suffered a fatal heart attack. It was such a shock to us, my brother and sister and me.
When I was young she told me stories of her life in Hamburg. She had a comfortable life as a child, her teenage years were happy years, and in her early twenties she married and had a son, she called him Ingo. Her husband was unfaithfull and in those days that meant divorce.
Then came the war and she found herself homeless with a little boy in a pram, most of Hamburg had been flattened. She met my father who was a serving soldier, and came to England to marry him. There was pressure from family members to leave her son with his father to be brought up in the country of his birth, his father had remarried. This must have been a heart breaking decision to make, but as she did not know what she would find in England she thought it best to go along with their wishes. One can only imagine how distraught she might have been, Ingo was four years old.
Mum then had four more children, the last one being a premature baby boy that did not survive. Alas her second marriage was unhappy, she did not get the support she needed from my father, and it ended in divorce. In the beginning there were letters, and photographs of Ingo, arriving from Germany, but they eventually became less frequent and stopped altogether. Her life revolved round us, her three children born here. Although she had very little money, she went without herself so that we were clothed and fed. She had such a hard life, she was a hard working woman who did her very best for us.
In 1981 mum received a telegram from her brother Henry in Hamburg, he had received a phone call from Ingo, asking about his birth mother. He was now 37 and wanted to contact her. Next came a letter from Ingo and over the next few months letters and phone calls passed between mother and son.
A date was set for mum to travel to Germany to meet Ingo, I was to put her on the boat at Harwich, and Ingo was to meet her at Hamburg. She wasn't able to make the journey, she had a heart attack a month before she was due to go. She said she didn't feel well so I called the doctor. I watched him in disbelief as he pounded on her chest with his fist, cracking her ribs in the process. I rang for an ambulance and thankfully the medics came within minutes. They continued resuscitation all the way to the hospital and they managed to save her life.
For several months after she wasn't well. I was writing to Ingo in English and he was writing to me in German. We both had to get our letters translated. I told him that she wouldn't be able to travel, even though she was recovering from the heart attack, she had developed angina. He would have to come here to see her. Ingo wrote to say he would come on the 1st of April 1982, he would fly into Heathrow Airport and I said I would be there to meet him. She died on March 20th, she never saw her son again, and he never saw his mum.
My darling mother, after all this time I am still carrying the pain of your passing, the tears of sadness flow freely from my eyes, on this day every year.
RIP Martha Elizabeth Helen 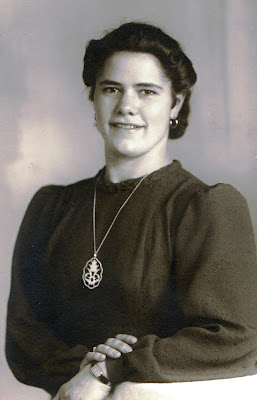