Zero is the bottom line.

A few years ago I started up and ran a couple of small businesses, alongside my full time employment. They were never going to make oodles of money but were fun to do. I imagined myself as an entrepreneur, who knows what could have happened, Dragons Den perhaps. My philosophy was give it a try, you never know what it might lead to.

My first business was an Introduction Agency. There was two ways which people could meet each other, on our social nights out, or through the monthly newsletter. It was very successful in that lots of people made new friends, some leading to permanent relationships, and marriage. My outgoings were mainly advertising and printing costs, I never got paid for my time. It was fun though and gave me a social life. After three years I closed it because it wasn't making money.

The second business was buying cat themed stock from wholesalers, and selling it at craft fairs and cat shows. This worked well for a while and was very popular. I turned my spare room into a small warehouse. My biggest costs were stock, stand rent, and transport to get to the shows. Then sales began to dwindle as people found they did not have the spare cash to spend, so I closed it.

The dictionary describes an entrepreneur as a business person who attempts to make a profit by risk and initiative. Oh I had initiative alright, I'm a get up and go sort of person, but I could not bring myself to risk any money which I didn't already have. To start up I used my savings, I didn't borrow. When money started coming in it was ploughed back in, more stock, and more advertising. I was very cautious, keeping a tight reign on cash flow, scrutinising bank statements and invoices.

My lack of risk taking perhaps showed a lack of confidence in my businesses. I couldn't bring myself to throw money at them in the hope of recouping it later. The risk was too great. I now realise I am never going to be an entrepreneur.

Being money savvy has served me well though in my personal life. My bank statements are checked every month and are filed. 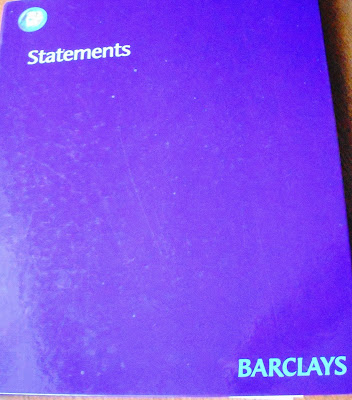 They go back to the year 2000. The amount of information in here is invaluable. 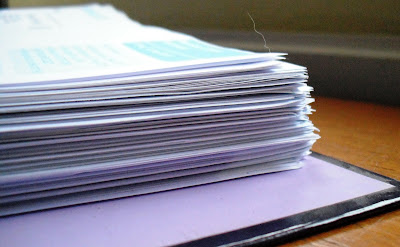 I can check how much I have earnt, and how much I have paid out. I can compare month by month, year by year. For instance the lowest my account has ever been was £28.06 on the 16th April 2003. I really was hanging by the skin of my teeth there, but the very next day my wages of £252.41 went in, phew that was close.

To help me keep track of things I keep my direct debits to a minimum. I do not want money to disappear, I want to physically pay for things with a cheque or cash. The monthly direct debits I have at the moment are mortgage, house insurance, broadband, and homephone. I have one annual payment to the RAC, and that is all.

My car insurance is paid annually, I save up for it and pay on the phone with my Tesco credit card to get the points. Gas and electricity are paid quarterly when the bill arrives, with a cheque into the bank. Water and sewer charges are paid twice yearly into the bank with a cheque. Council tax is paid with cash into the office in town. Mobile phone is PAYG top up, £10 every 2 or 3 months. I use my Tesco credit card 3 or 4 times a month for food and petrol and other odd purchases, it is always cleared in full every month.

There has been a lot in the press about how banks rip customers off, Barclays don't get chance to rip me off because I don't let them. In 2008 they wrote to me saying I could claim a personal reserve on my account, of £500. If I didn't want it I had to contact them. I read the small print. If I go into the reserve I had to pay a usage fee of £22 for the first five consecutive days. If I am still using it after that another £22 was payable for the next five days. I politely told them where to stuff it. I have never had an overdraft in my life, and I am not about to start now.

What they were really hoping for is that people wouldn't bother to opt out, then at a later date the temptation to dip into it would be too great and people would give in. They were trading on people's lack of will power. Some might argue that it could be helpfull to have access to a little bit of extra cash, in case of an emergency, but I disagree. The bottom line of your bank balance, the actual cash you have in the bank, should be the cut off point to stop spending, not the little bit extra they want to throw at you. When the balance reaches a certain level, then is the time to act, not when every last penny has gone.

I know what I need to pay out every month, I read my statements. When the balance starts dropping I know I have to stop spending. I have never missed a morgage payment, and all bills are paid on time. In the past I might have had to roll over a credit card by only paying the minimum, but I always had another trick up my sleeve. Get a nought percent card and transfer the balance to give me an extra few months. I don't need to do that now, I'm down to the one card, that's enough for me.

If you want to dig yourself out of a hole read your statements, they can tell you a lot about yourself. Mine tell me that I have never been a long term saver. I only have the one account, nothing is squirrelled away anywhere. I always keep a small emergency fund, and the money in and money out has to balance.
Posted by Meanqueen at 10:01