Eyam to Stoney Middleton and back

Well here we are then, I've arrived at Eyam Youth Hostel around lunchtime on Wednesday. Eyam is pronounced Eem, as Louise so rightly pointed out, thank you, I didn't know till I got there. After I booked in I went a walk round the village. Hostels don't usually open till 5pm, but I spotted the warden having a crafty ciggie outside so she let me in to use the lavvie and show me my room. Yes, my room, no one else to share with :o) 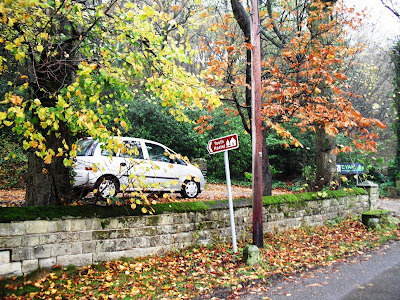 The hostel is high on the hillside above the village, on this map it's dead centre just below the words 'at a'. I walked along the road but later on as I was coming back I used the footpath just left of those trees. 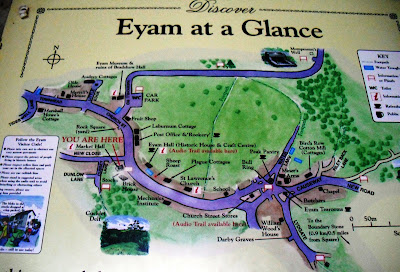 Sadly the museum was closed so I couldn't take a look inside. 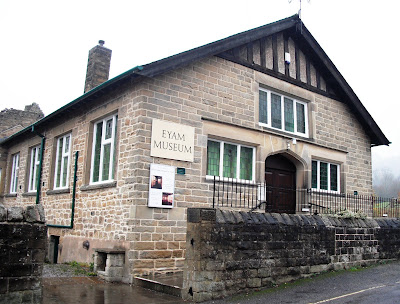 Here is another information board, very colourful, and very interesting 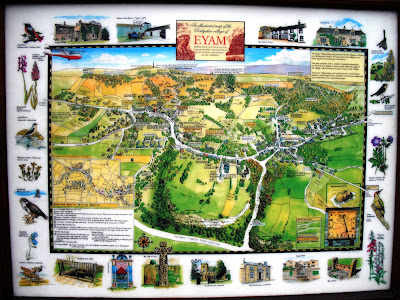 This is Eyam Hall, closed for the winter. 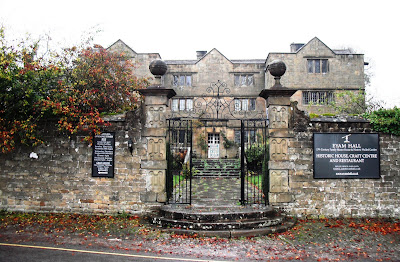 Another board telling of the plague. 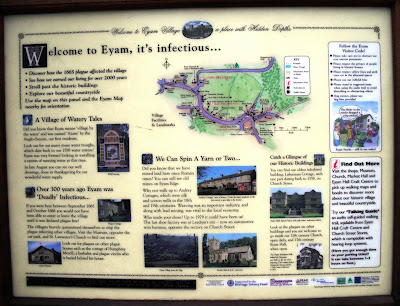 All around the village are plaques telling of who lived there and who died. The plague started in September 1665 and finished in November 1666. During that time 260 people died. The cause of it was a bundle of cotton fabric which was sent from London, it contained a deadly disease, the Bubonic Plague. The villagers decided to go into self imposed quarantine, no one to leave and no one to be allowed in. Around the boundary were places marked by large stones. These were where they left money, and people came from other villages to leave food for them. 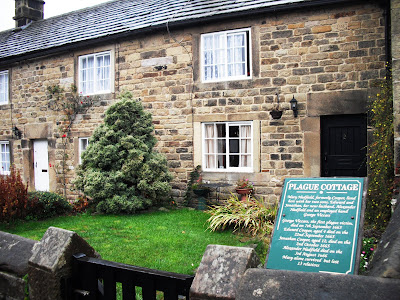 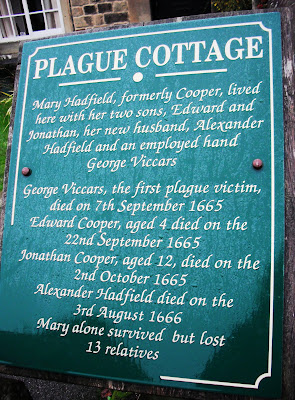 The Celtic Cross in the churchyard from the 8th Century. 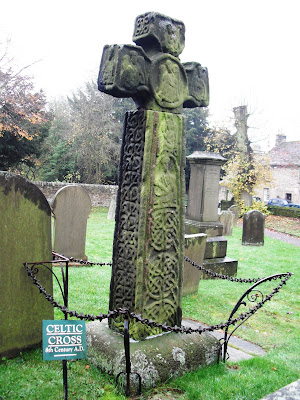 The Country Store with it's veg barrow on the front. 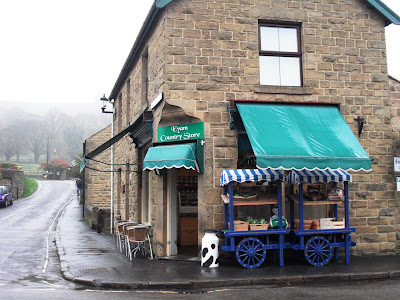 This is the centre of the village. There isn't much traffic so it's easy to walk around without having to hop out of the way of cars. 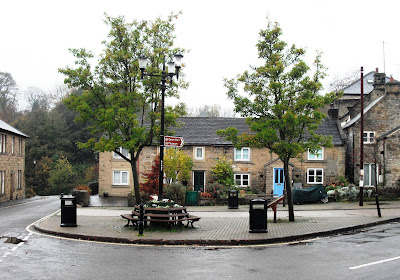 This was a popular place, a tea shop and bakery. People were calling in for their bags of sandwiches and cakes. 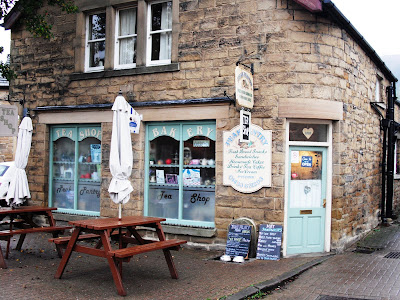 The tea rooms look inviting, but it was a shame about the property next door. To the right is a house with what looked like a junk yard out front. There were rickety tables with dozens of pots with dying plants for sale on them. To be honest it looked like a bit of an eyesore so I cut it out of the photo. 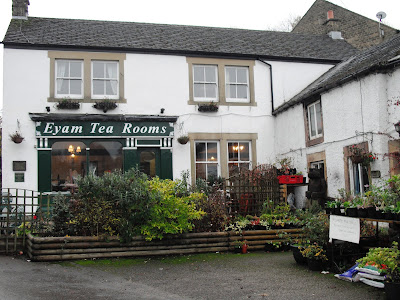 This house plaque caught my eye, very pretty, with a black cat in the centre. 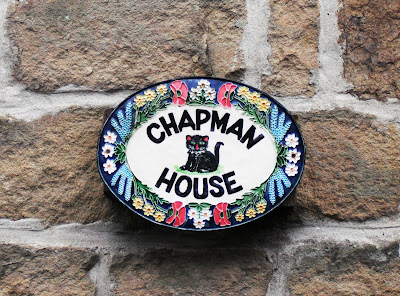 After looking round Eyam I headed off down a track towards Stoney Middleton. It has an unusual Octagonal shaped church. St Martins was built in 1759, it's the second church to be built on this site. 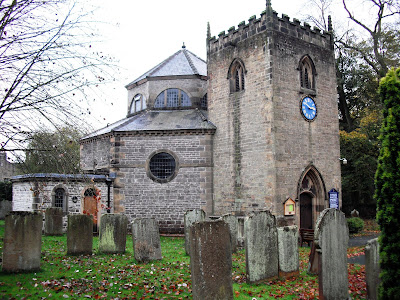 All the seating is aranged around outside walls, not in rows like most churches. 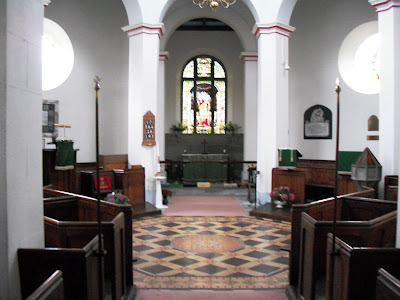 I was intrigued by this white fungus type coating which I saw in several places. It seems to be sticking to the grass but hasn't been thrown there. I wonder what it is? Perhaps someone knows. 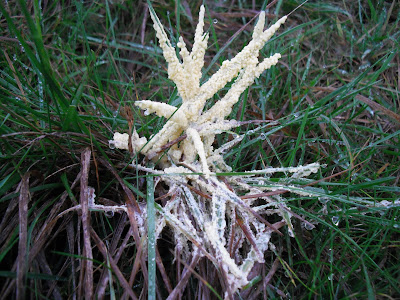 It was getting on for five o clock when I climbed up the hill towards the hostel. The lights were starting to go on in the village, and the mist was coming down. Visibility hadn't been very good all day, but not to worry, at least it didn't rain on me. 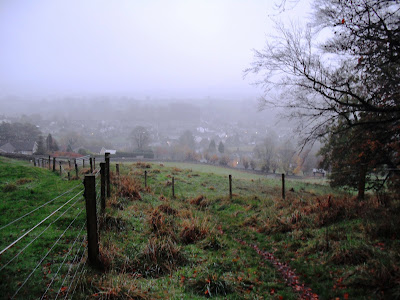 Here I am back at the hostel. Doesn't it look impressive. I couldn't get the whole building in the photo because if I'd have stepped back I would have fallen down the hill, and it was surrounded by woodland. 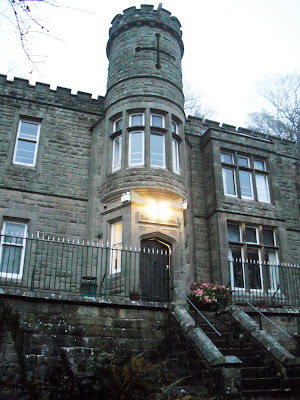 After my dinner, a microwaved bowl of home made veggie stew, I had a natter with the warden who was sat in the TV lounge. I had seen a board up at the Engineers Institute advertising a Bingo night in aid of the Poppy Appeal, so I got in the car and drove myself down there. I didn't fancy scrambling along the footpath in the dark.

The ladies inside made me very welcome, and someone came around selling the cards. I got a strip of six cards in a book like everyone else. I haven't played bingo for donkeys years, mainly because I find it pretty boring, and I can't stand the suspense when I am waiting for one number. But tonight I thought it might be a good way to pass a couple of hours.

There was a couple of tapestries in the hall, beautifully hand sewn by various members of the community. I have often seen this type of thing in most of the village halls I have been in, when I have given my talk to WI groups. 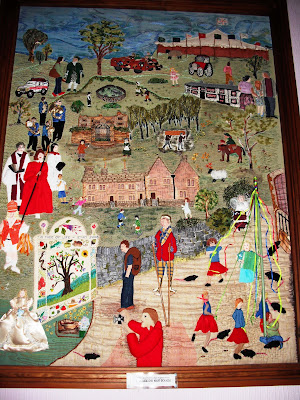 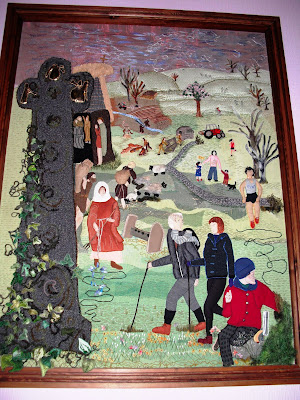 The bingo got underway and I was larking about as I usually do. I was worried that I might not be able to keep up, but the caller went at a nice steady pace so that was ok. I imagined what I would shout if I got a line up or a full house. I thought everyone would shout Bingo, but they didn't just a quiet murmur, they didn't seem at all excited to win.

It cost £3 for the tickets, then at half time they came round and sold more tickets for £1.80. Everyone had some so I did as well. The cup of coffee and a biscuit was 20p. So altogether it was £5. 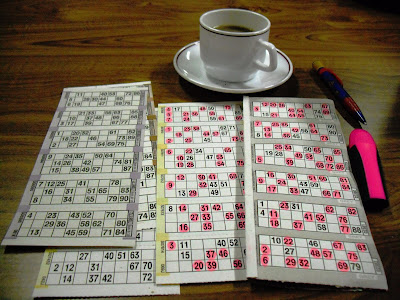 Eyes down clickety click, legs eleven and all that. I was disappointed that there was no funny little quips when she called the numbers, just 1 and 2, number 12, 3 and 7, 37. By the time we were two thirds of the way through it I was getting fed up, oh bugger only wanted one number. 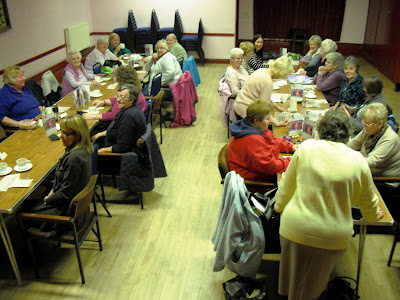 Then right on the last card, the second to last game, we had to get two lines to win, and I was waiting for one number. I listened carefully and sighed every time it wasn't my number. Then she called 4 and 0 number 40. Well I nearly fell off my chair I squeeled that loud. the whole place was in uproar with laughing. This is my prize, a bottle of champers. Wow, was I pleased, it made my night. I know it's not the dead expensive stuff, but it will make a nice treat, now who shall I share it with :o)) 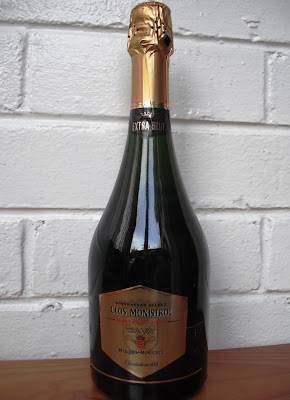