What a blustery old day it has been today. I haven't ventured far, pottering around in my many layers topped with a fleece dressing gown. I popped round to Sue's to pick up some stock for our sale tomorrow, it had to be sorted out, what we thought might sell, price it up, and leave behind anything which we won't be able to fit on the table. Janet came round with more stuff, and between us we got the job done. I think it will be mainly children spending their pocket money so we have priced accordingly. There will be some mum's around so a few things to appeal to them. You really don't know what will sell, or for how much. We can but try.

The electric and gas bill landed on the door mat this morning, I expected it about a week ago so I rang Brittish Gas yesterday to find out where it was. In the post they said. I like to pay bills on time, and if it had got lost I would have been penalised for paying late.

Anyway, it's not too bad. The gas part of it is very low as expected, I have hardly used any, but there has been a bit of an increase in my electricity consumption. I had extra lights on and the radio on a bit more, for the rescue pussies in my care. Comparing it to the previous bill I see the cost per KWh also went up, so that hasn't helped. I really must cut down my computer use, it's costing too much. I have the awful habit of leaving it on all day, and popping back now and then between jobs. But then again, I save in other ways, not using other electrical appliances unless absolutely necessary.

A couple of pics of Elmo have been sent to us, from his new owners. They absolutely adore him, he is a lucky puss to have a lovely new home. Look at his smart new collar. 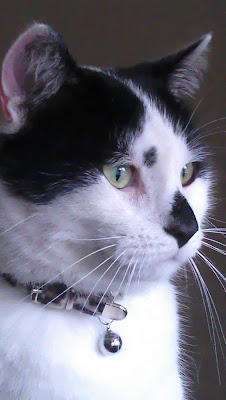 I wonder if this Christmas tree is still standing, those baubles look very tempting. He is thinking, 'I wonder if I can climb to the top of that', ha ha. 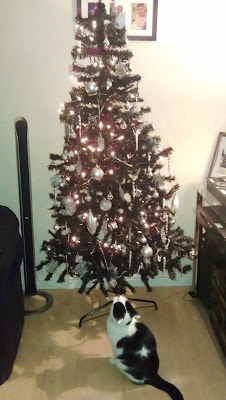 Rehoming has slowed up a bit now, I suppose people have other things on their mind, like what are we doing for Christmas. Now is not a good time for rehoming anyway, too much going on with decorations and going out to party. You can't put a nervous cat into all that mayhem. We keep getting phone calls from people wanting to off load their cats onto us, but we have to keep saying no because we are full up. Someone asked if we can take 12 kittens, two seperate litters, why the heck don't they get them neutered, people are so irresponsible. Anyway, we do our best that's all we can do. Toodle pip.
Posted by Meanqueen at 18:01