Getting to grips with rugby

Good afternoon, the snow is starting to melt, yipeeeeeee :o) I felt a bit dog rough when I woke up this morning, is this a mini hangover I wondered, hhmm, don't know how that has happened. Surely I can drink two pints of cider without any ill effects, seems not, unless someone spiked my drinks. A quick dash to the lavvy was necessary, flippin heck, my head was fuzzy.

I had forgotten I was due to go out last night. In the afternoon I took Rocky dog a walk, then popped across the road to have a natter with my friend Barry. He was watching rugby on the tele, England v Italy, playing at Rome. I kept glancing across at it in between talking, and I noticed how hunky the Italians are. Italian stallion came to mind, ha ha, I like a beefy man. They were charging about getting all sweaty, the steam was coming off them in the cold air. Couldn't take my eyes off them.

Now I know nothing about rugby, except they use a funny shaped ball, and they have big punch ups on the pitch. Well not quite that violent but there is a lot of throwing themselves on top of each other in a big pile. Barry explained what was going on and how they score the points. In the beginning England was in front, then Italy had a run of good luck and took the lead. It looked as if we were on the way to losing. Then there was a clever intervention and England took the lead again. This gave the team a big confidence boost and they went on to score again and keep hold of the lead. Yay, good old England we won.

Bye this time I was hungry so it was home for dinner. Just as I sat down to eat the phone rang, it was Julie, ringing to confirm our meet up time in the local pub. Oh heck, I had completely forgotten about that. I am just not used to going out at night. We agreed on 8.15pm. I am also not used to spending hours getting ready, so it's just a quick splash in the bathroom, a quick splodge of roll on deodorant under the armpits, and change of clothes. That's it, don't do make up, fancy hair do's, ha ha.

It was a lovely night, we had a couple of drinks and a natter, then more friends of Julie's came in, they were celebrating a 70th birthday. It ended up quite a friendly party, it was nice to socialise with people from the village and meet new people, catch up on who's doing what. Someone asked if I wanted a drink, I should have said no, or gone onto fruit juice, but I said yes please, I'll have another half of cider. It was my fourth glass so I should have been alright.

However, I did find myself rambling on and on to anyone who would listen, as the alcohol loosened my tongue even more. I could feel myself playing to an audience again, stories came into my head which had to be told. One man kept pigeons so that was a cue to recall a story about a man I met from Reading, who had photographs of his pigeons all over his house. A night I shall not forget in a hurry, don't ask, ha ha.

Anyway, just like Cinderella, Julie and me were ready to go home, the crowd were going on to someones house to continue the party. We were invited but we both felt we were ready for our beds. Besides, I think everyone had had enough of me, there's nothing worse than a boring drunk, ha ha.

I don't think my body can tolerate alcohol any more. I only had two pints, I used to be able to sink four or five in one night. Years ago it was fun to get a bit tiddly, now I hate it when my brain becomes befuddled through booze. In fact I have cut it right down because I like to be in full control of my faculties. My only intake these days is one can of cider every two or three weeks, and the ocassional bottle of wine which lasts three days. Last night was an exception, I wont be repeating it. I think it's best if I only have fruit juice if I go in a pub again.

Anyway you will be pleased to know that my mini hangover didn't last very long. After a mug of coffee and a bowl of bran flakes I felt a whole lot better.

Here's a little bit of fun for you, no prizes. Can you guess what this is. Sorry the pic is a bit fuzzy, I took it this morning, ha ha. 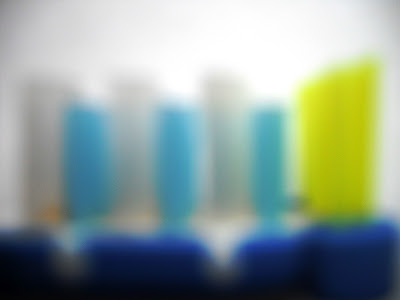